Sometimes you find a pleasant surprise and that is what happened when we found Caldwell Family Winery & Vineyards. We first came across their name and website over a month ago and were surprised they were located right in Houston. We thought we had heard of every local winery. I emailed the contact, Chris Caldwell, which the website listed as Proprietor & Winemaker. Chris replied shortly and we began an email conversation.

Chris explained they use Vintners Own to produce their wine. Vintners Own is a bonded Texas winery that focuses on private label California varietals and maintains a commercial facility in Houston. When he established the winery in 2010, his choice was to either develop a winery and tasting room on land in the Hill Country or to concentrate on the production of quality wine first and then build a facility. He chose the latter. He invited us to come and visit the winery any time.

Vacations and other events took place and we finally got a chance to get in touch with Chris again to arrange a time to visit. He said they would be bottling some red wine and invited us to come and watch. We have never seen a bottling before so we readily agreed to come.

Caldwell Family Winery & Vineyards produces some wines using California grapes but also produces white wines using Texas grapes. Chris gets his Texas grapes from Reddy Vineyards in Lubbock. Many Texas wineries, including big names like Becker Vineyards, get some of their grapes from Reddy Vineyards. Caldwell Family Winery & Vineyards produced a 2010 Texas Muscat Blanc which was a 2011 Houston Rodeo Gold Medal winner. Being fans of Muscat Canelli, we were anxious to try this Muscat.

We arrived at Vintners Own and were directed to the rear of the facility where we met Chris and others already bottling wine. He welcomed us and gave us a brief introduction to the bottling process. He said they would take a break a little later and then he would be glad to give us a tour of the facility. 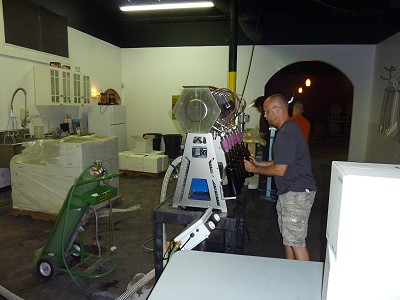 The bottling process is fairly simple and it starts with getting the empty wine bottles. The machine used to fill the bottles with wine can fill six bottles at a time. The bottles are first inserted into a machine that inserts argon gas into the bottles. As is commonly known, air which contains oxygen is not good for wine after a bottle is opened. Argon gas is 2.5 times heavier than oxygen and when inserted into a bottle, the much denser argon lays directly on the surface of the wine creating a barrier between the much lighter oxygen and the wine surface. After the bottles are filled, corks are inserted, foil put on the neck of the bottle, and then heat-shrunk to seal the foil to the bottle. The final step is to label the bottle but Chris was not doing that at this time. He bottles the wines about one month before their release.

The wine which was being bottled when we arrived was 2009 Eaglefire Napa Valley Cabernet Sauvignon which includes 75% Cabernet Sauvignon and 25% Syrah. We watched the process for a while and decided we would volunteer our services. Chris readily accepted and Gloria and I took over the filling of the bottles. I handled the argon gas and inserting the bottles to be filled while Gloria removed the bottles when they were full and transferred them to the corking area. I do believe we got the steps down pretty smoothly and eventually became like a well-oiled machine. 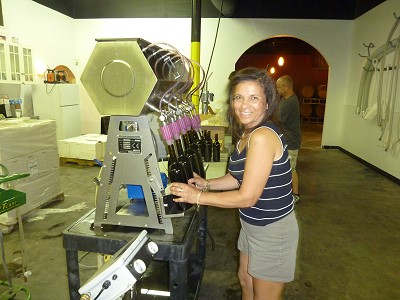 Gloria takes her turn at filling

As the bottling was happening, other visitors for Chris arrived. Some of the visitors took over the rest of the steps and soon Chris was in supervision mode. Smart man. Other people arrived and started going into a room nearby which had been set up for some kind of party. We learned that events like wine releases are held there.

We all finished bottling the Cabernet and got to taste the wine we had just helped bottle. Gloria and I are primarily white wine drinkers but the Cabernet was very good. We were definitely impressed and would have been very happy drinking a bottle of the wine.

Chris then took us and a couple other visitors on a little tour of the facility. We learned that Chris uses French oak barrels for the red wines. He buys both new barrels and recouped barrels. We had not heard of recouped barrels. Chris explained there is a company in California which takes used barrels and shaves the interior of the barrel to ensure all wine-penetrated wood is removed while maintaining the wood’s integrity. This allows the wood to once again contribute its flavor to the wine being stored.

We went into a large chilled room where oak barrels and other wine is stored. Chris let us sample from one of his barrels which was a blend of 100% Texas grapes including Cabernet Sauvignon, Cabernet Franc, and Petite Sirah. He said he would like to wait until next spring to bottle it, but it will probably be ready at the end of this year. The main goal is to stabilize the pH level of the wine but of course the taste matters too. Chris doesn’t like using sulfites in his wine but he had to last year since the pH was high. The nice thing is Chris does not hide whether his wines are made with California or Texas grapes, and his eventual goal is to only use Texas grapes.

While we were taking our tour, the other people who were bottling were getting the process set up for the next bottling run which had a slightly different sized bottle. The next wine was going to be called 2009 Eaglefire Napa Valley Reserve Blend and was a blend of 50% Cabernet Sauvignon, 40% Merlot, and 10% Petite Sirah.

The other two visitors from the tour wanted to try their hand at filling the bottles so we let them take over. Since Chris knew we were interested in the Gold Medal winner Muscat Blanc, he opened a bottle and let everybody have some. He said it was 100% Muscat Canelli but the French name is Muscat Blanc. It may be redundant, but once again we were very impressed. Chris’s decision of making quality wine first was definitely coming to fruition. 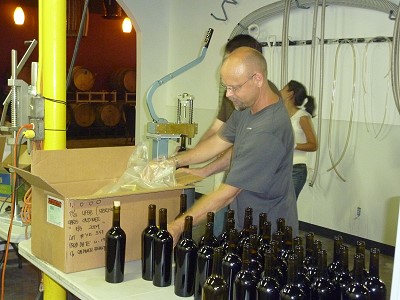 Caldwell Family Winery & Vineyards produced 1500 cases of wine in 2010 and this year will probably be the same. There is real estate in the family which is on the frontage of Highway 290 near Fredericksburg and popular wineries. Chris may be ready to start working on a facility there next year. He said he really enjoys making wine instead of drinking, but of course he enjoys drinking it too.

The two visitors filling bottles were getting tired so we took over the filling duties again and soon got up to our previous speed. We learned from Simon, a winemaker at Vintners Own, that approximately 600 bottles had been completed in two hours. After the second run was complete, we tasted the Reserve Blend and it was time for us to leave.

We actually had fun helping with the bottling and look forward to helping again in the future. One thing we learned from the evening is Caldwell Family Winery & Vineyards is a name you should remember because you will be hearing about them in the future.

This is great! I’ve been dreaming to have my own vineyard. Great job you guys!