Ste. Genevieve Winery / Mesa Vineyards is located about 27 miles east of Fort Stockton. It is the largest winery in Texas and the 24th to 26th largest winery in the United States. Outside of California, one winery in Washington which is larger is Ste. Michelle Wine Estates who has multiple wineries in their portfolio including Columbia Crest.

Ste. Genevieve used to offer tours at the winery but since it is isolated and largely a commercial business with no romantic feel, which a lot of people associate with a winery, tours were stopped. After that it was decided there was no need to even have a sign outside with their name. If you pass the very large three story building driving down I-10, you would think it was just another business, perhaps a plant of some kind. But behind those doors is where 600,000 cases of wine are produced a year. 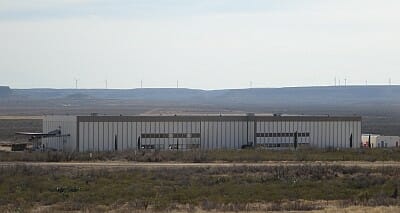 In June 2005, the winery and vineyard were bought by a group under the name of Mesa Vineyards when Pat Prendergast became the owner and president of Ste. Genevieve Winery and Mesa Vineyards.

I made arrangements to meet Pat at the winery for a tour. The winery is easy to find because at the exit on I-10, it’s the only building to be found and with the size of it, it cannot definitely not be missed. A small lobby is the only thing visible when you first enter the winery. I was expecting perhaps a receptionist, but the winery obviously does not expect visitors. There was a sign with the laboratory through one door and the executive offices upstairs. I took a chance and headed upstairs where I soon came upon Pat’s office.

After introductions were done, we soon started on a tour and the first visit was the next office where fortunately winemaker Bénédicte Rhyne was sitting. I say fortunately because Bénédicte lives in Fredericksburg and she was leaving the winery soon to head back home. 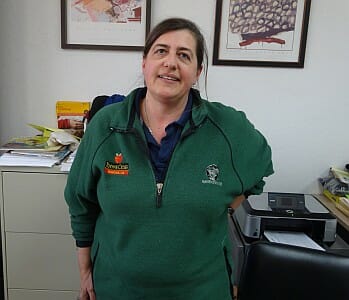 We went downstairs and stopped in the laboratory. The lab is also used for tasting since it is a clean environment. They have a rule when they blind test their wine versus the competition they have to be in the top two of whatever they taste for the wines which are sold one dollar above them. Most of the time they are. When they are not, they try to figure out why they are not and what they have to do to fix it. 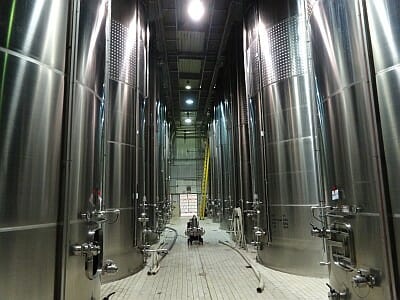 Next up was a room with large 27,000 (technically 26,980) gallon tanks. Pat counted 28 of those tanks in the one room. The room is currently used mainly as a storage room. Most of the time they store partial blends of wine there.

The big bottling line came next. The line bottles only the 1.5 liter bottles and the line runs about four days a week at ten hours a day. The line is mostly automated including a palletizer at the end which circles around with the cases stacked getting shrink wrapped. The one bottling line does 3,800 cases a day even though it could handle about 4,000 cases. If they do two bottle types a day, they cut down the quantity to 3,600 cases a day. Gloria and I have helped wineries bottle before but those wineries have their wines being fed into the bottler from Flextanks. Ste. Genevieve has two 3,700 gallon tanks to feed their bottling line! 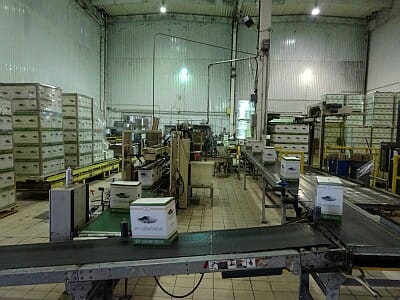 80% of Ste. Genevieve’s volume is 1.5 liter bottles. The main bottling line is capable of doing 750ml bottles but since the line is older, they keep it doing the one size and hence do not have to keep changing it which also helps increases its life. Pat said he plans on changing the line out in about two years and move it to another location.

One thing Ste. Genevieve does when bottling is to take three bottles off the line every hour. One bottle they use to analyze. Another is used for plating which is a system of putting the wine through a filter, then putting the plated wine through a humidifier which is like a little oven. After three days it tells if the wine is perfectly clear or if any yeast got through so they know it is able to ship. The third bottle they keep in their inventory for about 18 months in case they need to go back and refer to what they did.

It was a pleasure to see as Pat walked through the winery he would greet people wishing them Happy New Year and checking to see how their holidays went. Maybe to me it was interesting to see since I come from a large corporate environment where we hardly see any executives who know us, let alone the owner or CEO. It also could help since Ste. Genevieve has only 41 employees.

“In premium Texas, we sell a lot of wine in a premium Texas wine category that people wouldn’t automatically think that we do as you have seen in the stores by turning the bottles around. We do a lot of this as a control label. Like Lost Maples is an exclusive to HEB. And then we have one at Spec’s called 5 Point. We have one at Kroger called 1836. We also have one at Goody Goody which is mainly in Dallas called Escondido Valley. We had one that was in and out of Sam’s Club called Big Star. Brix was a brand we don’t sell anymore. Shadow Brook is a brand we sell only to restaurants. L’Orval is sold at Spec’s, restaurants, and big military bases. 15 years ago it was found at most retailers in Texas.”

The Mesa Vineyards label is sold only out of the tasting room. More on that later. This year for the first time they will be doing a Rosé which will be going into HEB as a Lost Maples. They will also be doing a high-end Syrah and Sauvignon Blanc, and all these wines will come from their estate vineyard.

As we walked by the stacked palettes of wine, Pat said the finished goods inventory will usually only keep about 45 days so the bottled inventory turns over every 6 to 8 weeks.

A lot of the Ste. Genevieve labeled wines have Texas fruit in them but some do not and the ones which do have a low portion of Texas fruit in them. They get the remainder from California, South Africa, and Chile. They even buy some wine from France.

Speaking of Chardonnay, Ste. Genevieve’s best-selling wine is Chardonnay. Their second best is their Red which is really a blend. Third is their Sweet Red followed by Cabernet, Pinot Grigio, Merlot, and Muscat Canelli. 80% of their sales are in Texas but their next biggest selling state is Florida.

Pat then guided me to the other side of the building where we first entered a cold room with 16,000 gallon tanks. They keep very finicky wines in there like Sauvignon Blanc and Pinot Grigio which are more delicate. They can also use the room to cold stabilize the wines. Pat said since there are so many more methods to cold stabilize these days, they do not use the cold storage room for cold stabilization as much as they use it for storing the delicate wines. 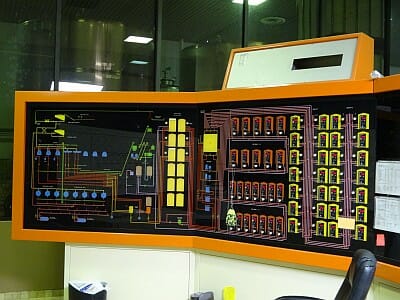 Outside the cold room was a glassed in monitoring control station which shows every tank and temperature. From some movies I have seen, it looks similar to a subway monitoring station.

Next was another large room with more 27,000 gallon tanks. The room could be used as a cold room like the previous tank room but it is not currently used that way. In total they have 39 of the 26,980 gallon tanks in total.

The last large room in the winery is what Ste. Genevieve calls the harvest room. This room has the crush pad located outside and the fermentation tanks are located there. They actually have two crush pads but currently only use one.

Rotary presses are another piece of equipment which is unique in Texas. By rotating the press, they are not pushing the grapes as bladder presses do, but the weight of the grapes falling on the sides extracts the juice very delicately and hence they do not get a lot of tannins. The quality of the juice coming out of the rotary presses is very high. They can also use them as rotary fermenters and actually ferment the juice in them. They also have traditional presses which are not exactly like bladder presses but use the same concept. Instead of having a bladder in the press there are slats which expand crushing the grapes. They do use both types of presses. White grapes are pressed right away. Red grapes go to the fermenters and when they are done they go to the presses. 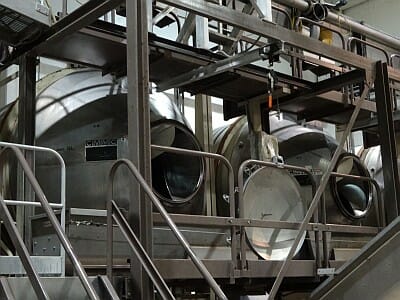 Pat talked about the freshness of wine by explaining, “One of the big myths in the wine business which a lot of people think is that all wine gets better with age. 99% of the wine gets worse with age. Freshness is a key conveyor of quality. But if we say to the consumer that Ste. Genevieve is fresh and because we’re in Texas, people would think automatically that we’re inferior. But they just know that this wine has more fruit, and it’s softer in the finish with a better balance. All that is a function of freshness but they wouldn’t connect that.”

Having finished a tour of the winery, Pat then wanted to show me the vineyard.

The next post will be about Ste. Genevieve’s vineyard and tasting room. Read Part 2.