One of the best things about Texas wines besides visiting Texas wineries is drinking the wine and especially enjoying the Texas wine with other people. This post is about two events we attended this past weekend which hold true to that principle.

You may have read about our recent experience in bottling wines at Caldwell Family Winery & Vineyards. Chris Caldwell told us at the time he would be having a release party and we were hoping we would be invited. After all, we helped bottle two of the wines.

We did get our invitation along with quite a few other people. According to the tasting menu sent in advance, there would be free white and red wine flights with two wines each. You could also purchase an Eaglefire wine by the glass or bottle. A silent auction would also be held for a 6 liter magnum of their 2010 Eaglefire Muscat Blanc, which was a 2010 Houston Rodeo International Wine Competition Gold Medal winner.

The release party started at 6:30pm on Friday and we arrived around 20 minutes later. We didn’t know what to do since it was our first release party, so we ended up standing around until Chris Caldwell saw us and welcomed us. As we learned, it was their first release party too. A table was on the side with bread, cheese, and pita chips which Gloria fell in love with. At the rear of the room was the tasting table where Chris’s wife Yoli was doing the pouring. 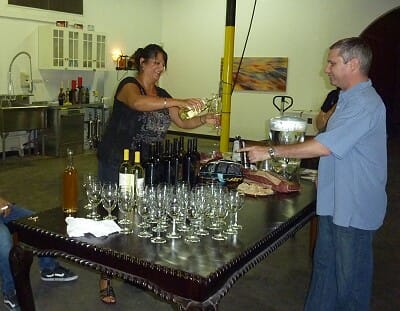 We started with the white of course and had the Muscat Blanc which we had previously bought and loved. Since we didn’t know anybody else at the party, we stood around looking for someone for which to start a conversation. While doing so we moved on to the next white wine, their Blanc du Bois, another Texas wine. They also had a mead wine which had previously been made but never sold which was actually pretty good. 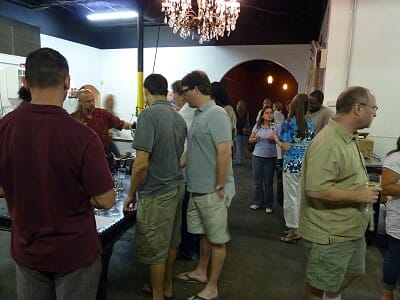 After we finished the two flights of wine, we decided on a glass each. My glass was poured and it was a very generous glass. One guy who was standing nearby said, “I want one of those too!” He looked like fun so I made a note to try and talk to him and his partner later.

We then headed to the table which had the silent auction items. One was the aforementioned 6 liter magnum and the other two were cases of wine. The labels from the Caldwell Family Winery & Vineyards white wines are actually from art drawn by Chris Caldwell’s children. The art was behind the silent auction table so it was fun seeing what inspired the actual label. 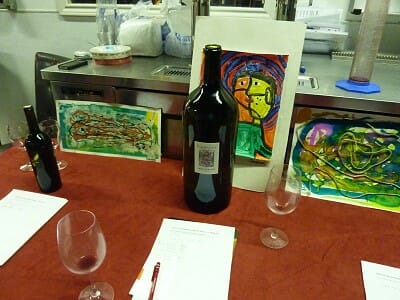 There was already one bid on the 6 liter bottle so I was prodded by Gloria to bid higher which I did. We would occasionally check back through the night and raise the bid.

I saw the opportunity to speak to the guy who made the generous glass comment and I’m glad I did. His name was Steven and his girlfriend is Amanda. It turns out that Steven is a sommelier and will be general manager of a restaurant opening on July 18th in Houston: Sorrel Urban Bistro. Note: unpaid plug. Besides having daily fresh fruits and vegetables, they will offer Texas wines. That news piqued our interest. Steven will be serving some Caldwell Family Winery wine in addition to some other Texas wines. We had a great conversation with Steven and Amanda during the night and promised we would definitely visit the new restaurant.

We went to visit the silent auction table again and my name was still the high bidder. Steven said the bottle would look great in his restaurant so I urged him to bid higher so he could get it, but he didn’t. As it turns out, the magnum was one of two bottles Caldwell Family Winery produced and that Gold Medal winning Texas wine was their first commercial wine. 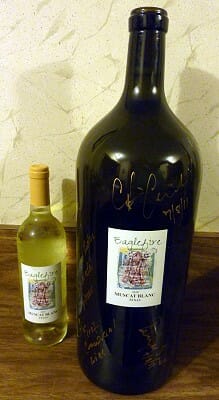 While standing at the table, Chris Caldwell’s partner, Doug Webb, arrived who unfortunately arrived late because he had to be with someone at the hospital. His wife was helping Chris’s wife pour wine and we learned they have nine children.

Chris introduced us to Doug and they are both excited to start thinking about building the tasting room in Fredericksburg where the family owns 82 acres across from Grape Creek Vineyards. The plan is to start with the tasting room, then an underground cellar while production is still done in Houston, and then move production of their wine there. As mentioned in our previous blog post, Chris is insistent on eventually getting to 100% Texas wine. Doug said he was hoping to run the tasting room as that is where his previous experience would be helpful. Chris was really happy with the night saying they may have more investors lined up which will make opening the tasting room even more possible.

During the evening we also met Fritz Westover, who is the viticulture advisor for the Texas Gulf Coast region which includes the areas east of Austin and south of Tyler. In simple terms, he helps people with their vineyards. He and Chris were excited about a palette of Blanc du Bois grapes which had just come in and we got to taste a grape. It tasted like a regular grape to us so it is impressive what a winemaker can do with them.

The release party was supposed to finish at 9:30pm but we ended up closing it down with a few other people at 10:30pm. Oh, and I couldn’t convince anybody else to bid on that 6 liter magnum of wine (LOL) so after getting Chris and Doug to autograph it, I happily took it home where it will make a nice addition to our bar.

We joined Messina Hof Winery & Resort‘s VIP club earlier in the year. One of the benefits with being a VIP member is you get a private wine tasting and tour for 20 people. We arranged our invitation list and the tasting was scheduled for 1:30pm on Saturday. We arrived at the winery and shortly thereafter everybody arrived on time.

We waited for the tour to start in the wine bar, and Mike, one of our favorite tasting people at Messina Hof, said it was time for our tour which he would give. Mike is a great guy and a lot of fun, so we knew everybody would have an excellent time. 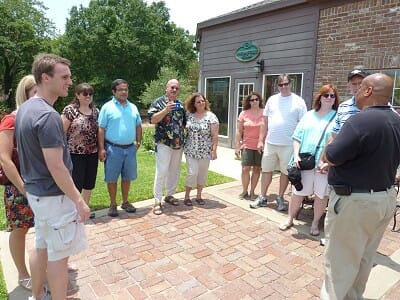 Mike took us outside and gave a little history of Messina Hof and the retail building which we were just in. We then went to the nearby Villa which is Messina Hof’s bed and breakfast building where ten rooms are available for a romantic stay. We have stayed there before and highly recommend it. 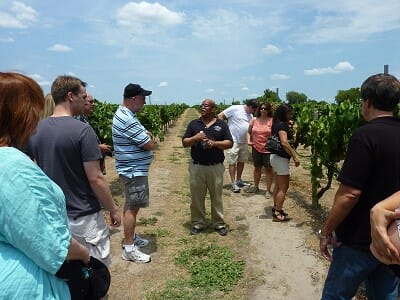 After the villa, we visited the vineyard of Black Spanish grapes where we got to taste some of the soon-to-be-harvested grapes. The production facility came next with the crush pad and back inside a cool building where the bottling is done. 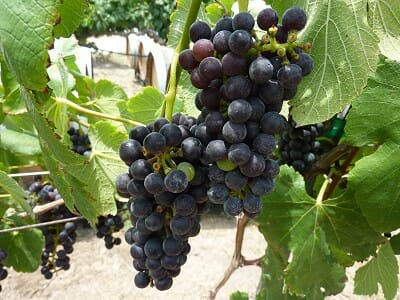 The next part was what everybody was waiting for, especially after being in the heat for a little while, and that was the wine tasting. We sat in a private room and Mike gave us an introduction to the four wines we would be tasting. Before tasting each white or red wine, he instructed us on how to properly taste including trilling for white wine and clucking for red wine. 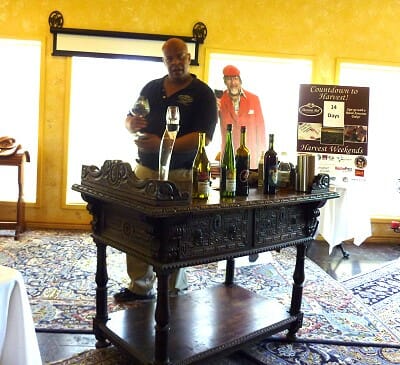 We were able to taste a Paulo wine and then finish with a Tawny Port. During the tasting a fruit and cheese tray was available for everybody to eat. At the end of the wine tasting, everybody was able to keep their Messina Hof wine glass.

We were thanked by everybody who joined us and they all said they had a great time. It looks like we had chosen the perfect wine drinkers to join us.

The Vintage House Restaurant, which is also part of Messina Hof Winery & Resort, beckoned some of us and eight of us enjoyed a late lunch. Overall, it was a great day and we look forward to doing it again next year.