Lone Star Wine Cellars is located in the square of McKinney. John Wales and Ron Ross opened the small wine tasting room and gift shop in 2003. Ron had built a small boutique winery on his property at the Triple “R” Ranch in 2000. John, who had planted the first commercial vineyard in Collin County in 1998, found himself in 2002 with no winery to process his grapes and he was still in the process of building his winery, Wales Manor. Together with the facilities at the Triple “R” Ranch and the grapes from Wales Manor, John and Ron opened Lone Star Wine Cellars.

The first time we visited Lone Star Wine Cellars, we emailed first to confirm their hours. Ron’s wife Deanna returned the email with the information and some suggestions on what else we could do while we were in McKinney. 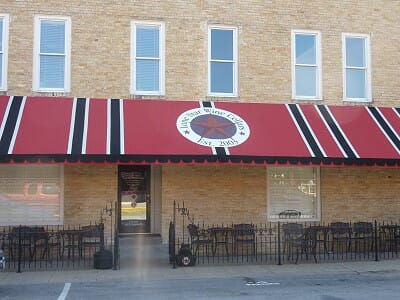 We arrived at the wine tasting room and sat at the tasting bar where Rubye was our pourer. She was a lovely elderly lady who was a bundle of fun. After we left, we could definitely see why she was hired with her bubbly personality.

The wines primarily served are from Triple “R” Ranch & Winery in addition to wines from Wales Manor and other local wineries. The grapes used by Triple “R” Ranch & Winery are from California and Washington but some wines use 100% Texas grapes. The menu with the available wines has detailed wine facts including the appellation, vineyards, alcohol percentage, sugar percentage, etc. There are no surprises on what you are drinking. 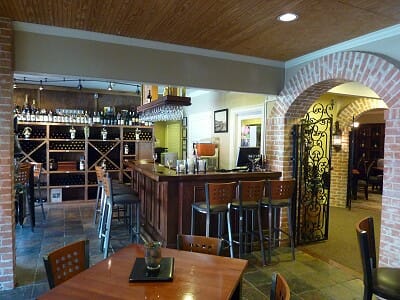 There are different tasting fees for the two types of tastings. One tasting is for three Estate wines plus one Reserve wine. The other tasting group is for four Reserve wines. The Triple “R” Ranch bottles are all corked and the tastings are poured from the bottle.

When our tasting was done we had time for a glass of wine. Rubye wanted to make sure we liked what we would be getting, so she gave a sample first, and the samples were very generous. We chose a glass of wine each and starting enjoying it. There is free food available while you do tastings or have a glass of wine. In addition other food can be purchased.

While drinking our glass of wine, a lady came in and it was Deanna Ross. Rubye told her we had emailed her and she told Rubye to give us another glass of wine on the house. Hey, who are we to turn down a great glass of wine?

While we were on our second glass of wine, the musician who was going to perform arrived and started setting up. We learned that music events are held on Fridays and Saturdays. Weddings are also held at Lone Star Wine Cellars. 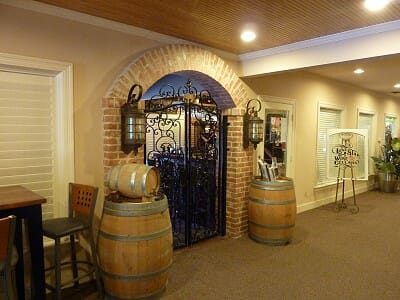