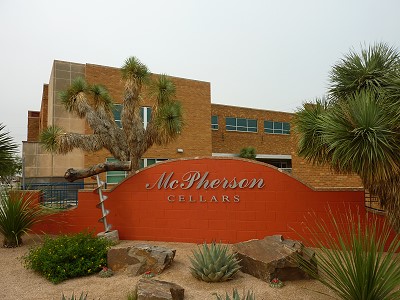 We arrived at the winery which is located in a historic 1930’s Coca-Cola bottling plant in the historic Depot District of Lubbock. After taking photos of the giant corkscrew near the front sign (imagine the size of wine bottle needed for that corkscrew!), we entered the building. Upon entering the front door an old Coca-Cola vending machine reminds you of the building’s past you are embarking upon. 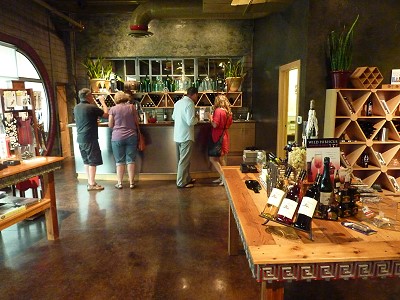 After going through the nice gift shop which has clothing, wine accessories, and other items, we went to the tasting bar and met Darik Bradley, tasting room manager, Paige Rusk, and Sergio De Jesus. Greetings were exchanged and since complimentary tours are available daily, Darik led us on a tour of the winery. 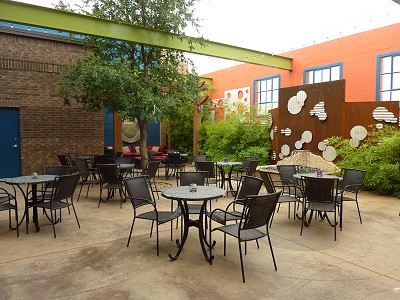 We saw the lush brightly decorated courtyard with fountains where you can enjoy a glass of wine. Kim McPherson’s wife Sylvia is an interior designer and helped decorate the winery using her preferred bright color combinations from the courtyard to the tasting room. Along the courtyard and out to the street were imaginative works of art made out of metal. A wedding reception was being set up in the large events room. 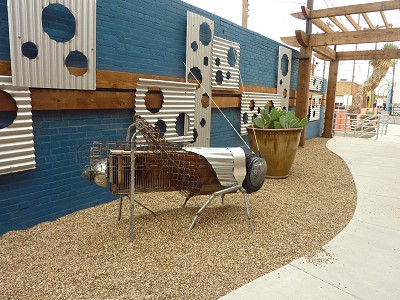 Inside the winery, we could see where the renovation from the Coca-Cola factory to winery took place because they left a wall partially untouched. By doing so, it gives the facility a nice touch. Outside the building was the crush pad where they start the process of crushing and pressing the grapes into wine. The wine is stored in barrels and aged however at another location in the city. 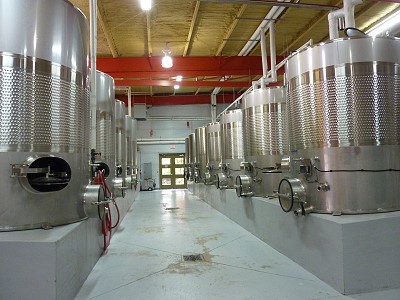 After the informative tour, we ended up at the tasting room for our tasting. We were given two wine tasting lists to choose from: reserved and non-reserved. There is a fee for tasting which includes your choice of five non-reserved wines and the reserve wines can be sampled for a higher tasting fee. For the tasting, you stand at the tasting bar and the tastings are poured from the bottle. McPherson Cellars uses both corks and screw caps. Crackers are provided to cleanse your palate.

Before our trip, we visited our local liquor store to see which McPherson Cellars wines we could buy and one bottle we found was called Hook, Line, & Sinker. We learned this was McPherson Cellar’s second label but right now they only make a blush with that label.

McPherson Cellars is available for events such as meetings, parties, dinners, and weddings. They can accommodate up to 200 seated guests. A wine club is available which offers discounts and wine shipments in addition to other benefits. 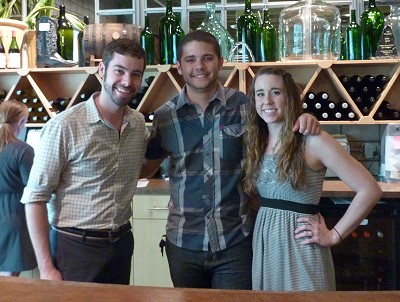 If you visit Lubbock, make sure you visit McPherson Cellars which we awarded the Best Urban Winery in the 2012 TX Wine Lover awards.