We have had some great visits at wineries and doing wine tastings, but unfortunately there comes those times where things just don’t work out as planned. Here are a couple wineries we tried to visit. We’re not saying anything negative about these wineries, but just a warning to those trying to visit any winery that unexpected things can happen. Always try to confirm winery hours and availability.

We would love to tell you a lot about Collin Oaks Winery, however, our visit was really short. Collin Oaks is located in Princeton and our GPS was able to lead us to the location. 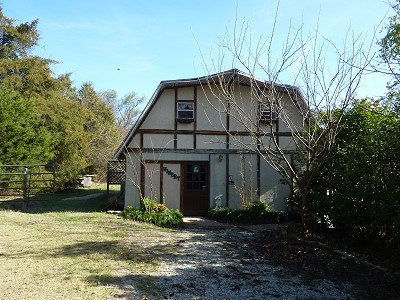 The winery is shaped like a Gambrel style barn. Upon entering the winery, there is a very small area with a tasting bar. Nobody was there but since the door was open, we can only assume somebody must have been in another part of the winery.

We waited around for a little while and looked at the wines that were visible and they were mostly fruit wines. Since nobody showed up and we could not hear any noises, we decided to leave. They did have their Texas Winery Passport display with passport code displayed on a table so it was not a fruitless (no pun intended) trip.

Perhaps next time we’re in the area, we’ll try visiting again or see them at a wine festival.

Collin Oaks Winery is on the Munson Wine Trail.

Update: I was able to visit Wales Manor and had a great visit. Please read the update.

We tried unsuccessfully to visit Wales Manor twice. The first time was the first weekend in December and we were visiting the wineries on the Munson Wine Trail. The winery is located outside of McKinney.

The GPS found the winery without a problem, however when we pulled up to the driveway, there was a gate across it. Huh? We had verified the visiting hours so we were totally surprised by the winery not being open. We called the winery phone number but had to leave a message. The vineyards looked nice and there was a house down the hill which we assumed was where the winery was.

We were a little perturbed, okay more than a little, but we headed to the next winery on the trail. At the next winery we mentioned we were doing the wine trail and Wales Manor was closed. They commented how the winery closes during the winter but were surprised they had closed for the winter already. At least we weren’t the only ones.

We were going to be in the McKinney area again months later so we decided to try again. I left a phone message with the winery to ensure they had already opened for the summer and did get a return phone call. The website stated they open at noon on Saturdays but the lady who returned my phone call said they would be open at 11:30am. Great, that would be even better.

While waiting for 11:30am to roll around, we spent some time at Lone Star Wine Cellars in McKinney. Wales Manor was on their wine menu but since we would be visiting them next, we decided to try something else.

The GPS again brought us to the winery and this time there was no gate across the driveway. Yay! Making our way down the driveway, a sign pointed to the winery to the right. Oh, so the house wasn’t the winery. It must have been the owner’s house. After parking, we walked down the somewhat steep path to the winery. The bell tower which is on their website was visible and looked nice. 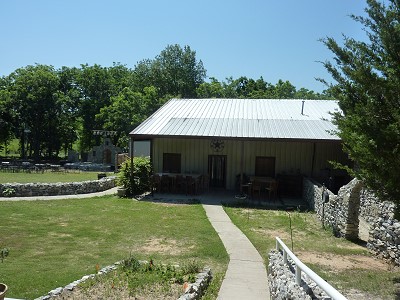 There wasn’t a door on the winery but plastic strips, similar to the kind you might find in a walk-in refrigerator. It was a nice little tasting room, but again, nobody was there. We said “Hello!” but didn’t hear a response. Oh well. They also displayed the Texas Winery Passport display with their passport code, so we wrote that down. Since we didn’t feel comfortable walking into any back rooms, we decided to make our way to the next plan of the day. 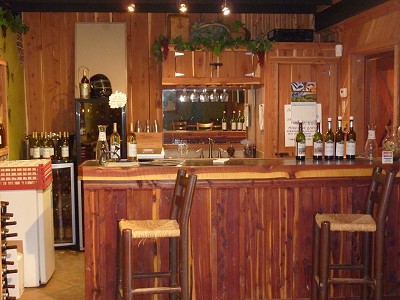 According to their website, they have musical events in addition to weddings.

Next time we’re in McKinney, we’ll stop by Lone Star Wine Cellars and try their wine. Wales Manor is on the Munson Wine Trail.