4.0 Cellars is located in Fredericksburg and is a collaboration between three Texas wineries: Brennan Vineyards (Comanche, TX), Lost Oak Winery (Burleson, TX), and McPherson Cellars (Lubbock, TX). The owners of each winery are together the owners of 4.0 Cellars.

When we took our last big Fredericksburg road trip at the beginning of December, Todd Webster, winemaker at Brennan Vineyards, wanted me to take a photo of the current construction of 4.0 Cellars. The building was framed including the structure of the outside tower. There was obviously still some work to be done. I made a couple one day road trips to Fredericksburg after that and each time could see the continuing construction of 4.0 Cellars. The place was looking good and I could not wait for them to open so we could visit.

Through email I contacted Kelly Davis Aldridge, general manager of 4.0 Cellars, and she told me the winery was to open on Wednesday, April 11th, so we made plans to visit the following Saturday. Unfortunately there were some delays with the opening and it got moved to Monday, April 16th. Since we were originally scheduled to be in Fredericksburg for the weekend, Kelly graciously planned for us to still visit on Saturday. 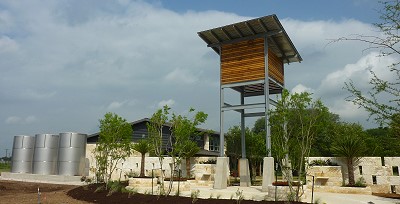 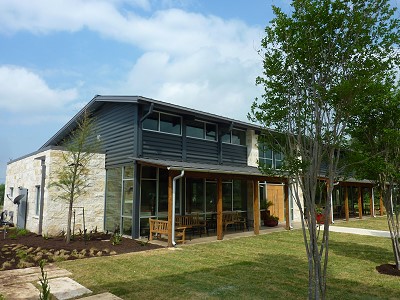 We arrived at 4.0 Cellars and there were cars in the parking lot and workers were still finishing the landscaping. With the amount of cars present, we were unsure if other people were also invited like we were. We met Kelly inside the tasting room and there was a staff of about 18 people present. She explained they were there finishing training so they would be ready for the opening on Monday. As it turned out we were the very first customers at 4.0 Cellars. 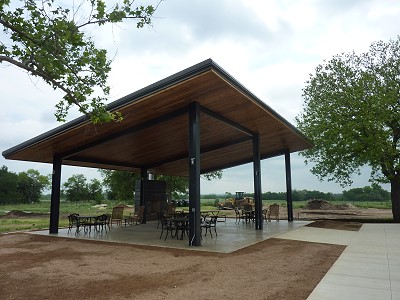 Kelly took us outside and gave us a tour of the property. There is a large covered event space area available for weddings, receptions, birthday parties, and other events. Kelly’s background is hotel management and event planning so when she first saw the property, she immediately started thinking of the weddings and other events which could take place. The covered area also has a fireplace for the winter. Cooling stations will be used to help during the hot summer days. A full service wine bar is outside which can do tastings for overflow, but primarily will be used for people who want to buy wine by the glass or bottle and enjoy sitting in the outside area. Next to the outside wine bar is where they will store their sherry. 4.0 Cellars will be making a sherry and it will probably be the first 4.0 Cellars label available. Most likely McPherson Cellars will produce the sherry and it will be hand bottled on site. 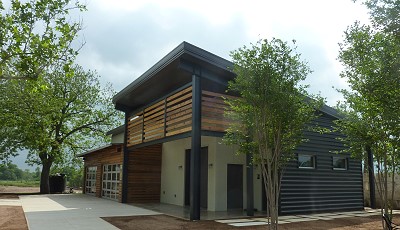 Eventually a vineyard will be planted but it will be mostly for show. After the outside tour we went back into the tasting room and Kelly showed us a private tasting room which can be reserved for tastings or wine pairings. With advance reservations 4.0 Cellars can get local food available for pairings. The private tasting room has a television which will be broadcasting a 12 minute video of the three winery owners talking about their own wineries. The video should also be available on the website which will be updated in a couple days. 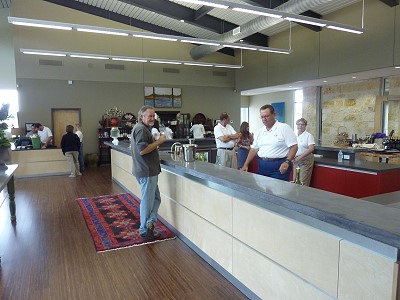 It was time to go to the tasting bar and taste some wine. I was waiting for this part because even though we have visited many wineries, we have yet to visit any of the three wineries which make up 4.0 Cellars. We will visit two of the three early next month though when we do the Way Out Wineries wine trail.

At the tasting bar was a gentleman already drinking some wine and we were introduced to Kim McPherson, owner and winemaker of McPherson Cellars. That was a nice surprise. One fun thing we were told is 4.0 Cellars will have the various owners of the three wineries occasionally come into 4.0 Cellars so customers can meet them. 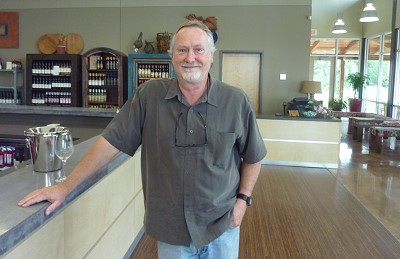 We were next introduced to our tasting guide Kassie McPherson, Kim McPherson’s daughter. Kassie will remain at 4.0 Cellars as a tasting room server and was very knowledgeable about all three wineries.

Looking at the tasting menu we learned not every wine from each winery will be available at 4.0 Cellars but there will still be a large selection. Initially on the tasting menu each winery has five wines. A tasting fee will get the visitor a sampling of 6 wines which includes a 4.0 Cellars wine glass. Every week they will have a complimentary wine that is not on the menu for a total of 7 samples. There are also 10% case discounts.

We started our wine tasting and the wines were poured with measured pourers. McPherson Cellars and Brennan Vineyards use some screw caps in addition to corks but Lost Oak Winery only uses corks. Initially on the tasting menu are 5 white wines, 8 red wines, a blush, and a sweet white.

Since we still are primarily white wine drinkers first, we started with the 2011 McPherson Cellars Roussanne. This is McPherson Cellars signature white wine. We then ran into a little situation. For some unknown reason, Gloria seems to be very sensitive to the taste of any wine which has Viognier in it. The rest of the white wines all had Viognier so she moved on to the red wines while I went next to the 2010 Lost Oak Winery Viognier. I have wanted to try this wine since it had recently won a Double Gold medal in the San Francisco Chronicle International Wine Competition. After trying it, I could see why, as it was excellent and a little unlike other Viogniers I have had.

We enjoyed moving through the tasting menu, asking questions, getting answers, and overall having fun with the staff. Serving at the winery for the staff is more of a challenge since they need to learn about each of the three wineries and hopefully be able to answer any question about them. At other places the staff only has to concern themselves with information about one winery.

If you are hungry, cheese boards can be bought which will include local and international cheeses, crackers, fruit, and chocolate. A sampling of a cheese board was provided which we enjoyed, especially after we jokingly learned they had just finished making the cheese the night before. We told you they were a fun group!

On the tasting menu is McPherson Cellars Sangiovese which Kassie informed us was often noted as their signature red wine. The Sangiovese grapes still come from Kim McPherson’s father’s original Sagmor Vineyard which got its name because the original trellis wires sagged noticeably.

Lost Oak Winery will still have bottles there with the Lone Oak label until they are gone since the change in the winery name was recently done. That change also adds an extra challenge to the staff to remember to use the correct Lost Oak name, especially those who have been familiar with the Lone Oak name for some time.

Brennan Vineyard’s wine was represented very well with their version of Viognier, Three White Chicks, and the 2009 Buffalo Rhome. We are constantly learning about Texas wine and wine in general as we learned the Buffalo Rhome is a Rhone style wine which also includes the Cinsault grape, a blending grape we had not yet heard of.

We had a great time tasting the various wines 4.0 Cellars offers. We decided to get some bottles of wine and learned the prices at 4.0 Cellars are the same as if someone had gone to the individual wineries themselves.

4.0 Cellars has a small gift shop including clothing and wine accessories. Two wine clubs are offered, a Dean’s List and an Honor Society. Note the 4.0 theme?

I am sure the information will be on 4.0 Cellars’ website but their hours will be Monday through Saturday from 10am-6pm and Sunday from 12pm-5pm.

Overall, it was a great experience at 4.0 Cellars and definitely well worth the wait for them to open. There is no doubt we will definitely be stopping in the next time we are in the Fredericksburg area. If you happen to be doing the Wine Road 290 trail, make sure you include 4.0 Cellars in your wineries to visit.