La Cruz de Comal is located in the town of Startzville, not far from Canyon Lake. It is owned by Lewis Dickson and California winemaker Tony Coturri. La Cruz de Comal has been making wine since 2001 and became a bonded winery in 2004 where they sold their wines in wine shops and restaurants. They recently opened a tasting room in February 2012.

The unique thing about La Cruz de Comal wines are they are made in a natural style. That is, there are no additions of acid, sugar, grape concentrate, powdered tannins, and artificial coloring agents. The grapes are grown without the use of chemicals and vinified using native yeasts. Native yeasts are yeasts that live naturally on the skins of the grapes in the vineyards and in the winery. 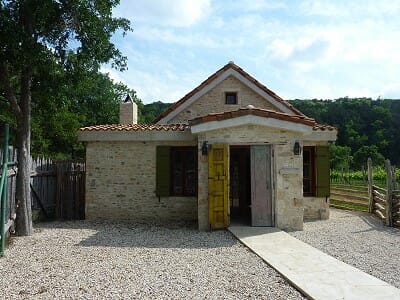 After reading about the natural wines which can contain sediment, I wasn’t really sure what to expect, but I had to visit. Two of my friends took a Dry Comal Creek “Winery U” class with me and afterward, we made the short trip to La Cruz de Comal. A small sign along the road led us to a very steep driveway but we made it down safely and faced a beautiful natural looking building with a vineyard beside it. We immediately fell in love with the building and couldn’t wait to go inside.

When we entered the building, owner Lewis Dickson was seated behind the tasting bar with, as we learned, two of his friends seated in front. They moved to sit near a nice fireplace area and we took the three seats in front of the tasting bar. 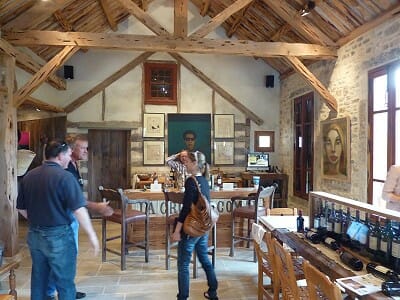 Lewis explained there was a $15 tasting fee for his five wines. There was also a list of library wines from previous years which are available to buy, and some of the bottles were in a glass enclosed case on a nearby table displaying the evolution of La Cruz de Comal. The tasting wines were presented in a metal case which had an ice pack in the back to keep the temperature of the wines at “cellar temperature”, around 56-58 degrees Fahrenheit.

The bottles were uncorked and Lewis began our tastings pouring from the bottle. The first wine we tried was a Blanc du Bois and there was sediment at the bottom of the bottle. Lewis does not hide that fact and started telling us about his natural wines. Since they do not filter their wines, the wines eventually become clear but you can still see some sediment at the bottom of the bottle. If the bottle is shook up or transported, the bottle will not be as clear and should be stood upright for a day or so to allow the sediment to drop to the bottom. Since the wines are natural wines, care should be taken in their handling and storage. They bottle their wines at “cellar temperature” and recommend storing them at the same temperature so the wine will still hold up and age correctly. If someone purchases six bottles of La Cruz de Comal’s wine, they will be given a piece of paper with instructions on how to properly transport, store, and enjoy their wines.

I have usually avoided traditional wines before which may contain some sediment or crystals, but the Blanc du Bois was very good. My friends agreed and at the end of the tasting, they ended up buying a bottle of the $39 wine. 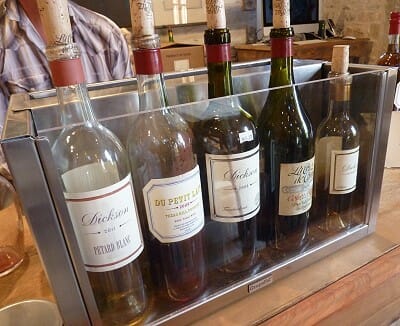 Lewis continued telling us about his natural wines and considers his wines alive. He said, “You can have a wine that Robert Parker gives a 95 to. It’s black, it’s icky, it’s jammy, it’s oaky, and it’s dead. It’s dead on arrival. It’s not alive. It doesn’t evolve in the glass. You open a bottle and the second glass tastes the same as the first and the fourth glass tastes the same as the second. I think if a wine doesn’t evolve in the glass, it probably hasn’t evolved much in the bottle. I’m trying to take the raw materials here and not make wines in the image of something they’re not.”

On the La Cruz de Comal website, there is a picture of his limestone hillside cave where he stores the bottled wines. The cave and small winery are located on the other side of the vineyard from the tasting room so it was not visible. Speaking of vineyards, he grows Blanc du Bois and Black Spanish (Lenoir) on three acres. When he started he had nine varieties but soon learned the grapes which could grow the best. All the grapes used in La Cruz de Comal’s wines are 100% Texas grapes which make their Texas wine.

The wine is made using both stainless steel tanks and barrels. When using barrels, he uses French barrels and hybrid barrels. I haven’t heard of hybrid barrels before and Lewis described what they were. He said typically they are American oak staves with French oak heads, but now they have come out with barrels with alternating French oak and American oak staves. Even though some of his wines are stored in stainless steel, he said sometimes his wines need time in the bottle to round out.

Two different labels are used, “La Cruz de Comal” and “Dickson”, which one of my friends asked about as they were confused. Lewis explained that wines bottled under the “Dickson” label means most likely the grapes came from his vineyard. He also explained a good marketing reason for the two labels.

I asked if many people have heard about the tasting room now being available and he pointed to us as evidence that people have. While we were there, one couple stopped in who said they were driving by and just happened to see the sign. La Cruz de Comal should probably update their website so customers know they now have a tasting room and what the hours are. However, Lewis does not really want a large amount of people visiting at one time which would require multiple tasting bars and is very happy with what he has right now.

We enjoyed our visit to La Cruz de Comal and my friends said they would love to come back in the winter, sit by the fireplace, and enjoy the Texas wine.