The last day of the 2012 TEXSOM Conference started with apparently some people having had imbibed in too much wine in the past couple days. The first panel was perfect then which was about the State of the Industry. James Tidwell MS was the moderator and the panel members were Drew Hendricks MS, Paul Wagner, Rick Bakas, John Ragan MS, Laura DePasquale MS, and Rajat Parr. 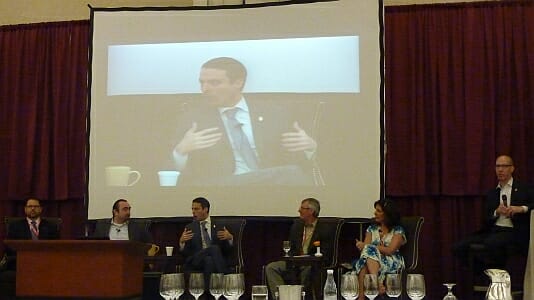 State of the Industry

James Tidwell’s first question to the panel was since most people in attendance don’t work on the floor in a restaurant, “What does Sommelier mean?” Drew Hendricks was the first to reply and believes people are taking the word Sommelier and using it as an expert in a field. Paul Wagner said it is not really just knowing things but being a guide and being able to deliver the message to the consumer. The belief agreed by all is that hospitality should be first and then to educate consumers. Sommeliers need to learn from the customer on how much education they want.

The next question asked was, “What do you see 5 years down the road in the industry?” Laura said it was very important to build important relationships which are meaningful. Paul said the brands which are successful will be the ones who learn to talk to the consumers and not required to know the geology and chemistry of the wines. He pointed out people don’t want facts, they want stories. Drew gave the humorous answer when he said, “Expresso machines in place of glove boxes in cars.” Rick said people need to think mobile first and desktop second. He gave a suggestion for companies to use QR codes which allows the customer something they can take with them to learn more later. The panel provided their individual insights into the state of the industry during the rest of the session. It was very informative and could have gone longer.

The next session, including the start of tasting wines, was about New Zealand: Trends for the Future and presented by Cameron Douglas MS and Andrew McNamara MS. A history of New Zealand wine and the current state was given. The first wines were started in 1819 and Sauvignon Blanc made its debut in the 1970’s. There are around 34,000 hectares under vine. For those like me who did not know exactly what a hectare is, it is approximately 2.47 acres. 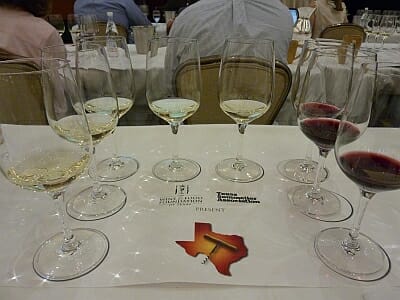 In 2011, 328,000 tonnes of grapes were crushed with Sauvignon Blanc leading the way with 224,000. Again for the U.S. measurement system users, one tonne is a little less than one ton. In 2012, there were 269,000 tonnes crushed which was 18% down overall. This was caused by lack of sunlight, too much rain, and botrytis invasion. There are 703 wineries/brands in New Zealand as of August 2012. Over 90% of wine in New Zealand uses screw caps. An awesome presentation of the land of New Zealand with their mountains, lakes, and winery locations was given using Google Earth.

The eight wines tasted started from a Sauvignon Blanc and went through whites Riesling, Pinot Gris, Chardonnay, and into the reds of Pinot Noir, Syrah, and Malbec. It was a great representation of wines from New Zealand.

The buffet lunch included the wines of Rioja and there were five wines to taste.

The first afternoon session was Niagara & Beyond presented by John Szabo MS and Geoff Kruth MS. Some people thought the session was going to be about New York state wines, but the session was about Canadian wines. The first winery in Canada was in 1866 with the first commercial winery starting in 1975. Today there are 140 wineries. VQA is the Vintner’s Quality Alliance and is a regulated appellation system. The Ontario VQA is 100% Ontario grown grapes and the VQA identifies four appellations in Ontario.

The primary white varieties are Chardonnay and Riesling. Other important varieties are Merlot, Cabernet Sauvignon, Baco Noir, and Gamay Noir. One wine they are known for is Icewine and we were told that is the correct capitalization and it is just one word. The eight wines tasted included four Chardonnays and four Pinot Noirs.

During the tasting break, Coquerel Wines presented their Sauvignon Blanc and Merlot for us to taste.

The session after the break was about Cabernet Franc and was presented by Laura DePasquale MS, John Blazon MS, Jay Fletcher MS, and Peter Neptune MS. Before the session, Peter and Laura started an impromptu singing with “We want the Franc. Gotta have the Franc.” That was an immediate sign that this panel was going to be fun. 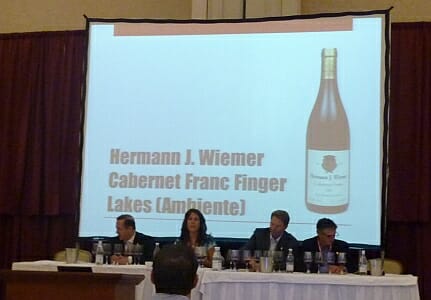 This time there would be no history or geology lessons given but went immediately into the tasting of the Cabernet Francs. The Cab Francs were from around the world and it started with a Finger Lakes wine, moving south to Virginia, and overseas to France. We came back to the United States with two 100% Cabernet Francs from California and then up north to Washington state. We then went to South America with a Chilean wine using new French oak. The trip around the world finished in Italy with a 2000 Guiseppe Quinterelli Veneto Alzero. Someone discovered this bottle of wine would cost around $400. It was an amazing journey with a grape variety which does well around the world.

The seminars for the day were now over and the last thing remaining was the Grand Tasting and Awards Reception. Wow! Over 150 wines were present to be tasted and there were 90 minutes to do your tasting. Obviously there was not enough time to taste everything and the 90 minutes was still too short to enjoy the wines, however the time was extended a bit. There were a lot of delicious hors d’oeuvres to eat during the tasting. In the middle of the tasting the awards ceremony was held. We learned that Texas is the only state which holds a sommelier competition for Best Texas Sommelier. This year’s winner was Ryan Tedder of FT33 restaurant in Fort Worth. Time was given to finish tasting and everyone I saw was enjoying themselves immensely. 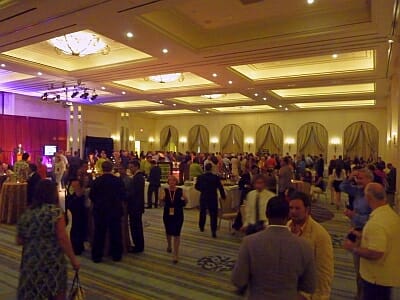 Overall, the entire TEXSOM experience was fantastic. Besides being educational and informative, it was also a lot of fun to meet people who you rarely see or meet people for the first time that you may follow on Twitter or Facebook. I know that I will be attending the 2013 TEXSOM conference! See you there!!