The first day of the 2012 TEXSOM (Texas Sommelier Conference) had a choice of tracks you could choose. The first was the Tasting Track which of course involved tasting wines. That was obviously a popular choice as it sold out. I had chosen the second track which was the Social Media Track. My decision was not because I didn’t want to drink some wines, but I feel anything I can learn about social media, which this blog is part of that, can be beneficial even if it is just one little tidbit. And as expected, I did learn not just one but a few tidbits. 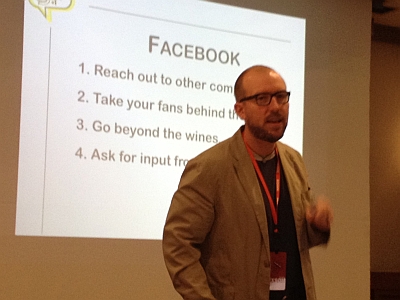 After you determine your social media platform, you need to push your content to your audience but you must also listen. Tony gave a personal example of this with Delta Airlines listening to their customers on Twitter with replying to them and solving the problem he was having. Other businesses just ignore their customers on social media.

Once again Tony gave an excellent session on social media and even after going over three hours long, he could have kept helping people with their social media questions.

The afternoon session was called Engaging People with Social Media and was given by social media expert Rick Bakas. I have been following Rick on Twitter and besides being very active on there, he is also active on many other social media platforms. I was interested to hear what Rick had to say about social media. 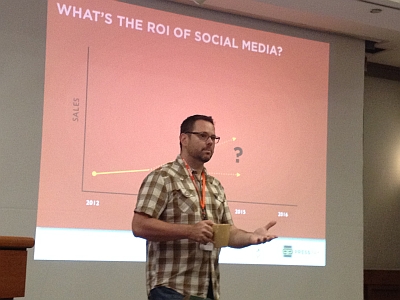 Rick started out by warning everybody that he swears a lot so don’t be surprised. He did do his share of cursing, but with his energetic and fun personality it just seemed to fit right in and I don’t think anybody was offended. Rick started out by presenting where technology started (remember your first personal computer?) and where we are going with technology like computers built into your refrigerator holding your cooking recipes. The key point Rick made was that technology is happening so fast today and we’re only at the beginning of a huge trend.

He presented a quote from Eric Schmidt, Former Google CEO, which was, “More content is created online every 48 hours than the dawn of man to 2003.” That’s pretty incredible if you think about it. Paper and print media is going away and things are moving into a digital world with the social web.

He believes, and from the response of the people in the session, everything is going mobile. When asked who did NOT have a smartphone in the class, not a hand was raised. When mobile devices were first introduced people didn’t quite trust it but now we are using them more often, putting more trust into them such as using credit cards with them, and each device is an extension of us and personalized to each one of us.

Rick’s primary audience for most of the session was businesses and how they should humanize their brand and interact with people on the various social media platforms. A lot of businesses are using social media platforms such as Facebook and going directly to the sale instead of interacting with their customers, humanizing themselves, which in turn gets customers interested in their brand, and as a result gets them wanting to buy their brand.

Rick talked a little about the best use of Facebook and Twitter and offered some tips for people to improve their social media using them. He also told about working with wines.com and what they are planning on doing in the near future to offer customers that human experience.

Overall, Rick gave an energetic and interesting session on technology and using social media to improve the relationship businesses have with their customers.

Thanks for the run down. I’m very curious now. If I had gone, I would have attended this too. Now I’m gearing up for next year.

Thanks for the recap of the conference, and of the social media sessions. Hope you found them useful.