The TEXSOM (Texas Sommelier Conference) is being held from August 11-12 in Las Colinas, Texas. This year’s conference was set up differently by holding parallel sessions instead of one session for everybody. The primary reason is the number of attendees has grown every year and separating into different rooms helped that. In addition it also allowed people to select the topic they were most interested in. 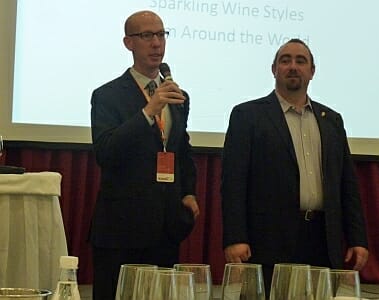 The first session I attended Sunday morning was “Traditional Method: Sparkling Wines from Around the World” which was presented by Charles Curtis, MW. Curtis started by explaining the traditional method. Other methods used in sparkling wines are the methode ancestrale, transfer method, and charmat method.

The first wine discussed was Cava from Spain. Different grapes are used in the blend and Xarel-lo, Macabeo, and Parellada are the bulk of the blend. Other than the grapes used, it still uses the traditional method which is the same as Champagne. 95% of Cava is made in Penedes, Catalonia. The example wine was Raventos 2009 Cava Hereu Brut Resera, Spain. La Planta. It came from the Viader single vineyard source and was 15 months on the lees which in effect produces finer bubbles.

Prosecco was the next wine. It can be made spumante or frizzante and also can be Brut, Extra-Dry, or Dry per EU (European Union) regulations. It is produced from the Prosecco grape also known as Glera. The wine tried was Fantinel Prosecco Extra Dry, Italy.

The next sparkling discussed was Franciacorte which is produced in Brescia (Lombardy). It was the first Metodo Classico in Italy. Vineyards overall are planted to 85% Chardonnay, 10% Pinot Nero, and 5% Pinto Bianco. It may be released 25 months after harvest, 18 months minimum on the lees, and 30-37 months on the lees for vintage. The wine tasted was Bellavista Franciacorta Cuvee Brut, Italy, with zero dosage.

Sekt is a sparkling wine which is most often German or Austrian, but it is not restricted. Good Sekt uses the traditional method but 95% Sekt is charmat. Almost 90% of Sekt uses imported fruit unless labeled Deutscher Sekt. The best German Sekt usually uses Riesling, Pinot Blanc, Pinot Gris, and Pinot Noir. Austrian Sekt often used Welschriesling and Gruner Veltliner. The example wine was Brundlmayer 2008 Sekt Brut from Austria. 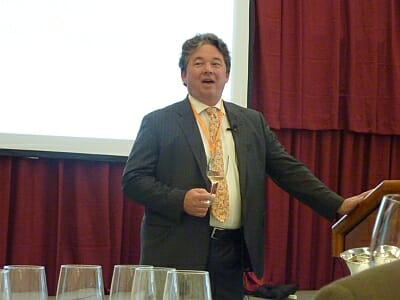 Next was sparkling wines from the New World and they are done in most New World winemaking countries and as far as Brazil. It is mostly unregulated and can be produced by any method. The wine was a Jansz Premium Cuvee from Tasmania, Australia. Tasmania is a very cool climate growing region. It is kept “as long as possible” on the lees and the average is 2 years.

Vouvray is a region in the Loire Valley of France and the sparkling Vouvray depending on the year has production of sparkling wine about 50% larger than still wine. The wines need to age only 9 months on the lees. The wine tasted was a 2002 Huet Vouvray Petillant Brut Reserve, Loire Valley, France. Primary fermented in cask and tank on wild yeasts. It is bottled before the end of alcoholic fermentation and yeast is added at this stage.

Next up was Crémant which originally meant lower pressure wines in the Champagne region. Champagne wanted to regulate the use of Methode Champenoise and in 1990 the term cremant was used in its place. Seven French ACs (appellation contrôlée) use the term. Crémant d’Alsace can only be made from Riesling, Pinot Blanc, Pinot Noir, Pinot Gris, Auxerrois Blanc, and Chardonnay. The wine we tasted was the Lucien Albrecht Crémant d’Alsace, France with a half Pinot Blanc and a quarter each of Pinot Gris and Riesling. Only the cuvee is used.

We finished with a sparkling Malbec, the Alma Negra Malbec Rose, Mendoza, Argentina. It was made from 85% Malbec and 15% Pinot Noir.

Curtis knew his sparkling wines and often commented how he and his wife drank them with foods and sometimes even just French fries. It was nice to hear from somebody who knew and enjoyed the topic they were presenting.

Etna is a Denominazione di origine controllata (DOC) for wine from the Etna region in Italy and is located on the slopes of the Etna volcano. Craig Collins told us about his trip to Sicily and his personal experience with the Etna volcano actually erupting. Etna itself is actually a national park. 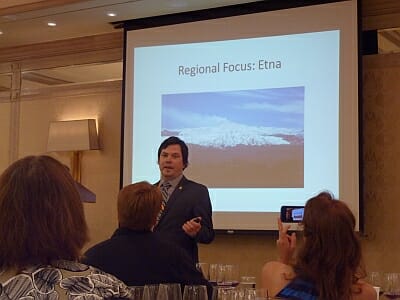 Frank Cornelissen is a 51 year old Belgian making wine with no viticultural or vinicultural intervention since 2001 and has a 51 hectare estate. The next wine tasted was a Frank Cornelissen Rosata Susucaru 5 which smelled and tasted like yeast similar to a beer. Even the color of the wine was a different color from other red wines. The next Frank Cornelissen wine was a Rosso MunJebel 8 made from Nerello Mascalese which was full of tannins.

Tenuta di Fessina is a 15 hectare estate in Rovittello. The first wine tasted was a Fessina Nerello Cappuccio Laeneo 2011. The second Fessina wine was a Rosso Musmeci 2008 was very good and retails for around $70.

Tenuta della Terre Nerre is owned by Marc de Grazia, one of the pioneers in Etna. The style is very close to Burgundy. The wine tasted was a Terre Nere Rosso Santo Spirito 2010 which was the only DOC wine we tasted.

The seminar gave an interest to another wine region and Collins and Broglie made it enjoyable.

After a tasting break (yes, more wine) at different stations around the facility, I attended the seminar titled “Varietal Focus: Benchmark Styles of Regional Classic Red Wines.” The moderator was Jordan Mackay and the panel included Michael Franz, Thomas Burke MS, Alfonso Cevola CSW, and Sherry Sauter Morano MW. Morano first presented the Umathum Zweigelt, Burgenland, Austria 2011. Zweigelt was bred by Dr. Fritz Zweigelt in 1922 at Klosterneuberg research center in Austria. It is grown throughout Austria and is the most planted red grape in Austria.

Burke then presented an Agiorgitiko wine. The majority of the plantings are in Nemea, Greece. We tasted the Skouras St. George Grand Cuveé Nemea, Greece 2008. 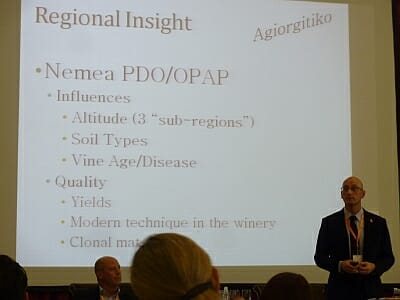 Franz presented Pinotage which is South Africa’s signature variety. It is a red grape cross made in 1925 between Pinot Noir and Cinsaut and is often criticized for sometimes smelling of acetone. The wine we tasted was the Diemersfontein Pinotage Western Cape, South Africa 2011.

Morano discussed the Bonarda grape grown often in Argentina. The wine tasted was Zuccardi Bonarda Serie A, Mendoza, Argentina which is a very food friendly wine.

The next grape presented by Burke was Carignan. It is a variety that has plenty of everything. The wine tasted was Tessallae Carignan from Côtes Catalanes, France 2011.

It again had been another interesting seminar at TEXSOM where you can taste wines you normally don’t get a chance to taste.

You can see photos from the Texas hospitality suite on my Facebook page: http://www.facebook.com/TXWineLover 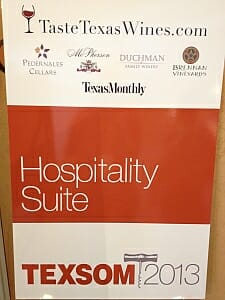