Day 2 of the 2012 TEXSOM (Texas Sommelier Conference) conference was the first day where there were just one set of sessions for everybody to attend and every session was about wine and tasting wine, except for the final session which was about beer. 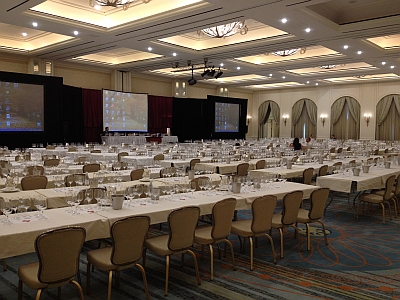 An empty ballroom soon to be full of wine lovers

The first session was on Bordeaux and was presented by Wayne Belding MS (Master Sommelier) and Brett Zimmerman MS. They explained about the history of the Bordeaux region in France starting from the 1100’s on up to today with the politics, introduction of wine, and around 1700 was the development of the bottle and cork. The soil of the region was discussed where the vines seek water from the clay but the gravel allows it to drain.

We then got to taste the eight wines from the Bordeaux region. Every wine was a 2008 except the last one which was a 2001. The room got quiet except for the accidental clinking of glasses during the tastings and the presenters talking about the wines.

We then had a tasting break which included Pedernales Cellars offering tastings of their 2010 Viognier and 2010 “GSM”. This tasting led perfectly into the next session which was called Texas Terroir presented by Guy Stout MS and Christy Canterbury MW (Master of Wine). Even though Christy now lives in New York City, she is originally from north Texas and was the first Master of Wine from Texas. Guy Stout also has his own vineyard in the Hill Country. They gave a great and entertaining presentation which kept people from being bored.

During the presentation they said there were over 220 Texas wineries in 2009 and Guy pointed out that also included winery permits. When asked how many actual wineries there were in Texas, he guessed around 175. Guy had a humorous style and one example was when he said, “I can’t even pronounce terroir. Around here we call it dirt.”

We then got the chance to taste eight wines from Texas including wines from Duchman Family Winery, McPherson Cellars, Cap*Rock Winery, Sandstone Cellars, Pedernales Cellars, Fairhaven Vineyards, The Vineyard at Florence, and Haak Vineyards and Winery. Everyone in the audience seemed to enjoy the tastings.

After the morning seminars was a buffet lunch including four wines from the Russian River Valley by Arista and Williams-Selyem.

After a full lunch, it was time for the afternoon sessions starting with an excellent presentation of Rieslings by Tim Gaiser MS, Laura Williamsom MS, and Keith Goldston MS. All three of the presenters love the Riesling grape and the different wines which can be can be made from it from dry to sweet. Tim Gaiser said, “I love Rieslings. Half my cellar is Riesling and if you quizzed 100 Master Sommeliers, most would say the same thing.”

No time was wasted in this presentation as we started tasting right away. The Rieslings were perfect wines to have after lunch and from the amount of people tweeting in the seminar, they also agreed. One interesting fact was even though they are white wines, a lot of Rieslings have the potential to age even up to 30 or more years. The Rieslings we tasted were worldwide wines ranging from Australia, to CA, to NY, to Germany and Austria.

There was another tasting break where Alexander Valley Vineyards offered their “Cyrus” which is a Cabernet Franc based wine. Next up was a seminar titled Oregon but it was really Oregon Pinot Noir wines. The seminar was presented by Fred Dame MS and Nate Ready MS.

A little knowledge of Oregon’s growing season and in particular the 2010 year was given. This is because out of the eight Pinot Noir wines tasted, seven of them were 2010 and the last was 2009. 2010 was a great growing season for Pinot Noir in Oregon and it was the coolest year in 50 years. The cool summer weather caused growers to drop fruit to low levels and all fruit was picked during the third week of October. 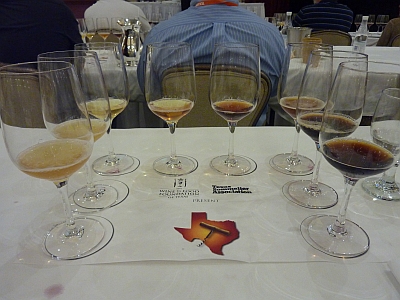 The final seminar of the day was called Beer and was presented by Melissa Monosoff MS and Brian Cronin MS. There were eight beers ranging from Germany, Belgium, Ireland, England, and the United States including a beer from Cooperstown, NY which is near my hometown.

A history of beer was given. One item which was surprising is everyone thinks Louis Pasteur was studying milk when he discovered bacteria. However he was actually studying his beer and wondered why his beer went bad. Refrigeration was also invented for and funded by the beer industry.

It was time for the beer tasting and we got to enjoy the eight different styles of beer. None of them was your domestic United States beer even though three of them were from the United States. One beer(?) in particular was very strange and was from Belgium as it tasted like vinegar and no beer that I and many others have had before.

The seminars were done for the day and the hospitality suites opened with different wines to taste. It was another great day at TEXSOM.

Jeff, did you have an opportunity to try the
Estate wines or the Bell amore Vineyard at
Florence wines?

They had the Veritas Cabernet Sauvignon and everybody was told it was a $100 bottle of wine which they all agreed was too much.