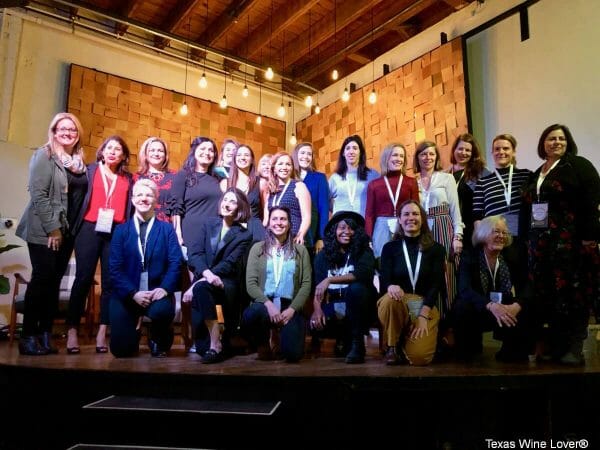 Day One speakers gather before the conference

Women representing all aspects of the wine industry descended on Austin last weekend for the first annual Wonder Women of Wine (WWOW) conference. Organized by Austin sommelier and wine educator Rania Zayyat, the conference was created to establish gender equality in the wine industry and encourage and support women’s unique contributions and experiences in the wine world. WWOW is a new nonprofit awaiting 501c3 status. Texas Wine Lover received a press pass for the conference.

Held at The Sunset Room in downtown Austin, the conference brought together several hundred women (and several men) from all parts of the wine world. From importers to distributors and winemakers to sommeliers, conference participants represented many roles. Attendees came from destinations far and near. The facilitator for the day, Senay Özdemir, flew in from her home in the Netherlands. She is planning the first women in wine conference in Europe to be held later this spring. 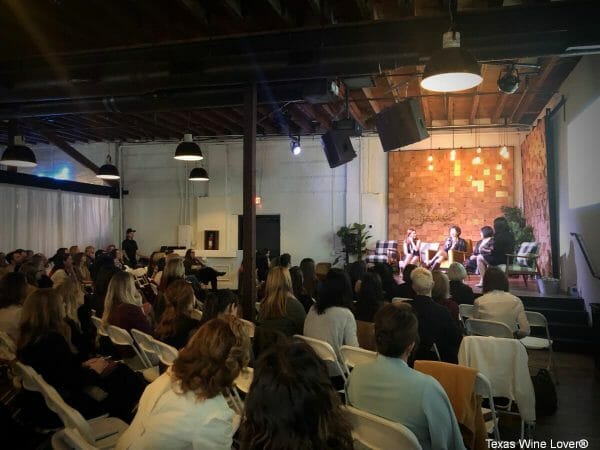 Texas women were well represented at the conference. In addition to winemakers Adrienne Ballou and Rae Wilson on the Texas Winemaking panel, the agenda also featured a number of Texas–based importers and distributors. Southern Glazer’s VP of Multicultural Center for Excellence, April Alejandro, was dynamic on a panel discussing shifting paradigms in the wine world. Peggy Handley of the Wine & Food Foundation of Texas and Mandy Nelson of the ATX Somm Society spoke as well. I spotted Julie Kuhlken of Pedernales Cellars, Denise Clarke of Texas Fine Wine, Christina Chilcoat of Royal Blue Grocery, and Cabernet Grill wine director Elizabeth Rodriguez in the audience.

How does a conference agenda take shape when the issues are complex, and the time is short? First, the WWOW team secured The Wine Bible author Karen MacNeil to be the keynote speaker. Next, a wide-reaching series of panel discussions were planned, giving a large number of speakers an invitation to participate. Many of the women on the panels could have been a keynote speaker in their own right, but these women shared the floor with other heavy-hitters. Finally, the conference needed a closing session speaker who would bring not just wine industry credibility, but would tell her compelling professional and personal story with vulnerability. With confidence and directness, Victoria James of NYC’s Cote Korean Steakhouse brought the audience to its feet with her candor. 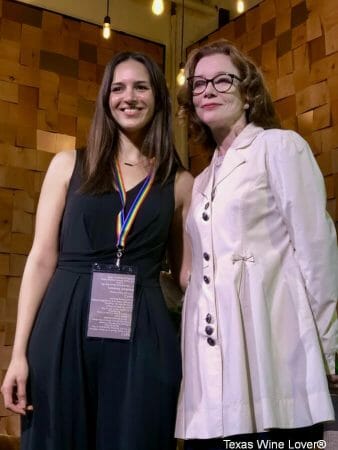 Karen MacNeil was the headliner that perhaps generated the most pre-conference buzz. Her book, The Wine Bible, has sold one million copies and is the best-selling wine book in the United States. Her presentation was titled “A Sense of Place: A New Terroir of Wine Feminism.” In addition to sharing her experiences breaking into the wine industry, Karen shared tips on how women should claim their position in the wine world by watching out for self-sabotaging language, owning our successes, and caring less about likability. Readers of Somm Journal or her website Winesense may have seen her thoughts on the status of women in the wine industry before. Her remarks were based on her essay published in 2017. It can be found here.

Karen shared a new set of updated statistics that were certainly provoking. There was some good news. The gender pay gap for sommeliers is shrinking. However, only 10% of winemakers in California are female, 7% in Washington, and 5% in New York. This is surprising since women have made up an average of 42% of University of California at Davis viticulture and enology graduates for the past 15 years. Last year women made up 62% of graduates. 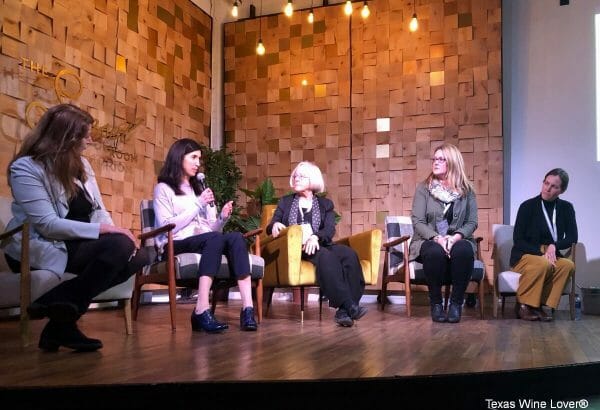 Cathy Corison’s presence at WWOW was a treat for conference attendees. Cathy has worked in Napa Valley since 1975, has bottled 32 vintages, and is revered as a legend. Speaker after speaker referred to Cathy as the original trailblazer for women in wine. Since Cathy was one of five speakers on her panel, her time to share was short. However, her support for each presenter was palpable, and her delight in watching the conference unfold was apparent. After the conference, Cathy was generous with her time, sharing her thoughts and observations on Instagram. Because of her continued excellence in the wine industry, Cathy recently received a James Beard award nomination for outstanding wine, spirits, or beer producer.

Several other speakers with significant national stature added tremendously to the event, despite having a relatively small part on a panel. One was Marissa Ross, wine editor for Bon Appétit Magazine. Her role was two-fold. First, she was part of a panel that discussed the pros and cons of sitting for exams through the Institute of Masters of Wine or Court of Master Sommelier. Rather than pursue either of these paths, Marissa started a wine blog, got discovered, and landed a book deal. Marissa’s other role was to use her stand-up comedy skills to quiet the crowd after breaks. She kept the room in stitches.

Krista Scruggs of ZAFA Wines is trending, especially in natural wine circles. Krista was recently the subject of a Marissa Ross essay in Bon Appétit, and she had many fans in the audience. Krista farms biodynamically using hybrid varieties in Vermont. She lives by the motto “ferment fearlessly,” and this includes co-fermenting grapes and foraged apples. Krista bottles a Texas Pét-Nat that she produces in partnership with Robert Clay Vineyards in the Texas Hill Country. The Pét-Nat is made from Ruby Cabernet, a hybrid cross between Cabernet Sauvignon and Carignan.

It’s a good time for Texas wine, and it’s a really cool time to be a woman winemaker in Texas

The Texas winemakers’ panel was a big hit among attendees. Moderated by WWOW organizer Rania Zayyat, the panel featured Rae Wilson (Wine for the People, Dandy Rosé, The Grower Project) and Adrienne Ballou (Southold Farm + Cellar, Lightsome Wines). The panel was only 30 minutes long, so it just touched the surface on this topic. Adrienne remarked, “It’s really exciting. It’s a good time for Texas wine, and it’s a really cool time to be a woman winemaker in Texas.” Adrienne mentioned one particularly challenging winemaking experience that happened when she got an internship position in Burgundy. The winery was expecting a male named Adrienne. When Adrienne arrived for her job, the winery wanted her to work in the lab rather than the cellar. Rae had a similar experience in her first cellar job. Adrienne and Rae encouraged women who want to be winemakers to learn all facets of the job and not to be afraid of the technical aspects of the work. 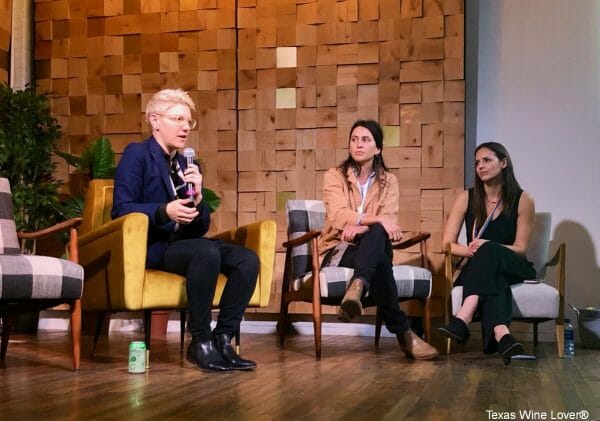 Adrienne stressed that although the job is physically demanding, women are a lot stronger than they think they are. After the conference, she said, “Winemaking and farming is fun and challenging and wonderful work. The feedback from attendees was great. I had several women come up to me after the panel expressing interest in getting into production with some great questions on how to do that. Overall, I had so many wonderful conversations with women about winemaking and am so excited to see more women entering that part of the industry.”

Mentorship was a common theme throughout the conference, and the Texas winemaking panel was no different. Both Adrienne and Rae were thankful for women and men who had mentored them, even for short periods of time. Further, both women expressed gratitude to those who had given them opportunities to access fruit, to make wine under another winery’s permit, and to utilize an existing winery’s space for making wine.

Rae commented after the seminar, “I was really blown away by this weekend. There was such an openness to share experiences, resources, and support. I was so honored to be a part and to have the opportunity to speak. I left feeling a strengthened sense of community.” 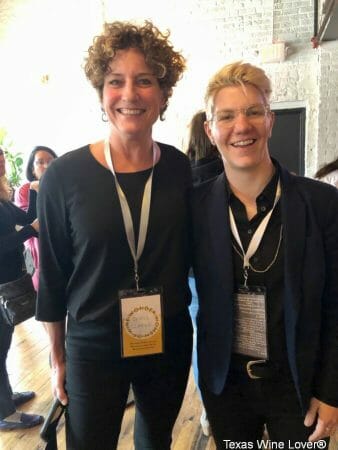 Later in the day, discussions of gender pay inequality, family planning, post-partum depression, and mom guilt shared the stage with talk of securing venture capital, natural wines, hiring practices, and winery marketing techniques. Panelists shared resources for education and financing and encouraged women to ask for what they want. Alison Smith-Story of Smith Story Wine Cellars, recently named a 2018 Hot Brand by Wine Business Monthly, was part of a panel of California winemakers. “We started a winery because I was kinda successful helping others. I thought, let’s do this. Let’s make it happen. Let’s work the math backwards. And I think that being encouraged to do that… I don’t really have a mentor, but I have hundreds of inspiring women in my life that have really sparked ideas and given me the courage to be where I am today. Including you,” she said as she nodded to Cathy Corison. Moderator Senay Özdemir asked, “But where did you learn that attitude?” Without missing a beat, Alison exclaimed, “Oh! I’m a native Texan!” The crowd went wild. 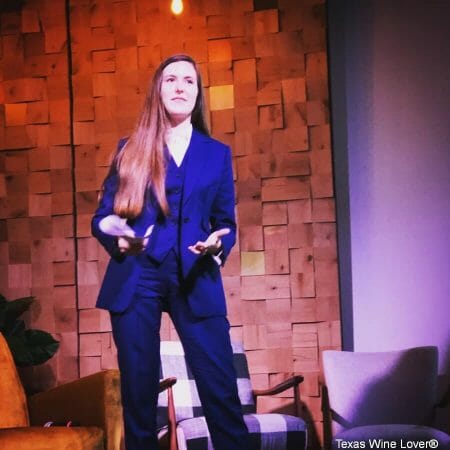 Victoria James’s beverage program at NYC’s Cote was recently nominated for a James Beard award for outstanding wine program. Victoria for ended the day by sharing a series of heartfelt essays on failure, insecurity, and love. Her forthcoming second book is titled, “Wine Girl: The Obstacles, Trials and Tribulations of the Country’s Youngest Sommelier.” By sharing her story of sexual assault and survival, Victoria opened the door for other survivors to share their tales of triumph. Victoria received an enthusiastic standing ovation following her reading.

The second day of the conference featured several breakout sessions as well a tasting opportunity with dozens of wines made, owned, or imported by women. Cheers to the organizers for pulling together such a dynamic lineup of interesting speakers and networking opportunities. Here’s hoping that WWOW gains traction in Texas!