Alexander Vineyards is located in Fredericksburg and is owned by Claude Alexander. The winery opened July, 2013. When I visited with some wine friends, Claude was providing tastings in his house by appointment only but the Alexander Vineyards tasting room will be opening officially on September 19th. He is hoping to break ground and open the winery in the first quarter of 2014.

I had followed Alexander Vineyards on Facebook and the progress they were making in getting their wines from Europe. As we learned during the tasting, Claude gets his wines from Germany and Bordeaux in France. Later this year he is planning on adding wines from Italy and Spain. He will make some wines here but still plans to import some wines. The wines he makes here will be made with California fruit until he can get quality Texas fruit.

We sat at Claude’s kitchen bar and he poured his wine from wine bottles which used both corks and screw caps. We tasted five wines in total and all were great. Claude Alexander is a big fan of Champagnes which shows from his selection of fantastic Champagne offerings. 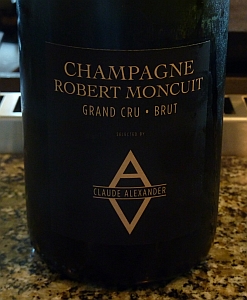 First was a Champagne Robert Moncuit which is a Brut made with 100% Chardonnay, 80% from the 2010 vintage and 20% of the 2009 vintage. It is composed entirely of Grand Cru fruit as all of Alexander Vineyards Champagnes are from Grand Cru vineyards since they are true Champagnes from France. They will be offering five Champagnes and they use composite corks. Robert Moncuit is located in Le Mesnil-sur-Oger in the heart of the Côtes de Blancs in Champagne. 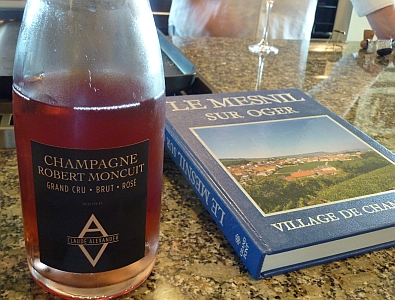 We then tasted a Champagne Robert Moncuit Rosé which was the first rosé ever made at the winery and they did it only for Alexander Vineyards. Claude told the story how the winery kept telling him they didn’t make a rosé Champagne, but he insisted he wanted one and they eventually did. After making it, they liked it so much they decided to add it to their own labels! It is made from 86% Grand Cru Blanc de Blancs Brut Champagne with 14% of Grand Cru Pinot Noir from Ambonnay in Champagne. According to Claude, most rosés are a blend of 8 percent red plus or minus 1 percent and theirs is 14 percent. The additional red adds depth and complexity to the wine in addition to providing a little dryer rosé.

Next up was a Riesling from the Bernkastel village in the middle of the Mosel region of Germany. Having a Riesling from Germany brings the minerality into the Riesling. Alexander Vineyards plans on providing this one and next year three more are planned. Screw caps are used on the Rieslings. 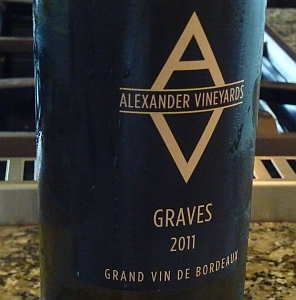 Another white wine tasted was a 2011 White Graves (pronounced grahv). Graves is a subregion in the Bordeaux wine region. The wine is made from 55% Semillion and 45% Sauvignon Blanc with 8 months on lees in both French oak barrels and tanks. The White Graves won a Gold medal in Paris which is the second most important competition in France.

As we were learning how to pronounce Graves, we found out Claude is originally from Canada so he has no problem pronouncing the French words. He said trying a 1994 Latour wine changed him into loving wine.

The last wine was a 2010 Red Graves which is a blend of 55% Merlot and 45% Cabernet Sauvignon. The wine spent 12 to 14 months in both new and one year old French oak barrels.

Other wines currently available for purchase are a Demi-Sec Champagne and Extra-Brut Champagne. Four more wines will be available in the coming months. 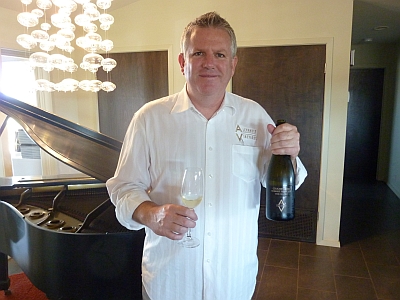 We had a great time doing a tasting with Claude Alexander and look forward to visiting again when the tasting room opens and eventually when the winery is built.