We now have an annual ritual to visit the Hill Country the weekend of Memorial Day and meeting up with friends Dave and Kelli Potter of The Grapes Around Texas and future Mary Elizabeth Vineyards along with Laurie and Shelly Ware of Wine’s At Roads End on a road trip. This year we stayed at the Lazy T Bed and Breakfast like we did last year.

Unfortunately Gloria had to work again on Memorial Day but this year we were both able to take Friday off to still have a three day weekend. Gloria had the first choice as where to go so we headed first to Duchman Family Winery. I had been there recently and did a full tasting in February, so we did a tasting of what was new and what Gloria had not tried. One wine was the Tempranillo 2012 from Bayer Family Vineyards which was new since my last visit and it, of course, was very good.

The next plan was to eat lunch but Gloria decided 11:30am was too early to eat lunch so that gave us time to stop at another winery, Spicewood Vineyards. We were fortunate on the Friday that owner Ron Yates was present and he took over our tasting. We had met Ron briefly before, but the tasting allowed us to have a long conversation. Ron was very energetic about everything and we had a lot of fun doing the tasting with him. 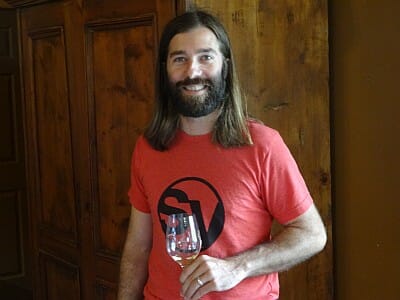 Ron told us about a new winery he will be opening on US Highway 290 west of Johnson City. They do not have a name for it yet but there are already two acres of Tempranillo planted there with more planned on being planted. In fact, winemaker Todd Crowell was at the new location helping with building a high fence around the vineyard. Ron showed a lot of enthusiasm about the new winery which has a hopeful opening date of summer 2015.

During the beginning of our tasting, Laurie and Shelly Ware showed up to join us in the tasting. Some of the wines we tasted were:

Ron then offered to take us downstairs to the barrel room. We first encountered a Spanish wine vat still packaged which holds 300-500 gallons. Ron said they were not sure what they are going to do with it yet, but it had arrived safely. 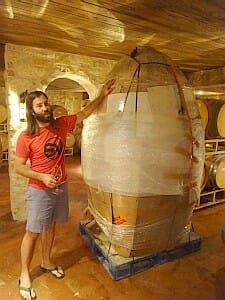 We then did a couple barrel tastings of new wines not ready yet for release. The first was the 2013 version of The Good Guy. The Good Guy is a wine made in honor of Ron Yates’ grandfather, Tommy Joe Yates. The new version will have a little more Graciano in it. Another new wine tasted is a 2013 Texas blend they will be calling Frost Protection. The name and blend came from them saying, “Oh crap, let’s go find some grapes!”

We had a great time at Spicewood Vineyards and as we found with all wineries we have re-visited, everybody is getting better each year which makes sense since all are learning by experience and it is usually a yearly process.

We thanked Ron for his time spent with us and Gloria and I headed off to Flat Creek Enoteca. The Wares went in another direction to a different winery.

Saturday came and the first winery all three couples were going to meet at was Hawk’s Shadow Winery. We arrived at our appointment time of 10:00am and met Doug and Tom Reed there. Their current winery and tasting room operates out of their crush pad building while the actual tasting room gets built adjacent. The drawing of the planned building looks great and will provide a great view of the neighboring hills and vineyard. 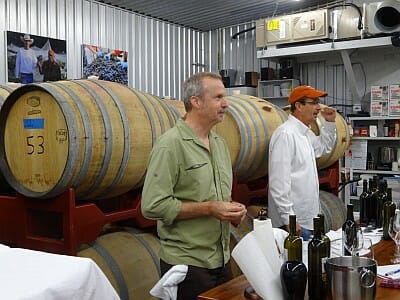 The first time I visited there were only a couple bottled wines and this time there were more for the group to enjoy. The new wines had all been bottled one to two months prior. From some questions asked by others, we all learned the name of the winery comes from a horse they used to have called Hawk’s Shadow. The two estate vineyards have an elevation between 1,000 and 1,100 feet.

Some of the wines we tasted were:

We then interrupted the bottle tasting for some barrel tasting and this is what we were able to try:

We returned to their first major bottled wine, the HSV 2011 estate wine made from 60% Sangiovese, and a field blend of Tempranillo, Syrah, Grenache, and Mourvèdre. It was aged for 26 months in new Hungarian oak. A field blend are different varieties of grapes planted in the same vineyard and co-fermented together during the winemaking process.

The visit to Hawk’s Shadow Winery was a great start to the day and we thanked Doug and Tom for their time. It was now time to make our next appointment which was Lewis Wines.

As we drove down the long road to the tasting room, there were a number of newly planted vines in a couple vineyards. When we asked later, there were 5.8 acres of vines planted at the winery including the varieties: Touriga Nacional, Tannat, Tinta Cão, Alicante Bouschet, and Arinto. 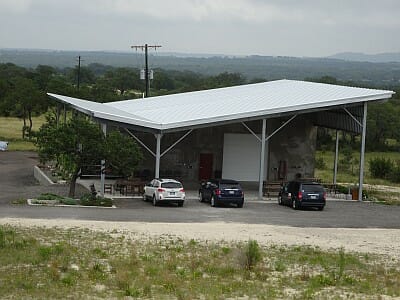 We were a little late for our appointment and co-owner Doug Lewis was in the process of finishing up a tasting from another group. He made room for us in his production area (same situation as Hawk’s Shadow Winery) and we begin a tasting.

These are some of the wines we tasted:

In the middle of our tasting, co-owner Duncan McNabb came in and started helping another group who had arrived. We were all getting lucky to get a sneak preview of upcoming wines from the barrel and newly bottled. The ones we tasted were:

It was another great visit to Lewis Wines and our Saturday was really going well! Next up just a little bit down the road was Hye Meadow Winery.

There we first met manager Chris Black followed soon by co-owner Denise Batek. Chris started us on a tasting. There are two sets of flights for a tasting fee each. One flight is called “Hye Aspirations” which includes eight white and red wines. The other is called “All Red All The Time” which includes five wines. 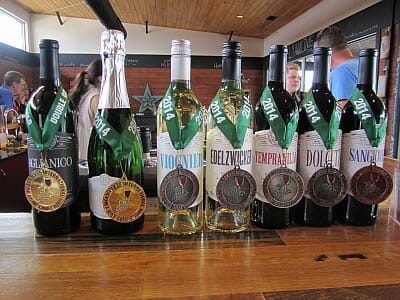 The tasting room was getting a lot of traffic and the wines were tasting great as usual. It is amazing that our group of three couples were at the winery one year ago and the winery was still under construction. Now they are a hustling and bustling winery with lots of traffic, live music, and food trucks available. What a difference in such a short time!

Speaking of food, it was time for some lunch and we all enjoyed the pork barbecue which was being offered that day. We saw co-owner Mike Batek tending the back bar and after lunch went to visit with him. Denise soon came back and we met their daughter Karina.

Chris Black along with Karina, Mike, and Denise Batek

Mike, being the ever gracious friend, offered to take us to the production building and let us try some barrel samples. We brought glasses in hand and made the short walk to the building. These are some of the wines we tried:

We thanked Mike for his time because we were a little late (a somewhat common theme that day) for our next appointment. Next up was a tasting at the new Reserve Tasting Room at Pedernales Cellars.

We arrived at Pedernales and met Fredric Osterberg and Julie Kuhlken in the main tasting room. They guided us to the Reserve Tasting Room where we had a great time you can read here.

After the Reserve Tasting Room, some of us partook in the other wines available in the main tasting room. Afterward, Jeremy Wilson gave us a tour of the production area at Pedernales Cellars. We learned quite a bit and if they’re lucky, they’ll be making 15,000 cases of wine this year. The luck comes because hail hit the Hill Country at the beginning of May. 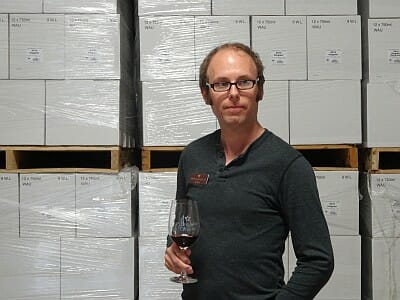 The top part of the production area was originally 4,000 square feet and they just added another 4,000 square feet. One interesting tidbit was that winemaker David Kuhlken prefers using basket presses instead of bladder presses. 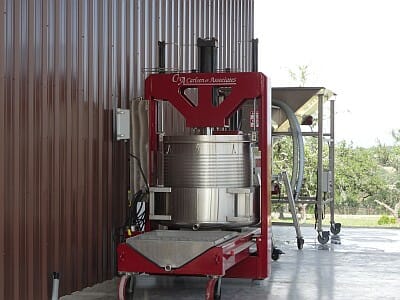 By the way, if you haven’t read them yet, Jeremy Wilson has been doing wine reviews on this site.

The last visit of the day was going to be at Fly Gap Winery. Fly Gap Winery is owned by Brock and Melissa Estes and Brock was excited to show us the sunset from his east Mason location.

We drove through unpaved roads and eventually found the location for Fly Gap Winery. Brock Estes met us when we pulled up and he gave us a tour of the home of Fly Gap Winery. Brock is planning on doing his winery in the old style of wineries. In the back in some older buildings which are being remodeled will be a tasting room and game room. We visited the production building which is where Brock is really going old world style. 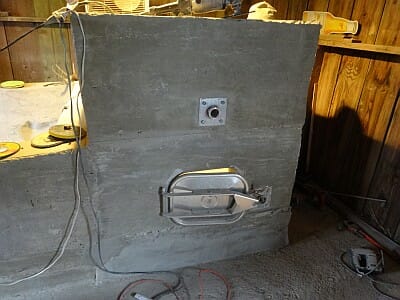 The DANK wines he currently offers are being made in other wineries, but he plans on making his wines in cement vats using concrete fermentation and then being transferred to barrels or holding tanks with the flow of gravity only. He really wants to keep the concrete vats as they are, but is pretty confident he will need to line them with epoxy just as Gloria and I have seen wineries in Mendoza do the same with their concrete tanks. 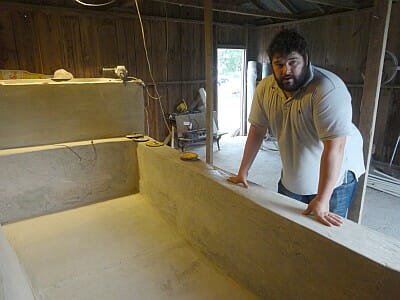 After our tour we sat down at a nearby picnic table and enjoyed some wines while the sun set. Unfortunately it was cloudy so we did not see the great sunset we hoped, but we did have an enjoyable time talking and drinking wine into the dark.

On Sunday, Gloria and I had to head home while the others could continue their visits to other wineries, but we all did manage to make a visit to new winery Fat Ass Ranch & Winery which you can read about our visit here.

It had been another enjoyable Memorial Day weekend and we already are starting to think what we want to do next year.