Hilmy Cellars is a new winery located in Fredericksburg and opened March 17, 2012. It is owned by Erik Hilmy who is also the winemaker producing Texas wines.

Erik Hilmy planted Sangiovese in 2009 which is in a vineyard beside the winery. They also plan on planting a vineyard in front of the winery. In the vineyard on the side of the winery you can see guinea fowl roaming around which makes for excellent pest control. Because of the birds’ appetite for insects, Hilmy Cellars does not need to use pesticides on the vineyard. 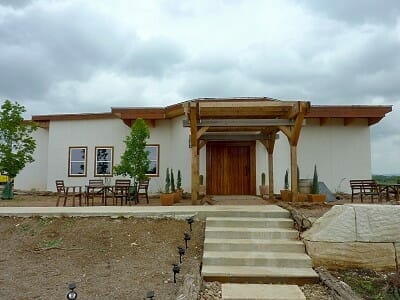 We arrived at the winery and opened the large wooden door at the front of the winery. You can see a photo of the door on their website and the hinge on the door is not on the very edge like most doors, so it makes for a unique entry into the winery.

At the tasting bar were two guides and the one who primarily helped us introduced himself as Mark Hilmy, Erik Hilmy’s younger brother. He showed us the tasting menu which included four wines we could taste. All of Hilmy Cellars wines use 100% Texas grapes. If the grapes do not come from their vineyard, then they use either Lost Draw Vineyard or the Young Family Vineyards, both located in the High Plains. 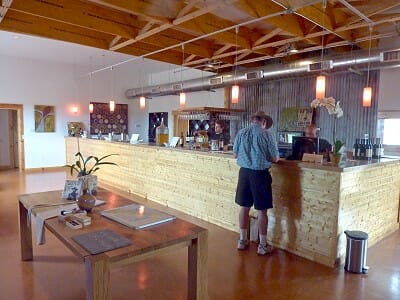 There is a tasting fee which includes all of Hilmy Cellars Texas wines right now, a total of four. If you buy a bottle of wine, the tasting fee is complimentary. Hilmy Cellars use corks and screw caps in their wine and tastings are poured from the bottle. You do the tastings standing at the tasting bar but there are some tables available to sit and enjoy a glass of wine.

The first wine tasted was Doo-Zwa-Zō which is a blend of Chardonnay and Chenin Blanc using fruit from the High Plains. There were 330 cases made of this wine.

Before we started tasting, Mark called his brother and during our tasting Erik Hilmy arrived at the winery to say hello. 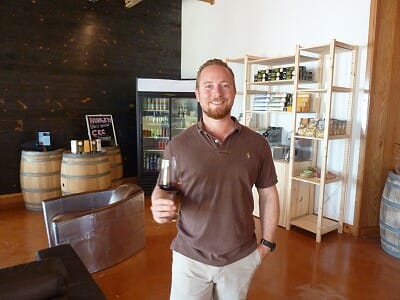 The red wines came next and the first was called The Temp which is a blend of Tempranillo, Mourvèdre, Sangiovese, and Carignan. The grapes came from the High Plains and 330 cases were made.

Finally was Hilmy Cellars’ Tempranillo made of grapes from Lost Draw Vineyards and 220 cases were made. The Tempranillo used a second-generation barrel instead of a first year. We learned Erik does not like a lot of oak in his wines, hence the second generation barrel.

After our tasting, Erik took us to the back of the winery in the production room where the barrels and tanks are located. He pointed out some barrels of wine made from California fruit which he may never make available. He also had a tank with Gewürztraminer and after learning we liked Gewürztraminer, he let us sample some from the tank. It was cloudy but even at the young stage you could tell it was going to be a great wine.

Erik is a perfectionist and it shows with the quality of his current Texas wine. When we had arranged to meet him in December and were unable to, he admitted he was kind of glad because at the time he only had two wines ready. He thought letting us taste four of his Texas wines would give a better impression.

Hilmy Cellars has a gift shop with food items such as crackers, cheese, bread, brownies, soft drinks, etc. A pizza kitchen will soon be available when the permit is done to offer other food to purchase. Also available in the gift shop are paintings, pottery, and books. Noticeable were copies of Russ Kane’s book, The Wineslinger Chronicles, and they said some of his books available to purchase were autographed.

Since there is somewhat of a theme involving birds at the winery, Hilmy Cellars has a wine club called the Flock.