The conference was held in a church at Metro State College Campus in Denver. The day before the conference I found the campus using my GPS just so I understood where parking would be the next day. On the morning of the conference, I volunteered to drive Olivia Wilder who was going to be holding her radio show during the Twitter Taste-Off, and had her equipment to bring. I got my car and then realized I had left my GPS in the hotel room. With the Sheraton Downtown being a maze of corridors and elevators, it would have taken some time to go back up to the room to get the GPS. Olivia was very understanding and patient when we got lost, but we eventually found the campus using the map on my smartphone. GPS’s are great, but sometimes you can depend on them too much.

We arrived in time for the start of the conference and the first seminar was titled “Colorado’s Terroir and the Challenges of High Altitude.” There was a panel of four people, like each of the following two seminars, and they discussed the problems with growing grapes in Colorado.

Most of the vineyards in Colorado are in the western part of the state. The biggest counties which produce the most grapes are Mesa and Delta. Riesling, Cabernet Sauvignon, and Merlot are the most popular varieties grown. 2009 had winter damage and they are still recovering from it and as a result, some growers are downsizing or exiting the industry.

A big advantage of growing in Colorado is there is no phylloxera on the Western slopes. Pest control is usually not a problem in the vineyards. Colorado has low humidity which results in low disease problems whereas frost is the greatest concern. Most vines are also on their own rootstocks.

Vineyards are in competition for space though with more lucrative peach orchards. Panelist Horst Caspari, Professor and State Viticulturist at Colorado State University, even admitted if he wanted to make money, he would grow peaches.

The next seminar was “Local Food, Local Wine, and Why They Don’t Like Each Other.” The issue of trying to get people to drink local wine and food was discussed. Colorado has some of the same issues with local food and wine as Texas does. People want to eat and drink local but when they go to a restaurant, there are no Colorado wines on the wine list. René Chazottes, director of wine and master sommelier at the Pacific Club, said what is very true. A customer can go to a restaurant wanting to drink local wine. But if they are expecting a certain style of wine and the local wine is made in a different style, they are confused and they switch to what they know which happens to be non-local. Dave McIntyre of the Washington Post and co-founder of DrinkLocalWine made a good point when saying, “The wine has to be good no matter where it comes from.” 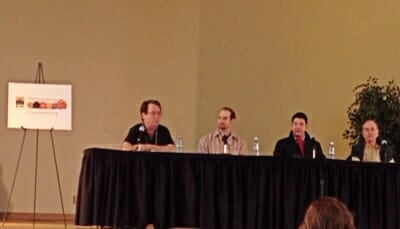 Evan Faber, Beverage Director at SALT, was very energetic with some of his ideas to get people to drink and eat local. Jensen Cummings, Executive Chef of Row 14 Bistro and Wine Bar, said most people who drink Colorado wine are people who come from out of town looking for something local. They need to get Colorado residents to learn to drink local wine.

The final seminar was “Consumer Perception of Colorado and Regional Wine.” This panel included “normal” consumers of wine which included Chris Anthony, professional skier, Jennifer Broome, KDVR-TV meteorologist and host of ” Explore Colorado,” and Jay Leeuwenberg, former NFL player. They provided their perceptions of why they may or may not drink local wine. There were a lot of great ideas to try and get residents to drink more local wine, but most people have made the same suggestions before such as festivals and using social media. Again, the pricing for local wine cannot be much more than other wines if it is desired to drink local wine. 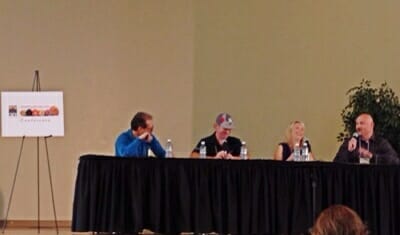 Next came the Colorado Blind Challenge where three panelists were going to do a blind tasting pairing three Colorado wines with three California wines. As a surprise to us, they had found enough wine glasses in Denver and we were all going to do the blind tasting with the panelists. The first pair of wines were white and I correctly identified them as Rieslings. I was impressed even though nobody else was. 🙂 The next turned out to be Viogniers and the last were Cabernet Francs. I’ll be honest that I didn’t get any pairing correct as to which the Colorado wine was. That is just how good they were. It was a fun time had by all trying to do the guessing. 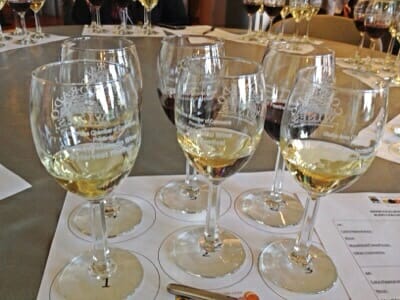 After a nice lunch it was time for the Colorado Twitter Taste-Off sponsored by Nomacorc. 24 Colorado wineries had two wines each and we had three hours to taste as much as possible, tweet about them, and basically have fun doing so. The #drinklocal #colwine hash tags on Twitter were flying around during the tastings. It was an experience getting to taste and try to come up with roughly 100 characters to tweet about the wine. This was my first tasting of this kind and I had to use the dump bucket otherwise I would not have been able to walk out of the room. I still could not do the spitting part though and from looking around, not many others did either. Everyone then voted on their best white, bed red, and then either the people’s favorite or media’s favorite wine. Awards were then given to the favorite wines.

After a long day, another successful DrinkLocalWine conference was over. Everyone enjoyed themselves and I know for sure that if I can make it, I will be attending the next conference too.