I’ll admit I had not heard of Nomacorc until I was reading my Twitter feed and saw Paul Bonarrigo from Messina Hof had answered a question from somebody asking about cork taint. He said he was not concerned with cork taint because he was now using Nomacorc closures at Messina Hof.

After I decided to go to DrinkLocalWine’s conference DLW 2012, I noticed that Nomacorc was sponsoring the Colorado Twitter Taste-Off. Here was their name again.

We are VIP members at Messina Hof and one of the many benefits are quarterly VIP receptions. We went to the first VIP reception of this year and I made a point to speak to Paul Bonarrigo about his comment on Nomacorc. He said he loves them and is using them in Messina Hof’s wines which are usually priced under 15 dollars. Using Nomacorc closures will avoid any potential cork taint. He said the closures insert and extract very easily and they have been getting great feedback from their customers.

I found Messina Hof’s switch to Nomacorc closures very interesting. We have taken more than a few tours at Messina Hof with different tour guides, and I remember at least one commenting by their wine bottling machine how Paul uses only natural corks and would probably never change. Obviously never say never as new and improved technology is always happening. 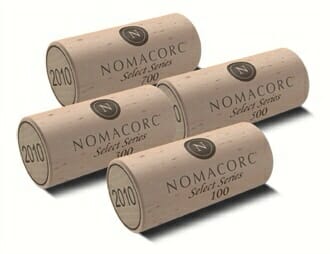 I then had to do some research on Nomacorc to learn more about this closure. I learned that Belgian businessman and wine connoisseur Gert Noël got the idea to create an alternative wine closure at a family party after opening several bottles of wine that had been ruined by cork taint. Noël and his son Marc started in 1993 to create a wine closure based on foam extrusion technology. The team spent six years in research and development before introducing the first Nomacorc closure. The company was established in 1999 in Zebulon, North Carolina, by Marc Noël.

Nomacorc has now become the world’s largest producer of alternative wine closures. Since their formation, they have expanded into the European market with the addition of operations in Eupen, Belgium and Yantai, Shandong, China.

Interestingly instead of it being a solid closure by looks, each closure consists of a foamed inner core layer and a flexible outer skin. Nomacorc closures look and feel like a natural cork while addressing the problems of cork taint, breakage, crumbling, and inconsistent wine preservation. Nomacorc now has a portfolio of wine closures with each one designed for different winemaking styles and makes billions of closures a year. Their latest is called the Select Series which has four unique products.

Opening a bottle of wine which did not use a natural cork never bothered me before. But from now on I will be looking at the alternative closure I might pull out and appreciate the benefits of using them