When I decided to go to DrinkLocalWine.com’s conference DLW 2012 in Denver, I quickly made airline reservations. Later I learned some of the other attendees were going to take a full day tour on Sunday of various local wineries around Denver and Boulder. Unfortunately my return flight was already scheduled for Sunday morning so I decided I would do my own winery tour as soon as I arrived Friday morning.

As soon as I got my rental car, I was off to the first winery which opened early, Bonacquisti Wine Company. Bonacquisti is located in an urban wine tasting facility called Colorado Winery Row which consists of wineries Bonacquisiti Wine Company, Cottonwood Cellars, The Olathe Winery, Garfield Estates Vineyard & Winery, and Verso Cellars. Colorado Winery Row opened in March 2010. 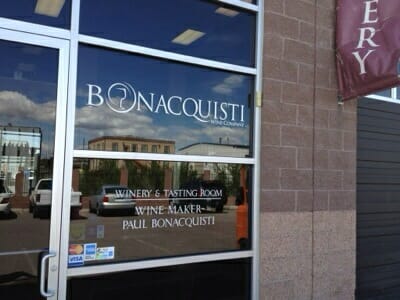 As I learned when I arrived at the winery, Paul Bonacquisti is the owner/winemaker and also the person that greeted me when I went in. Well okay, his gentle big dog first greeted me. Paul led me through a tasting and then told me about his jug refill program. He already does keg wines for restaurants and since he has those already, he pours wine by the tap for a jug. That is, a customer can buy a one liter bottle for $20 and get it filled with whatever is on tap. They can then bring that same bottle back and get it refilled for $13. What a fantastic idea! This is cheaper for the winery because they don’t have to bottle everything and cheaper for the customer since they are getting a one liter bottle of wine for a lot less. 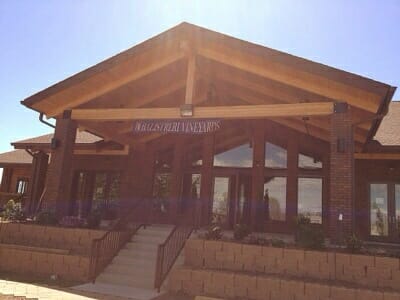 Next up was nearby Balistreri Vineyards. I found the winery and the unique thing at this winery was all the wines they make are natural. This is just like La Cruz de Comal where they do not add sulfites, filter their wine, etc. So the white wines are not clear in color. They have four whites currently on the tasting menu and 15 red wines. They do not do blends and adhere to straight varietals. Interesting of note is their dry orange muscat. This wine is completely different than the ones we did in our blind tasting of Texas Orange Muscats, so it would have been interesting to see how it would have compared. 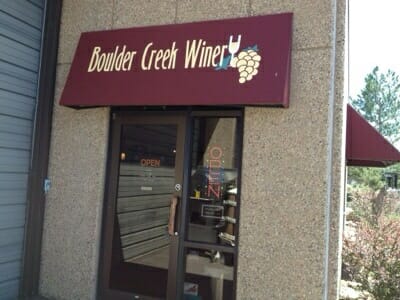 I found Boulder Creek Winery easily enough and enjoyed a thorough tasting even with a bee who had sneaked in the door flying around my wine, but was eventually caught and released. One wine which was an interesting concept was their Concensus Reserve. This wine is a yearly blend which the wine club members choose their favorite barrel wines and the winery makes the blend from the top favorites. This particular year’s version was from four varieties.

I had a great time visiting some Colorado wineries and drinking local Colorado wine, but it was time to check into the Sheraton hotel and meet some Twitter friends for the first time. I’m looking forward to Saturday’s DLW 2012 conference to learn more about local wine and enjoy the Nomacorc Colorado Twitter Taste-Off.