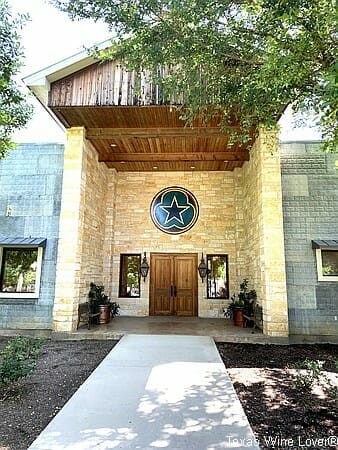 Brennan Vineyards is one of the winery partners who helped establish Texas Wine Collective back in 2010. The other partners are Lost Oak Winery in Burleson, TX, and McPherson Cellars in Lubbock, TX. These partners were keen to make their wines available to the many visitors to the Fredericksburg area and decided the best way to do that was collectively build and open a tasting room on U.S. 290 (Wine Road 290) about eight miles east of Fredericksburg. Wines from each of the partners are available for tasting and sale in the beautiful TWC tasting rooms and are presented to wine club members in allocations throughout the year. 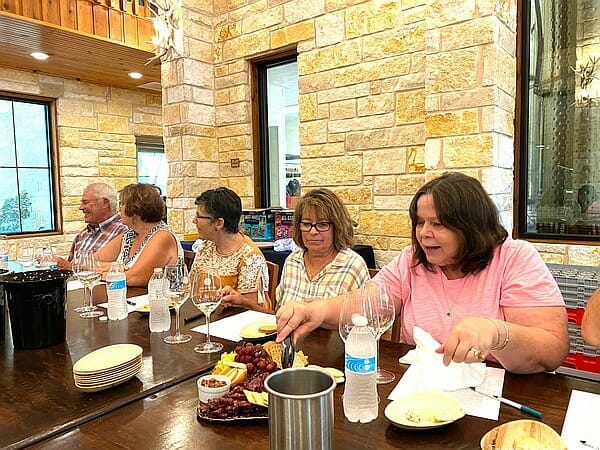 A mix of wines from Texas, other U.S. wine regions, and other countries were included in the tasting. The plan was to discuss similarities and differences involved in grape growing and wine making in order to gain a greater appreciation for what is required to deliver quality wines to consumers and enthusiasts, not only in the Lone Star State, but around the globe. In addition, Todd Webster and his team had recently bottled six new red wines and the group was eager to taste these bottlings, some as yet unreleased (see more below). 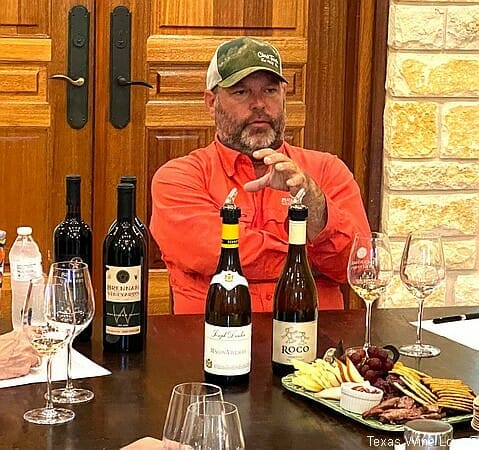 The tasting opened with Chardonnay, a grape that can produce delicious wines in Texas, but unfortunately, due to climate conditions, the number of examples are limited. Todd had produced an outstanding Chardonnay back in 2010 and that was a key part of the discussion. However, Brennan no longer has access to that grape source, so no more Chardonnay bottlings have been produced. The group enjoyed tasting the four Chardonnays served while listening to Todd’s and Carl’s discussions on growing and making such wines.

The next set of wines included more whites, a Ribbon Ridge Riesling from Oregon, an Airis’Ele Vineyards Texas High Plains lightly sparkling Moscato, and Brennan Vineyards Viognier 2010 Texas. Viognier has become the signature wine for Todd and Brennan Vineyards, and it was a treat to taste this nearly 12-year-old wine that was still delicious and very much alive. 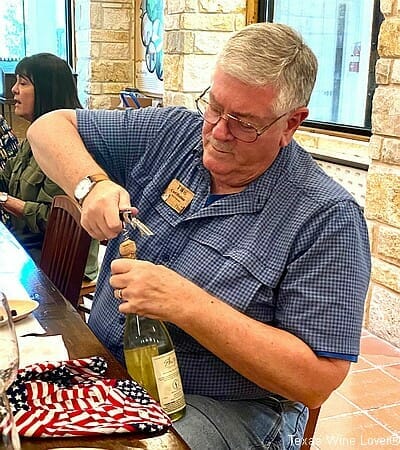 The author, Carl Hudson, opening wines for tasting by the group

At this point the tasting took a turn to the “dark side” as focus switched to red wines. A delicious Oso Estrella Pinot Noir produced from California fruit by Ron Yates Wine and two Rhône-style blends came next. These were followed by a Syrah comparison that included the stellar Brennan Vineyards Syrah Reserve 2015 Comanche County Texas served alongside the ten-year-old 4.0 Cellars Syrah (by Brennan Vineyards) 2012 Comanche County Texas, and a tank sample of Brennan Vineyards Syrah 2019 Texas (not yet bottled). The group was delighted with these wines and there were many positive comments expressed about them and the efforts by Todd Webster and his team to produce them. A delicious snack prepared by Carl Hudson was served with these red wines. 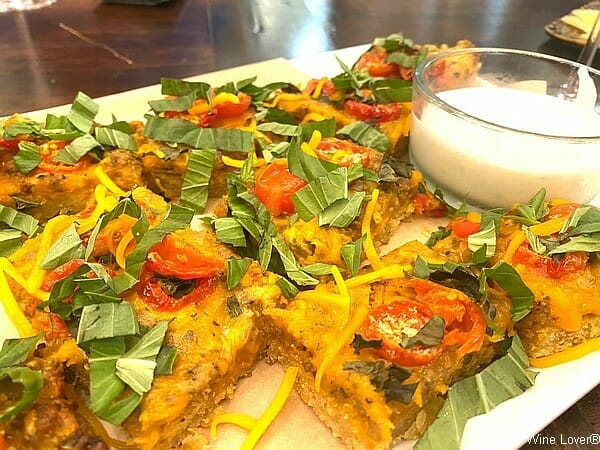 The next comparison was for Cabernet Sauvignon and included Becker Vineyards Cabernet Sauvignon Reserve Canada Family Vineyard 2017 Yoakum County Texas High Plains paired with Brennan Vineyards Winemaker’s Choice IV N.V. Texas, a delicious blend that contained 78% Cabernet Sauvignon plus Syrah and the Italian variety Aglianico. This W IV bottling has been a favorite from the Winemaker’s Choice series that has now reached volume VII. These W bottlings are produced each season from cellar selections, different varieties and vintages, that Todd carefully chooses to blend into his top-level wine. The non-vintage Ws are among the favorite Brennan Vineyards wines produced each year. 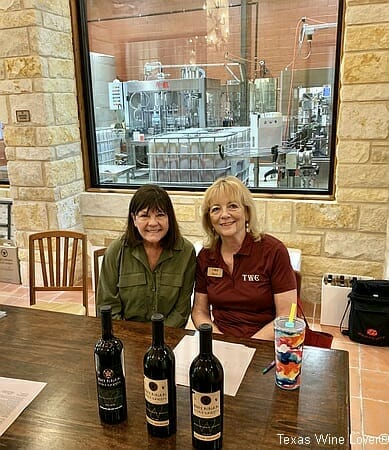 Marsha Ossowski, Sales Manager for Brennan Vineyards, and Marie Schwartzkopf, Tasting Room Associate for Texas Wine Collective getting ready for the tastings (with the bottling room in the background)

The following comparison was Brennan Vineyards Graciano Reserve Lahey Vineyards 2018 Terry County, an absolutely delicious wine that is just now reaching its peak, and the recently bottled Brennan Vineyards Graciano Lahey Vineyards 2019 (80% Graciano, 10% Carmenere, 10% Cabernet Sauvignon). It was clear to everyone that the 2019 needed more time in bottle, probably 1-2 years, but showed great promise to challenge the 2018 version. Graciano is a dark, rich red grape variety grown in the famous Rioja region of Spain and often used in blending with Tempranillo. It grows well in Texas and can be produced as a varietal wine, like the above, or used to enhance Tempranillo and other red wine blends.

The final pairings included newly bottled wines that represent what I call the “cream of the crop.” Brennan Vineyards Tempranillo 2018 Texas is an amazing blend comprised of about 90% Tempranillo plus a small portion of two other blends, Super Nero 2019 and Winemakers Choice VII N.V. This Tempranillo has been a big hit with tasters in both the Brennan and TWC tasting rooms – rich dark fruit, lush finish, beautifully balanced. Then came Brennan Vineyards Super Nero 2019 Texas, always a favorite, and the next volume of Brennan Vineyards Winemaker’s Choice VII N.V. Texas. Both were outstanding, and we await anxiously for their release.

As a final treat, Todd poured samples of a 2018 blend that will eventually be labeled as a tribute wine to the late Dr. Pat Brennan who we all miss terribly. This was big, lush, rich in fruit and toasty oak, a wine that will be a treasure for all who procure a bottle or two when released. 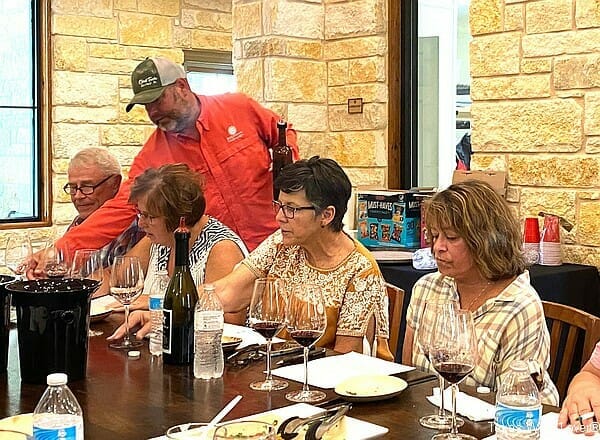 Before finishing this story, it should be noted that Brennan Vineyards is not privileged to be included in one of the eight Texas AVAs (American Viticultural Areas). They are pretty much limited to using on their wine labels the regional appellation of Texas or the Comanche County designation. Since Texas is considered a regional appellation, federal regulations require a wine to contain only 75% grapes grown in Texas. That leaves a lot of room, 25% room, for grapes that may NOT be from Texas. However, recent legislation designed to promote better “truth in labeling standards” was signed into law by Governor Abbott in the summer of 2021.

This new law, effective September 1, 2021, requires any wine labeled with a Texas county, AVA, or vineyard designation to follow more stringent requirements, essentially setting labeling standards for these wines to contain 100% Texas grapes. Thus, even though Brennan Vineyards is not in an AVA, the designation of Comanche County on their labels assures the consumer a Texas wine containing 100% Texas-grown grapes. Here is a simple graphic to help you recognize label designations and what they now mean for Texas wines. 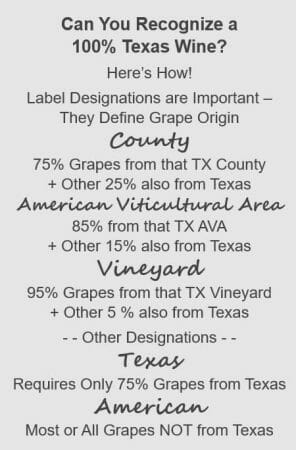 In closing, two points seem noteworthy. First, it was tremendously gratifying to hear comments from the Brennan Vineyards wine club members after listening to all the technical and geeky discussions about the wines being served as they expressed their appreciation to Todd Webster and the vineyard/winery team for the technical expertise, special handling, and amazing effort put into the Brennan wines. One comment was particularly apropos as the person noted that they have always thought a great deal of Todd, but now have a much greater appreciation for what he does as a winemaker.

And finally, I want to thank my friend Todd Webster, the Brennan Vineyards staff, the enthusiastic wine club members who attended, and Marie Schartzkopf, my companion on this adventure, for making this a fantastic visit and tasting.

References:
The Texas Wine Lover website, created and maintained by Jeff Cope, is a great source listing most of the wineries and vineyards located in the Lone Star State.

Alcohol and Tobacco, Tax and Trade Bureau (TTB), Code of Federal Regulations – 27 CFR part 9 details the requirements for developing a petition to create an AVA.

Appellation America – An Introduction to the Texas AVAs, by Eleanor & Ray Heald, December 1, 2009.

For additional information, Texas AVAs were discussed in two recent Texas Wine Lover posts – What and Why? (Part One of Three) (March 2022)

The Eight Texas AVAs – Size, Boundaries, Climate, etc. (Part Two of Three) and a third post that will be published in the near future – Texas Areas Not in an AVA; Tightened Label Designations and Efforts to Create Additional Texas AVAs (Part Three of Three).