Governor Greg Abbott, 48th Governor of the Great State of Texas, and First Lady Cecilia Abbott hosted a special wine and food pairing event featuring the wines of Brennan Vineyards of Comanche on April 18th. The Governor and his wife are both interested in wine, enjoy sharing wine with friends, and visiting wine regions to learn more about this fascinating beverage. The Governor and First Lady have a great appreciation for the Texas wine industry, and this event was an opportunity to not only share Texas wine with a group of friends but showcase the high level of quality that many Texas wines now display.

Representatives for Brennan Vineyards for this evening were proprietors Pat and Trellise Brennan, winemaker Todd Webster, business and marketing manager Rebecca Conley and her husband, Travis Conley, who helps in vineyard management and handles numerous other tasks at Brennan Vineyards. Because of my connection with Brennan Vineyards through their partner/owner role at 4.0 Cellars, I was asked to participate and help present the wines. Jason Hisaw, who handles Brennan Vineyards distribution as Texas Portfolio Manager for Republic National Distributing Co., was also a part of the team.

We all went through a relatively rigorous security check at the front gate of the Mansion. Everyone had already submitted information prior to the event for a routine background check. All of this obviously took time and effort, but that seems to be necessary in these days and times. 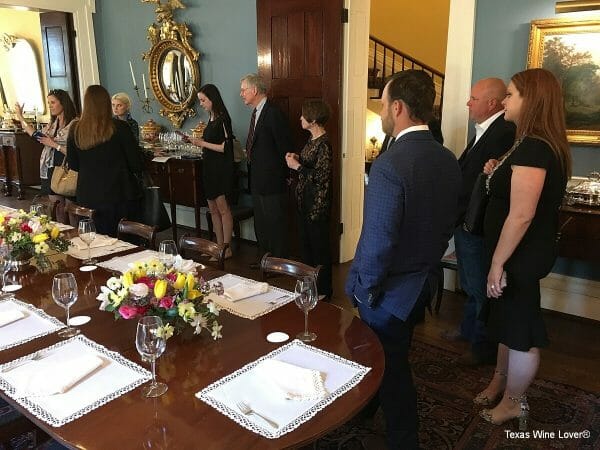 Once on site, the Brennan team and members of the Governor’s Staff who would guide and direct the pairing event gathered in the dining room for instructions. About 32-34 guests were expected for the evening, plus the additional seven folks on the Brennan team. Everyone was to be divided into three groups that included one of the Governor’s staff members as a guide, two or three of the Brennan team, and 10-12 guests. Each group would start in a different location and rotate every 30 minutes to the next location. The same wine and food were served in all three locations at the same time. Everyone stood at high-top tables on the patio and in the drawing room. First Lady Cecilia Abbott remained on the patio greeting each group in turn. The group in the dining room was seated at the large table with Governor Abbott who remained in this location throughout the evening. The three staff members that helped guide the groups were Meg Gazzini, Sarah Whitley, and Sydney Wallace. These young ladies were so gracious and helpful. Pat and Trellise Brennan accompanied one group, Rebecca and Travis Conley with Jason Hisaw a second group, while Todd Webster and Carl Hudson accompanied the third group.

Following this organizational meeting, most of us went to the back patio to visit and relax until guests arrived. While on the patio, the Governor’s young golden retriever, Peaches (the First Puppy of Texas), came out to greet everyone, complete with a yellow tennis ball in her mouth. As she was obviously looking for someone to take pity on her and play ball, I volunteered and threw the ball for Peaches 5-6 times. The game with Peaches had to stop when the first guests joined us on the patio where Todd Webster and I would begin the evening. 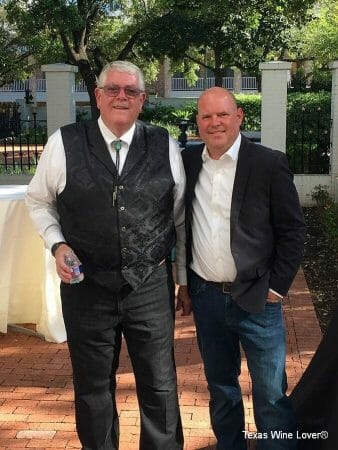 As guests arrived at the front steps of the Mansion, each received a glass of Brennan Vineyards Dry Rosé 2017. This all-Texas wine was based on the Mourvèdre grape grown in Brennan’s Newburg Vineyard south of Comanche, TX. The grapes were pressed, the juice fermented at cool temperature and aged a short time in stainless steel tank before bottling. This classic dry rosé offers aromas of near-ripe strawberry fruit, flavors of cranberry-lemon compote, and a bright, crisp mouthfeel with an impressive finish. 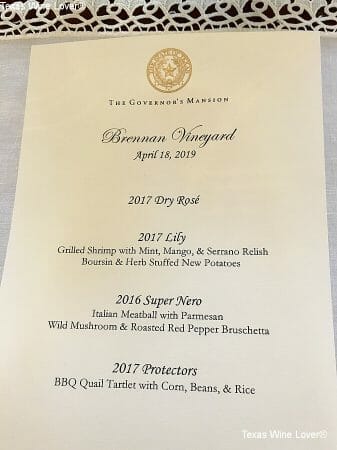 Food and Wine Pairing Menu for the Governor’s Event

Most of the guests were friends of the Abbotts and contributors to the Governor’s campaign fund. The Governor’s Chief of Staff, Luis Saenz, former appointments director in the governor’s office, attended and moved about greeting and visiting with guests, staff, and Brennan team members. Two other elected officials were also in attendance, State Senator Kelly Hancock (District 9 – portions of Tarrant and Dallas Counties) and State Representative Craig Goldman (District 97 – southwest Tarrant County). 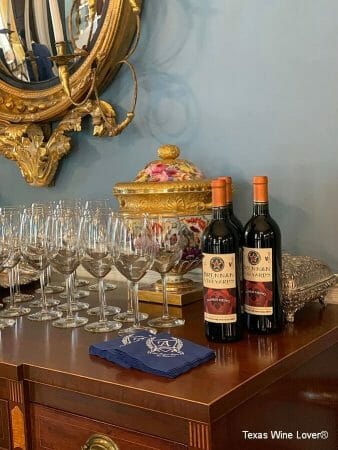 The second pairing was an Italian meatball with Parmesan accompanied by wild mushroom and roasted red pepper bruschetta served with Brennan Vineyards Super Nero 2016 Texas. The grapes comprising this lovely red wine were 90% Nero d’Avola (Newburg Vineyard, Comanche County, TX) and 10% Cinsault (Newsom Vineyards, near Plains, TX, Yoakum County). The wine was fermented in stainless steel tank before aging about 18 months in a mix of American and French oak barrels, both new and used. The Super Nero is a rich, dark wine with intense flavors framed by creamy vanilla notes from oak barrel aging. It is dry and finishes with bold, yet ripe tannins. 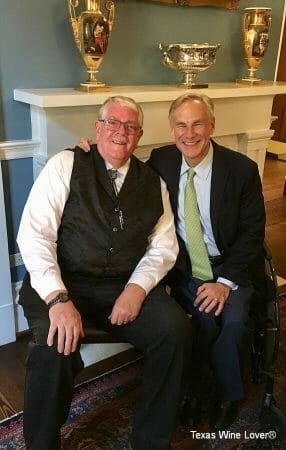 Protectors is noteworthy as this is the inaugural release in ‘The Grape Frontier Collection’ designed as a tribute to James Madison McCrary whose 1876 historic homestead is now home to Brennan Vineyards. McCrary was a true frontiersmen, avid horticulturist, and businessman; having opened Comanche’s first general store and cotton gin. McCrary served to protect the people of Comanche County as a Ranger of the Company D Minute Men from May 1872 to June 1873. He later served as a Ranger of the Frontier Battalion. In addition, Protectors represents a focus by Brennan Vineyards on the grape Alicante Bouschet which is one of only a few grape varieties in which the juice is darkly colored. Most red grapes have essentially colorless juice and must derive color from contact with the skins. The deep color achievable with Alicante Bouschet opens new options for Texas winemakers. 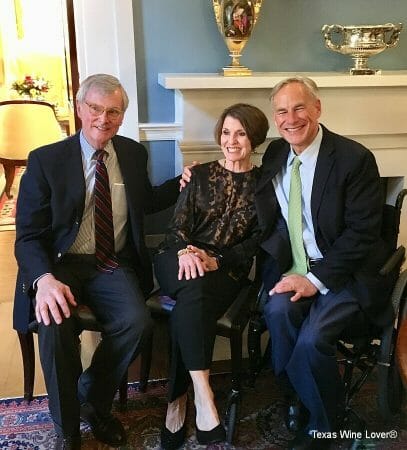 As guests began to depart the Mansion, the Brennan Team took advantage of the opportunity to visit more with Governor Abbott. The Abbotts seemed pleased with the evening and expressed appreciation for the newly acquired knowledge about Texas wines in general, and Brennan wines in particular. It was at this point that a lot of photo opportunities were presented. 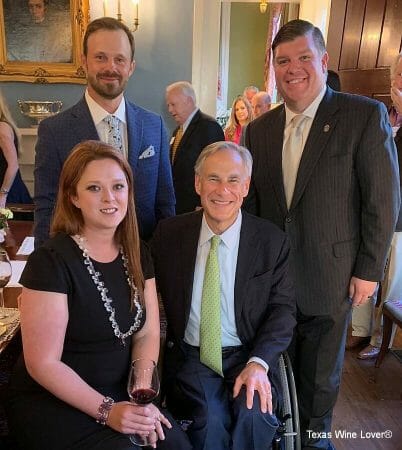 The Brennan Vineyards team was certainly pleased with the results of the evening. It was a thrill to have the opportunity to share Texas wines with the Texas Governor in the Mansion. The bonus was that most everyone seemed impressed with the quality of the wines, and appreciative of some new knowledge relating to the fast-growing and maturing Texas Wine Industry. We were laughing and talking excitedly about the event as we exited the Mansion on the way to a pleasant dinner in downtown Austin. We did stop on the steps for one more photo opportunity, and as you can see, we were all smiles at this point. 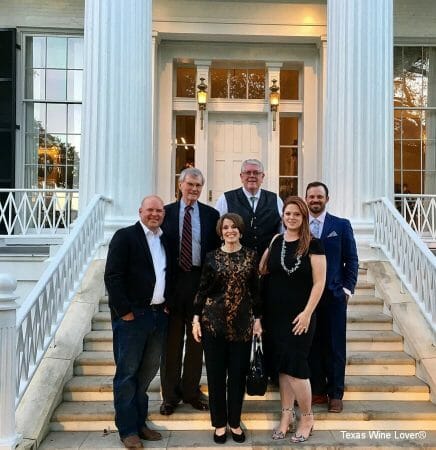 To close, it seems only right to offer special thanks to Governor Greg Abbott, First Lady Cecilia Abbott, and the entire staff at the Governor’s Mansion for organizing, preparing, serving, and hosting this most special Texas wine event.