Brennan Vineyards is located in Comanche and Pat and Trellise Brennan are the majority owners. In 2002 a five acre vineyard was planted and the winery opened in 2005. Today they have three vineyards with a total of 37 acres. They grow about 12 different kinds of grapes and sell some grapes to other Texas wineries. Some of the grapes grown are Cabernet Sauvignon, Syrah, Viognier, and Nero d’Avola.

As we drove to Brennan Vineyards, I received a message on Twitter from Todd Webster (@txviognier), winemaker at Brennan Vineyards. He said if we were coming up a certain road, make a short trip and we could see their biggest vineyard. We did so and it was the biggest vineyard we have seen so far. We learned later from Todd they mechanically harvest their grapes which makes sense with the amount of vineyard acres. 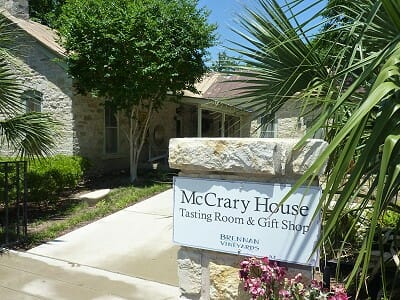 Upon entering Brennan Vineyards, you encounter a campus comprising three buildings. The first building is the historic McCrary House tasting room and gift shop built in 1879. The center building is the winery and the last building is the Austin House Events Center. The events center was built in 2006 and has 3,700 sq. ft. with a patio and outdoor fireplace.

We entered the tasting room and Tina Marken, Hospitality Director, was behind the tasting bar. Since Todd Webster was expecting us, she texted him to let him know we arrived. As we were waiting for Todd, Tina started us on a tasting. 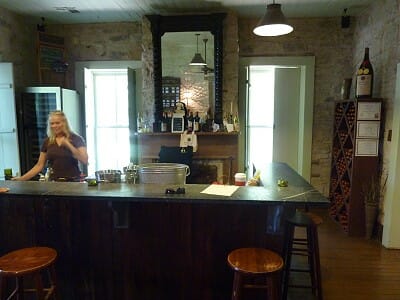 All tastings are complimentary and you can do a tasting while sitting or standing at the bar. Tastings are poured from the bottle. There is sometimes a limit to the number of wines tasted but usually it is whatever they have opened. Crackers and chocolates are provided during the tasting to cleanse your palate and enhance your tasting.

Soon Todd Webster arrived and we got a chance to meet in person. He took over our tasting and was able to provide insight into the wines he had made. As mentioned previously, his Twitter handle is @txviognier which makes sense since Viognier has been Brennan Vineyard’s signature wine since they opened in 2005. 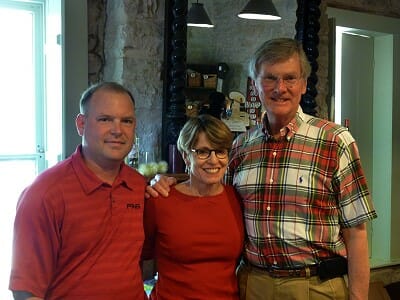 During our tasting Pat and Trellise Brennan arrived in the tasting room so we got a chance to meet them. They, like most people in the wine industry, were very nice. We finished our tasting after Todd introduced us to a couple of his latest wines, Dark Horse made with Nero d’Avola which was bottled in March 2012 and Lily which is a White Rhone style blend with 53% Roussanne, 25% Viognier, and 22% Grenache. Since Grenache is a red grape, after they harvested, it went directly into the press so they got white juice out of it. As with the other wines we tasted, both were very good.

A question came up prior to our visit to Brennan Vineyards and now we had the perfect person in Todd to answer it. We had tried a Cabernet Sauvignon elsewhere but were then told it was mostly Cabernet Sauvignon but had a tiny bit of a few other grapes. We asked what percentage of grapes the single varietal wine has to be in order to call it just that variety on the label and the answer is 75% in Texas. The percentage is different in other states.

Tours are available at Brennan Vineyards so Todd then took us on a tour of the campus. We went first to the winery where we saw the production facility with the stainless steel tanks and the laboratory. We learned that the bladder press is used for two hours with the white wine program but the red wine program only uses about one hour. 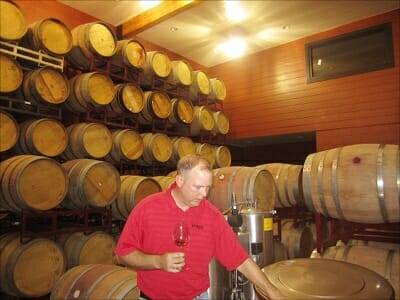 We then went to the barrel room where their Texas wine is aged. We learned due to requests, Brennan Vineyards will be making a Chardonnay soon and will be making it buttery and oaky, but not with too much oak. Speaking of oak, we learned from Todd that a barrel usually loses 50% of its oak the first year, 30% the second year, and 20% the third year. The fourth year will then be neutral with no oak and primarily used for just storage. They can add oak chips though at that point to get the oak flavor again.

One interesting thing we haven’t seen before is Brennan Vineyards stores their barrels at a slight angle so the bung hole (the barrel hole) isn’t directly on top of the barrel. The reason is because they do not top their barrels with the wine. If they top the barrel and leave the barrel upright, they end up losing wine every month because of evaporation and have the chance of oxidizing the whole barrel. Rotating the barrel helps prevent that and they do not open the barrel during the year. 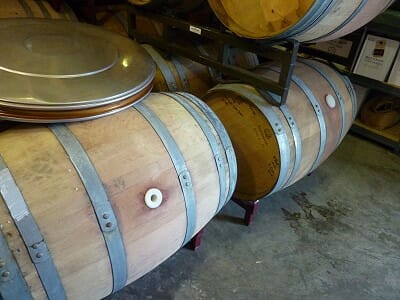 We then went to the events center. The basement of the events cellars is where the many cases of wine are stored. Upstairs in the building is the large room with tables set up for events such as weddings, live music, and other special occasions. Wine dinners are held the second Friday of each month except August. A balcony overlooks one of the vineyards along with Pat and Trellise Brennan’s house nearby.

We concluded our tour and returned to the tasting room. There is a gift shop present with clothing and wine accessories. A wine club is available from the winery.

It was a pleasure to meet Todd, the Brennan’s, and Tina and we had a wonderful time visiting Brennan Vineyards.