Sullivan’s Steakhouse in Houston occasionally has special wine dinners and the most recent happened on July 19th. It was called the Whitehall Lane Winery Wine Dinner and featured four courses with each course paired with Whitehall Lane wines. Special guest Edd Lopez of Whitehall Lane would be present. I was fortunate to be invited to attend the dinner.

Upon arrival at the wine dinner, I soon ran into Russ Kane (VintageTexas blog). While talking, Edd Lopez introduced himself to us and told us a little of his background in the wine industry. Even though he works in California, he actually has been working with customers in Texas for 20 years. Lately he has been pleased to see a big increase in the interest of wine in Texas even during the hot summer months. Edd Lopez used to work with Seghesio Winery and last year he joined Whitehall Lane Winery which is located in Sonoma, California working for the Leonardini family as their National Sales Director. More people were arriving for dinner so Edd went to visit other patrons. 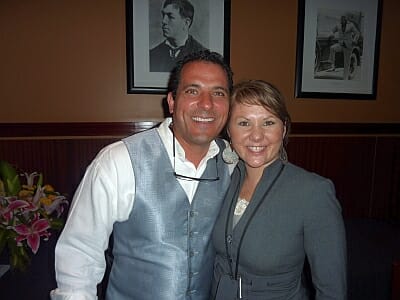 A 2010 Whitehall Lane Sauvignon Blanc was poured for everybody while two appetizers were passed around which were Shrimp on Grits Cake and Togarashi Tuna on Cucumber. We enjoyed both along with the fresh white wine which had hints of ripe peaches and apricots. During this time writer Ron Saikowski arrived and joined us in the enjoyment of the Sauvignon Blanc. 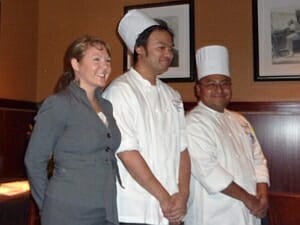 It was time for the start of dinner and everybody found their seats. We were introduced to Sullivan’s Wine Sommelier Kristie M. Farmer along with Executive Chef Teli Trikilis and Sous Chef Horacio Degante. They then left to prepare our meal while the first course started.

The first course was a Crab and Avocado Tower with layers of crab, avocado, and pico de gallo served with mango and strawberry coulis. The Whitehall Lane wine served was their 2010 Chardonnay. The Chardonnay did not have much oak and had a nice acidity. The crab pairing was going beautifully until I hit a spicy piece of pico de gallo, but the Chardonnay helped cool it down. 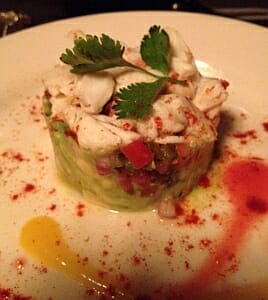 Edd Lopez talked to the dinner patrons between each course and was very informative about Whitehall Lane Winery and even entertaining during his talks. One comment he made about drinking wine struck me when he said, “You should jiggle, wiggle, and giggle with your wine. Enjoy it!” I never thought of it like that before but absolutely!

The second course arrived which was a fried green tomato caprese with fresh mozzarella, basil, and a blood orange vinaigrette. This course was paired with the 2008 Whitehall Lane Merlot. It was another winner with the pairing and I found the Merlot to be thin and very delicious.

Seated at our table were two couples who were a lot of fun and happened to be wine club members of Whitehall Lane Winery. We had a nice conversation with them during dinner.

The entrée came which was a center cut filet mignon with caramelized brussels sprouts, wild mushroom polenta, drizzled in pink peppercorn bordelaise. For the meat, the 2008 Whitehall Lane Cabernet was served.

We learned from Edd the Cabernet could last through 2017. He also told us just because it is a Cabernet does not mean it is going to age well.

Dessert arrived and was a delicious chocolate symphony of white and dark chocolate mousse finished with a passion fruit sabayon. The wine served was the 2011 Whitehall Lane Belmuscato which was an Orange Muscat. This California Orange Muscat was much better than the one we tasted in our Battle of the Texas wine Orange Muscats. I might have to find a bottle of that wine to compare against our Texas winner. 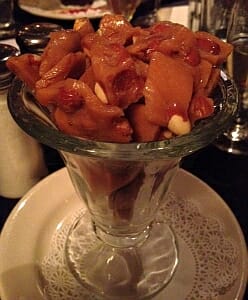 The evening was over but the memories of the delicious food from Sullivan’s Steakhouse and wine from Whitehall Lane Winery will remain in my mind.