The harvest celebration began at Messina Hof on July 20th and continues until August 19th. I attended the first day of harvest and since it happens during the evening hours, it is called the Moonlit Harvest.

Since we are VIP members at Messina Hof, we have visited many times and taken many tours, so I was looking for something unique to write about. I found it as soon as we met Paul Bonarrigo in the tasting room. But first allow me to give you a brief summary of the evening because you really should participate in one of the weekends of harvesting at Messina Hof. 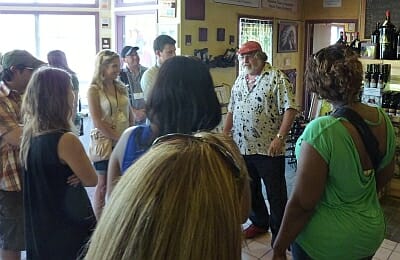 After registering and picking up our harvesting blades, a presentation by Paul and Merrill Bonarrigo was given. In his usual entertaining manner, Paul explained a little about Texas wine areas, harvesting, and making wine. We were then told the proper way to harvest grapes and sent off to the vineyard to participate. While harvesting, you were supposed to look for the kahuna, a grape cluster which you thought was interesting looking and could describe a story about it. After harvesting, the top ten kahunas were presented and the winner chosen while the losers were the first to stomp grapes. A Messina Hof harvesting t-shirt was given and the grape stompers placed their now purple footprints on the shirts. After getting cleaned up, it was time for dinner paired with your selection of various Messina Hof wines. 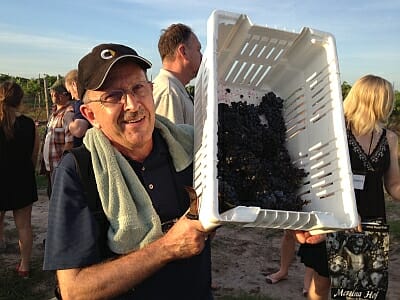 Now for the unique angle I found. As I mentioned, I can’t count how many tours we have taken at Messina Hof, whether it be just visiting, spending the weekend in the bed and breakfast villa, or during the 20 person private tasting which comes with a VIP membership. We usually have a different tour guide every time and interestingly enough we learn something different on every tour. This time however, Paul Bonarrigo himself gave our group the tour, which was the first time for me.

It was interesting to see how Paul gave a tour compared to the regular tour guides as he provided a little different insight. Paul explained how his daughter-in-law Karen Bonarrigo just had her baby, Paul Anthony Bonarrigo, the day before. He becomes the eighth generation Paul Bonarrigo and since his birth happened exactly on the day predicted, he has already earned the nickname of “On Time.” Paul and Merrill told of their other grandchild, Sophia Marie, who the wine Sophia Marie Rose is named after. On the wine label is her hand print and they said when she was a baby, she actually participated in grape stomping with a little help from her father, Paul M. Bonarrigo. So he joked, or maybe not, that they are going to get Paul Anthony to stomp grapes before the end of harvest. 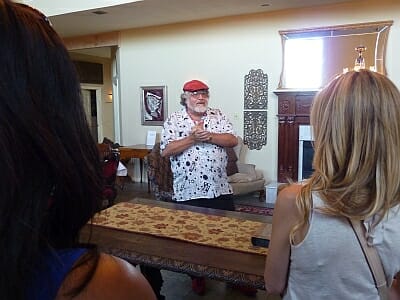 I first heard Paul’s perspective on different things when we were in the bed and breakfast villa. The villa was built in 1999 and recently received a 4 diamond rating which is unusual for a bed and breakfast. The villa is filled with antiques and artifacts and most are described through regular tours including the winemakers table. Paul said it was built in the 1600’s and is passed through the Bonarrigo family which he received when he was 16. He also told us about other items in the villa which I have not heard described during other tours.

Paul introduced Steve Warren who is the General Manager of Messina Hof Hill Country located in Fredericksburg. We then heard the news that they are planning on building a third Messina Hof location in Dallas next year. Messina Hof will then be covered in three major areas in Texas. 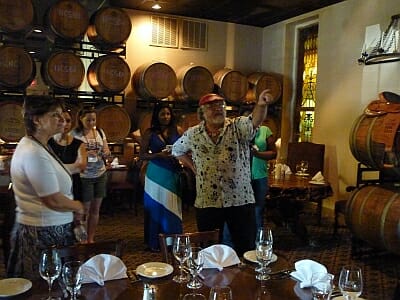 We then went to the Vintage House restaurant and Paul explained how the wine barrels stored there are full of wine. There is also another location on property where more wine barrels are stored making a total of 800 barrels. We heard on a previous tour that the 800 barrels makes them the Texas winery with the most wine barrels so I asked Paul, and his reply was he has not seen another winery in Texas with more barrels.

Paul then explained about the barrels themselves and how they use both French and American Oak barrels. He said he is often asked what the difference between French and American barrels is and he replies, “About $900.” He then seriously told us how the oak species are different and produce a different flavored wine. 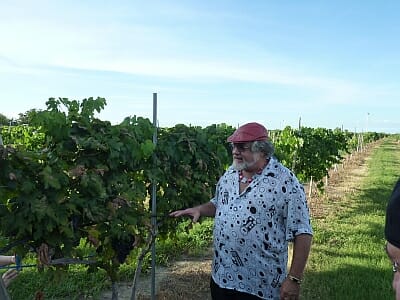 On to the vineyard, Paul explained the Lenoir (Black Spanish) grapes they grow there are at 21 Brix (sugar content) right now which is perfect for their Rose. He squeezed a grape for us and showed it was a rose color. In a week the color will be maroon and will just get darker as time goes on. During this time the grapes will be used for their Port style wine. Basically he said you control the style of the wine by when you harvest the grapes.

The tour was over and it was time for the Moonlit Harvest to begin. Once again, I had taken another tour at Messina Hof and learned more things. Everyone I talked to in our group later enjoyed themselves too, so if you get a chance head to Bryan and enjoy the family experience at Messina Hof.