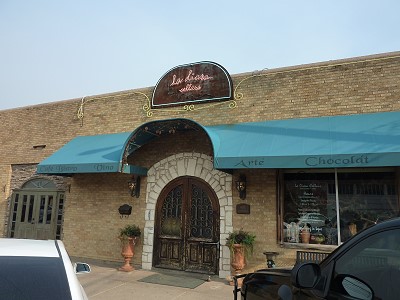 Located across the street from McPherson Cellars, La Diosa Cellars makes for a nice evening of food, wine, and music. We arrived at La Diosa Cellars on a Saturday night at 7pm and the winery was nearly full. We were seated at a table and perused the menu.

La Diosa Cellars (Spanish for “the Goddess”) has Spanish inspired cuisines and wines. The signature wine for La Diosa Cellars appropriately is their Sangria. We have seen the wine at specialty wine stores throughout the state, although we never got a chance to try it until we visited La Diosa. I read from different places the grapes used to make the Sangria, but when I asked the waitress, I was told whatever Kim McPherson has around that year to blend. 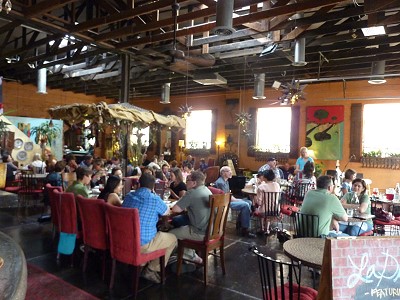 They do not have tastings like other wineries but since we wanted to try their wines, we chose two flights of La Diosa wine which include three wines in a flight. Besides the Sangria, La Diosa has wines called Bella Blanca, Bella Rosa, and Bella Rioja in addition to other wines such as Viognier, Sangiovese, and Cabernet Sauvignon. After asking what grapes are used in the Bella wines, the answer was the same: whatever Kim has left over for making them. La Diosa Cellars produces around 2,000 cases of wine a year. Four McPherson Cellars wines are offered in addition to many other domestic and international wines

Since it was also time for dinner we ordered our favorite, Margherita pizza. They offer a bistro menu, coffee bar, and gourmet desserts. The winery serves lunch and dinner. 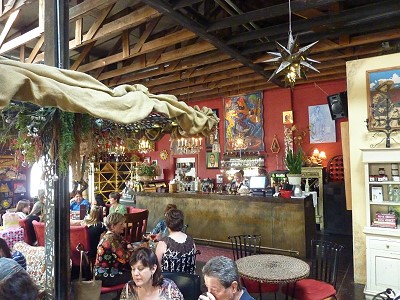 While waiting for our wine and meal, we glanced around. Sylvia McPherson is an interior designer and it is evident with the décor at La Diosa Cellars. Besides a large collection of permanent art on display, the winery supports local artists by featuring art on a revolving basis. A gift shop has books, salsas, wine accessories, and other items. The entire winery can be rented or just a back room. Events take place such as rehearsal dinners, showers, and receptions.