“Let’s get ready to rumble!” We recently returned from a trip to visit family in Illinois and being wine lovers, we wanted to see if Illinois had any wineries and if so, visit some. We had previously been in Buffalo, New York, in February to also visit family and had the opportunity to visit some wineries near there. We thought it might be interesting to tell of our experiences, in addition to compare wineries in New York and Illinois with the Texas wineries we are used to visiting.

As most wine drinkers are aware, New York State is one of the leaders in wine production in the United States behind California. Jeff grew up in New York State but there were not any wineries near where he lived, at least at that time. If you look at a map of the wineries in New York, you can see they are spread throughout the state divided up into regions.

We were in Buffalo in February and as most people may know, it is not a great time to be in Buffalo because of the harsh winters. We ended up having an entire Saturday to do something, and even though Niagara Falls is nearby, it is still not a great time to visit. So what should we do besides go to the local mall? Visit wineries of course!

We looked at the Uncork New York website (http://www.newyorkwines.org) and through some effort, discovered there were two wine trails near Buffalo we could choose. There’s the first comparison. The New York website is beautiful and informative, but the GO TEXAN website (http://gotexanwine.org) is much easier to find what you want. Since we were staying on the south side of Buffalo, we decided to visit the Chautauqua-Lake Erie Wine Trail (http://www.lakeeriewinecountry.org). Since there are over 20 wineries on the wine trail, we knew we were not going to be able to visit them all so we concentrated on the wineries closest to Buffalo. 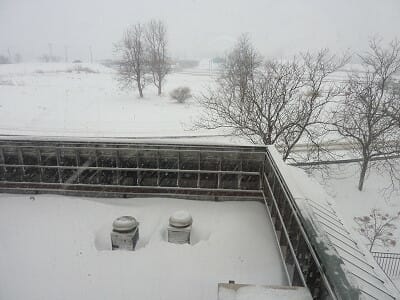 We awoke Saturday and upon looking out the hotel window we were surprised to see a lot of snow falling. We thought our plans for the day were gone. Fortunately by around 9:00am, the snow subsided and we could see snow plows already on the roads. We called a few wineries who looked like they might be a little off the trodden path to get confirmation they were open, and especially if the roads to their location were plowed. Even though Jeff drove for six years in the worst winters while going to school and never had a problem, the rental car probably did not have studded snow tires so we didn’t want to take a chance. The wineries had positive replies so we decided to start our little road trip.

While driving to the wineries we were amazed at all the fields. They were full of vineyards! Usually you would see an empty field but all these fields had grapes, even small fields next to houses. It was obvious if you lived in that area where grapes grow well, you grow grapes whether you plan on using them yourself or to sell to wineries.

We decided to drive to our chosen furthest winery first and work our way back to the hotel. When we arrived at the winery, it looked like most wineries in Texas, a small but nice building. We have been to Napa Valley separately years ago and visited some of the big name wineries with large complexes, but we have visited many more Texas wineries which are smaller in size. The rest of the wineries we visited that day were very similar in size.

The tasting rooms again looked similar to Texas tasting rooms. We don’t know why we were thinking they would be different other than we were in the number two wine producing state. The other thing which was similar is all the people working there were usually the owners and everybody was nice. It must be true that wine drinkers are the nicest people! In fact one winery which usually charges a tasting fee said, since we came out on a day like that, the tasting was free.

We did make it safely through the snowy roads and back to the hotel. We look forward to visiting Buffalo again and trying the northern wine trail next time. When we really have some vacation time, a trip to the Finger Lakes region is definitely needed.

More recently, we visited Illinois for a family trip. What do we do? Look to see if there are any wineries in the vicinity! Fortunately Illinois does have wineries. There are over 90 wineries which is a lot less than the approximate 215 wineries in Texas. We noticed there were five wineries within an hour’s drive of where we were going to be. One day when we were sightseeing, we were able to visit two of them. Unfortunately, the other wineries were closed on Mondays which is when we were available to visit them. Didn’t they know we were in town?

The first winery we visited was located in a small town and was a small winery. A couple was already there finishing up their tasting and the woman behind the counter helped us. We tried to find out what kinds of grapes were grown in Illinois and she said there was only Chambourcin and in her opinion, it is pretty bad, so they do not use it. She described it similar to the wild grapes that grow in Texas. The grapes they use come from California and Washington. Again, the winery was very similar to Texas wineries and this particular one charged a small tasting fee. Overall, we weren’t very impressed, especially since it appeared that Illinois only grew one grape and this winery didn’t even use it.

Our next visit was to what was a branch of a main winery and the brochure said it was just a tasting room. Our hopes were not very high, but we went and eventually found the location. While driving up to the winery we noticed tents outside and it appeared they were setting up for an event. It was confirmed later that a wedding was going to happen. From the outside, the winery looked very nice and the tasting room was just as nice. 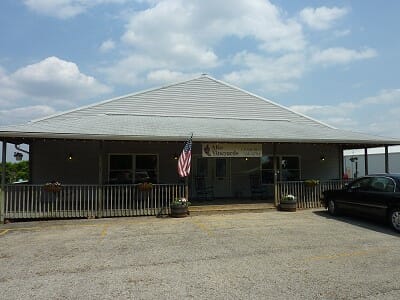 We strode up to the tasting bar and got introduced to the tasting process. They had over 20 wines to select from but the pourer suggested selecting only 5-6 wines as he said the wines eventually all start tasting the same. We selected some wines to start with and asked the same question about what grapes they use. We were surprised when we were told they use all Illinois grapes grown from their own vineyard started in 1981 or from across the state, and there were over five grapes they used. Obviously the first winery’s pourer needed some education. In fact according to the Illinois Wineries website (http://www.illinoiswine.org) states there are at least six grape varieties grown in Illinois. They include five grapes which they call “French Hybrids”, developed by crossing French grapes such as the Chardonnay, with native American grapes. They are Chambourcin, Seyval, Vignoles, Chardonel, and Vidal Blanc. The other top grape grown is Norton. 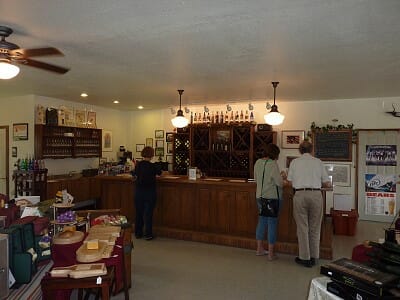 We decided to be daring and try the wines made with the Chambourcin grape which the other winery said was terrible. Guess what? They weren’t. We were very pleased with the winery selection and really didn’t have a horrible tasting wine. The best surprise was at the end when we found out the tasting was free. Besides weddings, the winery does have music events too.

In summary, there really aren’t a lot of differences between the wineries in New York, Illinois, and Texas. There are large and small wineries, music events and weddings held at the wineries, and friendly people who are passionate about their wines. The wineries for the most part have learned or are learning to make the best wine with the grapes that grow best in their area. We also learned the best thing is it is just as much fun visiting a winery no matter where it is located!