Red 55 Winery is part of the Miranda Lambert Store located in Lindale. If you do not know who Miranda Lambert is, she is a popular country singer and was born in Tyler, Texas. The store gets top billing at the location, so most likely most people stop by to see memorabilia from Miranda Lambert and purchase any gifts.

The winery opened in 2006 and is owned by Miranda Lambert’s parents, Rick and Beverly Lambert. 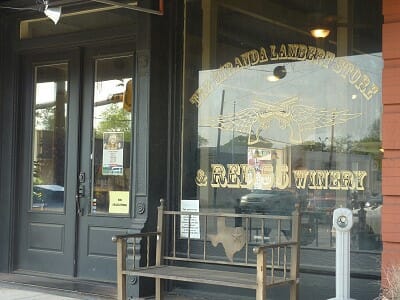 When we walked into the store/winery, nobody was present except a girl sitting in an office overlooking the room. She asked if she could help us and we learned later her name was April. When we said we were interested in a tasting, she looked a little bothered but came out to the tasting bar to help us.

We were told the first wine chosen to taste is free but there would be a charge for three more after that, and most of all there was no sharing. That came as a shock since we have never heard that one before. With April not being very pleasant, Gloria was immediately turned off, said she now was not interested in tasting, and went to walk around the store. 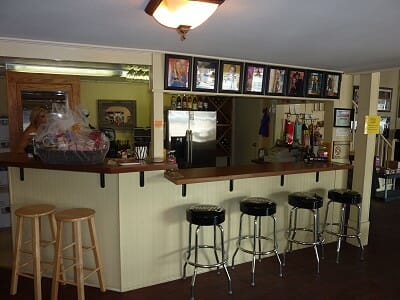 I decided to do the tasting, but felt like I had to hurry during it and really felt uncomfortable. I sat at the bar during the tasting while April poured from the un-corked bottles.

She answered my questions and told me their grapes came from a small vineyard with the rest of the grapes being from around the state. By looking on the Piney Woods Wine Trail site, I learned the small vineyard is LouViney Vineyards located in Sulphur Springs. The wines are named after Miranda Lambert’s songs and April could not tell me what type of grapes are used in the wine. She made the comment that 65% of the grapes had to be from Texas though. Hmmm, I keep getting told different percentage numbers. According to the GO TEXAN website, it is 75% right now.

April said that Miranda Lambert now lives in Oklahoma but does visit the area sometimes.

While tasting, Gloria asked if she could go upstairs and April said sure. I asked her what was upstairs and she said basically a rummage sale. After I quickly finished my tasting, I went upstairs to see what was there. There are some gift items present, but there is also used clothing that Miranda Lambert and her fiancé Blake Shelton has worn which you can purchase. Blake Shelton is also a country music star and one of the judges on the current television show “The Voice.” I decided not to buy Blake’s old jeans.

The store does have music events as there is a small stage, and of course a gift shop for Miranda Lambert items.

We are guessing April gets a lot of lookers at Miranda’s items, but it is a store and supposedly a winery, so her attitude was not expected. If Miranda’s parents want to have a serious winery, they need to do something about the location and give the winery more of a focus.

The Red 55 Winery is on the Piney Woods Wine Trail.

We volunteered to pour wine at Old Town Spring’s 2012 SpringFest. When we arrived, we discovered we were assigned to help Red 55 Winery. Like the other wineries, they brought three wines: Crazy Ex Girlfriend, Kerosene, and Red 55. Since visiting Red 55 Winery, we had visited Crump Valley Vineyards and learned they were now making the wine for Red 55 Winery and were going to tweak a few of the wine formulas. The three wines brought to the festival were definitely much better than I remembered tasting at the winery. The winery representatives were also very nice and through another winery’s representative, I heard the owners, Rick and Beverly Lambert, were also extremely nice. Unfortunately I believe we just had a bad visit to the winery. The wines are getting better, the primary people involved in the winery are nice, and we look forward to visiting Red 55 Winery again the next time we are in Lindale.