I took a very quick trip to New York City to watch the NFL season opener between the New York Giants and Dallas Cowboys. I may live in Texas but I was raised in upstate New York so I have always been a die-hard Giants fan. The purpose of this quick post is not about the game (okay, the Giants lost), but some observations I saw during my brief stay.

Since it was just an overnight trip, the packing should have been easy, but the weather forecast had scattered thunderstorms during the day and 30% chance of thunderstorms during the game at night. Not wanting to sit over three hours in the pouring rain, I then had to determine what rain gear to pack just in case. I made this trip one time last year so I didn’t expect too many other surprises this time.

I have experienced this change before during recent flights, but who decided to change the boarding of planes from boarding by seat number starting in the rear of the plane to using zones? I usually fly Continental, oops United Airlines, and was surprised when I first encountered the zones. This time I flew US Airways (it was a package deal with the hotel) and they too use zones. Boarding starting from the rear of the plane always made sense to me because as you board you didn’t have to trip over people or wait for people to finish storing their over-sized luggage in order to get to your seat. But now with zones, it’s almost a given you’re going to be doing that in order to reach your seat.

My first layover stop was in Philadelphia where I viewed a Vino Volo wine bar and had to check out their wine list. They served flights of three wines and one flight caught my interest because it included wines from unique places. I have never heard of one country before and I wish I had written it down now, but I had not intended on writing a blog post. I was considering trying the wine since I had a two hour layover, but there was nobody around and it was 10:00am. That early time never stopped me before while visiting Texas wineries so I’ll have to blame it on nobody being around as to why I didn’t imbibe.

I arrived at LaGuardia Airport on the second leg of my trip from Houston (I did say it was US Airways, right?) and knew I had to get to the taxis in order to reach my hotel which was located across from the famous Madison Square Garden. I’m admittedly a country boy so I haven’t had much experience with taxi lines and such in the big city. Last year when I made this trip and flew Continental, I found the taxi line easily with its backed up taxis waiting for people and before long I was off through the infamous New York City traffic. I found the taxi line this time and there was a line. I don’t mean a line of taxis waiting, but a line of people waiting for a taxi to show up. One finally arrived for me after waiting in line for 25 minutes. Is there now a shortage of taxis in New York City or is it because I flew a different airline? 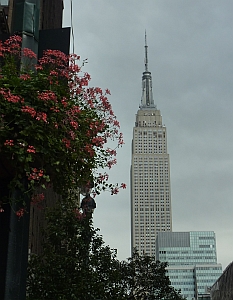 Anyway, I checked into my hotel, the New Yorker Hotel, and soon met my friend who had invited me to attend the game. Since it has been years (I was a teenager so it was a few years ago) we decided to go to the top of the Empire State Building. Fortunately, the weather had cleared and it was a beautiful day at the top of the building. I was afraid with the forecasted weather we would not be able to see anything but the views were great.

The tickets to the Empire State Building came with a coupon for a cocktail in a bar at ground level so we decided to take advantage of it. I looked through the cocktail list but my eyes quickly shifted to the wine list. I was surprised there were no wines from New York State. Here I was in the fourth largest producing wine state and they did not have New York wines. This also was true when we went next to eat dinner and there were no New York wines on that list either. I now feel better that the problem we experience at a lot of Texas restaurants with no Texas wine is not uncommon even in other states. In case you were wondering, I did partake in a German Riesling which was served way too cold. I never thought I would say that. My hands cupping the glass eventually brought the wine up to an acceptable serving temperature. 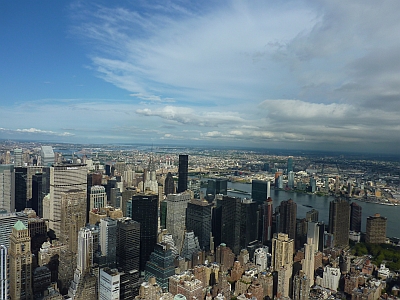 I have “Trains” in the title of this post and they came in next. The easiest way to get to Giants Stadium (it will always be that in my mind even though the new stadium is called MetLife Stadium) is to take a train. We boarded from Penn Station underneath Madison Square Garden and eventually made it to the game. It took a little longer than usual because of the bigger crowd attending the night game.

My flight was fairly early but I made it and eventually got to my layover stop this time in Charlotte, NC. This layover was less than an hour and I had to change terminals, so I moved pretty quickly. I walked by a California Pizza Kitchen which reminded me that the location in Houston near where I live had closed years ago. I was a little hungry, but I needed to get to my gate so I passed it by and then a thought arose from my mind. When I lived on the east coast, I used to always enjoy going to the fast food restaurant Bojangles’. The last one I remember stopping at was probably ten years ago in the Charlotte area when I used to attend NASCAR races. I decided if I came across one while walking to my gate, I would definitely stop. Not far ahead after thinking that thought was my mecca: Bojangles’. 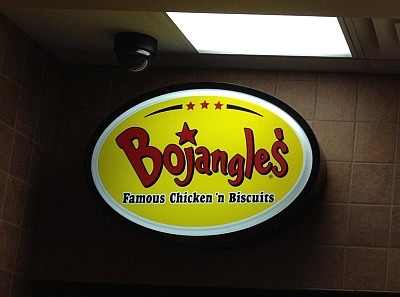 I ordered my usual: Cajun Chicken Biscuit with seasoned fries. The Chicken Biscuit was just as I remembered although the seasoned fries could have used a little more seasoning. It was definitely a highlight of my trip. The plane soon left and I was on my way back to Houston and some Texas wine waiting for me at home.