Gary Farrell Winery is a well-respected Russian River Valley producer focusing on Pinot Noir and Chardonnay. We also received a small amount of Sauvignon Blanc and Zinfandel which just kept things interesting for tasters who want something other than the standby grapes in Sonoma. Since I manned the sorting table, I saw multiple lots of grapes. Lots of lots of grapes! They may be the same variety but a different clone or selection, or from different vineyards. 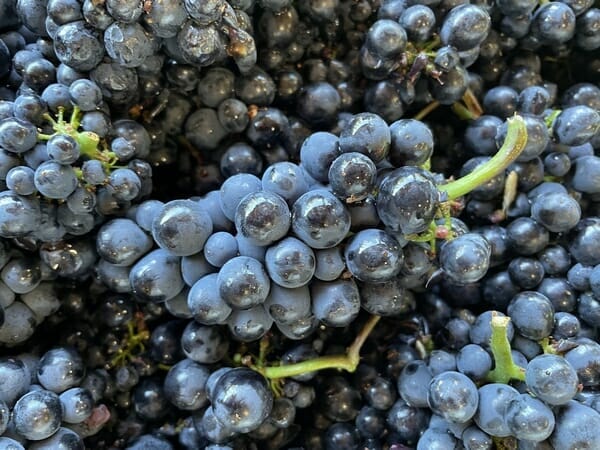 Did you ever think wine would include artistry, chemistry, math, AND biology? If only Mrs. Cann in high school had related our Honors Biology class to wine, I would have paid more attention! A quick recap of plant biology:

Vitis refers to the genus of 79 species of vining plants. Vinifera is the species of grapes used for winemaking. And within the Vinifera species is the variety which includes all of the wine grapes that we know by name such as Pinot Noir, Chardonnay, and Zinfandel. To take things a bit further, viticulture refers to the study and cultivation of Vitis plants meaning grapevines. Remember that other fruiting vines and trees have varieties. For example, Granny Smith, McIntosh, and Red Delicious are varieties of apples.

Now, let’s clarify our use of these terms in the wine world. Variety refers to the grape itself, as it grows in the vineyard, such as Pinot Noir, Chardonnay, and Zinfandel. This is because it refers to plant biology. VARIETAL is used to describe a wine made from a single variety of grape. A glass of Chardonnay is a VARIETAL wine made from the Chardonnay variety of grapes. Another simple differentiation is that variety is a noun while VARIETAL is an adjective. I spent many years in the wine world using varietal to refer to both the grape and the wine until my dear friend in wine, Carl, set me straight on this small but significant difference. It’s variety in the vineyard and VARIETAL in the bottle.

So, what does it mean when a winery or grape grower refers to a grape clone? When a cutting is taken from a vine for the purpose of propagating additional vines, the second plant will be genetically identical to the first plant which we call the ‘mother plant’ or ‘source vine.’ This cutting or second plant is called a clone. Creating a clone can take years and is done under strictly controlled systems from the nation where the vine originates. The vine is cut and planted in soil, then monitored to ensure the buds that grow on the cutting show the desired characteristics of the source vine. If the traits exist, buds are taken from the cutting, and more test vines are grown. These are planted in different locations. Only if the attributes of the source vine are retained and stable over several areas will a clone designation be determined, and a registration number assigned. Cuttings of these new vines are distributed to nurseries for propagation and sold to grape growers.

Each clone has attributes that will help the grower or will produce specific qualities in the finished wine. A grower looks for certain traits they want to replicate in their plantings. Maybe it’s resistance to disease, cluster size, earlier ripening, or even a particular flavor profile. A vineyard may be planted entirely in one clone or there could be different clones in different parts of the vineyard to take advantage of varying soil, sun, or airflow within the property. Did you know? There are approximately 1,000 clones of Pinot Noir around the world! Some of the popular are Dijon Clone 113, Dijon Clone 115, Pommard Clone 5, and Dijon Clone 777.

While I manned the sorting table and fruit kept coming in, I saw different clones of Pinot Noir from several vineyards. The clusters look different, and the fresh berries even taste different. As an example, Pommard has been available in California for years and is known for meaty or gamey notes with firm dark fruit. These grapes taste a little less fruity and have a hint of saltiness. There is a surge in planting 777, known for its complexity with dark, rich colors, and flavors. These grapes taste quite fruity and remind me of plums and Dr. Pepper cola. As the purple beauties flowed past me on the sorting table, it was a fun exercise to see the variations.

I’m going to be a bit more technical for a moment longer. One of the incoming Pinot Noir lots was referred to as the Wente clone. But the head winemaker told me Wente isn’t a clone but a selection. Specifically, this means the cuttings of Pinot Noir came from the vineyard named Wente chosen for a particularly desirable trait. New vines were grown from the cuttings. In this process, though, there is no required monitoring and no plantings in various locations. The reputation of the original vineyard follows the new vines, but the process isn’t regulated like a cloning program. A clone is not necessarily superior to a selection, but a clone is likely genetically closer to the source vine than a selection.

I was tasked with discarding underripe clusters, or those clusters with varying ripeness. I also had to pick out leaves and debris such as vine ties or bugs. It’s rather therapeutic work and I enjoyed seeing the variations in the fruit. As one day of sorting rolled into the next, things did start to feel a little monotonous. But it did give me time for audiobooks!

I enjoyed a short audiobook of just under two hours. Of course, this only got me through to lunch, but it was an enjoyable listen. The book is titled A Drinker with a Writing Problem which is a title I just love! The author, John Turi, writes a wine review for ConnotationPress.com and compiled some of his favorite wines into this quick read. He incorporates some history of the region, grape, or producer, and paints quite a vivid picture of his interpretation of each wine. While these are bottles you likely won’t get your hands on these days, it’s still a worthwhile wine read. Get your audio, paperback, or eBook here.

Check back with me soon for details on the history and characteristics of the Pinot Noir grape and thoughts on the various support businesses for vineyards and wineries.