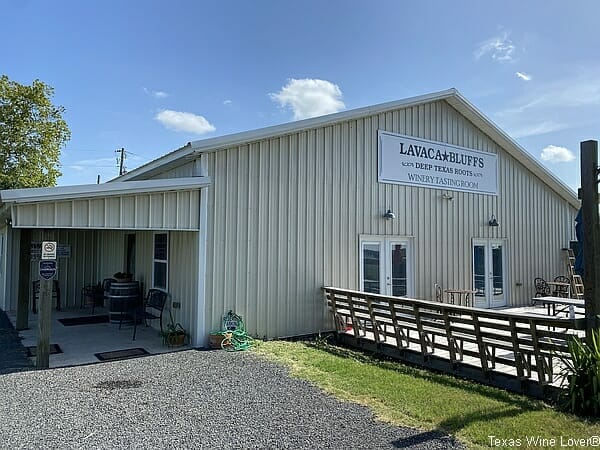 I always love doing a Revisited blog post from before so we can see how a winery has changed since I last visited. This time the post is revisiting Lavaca Bluffs Vineyard & Winery located in Lolita. We were taking a family trip to Corpus Christi from Houston, and we intended to visit wineries along the way. Lavaca Bluffs was one of them.

Looking back, I first visited Lavaca Bluffs Vineyard & Winery in February 2013. Contributing writer Jim Rector visited the winery in March 2016 and the post was called Revisited. Since it was my turn to revisit the winery, it only made sense to title it Revisited (Again).

I had a different GPS this time and we traveled down the road on the way to the winery. As we were getting close according to the GPS, we passed a road that I thought looked familiar. There was no sign of the winery and the road was not what the GPS said so I continued down the road. After a little further, I knew that was not the way because there was not much further to go because the road was going to dead end at a river. I turned around and went down the road that looked familiar. Sure enough, soon we encountered the Lavaca Bluffs arch so my memory wasn’t that bad after nine years. It turns out that Jim Rector’s comment from his post “You’ll want to get the directions from their website as GPS devices still have issues with finding it” was still correct. (Doug, please put a sign at the end of your road. 😊) 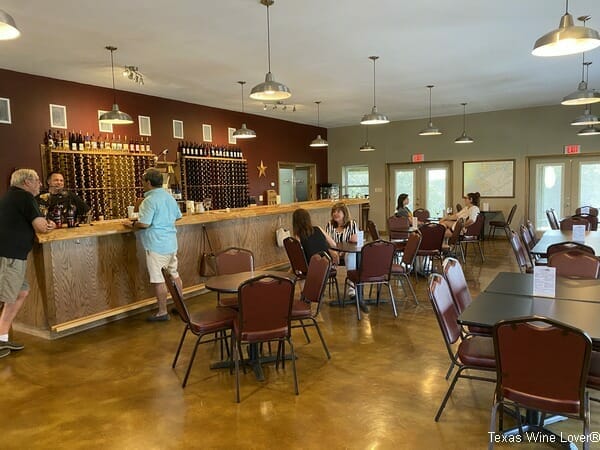 The tasting room was new since I was there last and in there we met Clinton Tegeler who would lead our tasting. As we learned, Clinton is the current winemaker at Lavaca Bluffs and he has been working with owner Doug Reed on the wines for eight years. After making introductions, I glanced in an adjacent room and noticed owner Doug Reed. It had been nine years since my last visit, but we have seen each other a couple of times over the years at conferences. Doug greeted our group and we started a tasting. 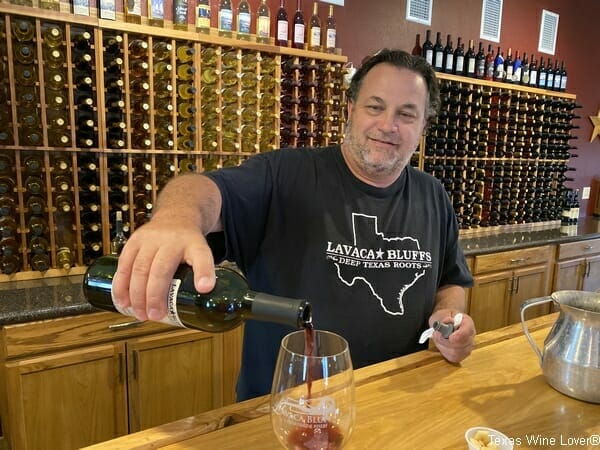 A tasting includes selecting seven wines from a large list of wines. These are just some of the wines that were available at the time of our visit:

This is just a sampling of the wines that Lavaca Bluffs has as they have something for everyone from dry to sweet. Doug was proud of the four Reserve wines as they were made by his daughter, Meredith Reed, at Kerrville Hills Winery using their incubator services. Looking back at Jim Rector’s post from 2016, he had the pleasure of meeting both Doug and Meredith. All the winery’s wines are non-vintage except for the new wines from Meredith.

When I saw the Mustang fortified wine, I commented that I hadn’t tasted many Mustang wines over the years. Doug and I came to the same conclusion that the last time was probably the first time I visited Lavaca Bluffs. He said when they make the wine that they have to wear gloves because the high acid from the grapes can burn you after prolonged exposure. Even though I didn’t select the wine during my tasting, we were poured a sample, and I have to admit that it was very tasty. After all these years, that grape has been mastered by Lavaca Bluffs. 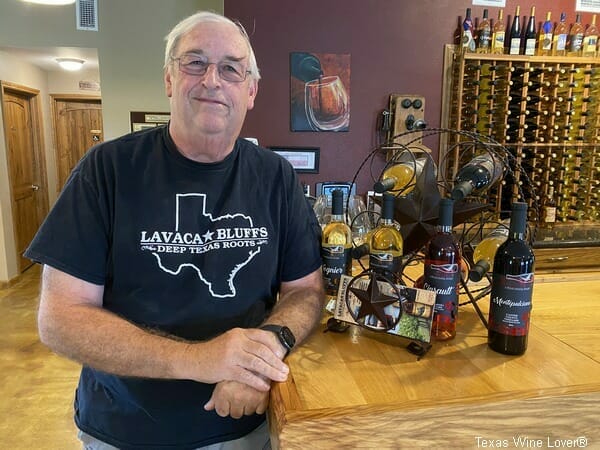 One last note. From my first visit, their tasting bar top had been made from an old bowling alley. During our tasting this time, I was glancing at the current tasting bar and asked Doug about the bowling alley bar. He said it was still in the tasting room, but not the primary tasting bar. He showed me the corner section from the old tasting bar and it was nice seeing an old friend.