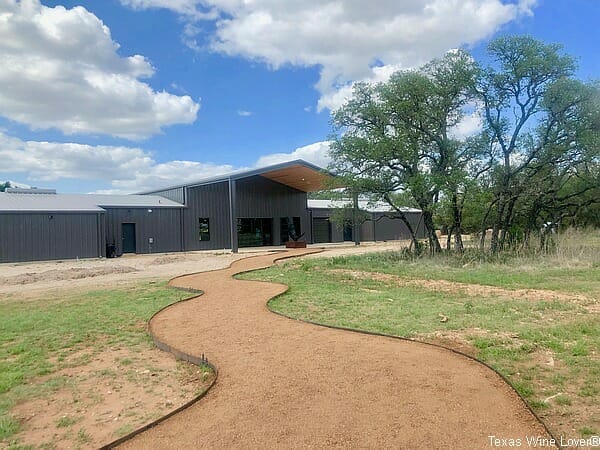 A fateful experience on a 2016 trip to South Africa gave Craig Stevens and Chesney Castleberry a heart for rhino conservation. While observing the animals in the wild, poachers descended upon several rhinos and violently cut off their horns leaving the rhinos to die. The market for rhino horns is driven by status seekers and those who believe the horns have medicinal properties. Most are sold on the black market to Vietnam and China.

Certified oenophiles Craig Stevens and Chesney Castleberry witnessed this tragedy and vowed to do something to help the rhinos. By merging their passion for fine wine and the desire to make a difference in rhino conservation, a unique kind of winery was born. Rhinory marries rhino education and conservation with exceptional wines from South Africa and Texas. Both my recent visit and the winery’s performance at the 2022 TEXSOM Awards showcase how serious Rhinory is about both. 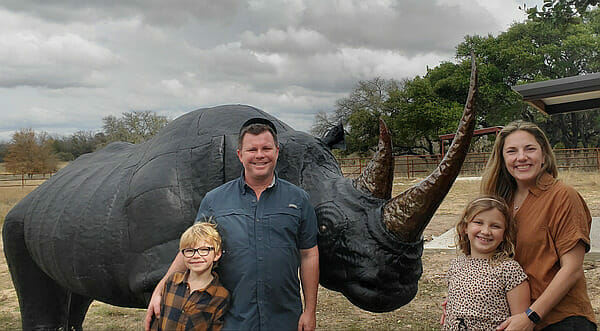 Chesney’s family has a long history in the Hill Country dating back 150 years, and her family still lives nearby. Chesney is a practicing pediatric cardiologist specializing in heart transplants. Craig has a background in finance and real estate. Although the couple moved to the west coast and the middle of the country for jobs and medical training, they ultimately decided on Texas as the place to build their dream.

Rhinory is located on a 55-acre property along US 290 in Fredericksburg. The first three acres of grapevines were planted on the property this year and include Tempranillo, Merlot, and Sangiovese. In time, there will be 10 acres of grapes planted.

Guests first arrived to the modern, airy tasting room starting in May. Visitors may select one of three tasting menus, and each menu includes wine from both Texas and South Africa. The bottles and the tasting menus clearly indicate where the grapes were sourced. There are 20 wines currently offered, but not all may be available at all times.

Tip: take a closer look at the graphic rhino image on the wine label. Do you see the outline of the state of Texas? How about South Africa?

Rhinory hopes to follow in the tradition of many upscale South African wineries that are also incredible spaces for art. A large rhino sculpture greets passersby along 290 and additional rhino sculptures are found at the entrance and on the back lawn. A display of local artists’ paintings graces the walls. Yes, they’re for sale! 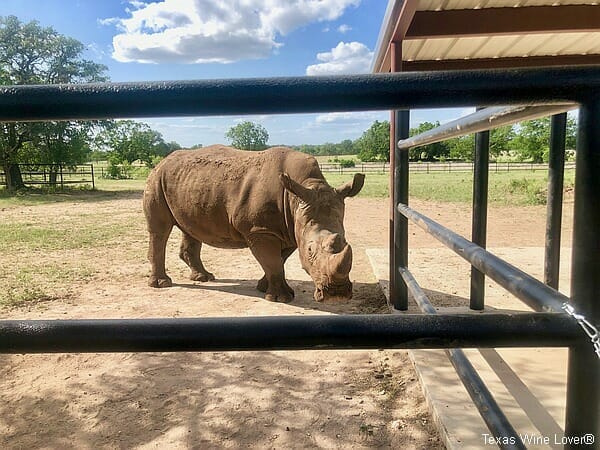 Michael McClendon of Sages Vintage is the winemaker for Rhinory’s Texas wines. Selections include Blanc du Bois, Chenin Blanc, Sangiovese, and a Malbec-dominant blend, “The Horn.” 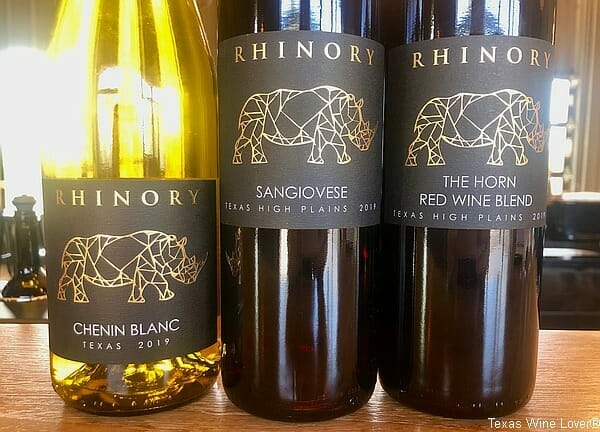 A few of the Texas wine options at Rhinory

“Craig Stevens explained that his winery concept would showcase Texas wine along with wines of South Africa, but not as a novelty or second-tier local offering. He was very clear that quality was at the core of his project. We worked diligently and continue to work on creating wines that are world-class and just happen to be from Texas as an added bonus.

Currently, we are producing varietal white, rosé, varietal red, and red blend wine, including a Montepulciano rosé that is a real gem in a warm summer like this one is shaping up to be. It wasn’t until later that Craig revealed his intent to also have the rhinoceros reserve at the property as well. He has always been clear that the wine needs to be fantastic. It is a pleasure to oblige.”

Rhinory’s wines are made by some of the top winemakers in South Africa. In the winery’s planning stages, Craig created a list of the country’s top winemakers based on wine awards. His top choices, swayed by the opportunity to collaborate on wine and rhino conservation efforts, all agreed to work with the brand-new winery. Among the South African winemakers are cult-favorite Catherine Marshall and Master of Wine Richard Kershaw. Both are well regarded for their cool-climate wines from Elgin Valley, South Africa’s coolest wine-growing region.

These wines were judged by various judging panels over several days, and they consistently earned top marks. No other Texas winery earned more than one Judges’ Selection award in 2022.

Many consider TEXSOM a difficult competition to earn a medal. A 2017 study in the Journal of Wine Economics found that gold medal award rates vary significantly among wine competitions. “They typically range from 15 to 25 percent, but they exceed 40 percent at the Seattle Wine Awards (SWA), and are less than 10 percent at TEXSOM.” For Rhinory to receive Judges’ Selection recognition for multiple entries is a rare feat.

Make no mistake, Rhinory is a bona fide conservation effort with educational and financial goals. The winery touts its partnership with the International Rhino Foundation for conservation efforts. It is also aligned with the White Rhino SSP (Species Survival Plan). This collaborative effort places white rhinos and other animals in zoos and aquariums for breeding and conservation. In this non-traditional case, the White Rhino SSP placed a rhino in a winery. Over time, additional rhinos may be placed at Rhinory to create a bachelor herd, a type of rhino family that reflects how rhinos would live in the wild.

The first resident of the Rhinory is Blake, a 3.5-year-old white rhino that was born at Fossil Rim Wildlife Center in Glen Rose, Texas. He weighs an estimated 4,000 pounds and may grow to around 6,000 pounds by the time he reaches his full size. Blake’s daily diet consists of 100 pounds of coastal hay plus nutritional supplements and treats. Guests will see him in the back pasture, and members and conservation donors have an opportunity for an up-close rhino encounter. 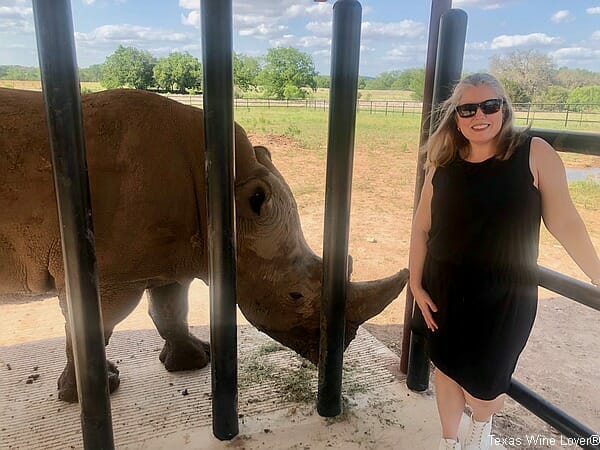 Shelly and Blake get acquainted

White rhinos are also known as square-lipped rhinos because of the shape of their upper lips. They’re not actually white, they’re grey. (The black rhino, another species, is also grey!) The name “white” rhino is believed to be a play on the Dutch word “widje” meaning wide, not white. 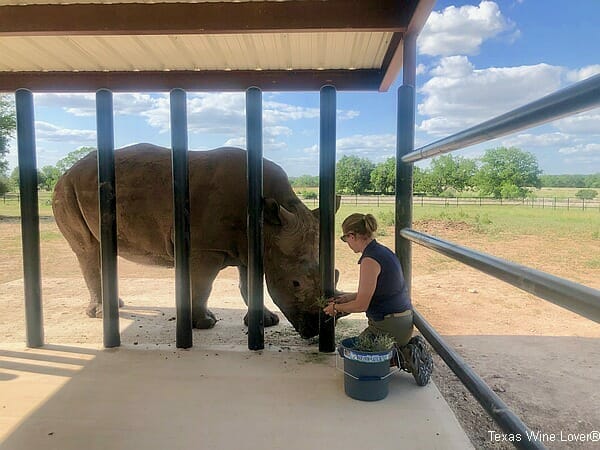 How does a winery care for its resident rhino? By hiring top talent to meet Blake’s every need. Rhinory employs two rhino keepers who are not only responsible for Blake’s care, but also for educating winery visitors about rhinos and conservation efforts. Rhinory’s rhino keepers have decades of zoological experience including 30+ years of experience with rhinos. Fredericksburg even has a veterinarian with rhino experience. Dr. Brittni East is also a valued part of Blake’s care team. 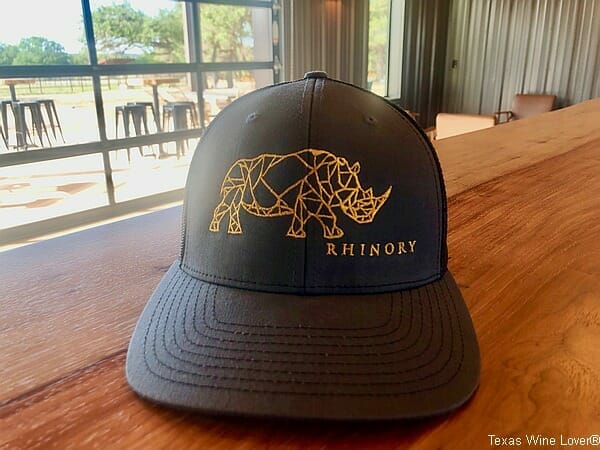 Rhinory has made a multi-year commitment to support International Rhino Foundation (IRF). Not only will the winery make a financial contribution to conservation but proceeds from rhino experiences and merchandise will also support IRF. #TeamRhino

It may be the rhino conservation or the premium wine that draws you to Rhinory. Expect to be impressed by both.