When we first started visiting wineries in the Texas Hill Country and discovered Mason, there was one winery in town—Sandstone Cellars Winery. Today there are seven wineries within walking distance of each other in town and during our visit, we learned there will soon be an eighth winery. People commonly go to Fredericksburg to visit wineries, but Mason is making a strong case to be the next destination mentioned.

Four of us headed to Mason for the weekend and on the way to Mason, we stopped in Art, Texas, to visit 1900 Winery. Don’t blink while driving on Highway 29 because you’ll miss Art, but the winery is definitely worth making a stop. Jim Baker had previously visited a number of the Mason wineries a few weeks before our trip so I will link to his and my previous posts on these wineries which will help you learn all of Mason.

Co-owner Katherine Hassler helped us during the tasting and we learned the history of the winery and 1900 Vineyards. Co-owner Randy Hinckley started a vineyard years ago with Mustang grapes and that provided the means to know this was the calling. Vinifera grapes were planted in 2019 and more vines planted every year since. Right now they have 10 acres of grapes and plan to eventually have 20 acres. 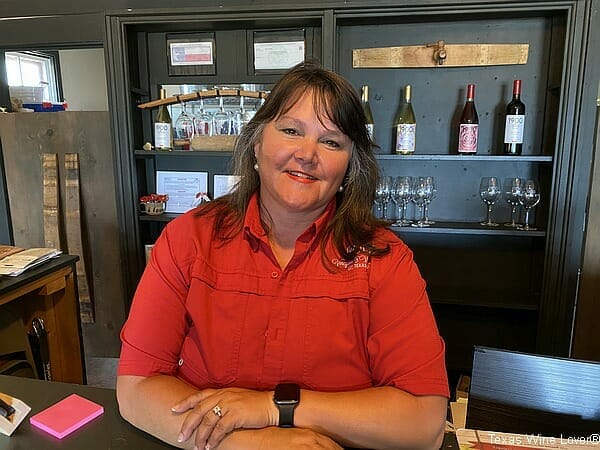 Katherine played drone video footage of the vineyard and the tasting room during our tasting and it was really impressive what they have accomplished so far. Besides the main vineyard, a heart-shaped vineyard growing Alicante Bouschet is located right behind the winery and is used for events such as wineries. In fact, Katherine and Randy plan on getting married there. Keeping with the theme of Heart, the winery opened on February 14, 2020, Valentine’s Day.

The wines were very good and we all enjoyed our tasting. It was a great start to the day and we continued to Mason which was right down Highway 29 less than 10 minutes away. (Jim’s post)

Our first stop was a reservation at Willow Creek Cafe & Club for lunch with winemaker Don Pullum. Gloria and I have known Don for years back when he was the winemaker for Sandstone Cellars Winery. It was nice seeing Don again and introducing him to Gloria’s brother Lucho and sister-in-law Patricia. Patricia loves cooking and when Don who has a similar passion heard that, there was a lot of talk about cooking and food. It was a fun lunch but we needed to leave to visit our first winery in town. 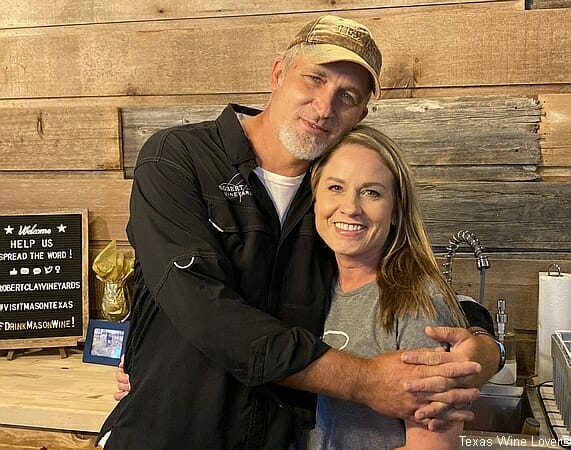 We all had a wonderful time talking to Dan and Jeanie while doing our tasting and enjoying the age-worthy wines. Dan’s oldest wines are from 2015 and that includes Merlot, Sangiovese, and MTR (Merlot, Touriga Nacional, Ruby Cabernet). These wines are what he calls Grand Reserve meaning aged five years with a minimum of two years in barrel.

Dan also prefers making unfiltered wines and the first comparison was between two 2018 Chardonnays that were filtered and unfiltered so people could taste the difference. Some future wines are called Estate Wine Futures but they have not been released yet.

During the tasting, we started hearing rain on the tin roof, and then it suddenly got very loud. It turns out it was hailing too and we all went outside to watch it. The adjacent Parr Vineyards people had also exited their tasting room and both growers were watching the hail and hoping their vineyards were going to be safe. I heard later that thankfully there was no damage to their vineyards. (Jim’s Post)

After we finished up the tasting with Dan and Jeanie, we went next door to visit Robb and Dilek Parr at Parr Vineyards and enjoy their wines. During one of my visits in the past in 2019 with Dan McLaughlin in the production area, Robb was also there and they were talking about opening their tasting rooms. I loved the photo I had taken of both of them back then. 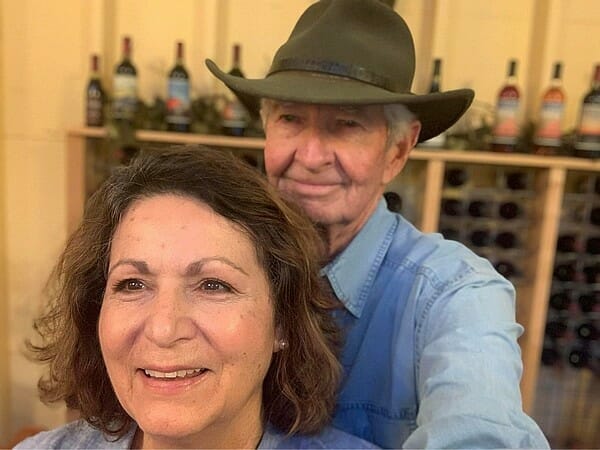 The four of us sat on the comfortable couches and Dilek held our tasting. Even though we had recently had lunch, we enjoyed snacking on a wonderful charcuterie platter. The estate wines were all excellent and included varieties of Tempranillo, Touriga Nacional, Mourvèdre, and Graciano from vintages of 2015-2019. We were all thinking that we had visited three wineries so far in the Mason area and all had excellent wines. This was going to be a good day! (Jim’s post)

At this time, we needed to check into the Red Door Bed and Breakfast which was going to be our stay for the night. I had stayed previously at the B&B and best of all, it is also located right on the square within walking distance.

After checking in, we went to Murphy Creek Cellars. The last time I was there was in 2019 and since then, the tasting room had been remodeled. Owner Lisa Ruthven was behind the tasting bar along with a couple of other tasting guides and they were needed because it was a pretty full house of customers. We tried a sampling of Murphy Creek Cellars 2017 and 2018 Katie’s Miscela. 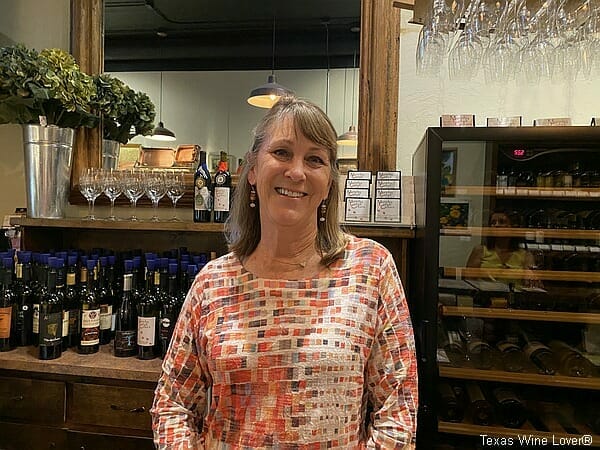 Lisa knew of our plans to visit the Mason wineries and suggested we get going to be able to do it.

Next up was Saba Winery just down the sidewalk at the end of the block. We met co-owner Scott Monette at the winery and while we sat around the tasting bar, he held our tasting. Saba Winery is one of the incubator wineries using Kerrville Hills Winery so you know the wines are good. Currently, there are three wines, a rosé and two reds. Most of the group does not prefer rosé so we enjoyed the two reds instead. 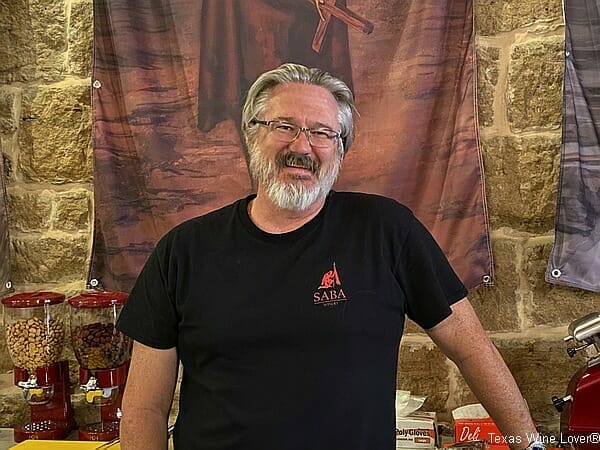 Scott said they are planting a vineyard growing Garnacha, Bobal, Tempranillo, Tannat, and Carignan. One of the things the group noticed on the menu that got everyone excited was the Spanish tapas available. The four of us had gone to Spain previously so it was nice to learn that authentic Iberian Jamon, Lomo, Chorizo, and Salchichon were available right in Mason. Besides the meats, Spanish cheeses (queso) are also available. We were not hungry but we know where we are going to visit the next time when we are hungry! (Jim’s Post)

After Saba Winery was Peters Prairie Vineyard. There were some people already tasting in an area of the winery and we sat in another cozy area while co-owner Kim Pipkin Henderson presented our tasting. All of the wines were very good and most of them were from their estate vineyard. (Jeff’s Post) 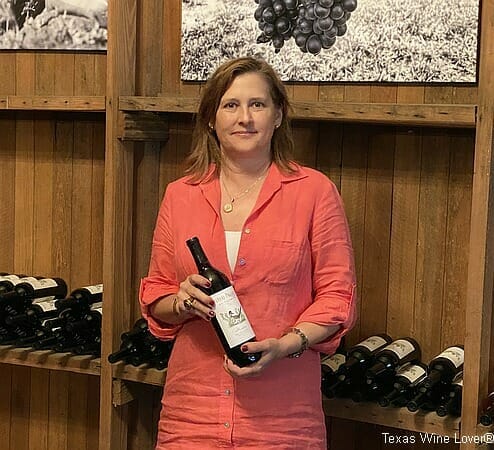 Now it was time to find Fly Gap Winery. When we found it, we were surprised to see Don Pullum there visiting with owner Brock Estes. Don sure makes his way around town! 😊

We began a tasting with Brock Estes in his large tasting room. Brock’s wines were always good and they are even better now, so we all enjoyed tasting his wines. It was a fun time seeing Brock, learn of his upcoming plans, the upcoming plans for the area, and we are looking forward to visiting again. (Jeff’s Post) 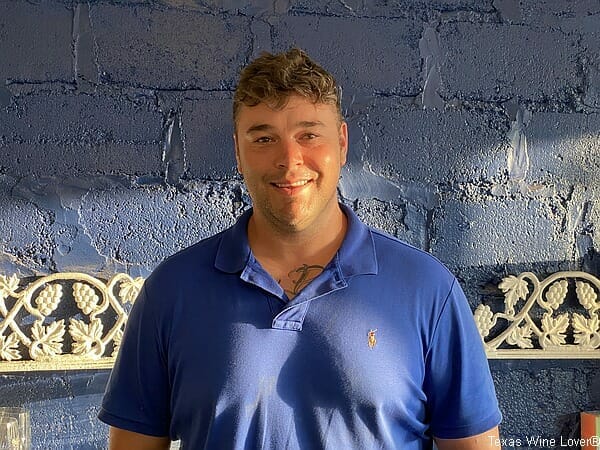 Six wineries in town were visited and we headed to the last, and the first one that was in Mason, Sandstone Cellars Winery. Sandstone Cellars has a wine bar next to the tasting room and that is what is open late at night. We walked past a restaurant that had a lot of people inside and out. The wine bar always had a good crowd when I visited in the past and I was surprised to see no one there when we walked in. After talking to the tasting guide, we realized why. It was high school graduation time and that was the party going on at the restaurant. Unfortunately, the people attending the party also took the parking spots in front of the wine bar leaving nowhere for the regular patrons to park.

Unfortunately, we were told that co-owner Scott Haupert had left about fifteen minutes before our arrival. We did have one glass of Sandstone Cellar’s last vintage wine. Scott called me the next day when he heard we had been there, and I promised the next time we are in Mason, Sandstone Cellars will be the first winery we’ll visit.

As expected, after visiting eight wineries in one day, we all were very tired. Now I will have to say we realized what we were getting into and because of that, at most of the wineries, we shared tastings and dumped frequently. I could not imagine someone doing all the tastings and still being able to walk at the end of the day. Thankfully being in Mason though, walking was all that was needed instead of having to drive.

Sunday came and we had one more winery to visit on the way home. That winery outside of Mason was Wines of Dotson-Cervantes. I had previously checked with co-owner Alphonse Dotson on the business hours but we had some miscommunication. We arrived at the winery’s closed gate at 11 a.m. and the sign said it opened at noon. We had come this far and we love Alphonse, so we decided to sit in the car, roll down the windows, and enjoy the fresh country air and peace and quiet. It was not a terribly hot day so it worked out well.

Alphonse arrived and opened the winery. We learned he was recovering from knee surgery and since Gloria is sure someday she will need to have knee replacements too, the first fifteen minutes sitting at the tasting bar was talking about knee replacements. Like anybody who knows Alphonse, you can just sit there and listen to his stories about anything all day. But I was getting a little thirsty so it was nice when the tasting began. 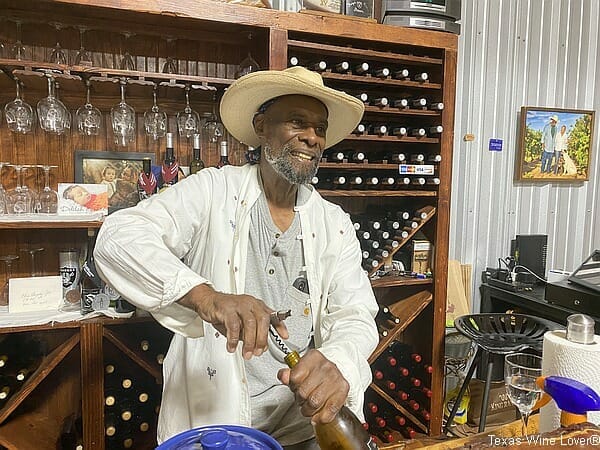 He presented his wines and with each wine, there is a story, whether that be the making of the wine or the name of the wine. It was a fantastic tasting and it was nice to introduce Lucho and Patricia to Alphonse Dotson. (Jim’s post)

During our weekend, we all discovered that Mason, Texas, is now a wine destination with helpful happy faces everywhere to help you enjoy your wines. We liked wines at every winery we visited and that is a great statement to say after visiting nine wineries. More than one winery had told us that an eighth winery in town will be opening later this year on the square and that winery will be owned by Bill Blackmon, co-owner of William Chris Vineyards. You know those wines will be great!

When you’re thinking about visiting wineries for a weekend, instead of being concerned with driving, take a trip to Mason and walk to excellent wineries instead. I would suggest planning on visiting the wineries over two days so the visits are more evenly arranged.