When we announced that we were going to visit Mason, several members of Texas Wine Drinkers emphasized that we needed to visit Dan and Jeanie McLaughlin at Robert Clay Vineyards. We were grateful that Dan was available for a while – he was busy in the vineyard that afternoon and made a trip to town to visit.

Dan and Don Pullum talked shop for a while – some of which I understood – until Don said, “Let’s you and I stop talking shop and start talking wine.”

“Not California Chardonnay.” (Julie made “a face”)

“That’s the same face I made when Dan told me that there was Chardonnay in the vineyard.” (Jeanie) Dan had told her that they could make it different.

This is Robert Clay Vineyards (RCV) Texas Chardonnay: The same three neutral oak barrels for every vintage. Unfiltered & unfined (forced settling of sediments). Not oaky and buttery, but still big in the mouth.

Jeanie poured us two glasses each: the 2018 Chardonnay, unfiltered/unfined that is their normal Chardonnay, and one that was filtered. They both expressed a lot of green apple/pear with hints of ginger, but the mouthfeel was much fuller and layered with the unfiltered than with the filtered.

Next up was a 2017 Albariño that they had “inherited” from Compass Rose Cellars, a winery that closed a few years back. It had a nose of fresh green table grapes – the first wine I have ever known to present that way to me. The flavor, however, was befuddling me and I pulled out my tablet so I could get the colors down. I didn’t do a complete Visual Tasting, but I “dabbed” the colors that I tasted. This started a short conversation about synesthesia. My “tasting notes” for the Albariño are on the left: 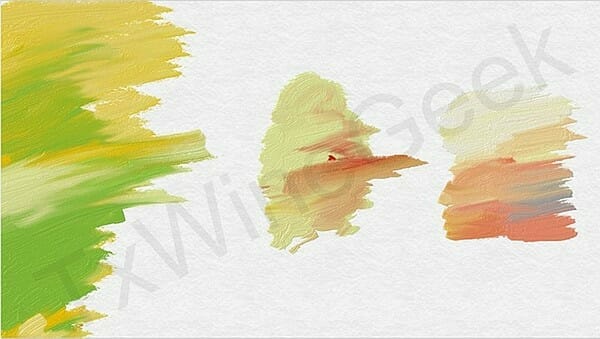 Looking back, that was grapefruit, orange peel and pith, and ripe pear. Slightly nutty.

How about a 2018 Rosé? This is 75% vat-fermented Chardonnay blended with their “free run” GSM. Dan’s comment: “You smell the Chardonnay and taste the GSM.” The Visual Tasting snippet in the middle shows that with cherry smack in the middle.

Dan had a bottle open of his last Ruby Cabernet (whose vintage I forgot to note), so we lucked out there. It hit me with bright cherry, plums, with open smooth tannins – not mild, but smooth. It had a vague creamy finish to it on top that I always like.

Robert Clay Vineyards was the first to plant Touriga Nacional in Texas. A bold call, right? Pardon the pun, but it is a bold grape; however, it seems to tame in the hands of Texas soil and growers. Our first exposure to RCV Touriga was the Sandstone Cellars VII. It was a huge wine served at Pappas Steakhouse in Houston and Highlighted in Saveur (Oct 2012)

2016 Touriga This is being served in Houston at Chris Shepherd’s Wild Oats restaurant with several other #RealTexasWines (thanks to Matthew Pridgen, Wine Director of former Underbelly, perhaps?) and priced fairly, too.

2017 Touriga: As-yet unreleased, Dan let us taste this to compare with the 2016. (Note: He holds all of his reds for 12 months after bottling to ensure that they can catch “corking.” This is after 52 months in the barrel.)

The 2017 hit me with a smoky campfire, burned marshmallows, and hoisin sauce, leather, stewed fruit – very savory. It’s on hold until 2023…(we did ask, though)

The 2016 hit us with rich Luxardo cherries, prunes, leather, and forest. 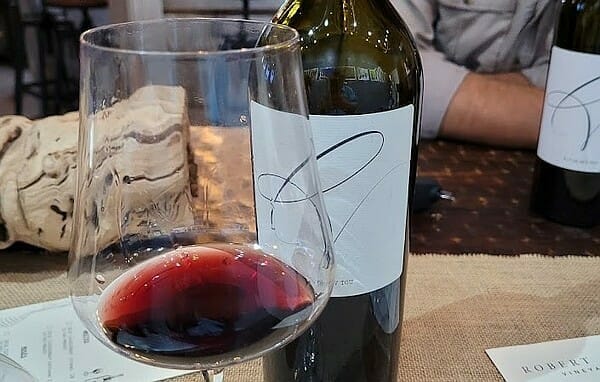 I’m going to finish with the 2015 Merlot: 26 months in French Oak, 200 cases, estate-grown, and the taste I had at the winery hit me as a fruit bomb with crazy tannins (that’s my note!). I am SO glad that I bought a bottle to bring home. I opened that tonight and it poured with a very cherry-vanilla pipe tobacco nose. It is very fruit-forward, but not a bomb. It’s carrying the cherry and tobacco to the palate along with still-tight-but-opening tannins. The finish is the tobacco, very mild, in the back of the mouth. For me, this is a very pleasant experience. Worth laying down for a few more years, which means that I need to get some more.

It’s worth making the trip to Mason to visit, experience the wines, and consider getting on the list for Futures. There are some excellent wines that are in the wings that I’m eager to get my hands on.