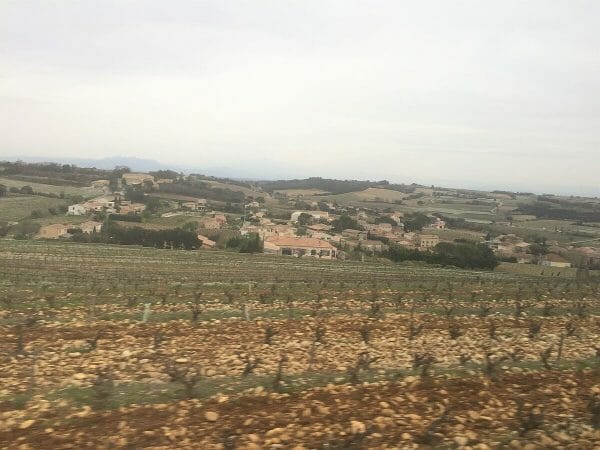 Because of rolling hills and rocky landscape, sandy, gravelly soil types, and hot, dry, windy climate conditions in the southern Rhône Valley of France, grape varieties that thrive there also tend to do quite well in many regions of the Lone Star State. Classic Rhône white varieties like Roussanne, Marsanne, and Viognier, plus red varieties like Grenache, Syrah, and Mourvèdre are well-known in Texas for producing quality wines. Since these Rhône variety grapes produce wines that are so popular, it seemed worthwhile to explore the grapes, the wines, and some of the fascinating history behind the Rhône Valley region of Châteauneuf-du-Pape, as well as an interesting story of how many of these grape varieties, came to the U.S. and the Lone Star State.

Nowhere are these Rhône variety grapes more important than the famous wine region known as Châteauneuf-du-Pape (CdP). The wines of CdP, mostly red, but also a small percentage of white wines (only 7% of total production), are generally exceptional. They are mostly blends, often featuring Grenache, Syrah, and Mourvèdre. As good and impressive as are the wines, the history of this region is quite fascinating, too.

Focusing first on the grapes, below is a list of varieties that are “allowed” by French law to be included in the wines labeled as Châteauneuf-du-Pape AOC. Note that there are 13 primary grape varieties, and with their variations or mutations, the total comes to 20! Most of us who visit Texas wineries and enjoy Texas wines will recognize several of these. However, there are some pretty obscure varieties included that will likely be unfamiliar. Also, note that included in the mix are red, gris (grey or moderately colored), and white varieties.

It is interesting to note Viognier and Marsanne are not included. Viognier is the key white grape in more northerly climes of the Rhône Valley, particularly Côte Rôtie and Condrieu. Viognier may be blended up to 20% with Syrah in Côte Rôtie red wines, while Condrieu white wines are 100% Viognier. Marsanne is commonly used in other Rhône Valley areas (i.e., Hermitage and Crozes Hermitage) and southern French regions (Languedoc and Roussillon) but is not included in the mix for CdP.

Without the efforts of Château de Beaucastel, an important producer in Châteauneuf-du-Pape, several of these grape varieties may not have survived. Beaucastel makes an effort to include as least a bit of most of these allowed grapes in their red and white blends. For example, white varieties like Grenache Blanc, Piquepoul Blanc, Clairette Blanche, and Picardan, and red varieties like Counoise and Cinsault were imported from France in 1989 and established in a vineyard, nursery, and winery called Tablas Creek in the Adelaida District of Paso Robles, CA. Tablas Creek originated as the U.S. outpost for Château de Beaucastel, owned and operated by the Perrin Family, in collaboration with their U.S. importer, Vineyard Brands, owned by the Robert Haas family. 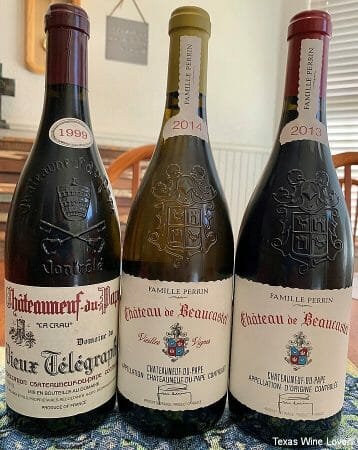 The original importation and planting of nine varieties occurred in 1990 and included the now popular Counoise, Grenache Blanc, and Piquepoul Blanc. Later, in 2003, a second set of seven varieties was imported and planted, including Cinsault, Picardan, and Clairette Blanche. Many vines from this Tablas Creek vineyard have been propagated and sold to growers on the West Coast and in Texas. At its peak, about 200,000 vines per year were bench-grafted for use at Tablas Creek or sale to interested growers. NovaVine Nursery in Santa Rosa, CA, now operates the nursery vineyard and markets grafted vines to other wineries. It is important to note that the efforts of Beaucastel and Tablas Creek may have actually saved some of these more obscure grape varieties.

Châteauneuf-du-Pape is one of the most important wine regions of France, and can be noted as having the highest alcohol by volume requirements of any French Appellation d’Origine Contrôlée (AOC). CdP was the first official French AOC established in 1929. The region consists of a large plateau, called Le Crau, covered with galets, tan-colored stones from an ancient riverbed, and several neighboring hills rising above the Rhône River. Over 300 growers produce about 14 million bottles of wine each year from nearly 8,000 acres of vines – about 75% planted to Grenache.

There are three distinct soil types in CdP: iron-rich red clay under the galet stones, chalky, limestone-rich clay, and mixtures that contain more sand and gravel. It is claimed that the galets serve to minimize water evaporation from the soils underneath and reflect the sun onto the vines above to enhance ripening. As you would expect, different grape varieties do better in certain soils and bring different flavors to the wines that are essentially all blends of some type. 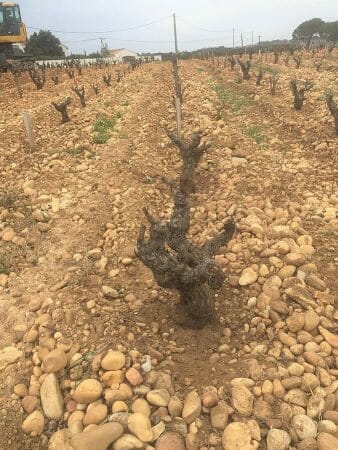 Galet stones covering the ground under an old, gnarled head-trained vine in a Châteauneuf-du-Pape vineyard (Photo courtesy of Paul V. and Merrill Bonarrigo)

Since almost all CdP wines are blends of various allowed grape varieties, there can be a fairly wide range of styles, aromas, and flavors. Typically, when produced with a large or majority portion of Grenache, dark red berry, plum, raspberry, and sometimes strawberry fruit can be found. Wine writers often describe non-fruit aromas and flavors of leather, wild game, and herbs. In fact, garrigue is an often-used tasting note, a French term suggesting hints of rosemary, sage, and lavender herbs widely grown in the region.

Winemaking techniques employed by various producers can have a significant influence on the overall aromas, flavors, and textures of CdP wines. One technique that varies among producers is whether the grapes are completely destemmed, partially destemmed, or fermented and pressed with the stems fully intact. Leaving stems will increase tartness or bitterness and the overall tannin structure in the wines but can also improve age-ability. It is common to leave more stems in vintages that need more texture and to destem in other vintages to create softer, more fruit-forward wines.

Another key difference among producers is the use of different types of fermentation and aging vessels. Oak fermenters and barrels for aging are not so common in CdP as many other French regions like Bordeaux, Burgundy. More common today are vessels made from concrete or stainless steel that offer less flavor impact on the wines, especially Grenache cuvées, and better temperature control in a region that can get quite hot during August-October harvest time. New oak is sometimes used, but mostly with bolder varieties like Mourvèdre and Syrah. 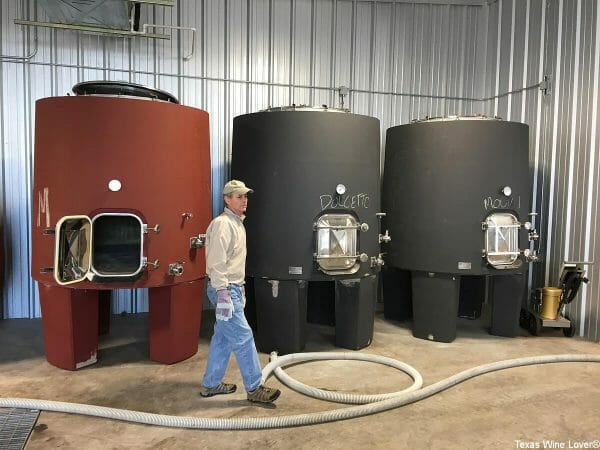 Concrete tanks, like these at Southold Farm + Cellar are commonly used for fermentation and aging in Châteauneuf-du-Pape wineries and are becoming popular in Texas

Wines simply labeled GSM are another popular Rhône-style wine often produced in Texas and in many other wine regions around the world. GSM stands for Grenache, Syrah, and Mourvèdre, and this moniker has been widely accepted since Australian wine producers started using the term to avoid direct reference to Châteauneuf-du-Pape. Today, GSM is a common way to designate a CdP style wine since the name of that French AOC is a protected place name and by international agreement is not to be used outside of Châteauneuf-du-Pape. Thus, Texas producers like Ron Yates Wines, Messina Hof Winery, and Pedernales Cellars refer to their blends that use primarily Grenache, Syrah, and Mourvèdre, as GSMs. 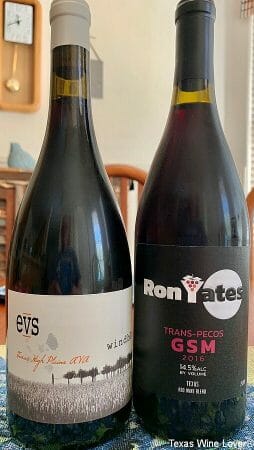 The history of CdP is pretty fascinating, and the references below cover the story well.  Châteauneuf-du-Pape literally means “new castle of the Pope.”  Back in the 14th Century, the French Emperor and aristocracy were very powerful and had great sway on who would be elected Pope. For nearly 100 years some French Popes established the home of the papacy near the Rhône Valley town of Avignon. A castle, the “Palais des Pape” (actually a fortified compound), was built in the nearby village and some ruins remain there today. Eventually, the seat of the papacy was re-established in Rome at the end of the 14th Century.

Despite a long history of the area’s involvement in growing grapes and making wine, establishing Châteauneuf-du-Pape as France’s first appellation did not happen until the 20th Century. In the 1920s, Baron Le Roy, owner of the famed property Château Fortia, developed a set of specifications to define the area, the grapes allowed, and various growing and winemaking practices. This became the model for the French AOC system, and CdP was declared an AOC in 1929. One sort of funny addition to the AOC rules for CdP occurred in the 1950s when the village passed an ordinance forbidding flying saucers from taking off, landing in, or flying over the vineyards for fear that grapes would be harmed. That ordinance is still in effect today. LOL! 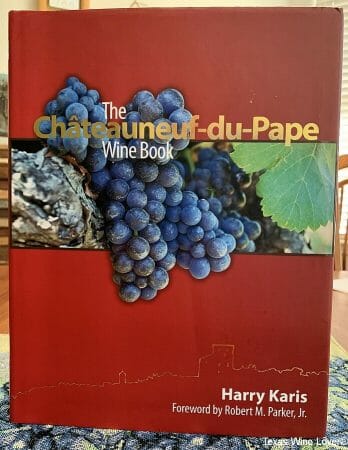 Turning back to the Lone Star State, these Rhône variety grapes have a major impact on the Texas wine industry. As in France, different varieties thrive in various soil types and climate areas. The grapes then contribute different characteristics to the blended wines that are produced in the CdP style. Syrah tends to grow in cooler areas (think Texas High Plains) and adds structure, spice, black fruit aromas and flavors, and a kind of smoky note. Mourvèdre ripens later than either Syrah or Grenache and is most often planted in hotter, drier vineyards. Mourvèdre is well-known for contributing dark colors, black fruit aromas, and flavors, and often a dark or bitter chocolate note. It is often produced as a single or predominant varietal wine.

Other red grapes are also important. Cinsault and Counoise are used in blends and often as base grapes for the currently popular Texas rosé wines. Carignan is seen in blends, rosé wines, and even in stand-alone varietal bottlings. And, in recent years many of the white Rhône grapes have come to the fore in either tangy, perfumed blends or richly flavored varietal bottlings. A Piquepoul Blanc 2015 grown by Lost Draw Vineyards (THP) and produced by McPherson Cellars was awarded Best White Wine in Show honors at the 2016 San Francisco International Wine Competition. That created a lot of interest, both on the West Coast and in Texas, and there are now several Piquepoul bottlings available from Texas vintners. Roussanne is a pretty standard varietal bottling for many Texas producers and tends to fill in the style gap for Chardonnay that is more difficult to grow and produce in Texas. Grenache Blanc, Picardan, and Clairette Blanche wines are now becoming available as offerings in a few Texas tasting rooms.

Grape varieties that thrive in the southern Rhône Valley of France have come to the Lone Star State and are doing quite well. Texas growers and winemakers are crafting some really good wines – red, rosé, and white – that we Texas wine lovers are truly enjoying. Many of these wines are also garnering high praise and awards at prestigious competitions. Having now learned more about these grapes and their history, particularly their role in the marvelous Châteauneuf-du-Pape AOC, visit your favorite tasting rooms, along with some new ones, too, and further explore the success of these Rhône grape varieties in Texas.

References that tell some of the fascinating story of Châteauneuf-du-Pape:

Guide to Châteauneuf-du-Pape Region and their Wines https://winefolly.com/deep-dive/all-you-ever-wanted-to-know-about-chateauneuf-du-pape-wine-and-more (by Madeline Puckette)