Our friend Rene Pilarte was having a milestone birthday, and he and his wife Carmen, invited us to go to some Hill Country wineries on a weekend with them to celebrate. Wineries? Okay! Also on the trip were Rene and Carmen’s daughter Carmen Carolina with her boyfriend Andrew, and our usual wine group, Lucho and Patricia Rivas, Gloria, and me.

The Pilartes had some suggestions on where they wanted to go and made reservations at one winery but wanted some recommendations, so I helped out with plans for other wineries. We were to leave early on a Saturday and return on a Sunday.

We took two sets of cars on that weekend and arrived for our first tasting at William Chris Vineyards. Since the tasting was by appointment, the winery had everything ready for us when we all arrived at 10 a.m. including a wonderful glass of Mary Ruth at the check-in location. The weather was already getting a little warm even that early, so the chilled white wine was very refreshing. The new Hye Society tasting room does not really have tables for eight people, but they were able to provide two tables of four set up near each other which worked fine. 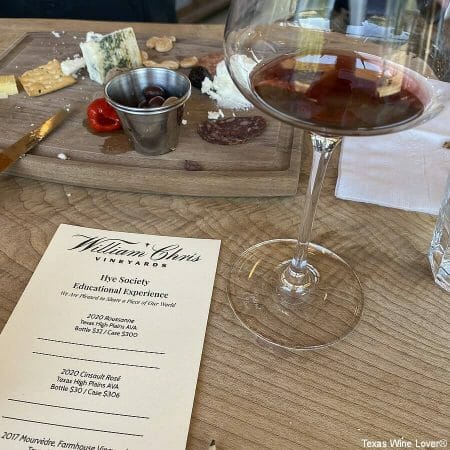 We all had the Hye Society Educational Experience tasting along with two charcuterie boards that helped during the tastings. Remember our appointment was at 10 a.m. which meant we left Houston before 7 a.m. Not many people were able to have breakfast in order to make the appointment time.

Everyone remarked how nice the tasting room building was and at the end of the tasting, we received many thanks for a great start to the weekend. There were no appointments until 5 p.m., but we certainly had plans. Lucho and Patricia had to pick up wine club wine at Pedernales Cellars, so we told the Pilartes we would meet them at the next tasting location, Covington Hill Country.

After picking up the wine at Pedernales, we met the rest of the group at Covington Hill Country. I was excited to visit the tasting room for the first time since we (Texas Wine Lover) had previously published a couple of posts about the new tasting room and the wines sounded fantastic. Even more exciting was Covington Hill Country had recently become an advertiser with Texas Wine Lover. 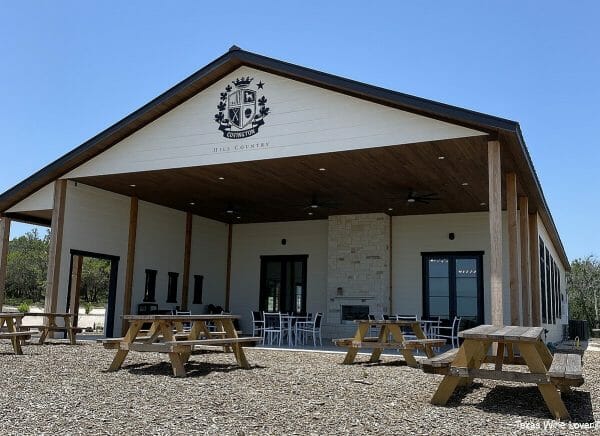 We all had a tasting that was very similar to Amie Nemec’s tasting that we published. We enjoyed five-plus wines including a 100% Texas Tempranillo. Carmen was able to bring into the tasting room an assortment of appetizers with meat and cheese she brought from home, and we all were enjoying our visit tremendously.

During our tasting, I noticed a bus for Hill Country Wine Tours arrive with some customers ready to do their own tasting. Talk about coincidence—Hill Country Wine Tours is also an advertiser with Texas Wine Lover! I had to say hello to the two women who were on the tour after they started their tasting. They said the tour had been fantastic so far, and it was nice the appointments were already made, the transportation was there, and they just arrived and started tasting.

Our group finished our tasting, including a couple of extra wines not on the tasting menu, and the entire group all agreed this stop was an excellent choice. The next winery planned was down the road at 12 Fires Winery.

The last time our regular wine group was at 12 Fires Winery, we sat at picnic tables underneath the trees and it was an enjoyable visit. The owners at that time showed us plans for how the winery was going to evolve including a future tasting room. When we arrived this time, we were surprised the path we took for the tasting was a little different than last. At the end of the path, we found a small tasting room trailer and behind that, there was the new tasting room under construction. I then remembered reading the new tasting room was planned to be ready by the end of the year.

We entered the small temporary tasting room, and I was surprised immediately to see one of my wine friends and loyal Texas wine lover, Norma Fox, and her husband Martin. The owners had to attend an event that weekend, so Norma and Martin offered to help out by pouring wine that weekend. They started the day before, so our little group was on their second day, and they did a fantastic job guiding us during our tastings.

The wines were all very good at 12 Fires, and I was surprised to hear the 2020 Doce Uvas was a blend of 12 different grapes! That would make sense though because Doce Uvas is Spanish for twelve grapes (I personally had to look that up, but my companions would have been able to translate it for me). That is definitely the most grapes I have ever had in a blend. And it was good! I wonder if it was just a coincidence there were 12 grapes for 12 Fires Winery.

All in all, it was another excellent stop on our little wine tour. Next was another wine club pick up needed, this time for Gloria and me at Ron Yates. The Pilartes would take their time heading to our next location while we went to pick up the wine. 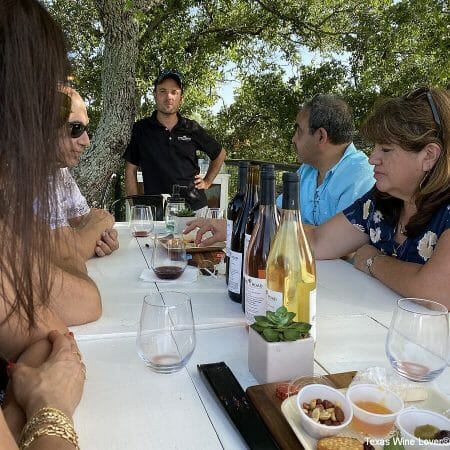 The next winery was the planned appointment at 5 p.m. at Sandy Road Vineyards and in the treehouse. This was another winery four of us all loved during our previous visit and, in fact, Lucho and Patricia had become case wine club members. When we arrived at the vineyard and treehouse, the Pilartes were already at the lower tasting shelter and came to the treehouse along with co-owner Bryan Chagoly.

Before the tasting started, I peeked at the vineyard and the grapes were netted and looking like they were doing very well on their way to their eventual harvest.

Our little group had the run of the treehouse overlooking the vineyard, and it definitely is one of the most scenic tastings in the Hill Country. The tasting included such favorites as Roussanne, GSM Rosé, Sangiovese, Mourvèdre, and Tempranillo. We all enjoyed the tasting while snacking on a charcuterie tray. One thing for sure is that we ate a lot of meat and cheese that weekend!

After a day of wineries, it was now time to have some dinner. Because of all the charcuterie we had during the day, nobody was starving, but we were really looking forward to dinner at Hill & Vine which we had heard so many good things about. Hill & Vine is owned by Jesse Barter, the former general manager of 4.0 Cellars (now Texas Wine Collective). Jesse was always cooking at 4.0 Cellars events so eventually owning a restaurant made perfect sense. 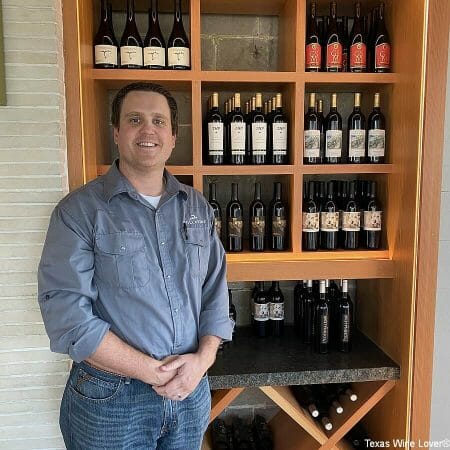 Hill & Vine is on South Adams Street in Fredericksburg, but you have to watch closely as it is nestled among a row of houses, but there is ample parking in the back of the restaurant. Hill & Vine is a little different where they do not take advanced reservations. Instead, you join their waitlist, and you will receive a text message when your table is ready.

The restaurant had a good selection of foods including salads, sandwiches, burgers, fish, and steaks. An ample wine menu was available with, of course, Texas wine on the list. Everybody enjoyed their meals and we agreed it was an excellent ending to the day.

We woke up on Sunday, and after breakfast at the hotel, we headed back to Houston. Of course, we had some stops along the way.

The first winery visited was Graveyard Vineyards in Dripping Springs. The winery is actually a tasting room for the winery located in Paso Robles, California. Because of that, we knew there would be wines from Paso Robles, but after I visited Paso Robles four years ago, I was excited to try more of the wines. 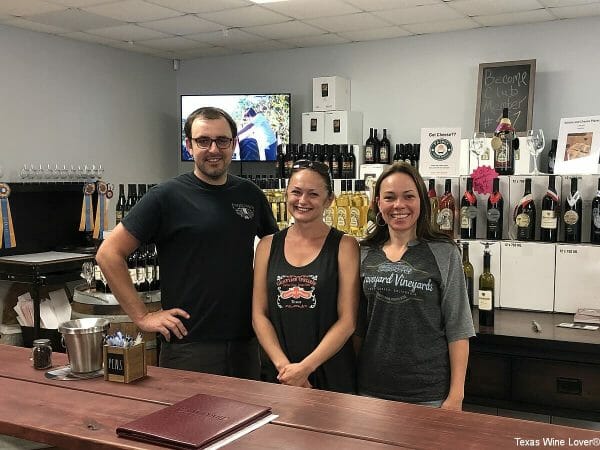 We met manager Adam Campbell-Taylor and the staff at the tasting room and proceeded with a tasting. The tasting at Graveyard Vineyards included six wines but there are some others that can be tried. There was a white and rosé blend, and the rest were red wines. All of the wines were excellent, and it was tough to pick our favorites to purchase. The Paso Tombstone Red was enjoyed which is a blend of Cabernet Sauvignon, Syrah, and Petite Sirah. Scream in a glow in the dark bottle was also excellent and that is a blend of the same grapes, but bolder. All in all, we were all pleasantly impressed, and we will be returning to Graveyard Vineyards in the future.

Literally, right next door to Graveyard Vineyards is Parmeson Wines, so that was our next stop. Tastings were a little different where you ordered your tasting flight at the counter, and they gave the flight to you there. You then had a choice of enjoying the tasting in the back room of the tasting room or outside on a picnic table. Our group chose a picnic table underneath the trees. 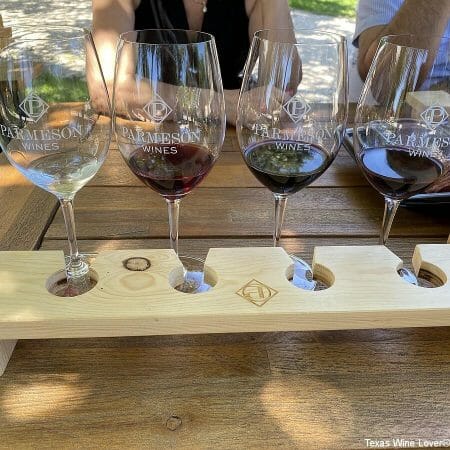 The wine flight was a selection of four wines out of eight which included three whites, a rosé, and four reds. All of the wines are from California. Owner/winemaker Tom Parmeson moved his family from Houston to California in 2013 to become a winemaker and start their own brand. In 2018, they moved back to Texas with the operation, and Dripping Springs is where they are today.

Most of the group was a little worn from the weekend already, so the men represented the group by selecting our tastings and retiring to a picnic table. The large appetizer box that Carmen had brought from Houston was opened and we were snacking and tasting again. I really enjoyed the Pinot Noir from Sonoma Coast, and a bottle came home with us.

We knew we had one last stop before we made it home, and that was at Busted Oak Cellars outside of Carmine. If that city doesn’t sound familiar, it’s a very tiny town. If you have driven from the Houston area to Austin on 290, Carmine is the town that you have to slow down to what seems like a crawl for about half a mile.

The last time our regular wine group was at Busted Oak Cellars, we sat outside on the back patio and most of the group enjoyed the white and red sangria. We were looking forward to it again. I told co-owner Sherrie Cookie ahead of time that we were arriving in case we needed reservations for eight people. During the weekend though, we learned Carmen Carolina and Andrew would not be joining us since they live in Austin. 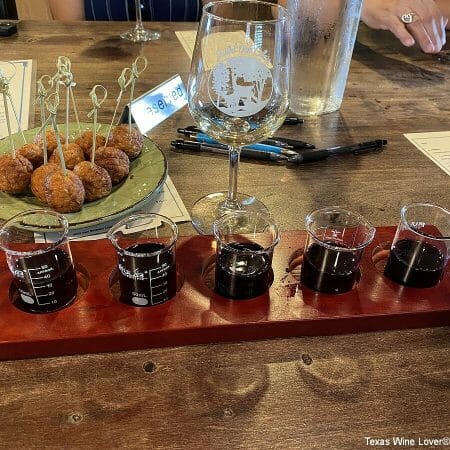 When we arrived at Busted Oak Cellars, Sherrie had a reserved table for us, and we were ready to enjoy some wine. Some of the group immediately went to the sangria and a couple of us did a tasting of the wines. The tasting flights were brought out in a paddle with little beakers of the wine. It was a pretty cool presentation.

After multiple rounds of sangria and wine were enjoyed, it was now time to call our weekend trip to an end and part ways. We had some fabulous wines during the trip, enjoyed family and friends, and learned celebrating a birthday in the Hill Country is a wonderful choice! 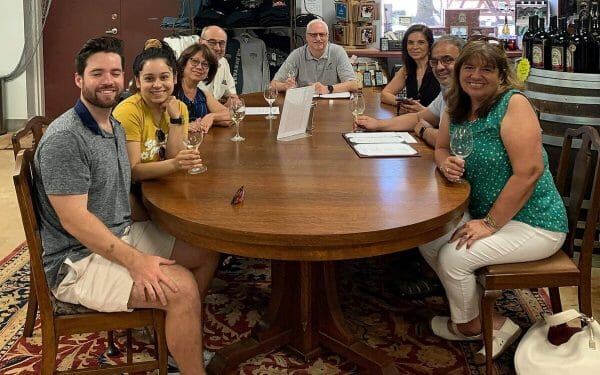