After a wonderful four days in the Texas High Plains, it was time to head back home to Houston. However, I wanted to take advantage of the wineries on the way in North Texas and the Fort Worth area that I don’t usually get a chance to visit.

First up was Arché in St Jo. It is always enjoyable stopping by the tasting room and seeing it grow in recent years. There is now a very nice tasting room with an adjacent covered patio. I saw winemaker Grayson Davies helping other guests and soon he was leading me in a tasting. I had a delectable tasting of Arché’s white and red wines. Of course, I had to take home some Chardonnay!

I wasn’t alone for long because my friend Laurinda Thomas, who had planned on meeting me at my next stop, came by to start our visits early. She enjoyed a glass of wine while I finished my tasting. We then said goodbye and headed to nearby Blue Ostrich Winery. 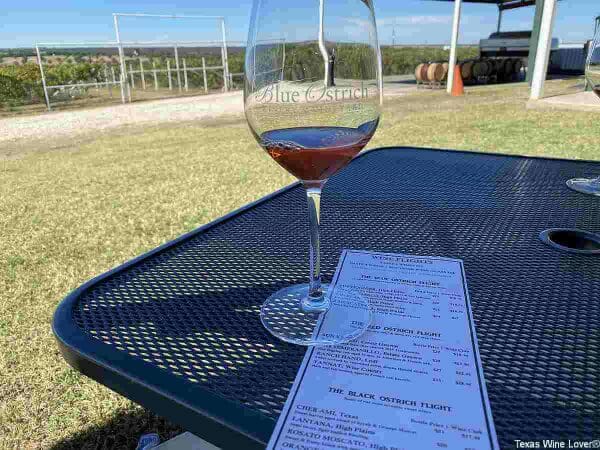 I had previously made an appointment at Blue Ostrich Winery and we were seated at a nice outside table overlooking the vineyard. Shortly into our tasting, co-owners Julie and Patrick Whitehead visited with us. It was interesting seeing how everyone with face masks and shields, which was commonplace now, almost seemed like we have been doing it for years. We enjoyed our tasting, purchased wines, and began the 45-minute drive to Marker Cellars.

This was my first time at Marker Cellars since they had increased the size of the tasting room and it looked very nice. Laurinda is a wine club member also at Marker Cellars, so co-owner Mark Rogers knew where to seat us when we arrived at a nice outdoor table. I had the chance to finally meet winemaker Mark Germany for the first time and he led our tasting of the wines. Unfortunately, his Ralvin Ciders was sold out so we couldn’t try those. It was a beautiful day sitting outside, watching the nearby horses, and enjoying wonderful wine with a charcuterie tray. 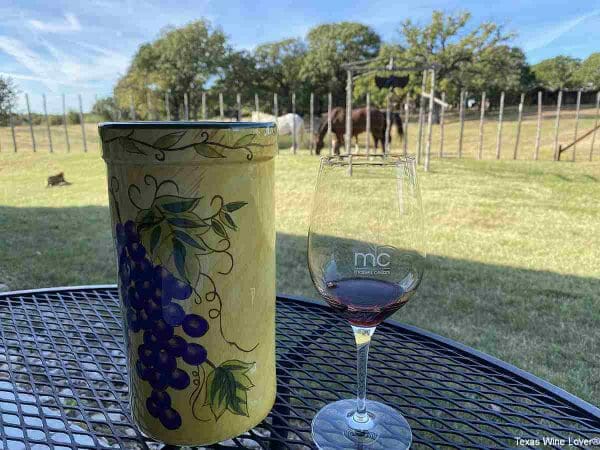 Mark gave us each a copy of the latest Cross Timbers Wine Trail magazine for which they are members. This wine trail is the second largest in Texas and is quickly becoming the destination for you to visit. I made sure I kept the copy so I could mark up the wineries I wanted to visit in the future.

Laurinda and I then left for our last winery of the day, Deschain Cellars. I had been anxious to visit the winery since I talked to the owners Willem Johnson and Kristin Mapstone at the Texas Wine & Grape Growers Association (TWGGA) conference earlier in the year. Besides being a new winery, the winery was being built from decommissioned shipping containers so that was going to be interesting to see. 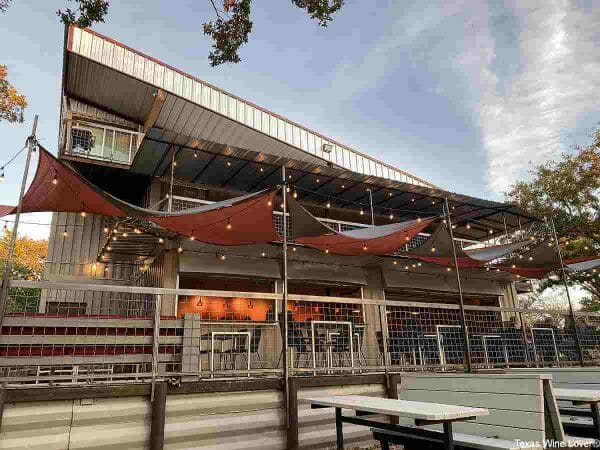 After taking a winding road through the trees, the winery is then found sitting atop a small hill. If you didn’t know the building was made from shipping containers, you wouldn’t realize it other than seeing the metal walls. We found a table on the second floor overlooking the trees and began our tasting which was our selection of four Texas wines. Soon Willem Johnson arrived to say hello and talk about his wines. As the evening was getting darker, it was providing a peaceful environment to enjoy wine and end the day.

Laurinda had decided to also visit some wineries on Saturday with me so we went to our separate hotels to get a good night’s sleep. We met on Saturday at Umbra Winery at La Buena Vida Vineyards as soon as they opened at noon.

Umbra Winery has a beautiful facility with the tasting room on top of a hill. We had a choice of five different wine flights with three wines per flight. I was hoping to taste just Texas wines but there wasn’t a flight of those, so I chose a flight with one Texas wine and two Washington wines. Laurinda chose a different flight that also had the same mix of Texas vs. Washington wines. Laurinda’s one Texas wine was called Red Velvet and was a Pinot Noir. I always ask what vineyard was used since Texas Wine Lover has an extensive Texas vineyard list, so I asked that of the Red Velvet. We were told it was from Washington grapes. That was odd since the menu said Texas, so we asked to see the bottle and the bottle also said Texas on the front label. We were told again it was Washington grapes, and after explaining how it’s supposed to be 75% Texas grapes if it has Texas on the label, the guide went to check with somebody else. Upon returning, we were told again it was Washington fruit. Hmm… 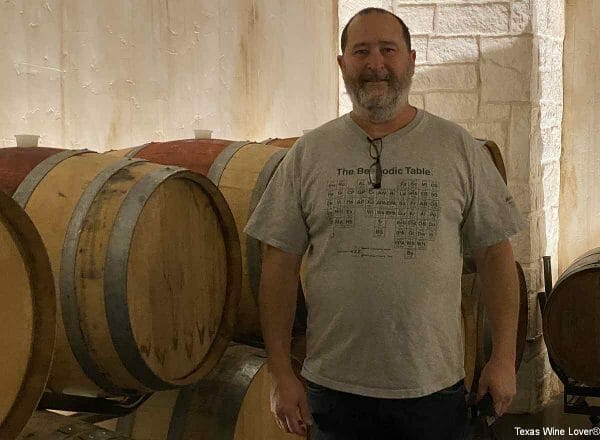 I had previously emailed owner John Wilson that I was going to visit, and he soon arrived and gave us a tour of the facility. The event space is widely used for weddings and other events. Beneath the tasting room is the barrel room which also provided another space for events. There is a plaque nearby honoring Dr. Bobby Smith:

“In 1973 Dr. Bobby Smith established La Buena Vida Vineyards with the dream to help create a thriving wine business in Texas. For over four decades he worked with growers, winery owners, and legislators to help bring the industry to where it stands today. We are honored and grateful to be given the opportunity to stand on his shoulders to bring the third oldest winery and vineyard in Texas, Umbra Winery at La Buena Vida Vineyards, to the next generation of wine lovers.”

I remembered meeting Dr. Bobby Smith before, so it was nice to see this honor in the remodeled winery. We thanked John for the tour, said goodbye, and began our trek to the next winery.

The next winery was Dove Ridge Winery for which Laurinda had written before for Texas Wine Lover. It was my first time visiting and it was a long time waiting to visit before I could finally make it. I had previously contacted the winery to confirm operating hours, so they were waiting for us. Upon entering the tasting room, owners Joey Benefiel, Patti Bush, and winemaker Forrest Benefiel greeted us. First was a tour of the estate.

We hopped into a golf cart and headed up the hill, past the large vineyards, and reached Dove Ridge Vineyard which is the event center. Outside the event center is a large, covered space with a fireplace overlooking the beautiful surrounding view. This makes a very impressive location to hold an event like a wedding for which it had been set up for an upcoming wedding that day. Inside the event center were the tables for the wedding reception in the enormous event space. The tour continued upstairs where the bridal suite was located with a balcony overlooking the reception area. This was definitely a nice place to get married. 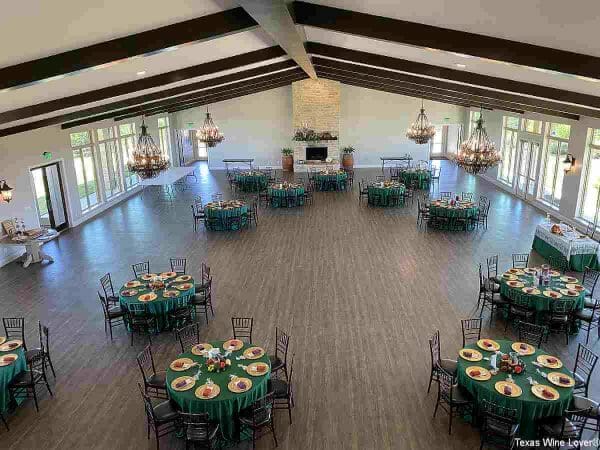 We returned to the winery and proceeded to do some barrel and tank tastings. There were wines that would be bottled very soon and others which were not, but we thought were ready. Returning to the tasting room allowed us to enjoy a wonderful charcuterie tray with some finished wines. Overall, it was a very impressive visit to Dove Ridge Winery and I know I will be visiting again when I’m in the area.

I had to leave to continue my winery visits, so I thanked Laurinda for keeping me company during my visits, said goodbye to our wonderful hosts, and made my exit.

I was going next to Rancho Loma Vineyard’s newly opened tasting room in downtown Fort Worth. I had been to the winery in Coleman a couple times, but this was my first visit to the Fort Worth location. Even better was being able to see again two wine friends who were now working there, CJ Hatchett and Lauren Murray. My GPS brought me to the winery, I saw the sign outside the building, but I couldn’t find the entrance. I eventually found an entrance down an alley. I still don’t know if there is another entrance which is easier. 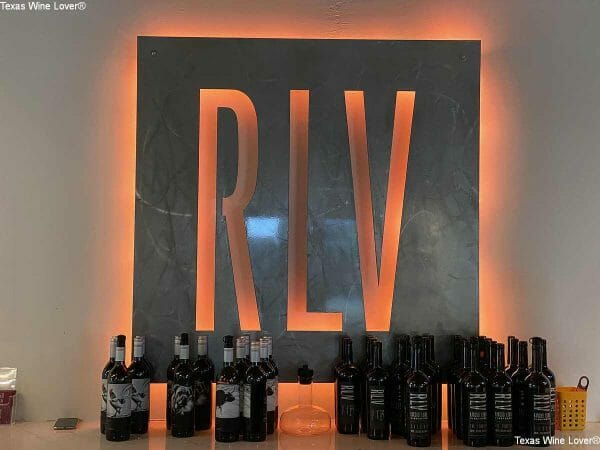 I started a tasting with another guide and soon CJ and Lauren came by and said hello. I hadn’t told them I would be coming by, so it was a surprise to them. The wines that were suggested for me to try were all excellent and to be honest, improved from the previous RLV wines. All before had been great but these seemed to up the ante. It was getting a little late and I still had more places to visit, so I said goodbye to my friends and headed south. 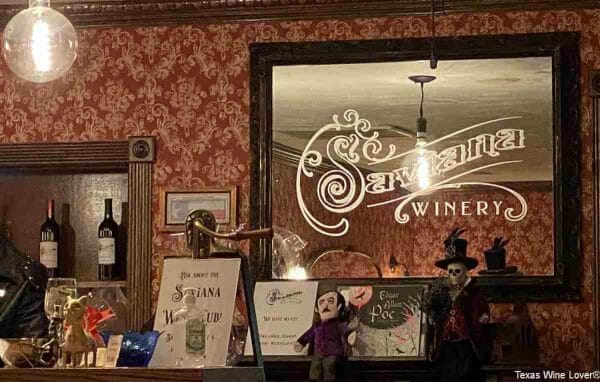 When I arrived at Saviana Winery, it was already dark, but I found the winery and a place to park. I forgot to mention that it was Halloween, so there were now customers dressed in their various costumes, including who I learned later were the owners Julie Denton and Jeff Brown. Most people waiting in line to be seated wanted to sit on the patio but when it was my turn, I opted to take whatever location was available and sat at a table in the tasting room. I decided to just get a glass of wine instead of a tasting flight and enjoyed the wine while watching the customers and the interaction at the bar. Everybody seemed to be having a great time!

It was now time to check in at my hotel but on the way was Cassaro Winery and I just had to stop and say hello to co-owner John Matthews. The winery is always busy and being Halloween, it was especially busy, so I was lucky when I walked in the door and John was right there. I met his son Michael who was also enjoying the costume festivities of the night. After a glass of wine and some more purchased bottles, it was time to call it a night and check into my hotel. 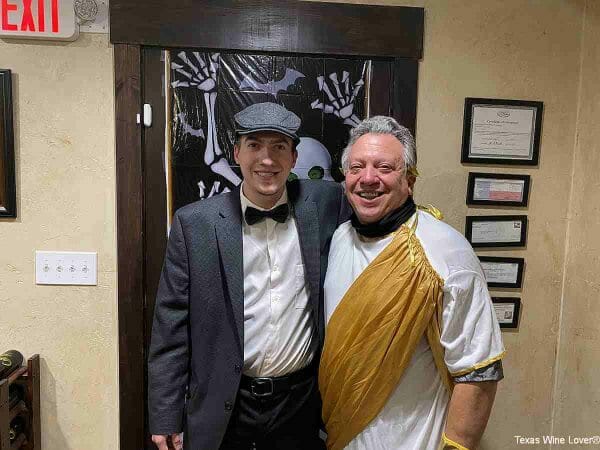 It had been almost one week of visiting wineries in the Texas High Plains, North Texas, and Fort Worth area, and even though COVID-19 changed our lives drastically in 2020, it had been an enjoyable time.