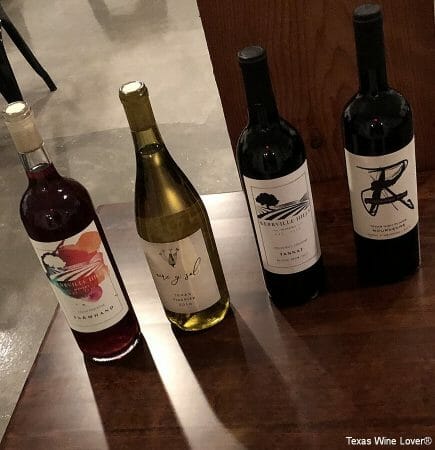 Winemaker tasting dinners and wine tasting rooms, by their name and by their nature, focus on grape varietals and blends. But in this time of COVID-19 requiring balance of food and wine income for wineries, one Texas restaurant is really helping winery owners feature their products.

Bryans on 290 in Johnson City has developed a “word-of-mouth” reputation for high quality food since its opening in January 2016. Long-known for its wine list, Wine Supper Club, and Tuesday Tasting menus, that restaurant is stepping up its support of the Texas wine industry now that it has opened a new, separate catering center on the south side of the original building that fronts on Highway 290.

Owner/chef Bryan Gillenwater developed an interest in wine during his culinary training and is proud that his personal wine cellar will soon have at least two “100 point-rated” wines. Combining that background with fresh and heirloom products, meats, and fish from Texas farmers, ranchers, and coast makes him thankful to be part of the journey that is recognizing what growers and winemakers are producing from Texas grapes. 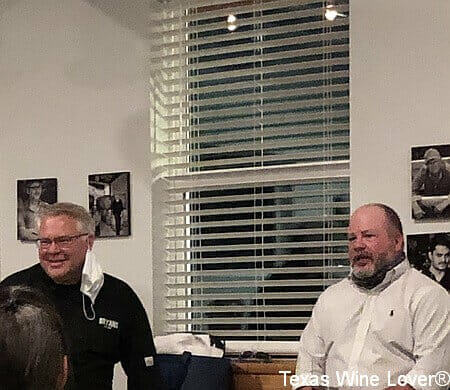 “I am proud that I have a letter from Texas Agriculture Commissioner Sid Miller declaring Kerrville Hills Winery an ‘essential’ business for wine agriculture manufacturing since our tasting room cannot be open under the Governor’s order and TABC regulations,” Rivenburgh told the almost 30 people in attendance. “Tonight’s dinner lets you see what you normally would be tasting.”

In addition, Bryans on 290 also hosts Weekend Wine Tastings, with Siboney Cellars currently being featured after Adega Vinho opened that on-site tasting experience. Tasters are encouraged to taste the wines in the new catering facility between 12 noon and 5 p.m. and then have a great lunch or dinner in Bryan’s dining room.

At the September 18 KHW dinner, Rivenburgh informatively entertained guests as he explained the background for each of the wines paired perfectly by Gillenwater with the food. 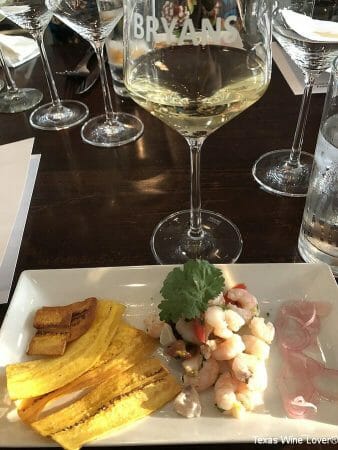 “In one of my early wine training experiences in California, I met an old Mexican who believed that ‘aire y sol’ – air and sun – were the two most essential things for wine,” Rivenburgh explained.

“I decided that every year I would take the grapes from one of the outstanding Texas growers and put those grapes in the Aire y Sol bottling,” he continued. “Although their name is not on the label, this 2018 Viognier honors the Bingham Family Vineyards on the Texas High Plains.”

The second course of Shaved Broccoli Salad with roasted poblano avocado dressing and cornbread croutons showcased a non-vintage Piquette wine made in a “natural” style with Petite Syrah and Tannat grapes from Newsom Vineyards in the Texas High Plains (THP).

“Because I am a ‘waste not, want not’ kind of guy, this 6.5% alcohol wine was produced as a secondary fermentation of grape pumice,” Rivenburgh said. “Natural wines are now super fashionable and this one is made in the ‘Piquette’ style known as ‘lora’ in ancient Greek and Roman times where it was used as a sociological control for workers since its low alcohol encouraged post-lunch productivity rather than an alcohol-induced stupor.” 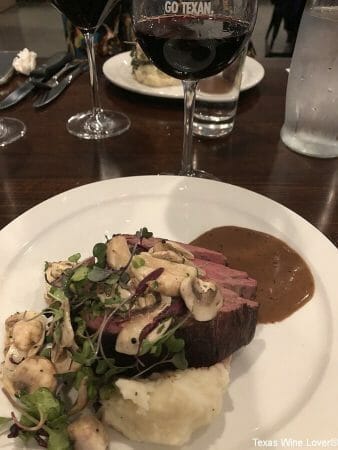 The winemaker known as “the Johnny Appleseed of Tannat” naturally featured his 2017 Tannat from the Texas Hill Country’s Rustic Spur Vineyard. He noted that the grapes for this “biblical wine” are tremendously consistent year to year so that “I don’t have to mess with it!” The Tannat was paired with a Smoked Coffee & Cocoa Rubbed Beef Tenderloin accompanied by a salad of button mushrooms and micro greens, mashed potatoes, and an au poivre sauce. 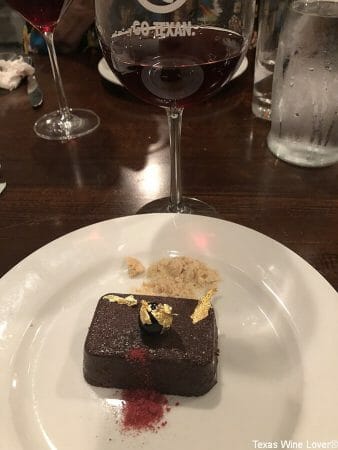 A 2017 Tempranillo (also from Newsom Vineyards), that will be released during Texas Wine Month in October, was served as a “stand-alone bonus” before dessert. That final course was termed “The Last Chocolate Bar.” Dressed in gold leaf and topped by a drunken cherry, it was accompanied by brown butter cookie crumbles, and was paired with a 2014 Rivenburgh Wine Mourvèdre from Reddy Vineyards in the THP.

While winemaker dinners and tasting room visits are frequent opportunities throughout Texas, the focus that Bryan Gillenwater is placing on the Texas wine industry with his many events at Bryans on 290 is a special reason to stop at 300 E. Main in Johnson City to enjoy Texas Food & Wine. Celebrate October’s Texas Wine Month at Bryans on 290!