School may be starting back up, but summer lingers here in Texas. People are still headed to float rivers, boat at the lake, or spend the day at the beach. Water recreation and bottles of wine do not mix, so many turn to canned wines. Before Texas wineries got in the canned wine game, California winemakers already experimented with the new approach. One of the brands known for quality canned wines is Porch Pounder. Their wines have spread throughout the market and are finding a place here in Texas.

Recently, they sent Texas Wine Lover a four pack of their wines—a red blend, a rosé, a Chardonnay, and a Moscato. I am not the first to open a canned wine, so I decided to give them a shot. I received a small box with the four cans carefully packed inside. The packaging kept the cans intact and safe; however, without anything to keep them cool, they were warm upon an arrival. I was worried about how they would turn out, so I put them in the fridge to cool them down and rest before opening them up. Luckily, they showed no adverse signs. 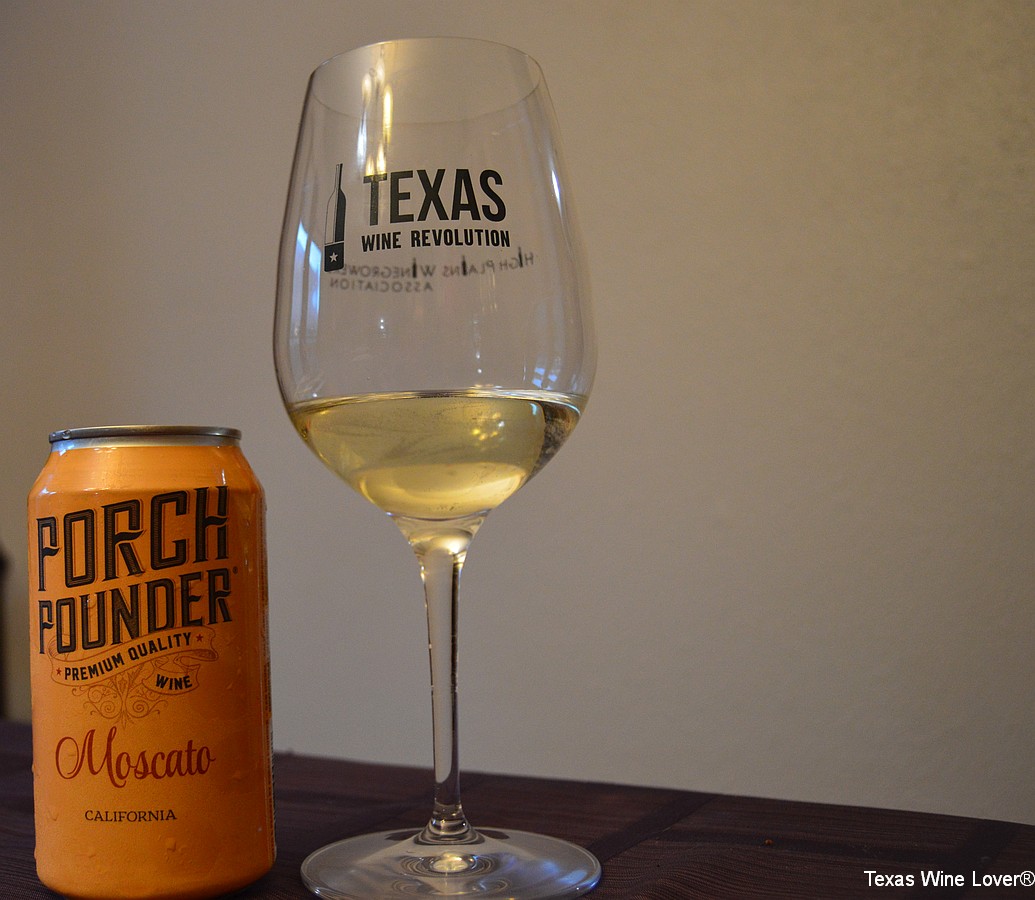 I decided to open them up when I had friends come over—one of two groups I have spent time with during the pandemic. They ranged in experience. They all drank wine and knew what they liked, but some had little knowledge, and some had more. Also, they are all part of one of the main demographics canned wines are aimed towards.

Before we started tasting, I got them all at more optimal temperatures. Then, we tasted each one, one at a time. We took our time with each, allowing them to get some air. We tasted them right out of the can and after a short while. We used a glass for all tastings and had some interesting results.

We started with the Chardonnay. It was easy to drink and simple. It seems like fermentation was done in tank and the wine never touched oak. That left it with light citrus and smooth stone fruit, with honeysuckle, to come through. Upon first taste, it had some noticeable minerality that seemed not totally in line with the rest, which we thought was due to the can. As we waited and sipped, the more obvious mineral notes softened and blended better. In the end, we decided it was a good wine for sitting outside in the Texas heat but not a regularly wine to drink.

We moved on to the rosé. It mainly tasted of melon, at first watermelon, but later, we decided it was more a mix of honeydew and strawberry. It was dry with light minerality—even from the start. It was a definite crowd pleaser. Easy to drink and nice, we all decided we would drink the wine on its own but agreed it was best paired with a hot Texas day. The wine did not list the grapes in it. On their site, they listed Pinot Noir, Grenache, Syrah, and Sangiovese. 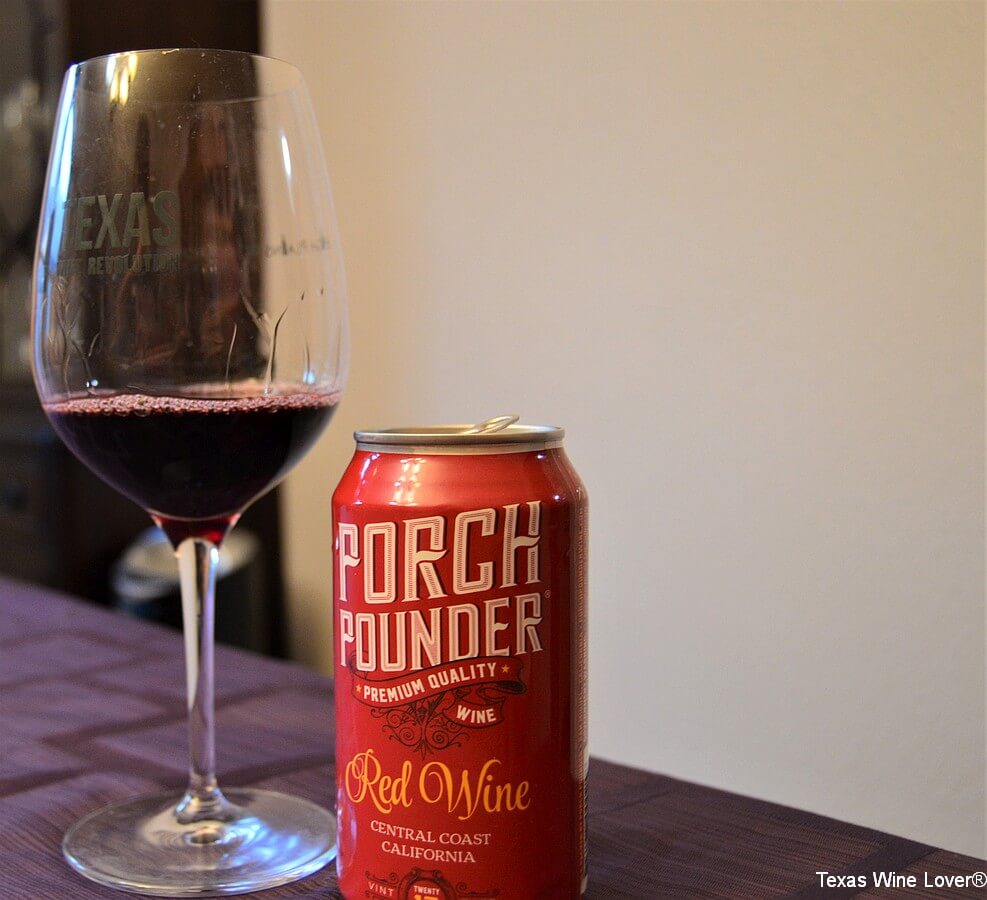 We moved on to the red blend, which was the group crowd pleaser. It was mellow and welcoming. The red fruits had some richness. To those of us more familiar with winemaking, we decided it tasted more like it was tank fermented, or even concrete; the tannins were supple and subtle. It had some complexity, making it a wine good for food and on its own. We did a quick experiment, making a Kalimoxto with it (adding Coke), and found it super refreshing and pleasing. Again, no list of wines on the can, but the site said it was a Pinot Noir blend.

We ended with the Moscato, which had a restrained sweetness and lots of pineapple and similar fruit notes. We found it drinkable, but definitely not a go-to. The sweetness intrigued us, so we started doing some mixing. We found it paired amazingly well with rum, especially Texas rum. The richer citrus notes and supple sweetness blended into a really nice cocktail.

A few days later, I noticed the wines at my local H-E-B. I found their fifth wine, a Brut Rosé. Just before sitting to write, I opened it up to give it a try. It had a strong mineral and limestone nose. As I drank, I picked up under-ripe strawberry and raspberry notes with a strong acidity and minerality. The finish weakened the more nuanced fruit flavors at first. Over time, though, they both cooled down and let the fruit come through. The balance was quite nice. Honestly, I found this the best of the bunch, and just kept drinking it. It is a blend of Grenache, Syrah, Pinot Grigio, and Viognier; it is also the only one clearly carbonated. Too bad it was not part of my tasting pack. 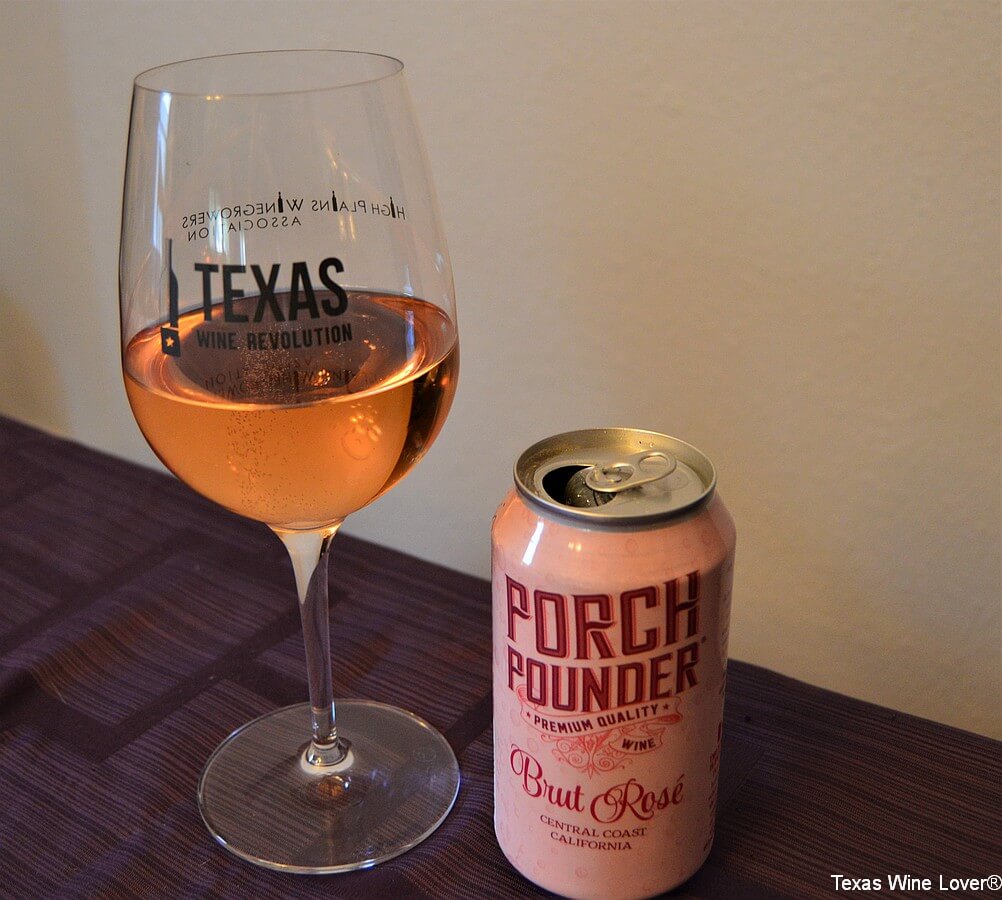 Porch Pounder wines are part of the SLO Brew Company along with beer, cocktails, and whiskey. The grapes all came from the Central Coast, and the winemakers are focused on making premium quality wines. The wines varied in quality—the red and brut rosé being the standouts—but all make a definite Porch Pounder for a hot Texas day. In Texas, you can find them in the canned section of the wine department at your local H-E-B.