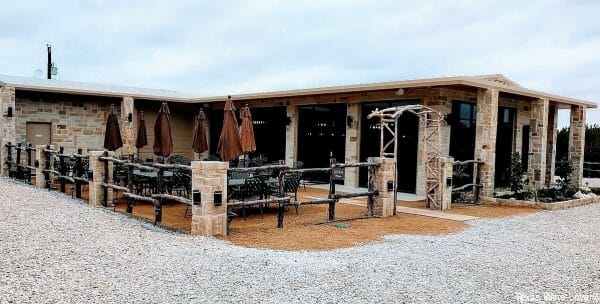 It was just my luck that the day I picked to visit a new winery with amazing views, Dove Ridge Winery in Weatherford, it was a cold, windy, and rainy day. Despite the not so pleasant weather, it turned out to be a great trip and well worth the 300 round trip miles and not getting home until after 10:00 p.m.

As I pulled into the drive, to the right was a small vineyard and straight ahead was the tasting room flanked with more vineyard to the right. It was a beautiful stone building with a tin roof, a lot of windows for enjoying the vineyard views, and a nice outside seating area with picnic tables and umbrellas that could be opened for shade. The tasting room was a light, airy combination of farmhouse chic and industrial with all of the wood and metal accents. There were several four and six-seater tables along with a few chairs at the tasting bar. 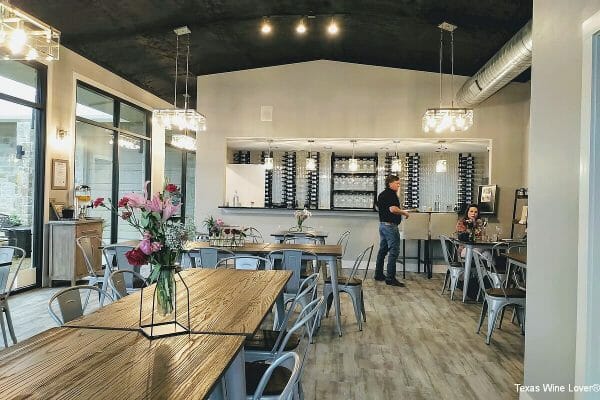 When I arrived, there was a large group sitting at a couple of tables in the front of the tasting room, so I grabbed a seat at the tasting bar and immediately pulled out my notepad as I was ready to taste some wine after my two-hour drive. I was maybe one or two wines into my tasting when I was greeted by Patti Bush and shortly thereafter Joey Benefiel. Dove Ridge Winery is a family business, which I love, being co-owned by Joey, his wife Janan Benefiel, and his sister Patti Bush. Their winemaker is Forrest Benefiel, the son of Joey and Janan.

I had the pleasure of being accompanied by Joey for the day, who was happy to share the story of how the vineyard, event center, and winery came to be as well as giving me the grand tour. Joey explained that he and Janan had always liked wine, but his passion grew through his years of making wine using winemaking kits and visiting wineries and vineyards. He notably mentioned that he was inspired by some of what LightCatcher Winery, which has since closed, had done. In January 2014, their began their journey in the Texas wine industry by purchasing 56 acres of land situated along Tucker Road in Weatherford. Realizing the picturesque views seen from a hilltop, where on a clear day downtown Fort Worth can be seen, they knew they had the perfect place for an accompaniment to the winery and vineyard…an event center. The 56 acres had not been developed, so all of Dove Ridge was literally built from the ground up. After seeing everything they have done, I can only imagine the planning that went into deciding where to clear the brush so roads could be carved, vines could be planted, and the winery could be built. Where to build the event center was obvious based upon the amazing hilltop views.

The original vineyard consisting of 500 vines, which is to the right as you drive onto the property, was planted in late Spring 2014. As of February 2020, they had a total of five acres and 5,000 vines planted. Current varietals planted are Tempranillo, Sangiovese, Petite Sirah, Grenache, Roussanne, and Vermentino. They have plans to plant another 2,000 vines in the spring consisting of Piquepoul Blanc and Dolcetto, one of my favorites, which will expand the planted acreage to around nine acres. Dove Ridge Winery is moving towards being 100% estate, but in the meantime, they source some grapes from Reddy Vineyards in the Texas High Plains. In 2018, they harvested close to five tons of grapes and purchased three tons from Reddy Vineyards. In 2019, they harvested 13 tons of grapes and purchased 12 tons from Reddy Vineyard bottling around 470 cases of wine. Current projections are to bottle around 1,600 cases in 2020. As one could imagine, expansion of the production area obviously had to happen at a much more rapid pace than originally anticipated, which is not necessarily a bad thing, so stainless steel tanks are nestled together as further plans for expansion are in the works.

In visiting with Forrest, it is evident that he has a passion for winemaking and the science behind it. Forrest majored in biochemistry in college and learned the art of blending wines from Les Constable, one of the true pioneers in the Texas wine industry. Seeing such passion and excitement from young winemakers gives assurance that the future of Texas winemaking is in good hands. 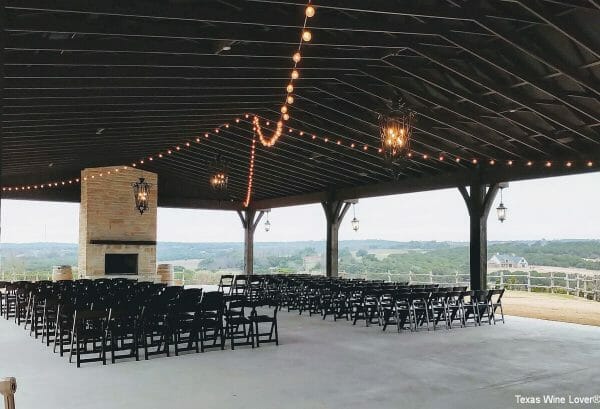 This article’s primary focus is on the vineyard and winery, but I will briefly mention the event center which is run by Janan. The event center itself and the views surrounding it are absolutely breathtaking! There are panoramic views of the vineyard, hillsides, and downtown Fort Worth. There are options for hosting events and weddings both inside and outside, none of which disappoint. The event center opened in March 2017 and held its first wedding on April 1, 2017. In 2017, they held 42 weddings, 86 weddings in 2018, and 110 weddings in 2019. They have also held numerous events over the years. 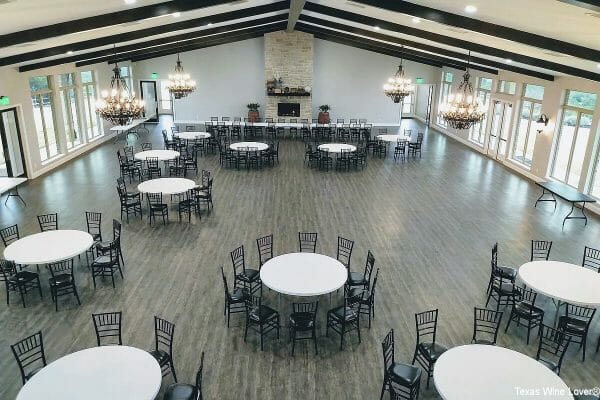 There is also some undeveloped land between the winery and event center where they plan on building some cabins, so patrons can stay the night after spending the day enjoying wine and/or attending an event. 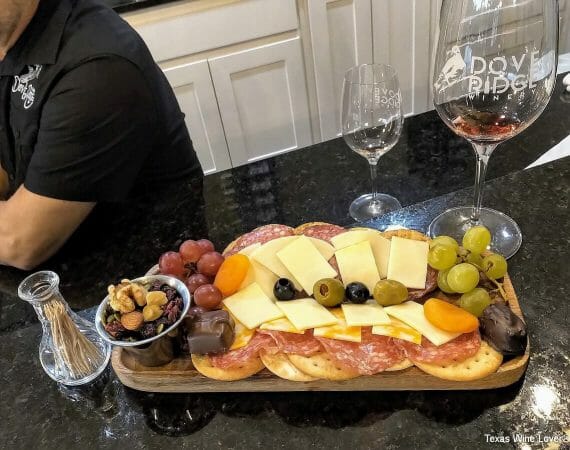 The winery opened in October 2019 and currently offers 11 different wines. They offer a preset tasting of five wines for a fee and sell wine by the glass or bottle. They also offer a really nice meat and cheese tray. With spending 7 to 8 hours there, I was lucky enough to sample almost all of their wines some of which are soon to be released:

I left with a bottle of Texas High Plains Sangiovese, Roussanne, and Petite Sirah. 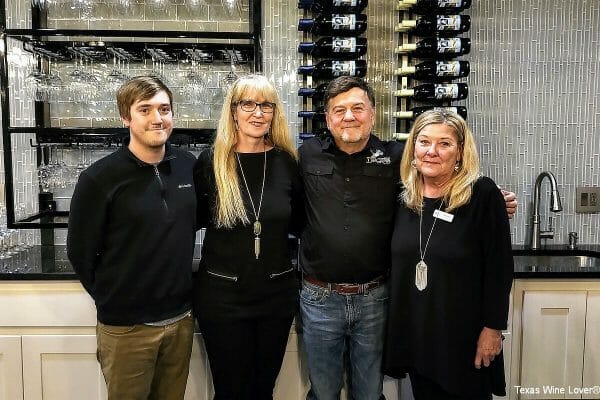 Janan joined us for the last couple of hours of my visit and both continued to graciously answer my many questions, staying well past closing, and just having really nice conversation. I cannot express my gratitude to the entire family for their hospitality and time. I look forward to the day when I can make it back out to Dove Ridge Winery, but hopefully next time the weather will cooperate.

If you enjoy wine and romantic moments, you’ll enjoy these marriage proposal stories.

Looking for the perfect reception spot? Check out FarmResort Winery too.