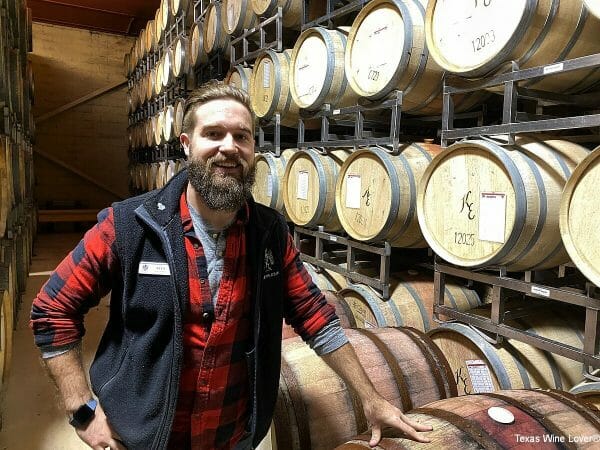 I took a recent trip to Kiepersol located in Tyler, Texas. If you have not yet been to Kiepersol, they have a distillery, a winery, restaurant, lodging, and so much more to offer guests. Upon arriving at the destination, I chose to visit the distillery first. They have tastings of their spirits as either neat or in a cocktail. The current spirits being offered are vodka, rum, and bourbon. I couldn’t decide what to order so I did a tasting of all. There are two different types of rum and bourbon, so that was five total offerings. It was a great start to my visit.

A stop in the winery tasting room was required next where I sampled some of the new wines. I am always astonished at the number of varietal wines made from the estate winery. If you are not aware, an estate winery means all the grapes they use in their wines come from their estate vineyard. East Texas is not supposed to be able to grow varietal grapes like Merlot, Syrah, and Cabernet Sauvignon, but then again, no winery has had a founder and farmer like Pierre de Wet. The estate vineyard was hand planted in 1998 and 1999, and today incorporates 63 acres of vineyards. 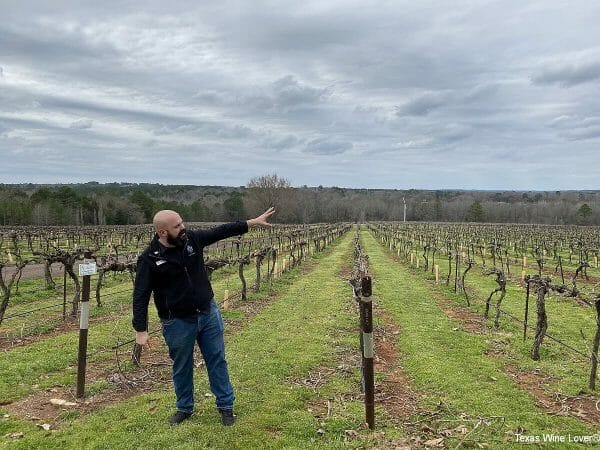 When you are at Kiepersol, be sure to catch a tour of the facility. At the start of the tour, the group is given a very extensive history of the business to help people become more familiar with what they are about to see. One of the things learned was that Kiepersol was the 34th bonded winery in Texas in 1998. First stop on the tour is the distillery where we learned about the different spirits produced. Leaving the distillery, you can see the new addition to the grounds which is the Grand Room. It is a large event space overlooking the vineyards of Kiepersol. The Grand Room can host up to 200 guests and ready to host weddings and other large events. 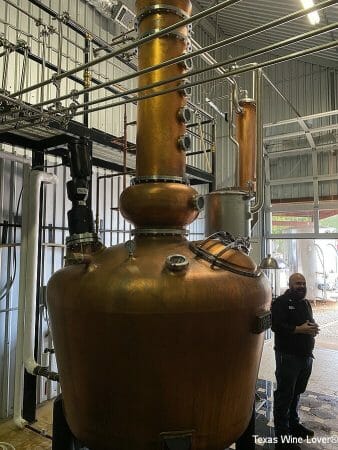 Upon arriving to the winery production area, you walk through a large room with many stainless-steel tanks. Descending a staircase, you then arrive at an overlook of the barrel room housing 658 barrels. The end of the tour is in Salt, yet another extension of the winery with tiered seating overlooking a professional kitchen. It made the perfect location for a tasting of wines included in the tour. 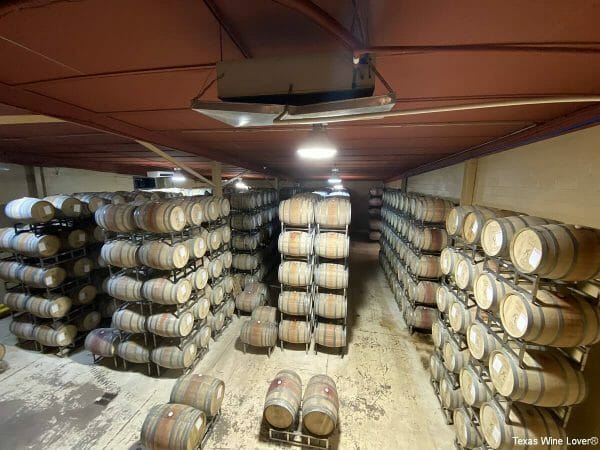 After the tour, I had the opportunity meet the winemaker behind the wines we had tasted, Alex Lee. We sat down and covered a number of items that are commonly asked to Texas winemakers in addition to other topics.

What did you do before becoming a winemaker (if anything)?

“I did mostly food and wine service right through Kiepersol actually. Seven years ago, I was a server over at our restaurant. While I was there, I fell in love with the wine side of things and got an opportunity to run the tasting room. I wanted to be a little more hands on with it and I got an opportunity to work as a cellar hand here first, worked my way up to assistant winemaker, and then got the opportunity to head up the 2019 harvest as the winemaker.”

What first attracted you to winemaking?

“The depth of it. I remember when I first started at the restaurant seven years ago, I was 21 years old just getting into alcohol in general, and I couldn’t tell you the difference between Cabernet and cabaret. It was just red wine, white wine, and it’s all kind of the same thing. As part of the job, I had to learn what went into wine. At first it was really intimidating, but then I had a kind of epiphany moment that the intimidation isn’t really the appeal of it, the appeal of it is how it’s not really defined. The definition part of it comes from stuff like terroir, sense of place, and artistic expression within those things. So, I latched on to the appeal of that. You couldn’t actually learn everything about wine, but you can always continue to learn. That seemed really exclusive to wine, and there’s not a lot of things outside of wine that you can really have that type of expression to it. I found that very, very appealing.”

What is the toughest challenge about being a winemaker in Texas?

“In Texas, perception. It’s very young as a region when you compare it to France and especially old world, and even California. It’s still very young compared to those places, so we’ve had people who come in and hear Texas wine, and they still haven’t grasped the quality side of that. We’ve even had some people come around here and ask, “Who’s your biggest competition?” I tell them it’s actually perception. I tell them to go see those wineries and they’re wonderful winemakers. We’re not here to put them down, because if we’re putting them down, we’re putting all the region down. So, for us, it’s just the perception. The only way we can correct that is to continue to just make the wine the best way we can and let the wine speak for itself.”

What is your favorite food and wine pairing?

“Not so much food or wine, but the memories it can create from having both of those together. I won’t forget having Moët & Chandon at my wedding with the wedding cake, and those aren’t always typical pairings. Those memories are more valuable to me than having a massively expensive bottle of wine next to something you just have to have next to it. The moments having food and wine together are a lot more memorable for me.” 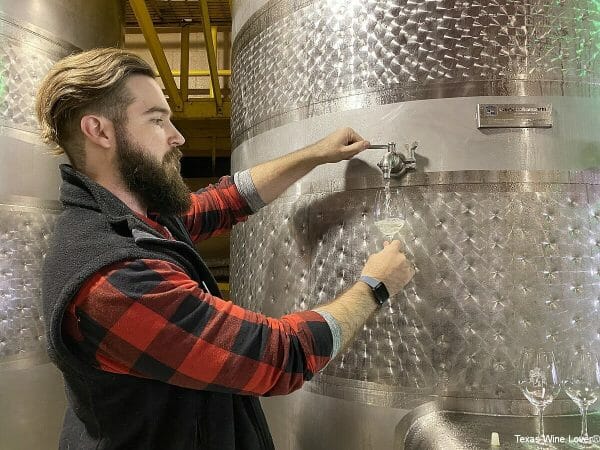 If you didn’t make wine, what would you do?

“Hopefully something engaging and active. I tried my hand at writing in the past. But just sitting at a desk all day is not really my thing. Wine luckily has so many different parts into it and all of them are very active. It’s not just winemaking; you have fermentation, vineyard management, physics, biochemistry, and chemistry in itself. You have just the activity side of moving these things around. All of those things are engaging, so something along those lines.”

What is the most common question you are asked as a winemaker?

“What is the day in the life of a winemaker? This of course depends on the season, but other than harvest which is hard getting down to it in July, August, and a little bit of September, it’s about 50% cleaning, 40% bottling, 9% testing, and about 1% winemaking. Making sure everything is clean and safe is usually the top priority. Every once in a while, I get to the testing and everything.”

After a long day in the winery or vineyard, what do you do?

“Those long harvest days you try to get every bit of sleep that you can get when you’re working 16 hours a day. But other than harvest, it’s usually some time in the gym or try to go on a walk with the wife and the dogs.”

What’s the greatest part about being a winemaker?

“I experienced this recently. I was helping out at the restaurant, and the bartender was talking to some guests about the wine. I overheard the guests raving about the wine and that unbiased review or critique was really nice. Just that feeling I made that moment or memory for these people, and I didn’t have to prompt them or they’re not saying that just to make me feel better; in that they’re genuinely having a good moment. That’s what really makes it for me.”

Please tell us about your winemaking style here at Kiepersol.

“This is something we’re really excited about. We’ve had it for a long time and we’re continuing it, but every time we talk about it or try to define it more, it gets that much more exciting. We focus on making a non-aggressive wine, a non-bitter wine, one that you don’t have to fight through to enjoy, but it’s still classically whatever you’re after. At the same time, we’re getting an opportunity to express our terroir and sense of place here since we are both a winery and a vineyard coming from the same location. So stylistically, we try to limit astringency, not so much tannin, we still like our tannin structure, but that can lead to a bitterness usually, but that also doesn’t mean loading it up with a bunch of sugar or something like that to hide it. There are a lot of subtle techniques that we try to employ that are sometimes harder to do, but I think that makes a better wine at the end of it, since we’re not just trying to cover up some of the parts that are harder to work with instead of employing the best we can and using the tools we have available to express the grapes the best way we can.”

“It is a double edge sword, mostly good though. We have a lot of creative power and also the blessing we have of having an established estate. Since we’re dealing with our own wine and our own grapes, we don’t have to try to make wines like they do elsewhere. We’re taking our grapes that we know are ours that we grew ourselves, and just let them express themselves the best way we can. That doesn’t always mean that you’re going to have the California Cab, and in fact, a lot of the times we hope you don’t have a California Cab. We hope you have a Texas, East Texas, or Kiepersol Cabernet when you have it, but still enjoy it for the Cabernet it still is. On the other side of it is whenever we’re making wine, if we’re getting 100 tons, we’re getting 100 tons. We can’t pick and choose we need 10 tons of this, we need 12 tons of that, and I’ll make exactly how much we want. No, we’re getting 100 tons. We can sell off some of it, but we also have the distillery right next door. So, if we have a lot of grapes that aren’t going to turn into wine for us, we’ll still ferment it and we use it for the vodka. So, we can help to lessen the harder side of the estate wine with the distillery side.”

I think Texas wine is still growing exponentially in some ways and I’m really excited to be a part of that.