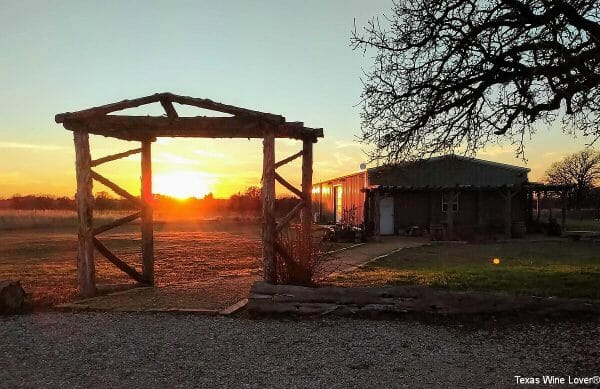 It’s no secret that Marker Cellars is one of our favorite wineries and it just so happens to be located in one of our favorite areas I refer to as Texoma/Red River. Technically, it is the start of the Red River Valley and is the Texoma AVA. It is the third winery we went to when we decided to start visiting Texas wineries around five years ago and has since been a “must” on our itinerary when we head northeast. Aside from our love of their wines, owners Mark and Becky Rogers and Director of Marketing, Margaret Lange, are true gems. The saying is true at Marker Cellars…enter a stranger, leave as a friend!

It is hard for me to believe that after five years of visiting Marker Cellars at least a couple of times a year, we have not been able to attend a single event there. On January 25th, we rectified that when we attended their first ever Wine and Cheese pairing event. This was the perfect first event as it also included a sneak peek of three yet to be released wines. 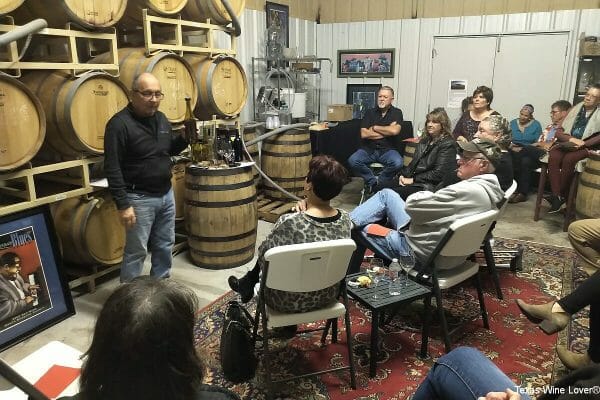 The first pairing was 2018 Viognier and Brie de Nangis cheese from France. The creamy, mild butter flavor of the brie cheese enhanced, and somewhat mellowed, the crisp acidity of the Viognier.

The second pairing and first sneak peek was a barrel tasting of non-vintage Bourbon Barrel Blend and Saporadel Piave from Italy, a blend of parmesan and gouda. For this Bourbon Barrel Blend, Mark Rogers took 53 gallons of his latest release of Texas Blend (25% equal parts Cabernet Sauvignon, Primitivo, Merlot, and Tempranillo) and placed it in a wheat bourbon barrel to age for 60 days. Not usually a fan of parmesan, the combination of parmesan and gouda seemed to be the perfect pairing for this wine as they both had a creamy, slightly dry, earthiness to them. 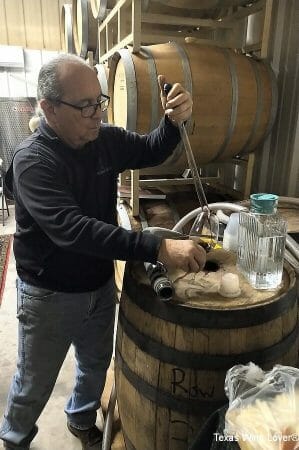 The third pairing was 2017 Legend and Truffle Gold, a Texas white cheddar. This vintage of Legend, made from Primitivo grapes, was finished in a stainless-steel tank with French oak staves for around seven months. To me, Legend is the most tannic wine at Marker Cellars being full bodied and having a dry finish.

The fourth pairing and second sneak peek was 2019 Syrah and Lamb Chopper, a sheep’s milk cheese from Holland. This vintage of Syrah, using grapes from the Texas High Plains, is also being finished in a stainless-steel tank with French Oak staves. This one was sampled from the tank and was our favorite wine of the evening. Big and bold, with a hint of spice and smoke, yet not too dry with a nice finish.

The fifth pairing and third sneak peek was non-vintage Lightning Cab, which is a bourbon barrel aged Cabernet Sauvignon, and XO Gouda, a cow’s milk cheese aged two years in caves in Holland. I remember when Marker Cellars released their first Lightning Cab, they sold 27 cases within two days, bottled another two barrels, and got another three barrels aging right away. While the first vintage was aging, we made pretty frequent trips to the winery and were lucky enough to get to taste its progression. I can’t help but laugh when I think about our very first tasting; it knocked us off our feet! Tasting the finished product, we were shocked at how much it had mellowed over the months and turned into a really nice Cab with a little kick. There have been a few vintages of Lightning Cab since and each has been a little different partly because the type of bourbon barrels has been different. This vintage does not disappoint and paired perfectly with the XO Gouda, which is described as having flavors of whiskey among other things. 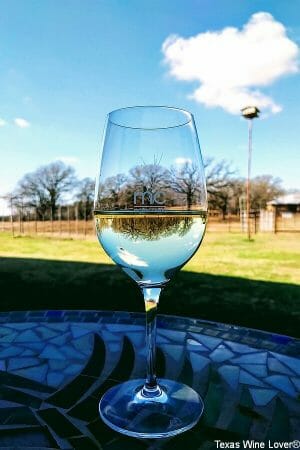 The day after the event we went back to the winery to visit with Mark Rogers about the changes the winery has undergone since our first visit. Looking back at the article from 2014, there have been some significant changes over the past six years. Still using 100% Texas grapes, wine production has increased from 850 cases in 2014 to around 1500 cases in 2019. An arbor was added to the front of the building where the main entrance to the tasting room makes for an inviting welcome. 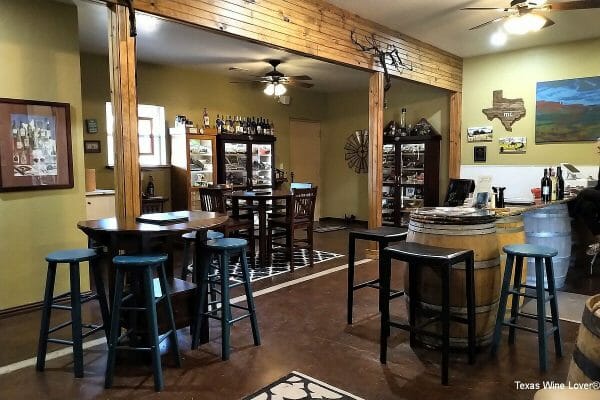 Patrons are still welcomed by winery dogs Vino and Zin, who is featured on label for Zin Tin Tin. A new, much larger production area has been added onto the north side of the building and over Labor Day weekend 2017, the tasting room was expanded to take in the original production area, more than doubling its size. A sizeable covered patio was added to the east side of the building where patrons can enjoy the day drinking wine while taking in the views of the native blue-stem grass, which is depicted in the winery’s logo, and watching the horses graze in the pasture. 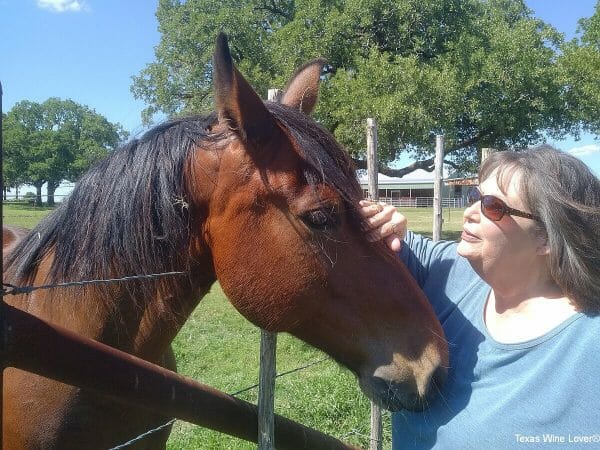 In January 2018, an event center was added providing expanded temperature control seating areas for those hot, and sometimes cold, Texas days. Live entertainment and local food trucks can often be found at the winery. 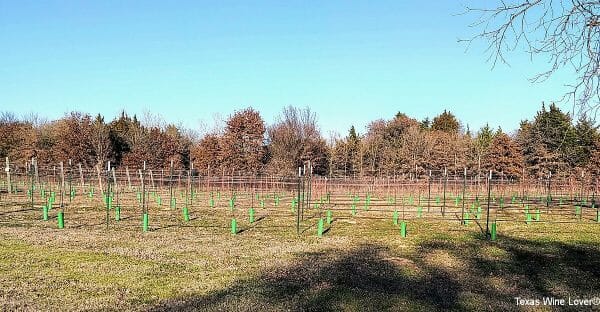 The most recent change occurred in May 2019 with the replanting of the vineyard. In April 2007, one acre of Syrah was planted; however, in 2018, the 11 year old vines were lost to what is believed to be 2,4-D drift. With the help of Travis and Juhree Vaugh, Greg and Lori Stallcup, and their families the acre of Syrah was replaced with one acre of Tempranillo and one acre of Tannat doubling the vineyard’s size. We are looking forward to watching the vines grow and hopefully being able to help, schedule permitting, with the first harvest of the new vineyard. 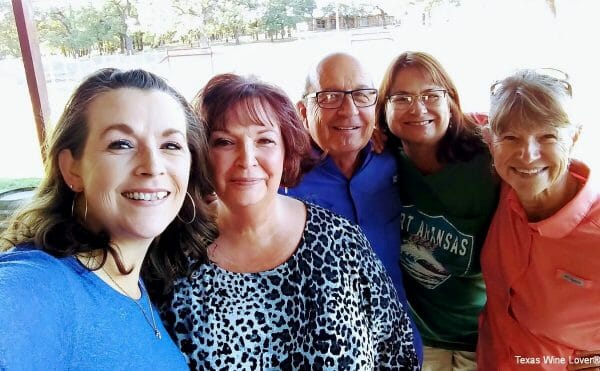 If you are ever in the area of Alvord, Texas, I highly recommend making a trip out to Marker Cellars and tell them I sent you. You will not be disappointed!