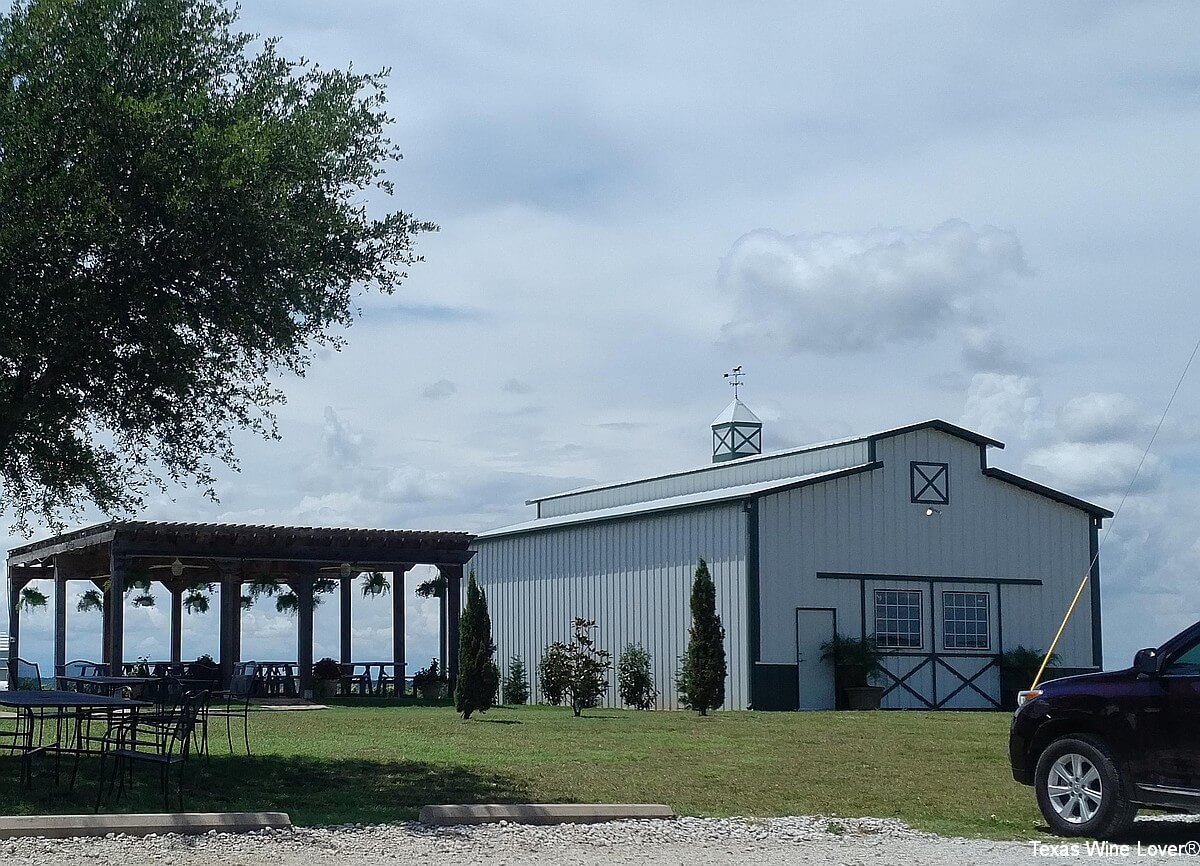 When Blue Ostrich Winery announces a Sneak Peek tasting, I get excited because that always means new great wines are coming! So of course, when they announced their January 11, 2020 Sneak Peek, I immediately booked a hotel and purchased our tickets as soon as they went on sale. Always one to take advantage of a trip back to Texoma, we decided to make a four day trip out of it and head in on Thursday. This would allow us time to visit our other favorite wineries in the area and a few new ones both before and after the event.

Being Texas and never knowing what the weather will do, this trip proved to be quite eventful and left us wondering if we would actually make it to the Sneak Peek. The day before, a line of thunderstorms blew through the area causing us to not only change our plans for what wineries we would visit that day, but to also change hotels as ours lost power. Then Saturday morning, the morning of the event, we awoke to find it had snowed and was sleeting with temperatures forecast to be in the low 30s. Thankfully we were in my husband’s 4-wheel drive truck because Mother Nature was not going to get between us and the Sneak Peek! Luckily the roads were not too bad, except for a couple miles stretch on the main road to Blue Ostrich Winery, so slow and steady got us there without issue.

Previous Sneak Peek events we attended at Blue Ostrich Winery had stations set up throughout the tank and barrel rooms for each wine and food pairing. This format allowed patrons to wander between stations at their own pace, but it was difficult to learn about the wines themselves since patrons were coming and going at different times. In November 2018, we attended a Sneak Peek event that was held in the new barrel room and had seating arrangements set up for each individual group attending. This format we loved as it was a controlled environment allowing everyone the opportunity to learn about the wines and pairings at the same time while leaving time for open conversation between each tasting. 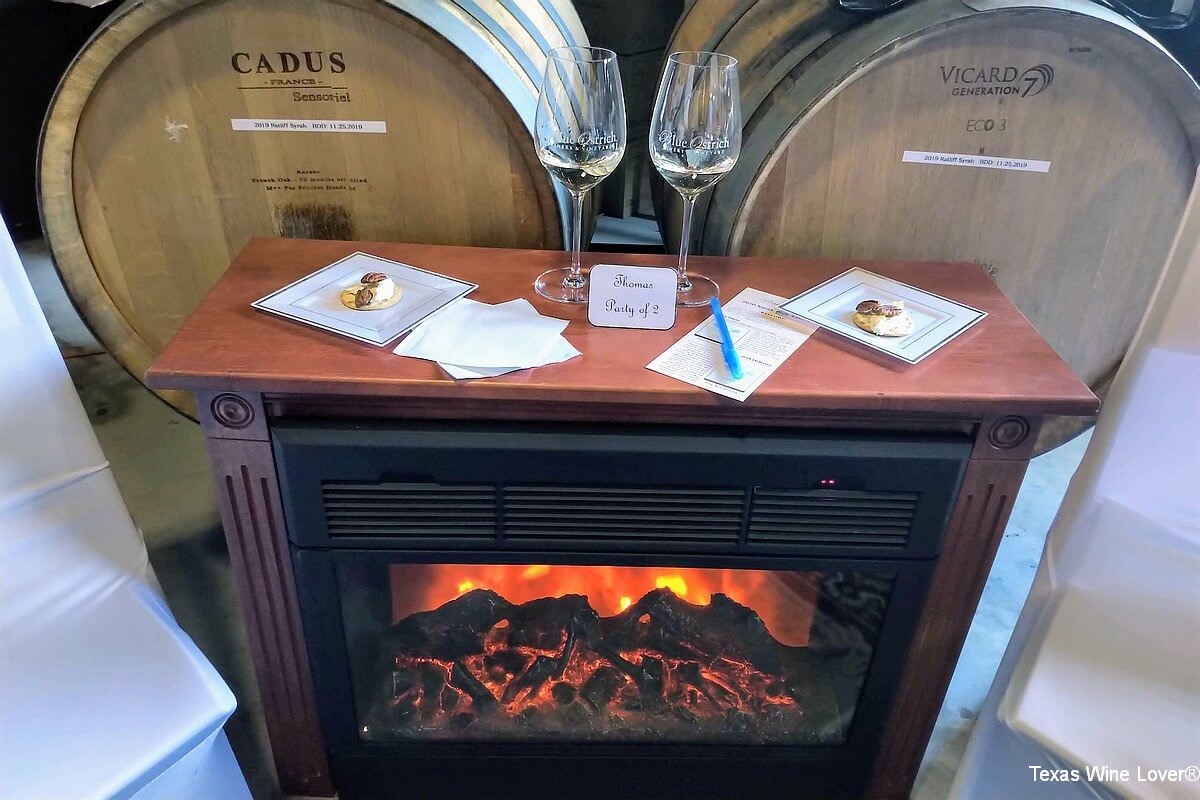 As we entered the barn shaped barrel room, which is located to the right of the main tasting room, we were pleased to see the seated format carry over to this Sneak Peek. We quickly found our seats situated by a faux fireplace heater, which we were glad to see as it was pretty chilly outside. Patrick Whitehead, co-owner and winemaker, was the MC of the event and quickly got us started once everyone was settled in. 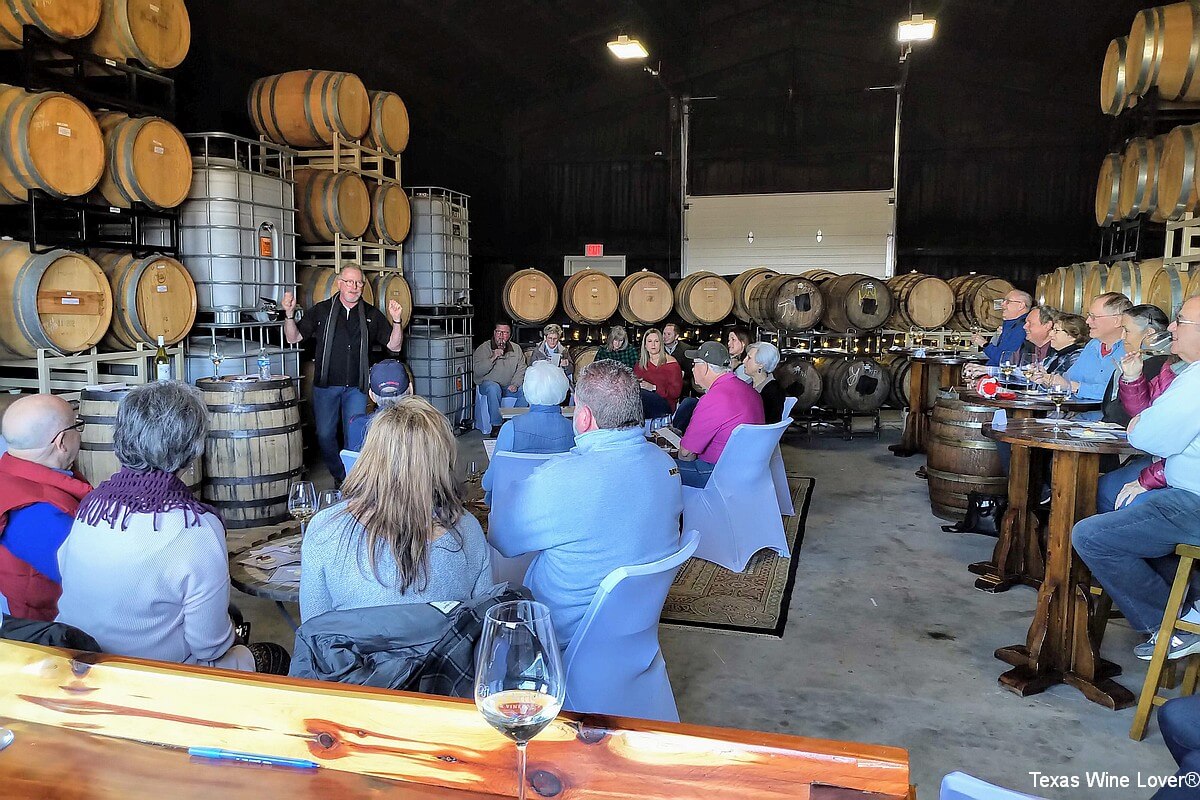 The first tasting was Vin Blanc and it was paired with brie cheese and salted pecans served on a water cracker. Vin Blanc is non-vintage and is a blend of 2017 Viognier and 2018 Orange Muscat with 1.5% residual sugar. To us, the Vin Blanc was more semi-sweet than sweet and was slightly off dry. A nice middle ground between a sweet and a dry white. 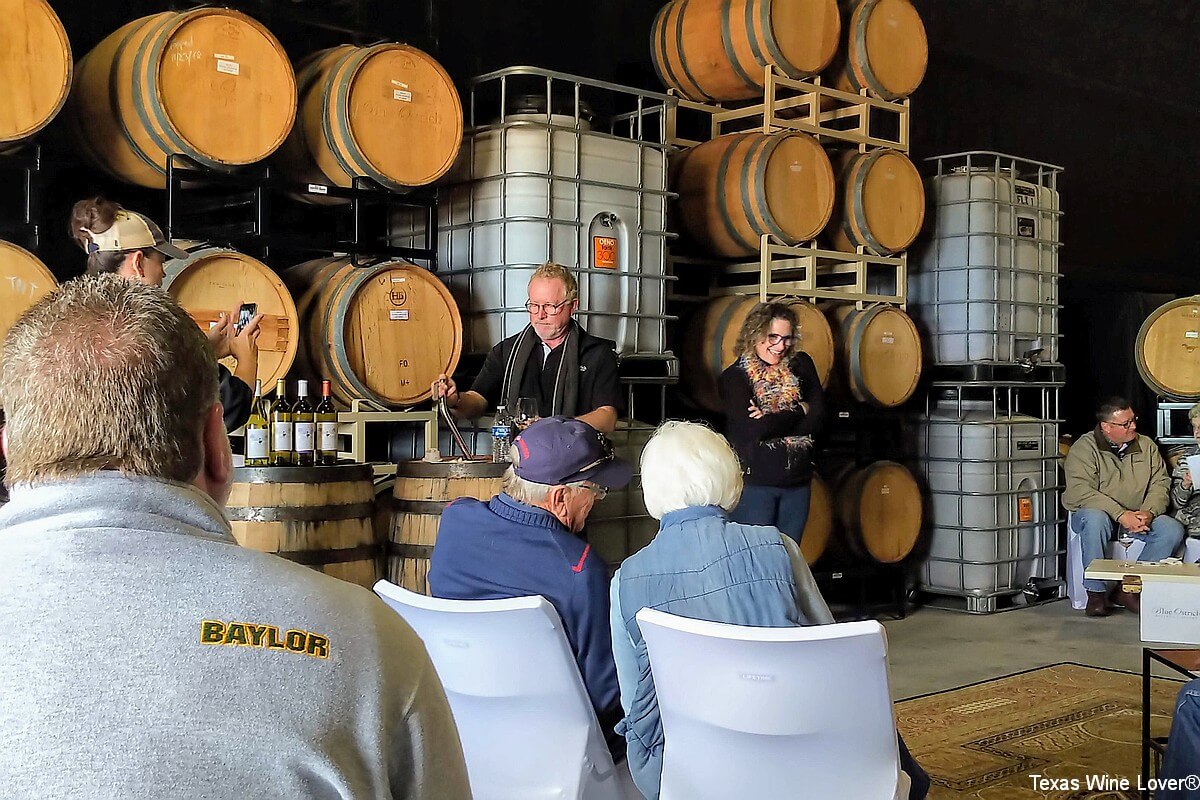 The second tasting was 2018 Dolcetto and it was paired with bar-b-que chicken pizza. The grapes are from the Texas High Plains where they were machine harvested, and they were fermented and stored in flex tanks. This Dolcetto had a slight oaky flavor, which was the result of their using oak staves. Blue Ostrich Winery Dolcettos have always been a favorite of mine and this one definitely did not disappoint.

The third tasting was 2017 Table One and it was paired with a beef and cheese slider. This is the second release of Table One and this vintage is a blend of 60% Syrah, 28% Cabernet Sauvignon, 6% Merlot, and 6% Sangiovese. It was barrel aged in American and French oak for a little over one year then bottled aged for another seven months. Patrick explained that Table One got its name from a time when Blue Ostrich Winery only had the main tasting room, which had the tasting bar and a few barrel tables. As patrons would enter and stop at the first table, the staff would always ask each other, “Who has table one?” Obviously, the Syrah stands out in this one as it was fruit forward, but the little bit of Sangiovese seemed to lighten it up just a bit. Table One is a pleasant, not too dry, red blend. 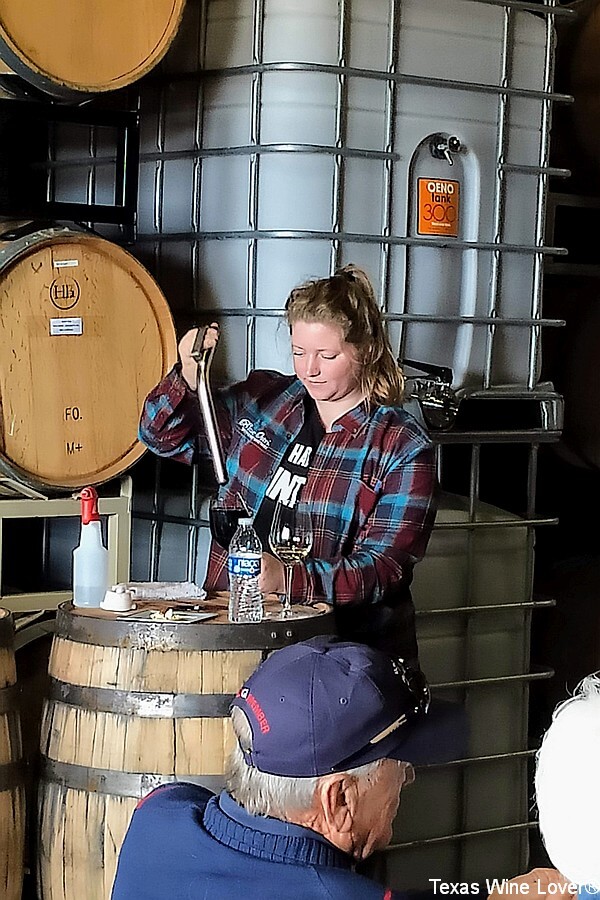 The fourth pairing was 2018 Wise County Syrah with the grapes coming from Ratliff Vineyard, and it was paired with wild boar summer sausage and gouda cheese. Prior to the Sneak Peek we did a tasting and ended it with the current vintage of Syrah for comparison. To us the 2018 Syrah was fruit forward but seemed to be somewhat smoother and a little less dry while retaining the jammy finish we are used to seeing with Syrahs.

The fifth and final pairing was 2018 Six Hearts Bourbon Barrel Cab which we tasted from the barrel, and it was paired with chocolate. What’s not to love about a big, bold Cab aged in a bourbon barrel when it is done right? This one still has a little longer to age in the barrel, but I fully expect it to be the perfect following to their 2017 vintage. 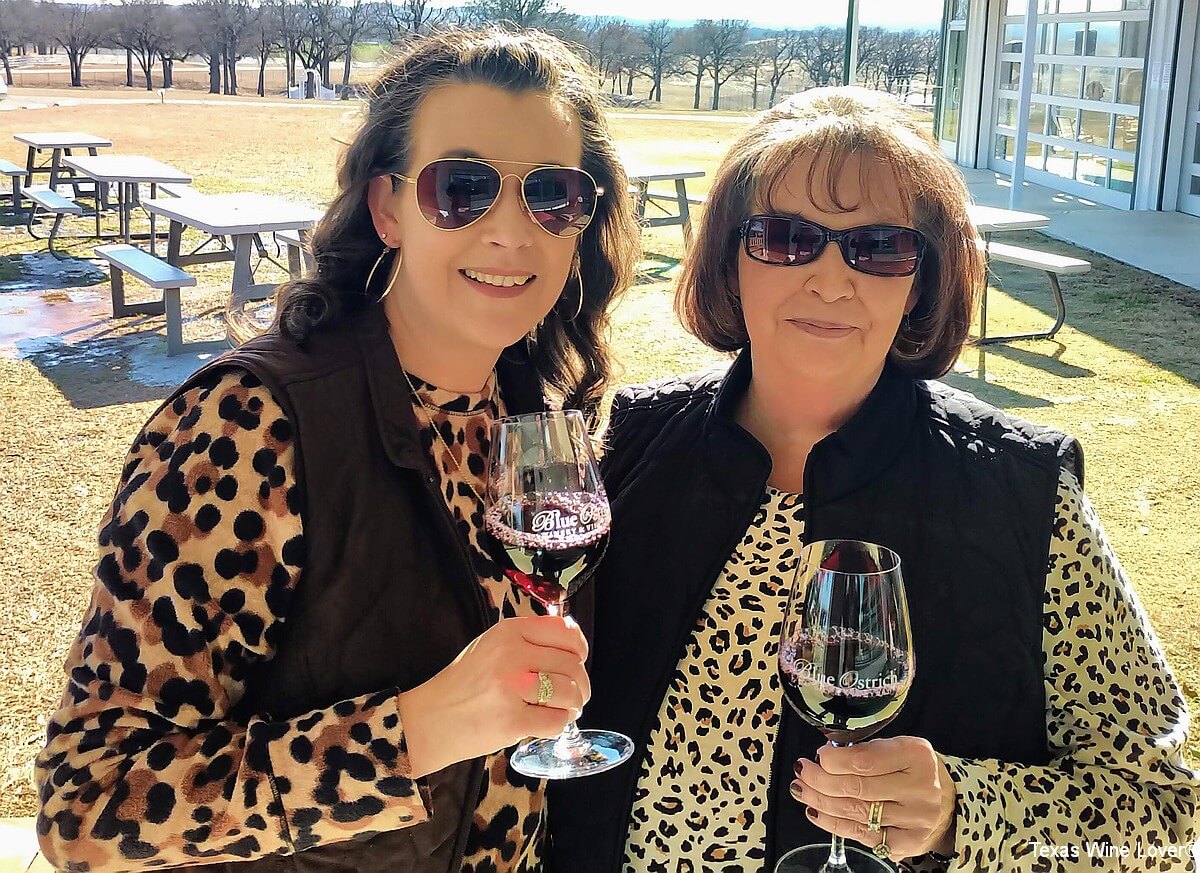 Aside from getting to sample some of the new wines that will be released throughout the year, I love the fact that at the end of the Sneak Peek, everyone in attendance is given the opportunity to purchase the wines sampled at a discounted price. Since the 2018 Bourbon Barrel Cab was a barrel tasting, it was not available for purchase. Not being one to pass up a good deal, we always take advantage of this offer especially since the discount is usually a little more than the standard wine club member discount.

This was another great Sneak Peek and we look forward to the next one! If you have never attended one of Blue Ostrich Winery’s Sneak Peek events and you not only love their wines, but also like to learn about them. I would encourage you to attend a future event.