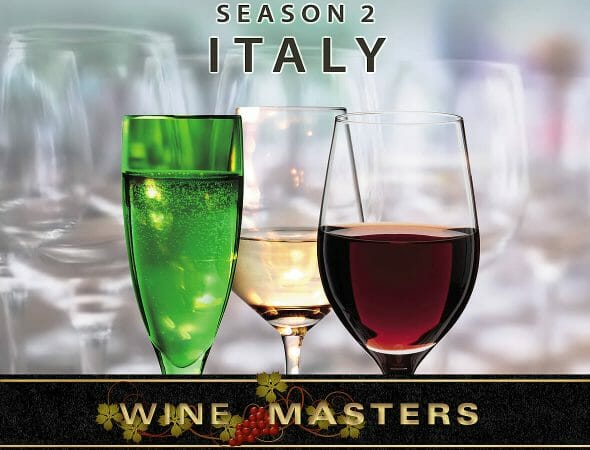 We received access for review and all opinions are our own. Some links are affiliate links meaning at no additional cost to you, this site may get a small commission if you make a purchase.

Previously we had the opportunity to review the first season of the documentary series Wine Masters – France. The five episodes focused on five French winemaking regions and was exceptionally done. After watching the first season, it gave one the desire to visit France. Now comes season two which features five prominent wine regions in Italy. Let’s see how this season does.

Producer Klaas de Jong tackled Italy for the second season and the plan is to have a total of seven seasons. Not unexpected, the second season was similar to the first in the way the story of the different regions was introduced. Masters of Wine Sarah Heller and Richard Hemming spoke about different aspects of the wine along with Italian wine writer Burton Anderson.

The cinematography was gorgeous as before referencing the vineyards, wineries, wines, and people involved. Slow motion video was also included at the right times and seemed to be fewer in number than the first season which is a good thing.

The series is in English and French with subtitles in English, French, German, Portuguese, Spanish, Mandarin, and Russian. Each of the five episodes are 40-45 minutes in length for a total of 3 hours 30 minutes. Season one is available on winemasters.tv, iTunes, Amazon Prime, Google Play, and Vimeo on Demand. On Vimeo, you can now rent an episode for $5.99 for streaming within 48 hours or buy it for $9.99 to stream anytime. You can rent five episodes for $24.99 or buy all five episodes for $39.99. 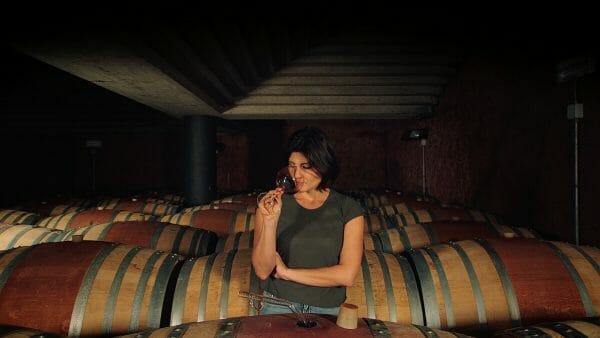 Angelo, the father of the others, joined the company in 1961 which was founded in 1859. He selected the vineyards best for Nebbiolo in the Barbaresco area and was responsible for bottling a single vineyard Barbaresco which at the time was unknown.

Barolo and Barbaresco wines are both made by the black Nebbiolo grapes, and some say Barolo is more masculine and Barbaresco is feminine. Others think it is just the same wine made in two different areas. The Piedmont region is in northwest Italy on the border of France and Switzerland. It has a nice wind with different hillsides which provides the different characteristics of the wines. As Sarah Heller stated, the area has a lot of fog, and “Nebbiolo” is the Italian word for fog.

The Gaja founder had the idea to make Barbaresco more important than Barolo. The winery blended in 10-15% Barbera into the Nebbiolo and that disqualified them from calling the wines Barbaresco. Angelo wanted to bring back the blend with Barbara, but the children decided to put that project on hold and bring back 100% Nebbiolo. 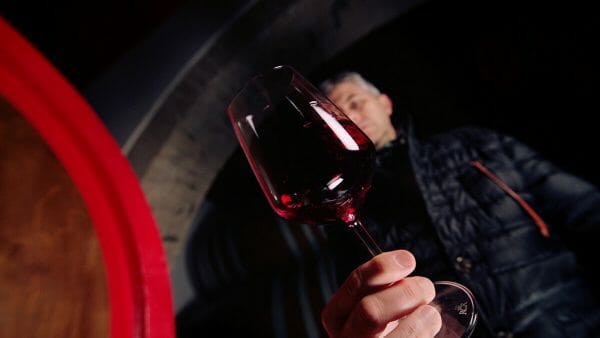 Campania is in the southern part of Italy on the west coast and Mastroberardino is located in Irpinia in the hills of Campania on the mountains. The capital of Campania is Naples, Napoli, but perhaps the most famous city is Pompeii. Because of the climate being unusual, they are the last wine region in Italy to harvest.

There is a large variety of grapes grown in Campania but Aglianico is the most important. On the mountains, they have Fiano, which is the base for the production of Fiano di Avellino DOCG, and the Greco grape for Greco di Tufo, both white grapes. The red grape Aglianico is made for the Taurasi wine.

Piero’s father was Antonio Mastroberardino who many considered to be the patriarch of wine from the Campania region. He focused 99% on Irpinia, but 1% on Pompeii. Because of that, they are producing a wine inside the archeological town of Pompeii. Antonio had a dream to bring life back in Pompeii through the vineyards. All 15 vineyards they have in Pompeii are located where vineyards once were. Each and every plant has been replanted in the same position they were 2,000 years ago. The density in planting was 8,800 plants per hectare. It is a density that appears extremely modern. They wanted to have the urban viticulture at such a high density in order to increase the shade and favor the labor in the rows by the workers.

The winery picks white grapes at the beginning of October and red grapes for the Taurasi mid-November. As seemingly in response to our monthly winemaker profiles, “Winemaking is an art, because you’ll never have the same condition twice in your life.” And Richard Hemming added, “Is wine an art or a science? The boring answer is that it’s both. If you make wine without science, then you need to rely on luck for it to be good.” 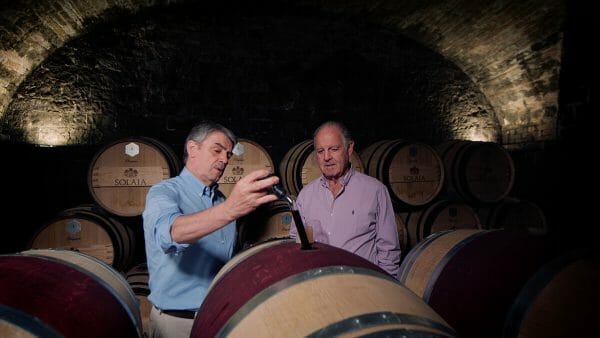 Tuscany is on the west coast of Italy north of Rome and is considered Central Italy. The main grape grown is Sangiovese and three great Sangiovese-based wines found in Tuscany are Chianti Classico, Brunello di Montalcino, and Vino Nobile di Montepulciano. The wines of Chianti Classico tend to be fruitier and the tannins more approachable. The Brunello di Montalcino is made from a clone with smaller barriers and is more powerful. The Vino Nobile is a bit between the two, deeper and sometimes the tannins are a bit more austere.

The Chianti name is an appellation, a Denominazione, so that is a legally defined region. When they talk about Chianti and Chianti Classico, there is a difference. Chianti is a much larger appellation while Chianti Classico is smaller.  Burton Anderson thinks the best Chianti are the ones from the global region Chianti and that you drink three to five years after harvest.

The most important figure in 1966 joining the company was Piero Antinori. He had a vision for some of the wines that caused controversy, but they improved quality. Chianti was usually focused on quantity, and Piero started to change that philosophy. He introduced Cabernet Sauvignon and the barrel and introduced the first Super Tuscan. 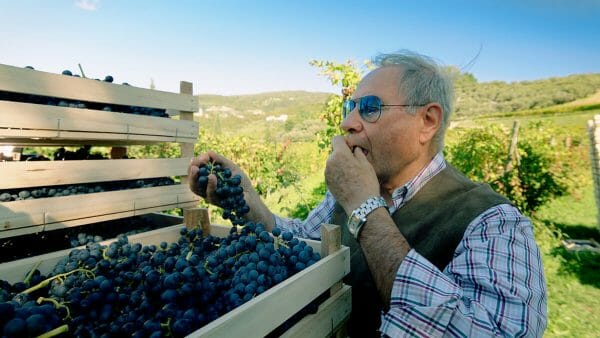 Valpolicella means “valley of many cellars” and the region’s red wines are very diverse from dry Amarone to the richly flavored dry red wine Valpolicella. In Verona, the three top indigenous varieties are Corvina, Rondinella, and Molinara. Those are the three ingredients for all Valpolicella. By themselves, the grapes do not make a nice wine, but the combination of all the three grapes makes for a beautiful wine. Corvina is the core of the wine.

The wines use the same varieties of grapes but use a different technique. Amarone is when you take the same grape varieties from the same region, so it still counts as a Valpolicella, but the Amarone part means that the grapes have been dried out and then fermented into a very concentrated wine. They harvest the grapes and then lay them out on bamboo racks and then leave them to dry naturally. Corvina is especially good at being subject to this process called “appassimento.” After 100-120 days, the berries are softer and there is more skin than juice.

Between Valpolicella and Amarone is Ripasso which is the best of both worlds. Raffaele Boscaini said, “My grandfather had Valpolicella as an everyday wine and Amarone for Christmas and was in need for a wine for the Sundays. So, he invented the Ripasso.”

There is a fourth variety in Valpolicella which is one of the oldest varieties in the world called Oseleta. It is a very small berried grape variety and very thick with nicely perfumed herbalness. 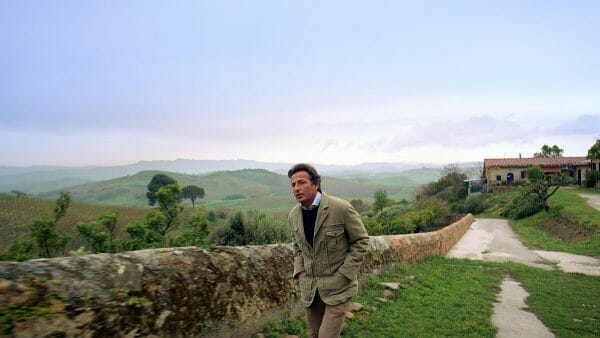 Popular today from Sicily is Nero d’Avola and Grillo. Becoming popular is Nerello Mascalese in Etna. Mount Etna is a volcano and has an explosion nearly every day. Etna provides the altitude to get enough freshness overnight, so the grapes don’t burn off their acidity. Plus, the volcanic soil helps so that everything grown in that part does well, because volcanic soil is considered to have great quality.

The first prestigious Nero d’Avola wine was made here by the noble family Tasca d’Almerita, who included the grandfather of Alberto Tasca. The family first bought the land in 1830 and eight generations of the family have been making wine there.

Nero d’Avola has dark, concentrated, ripe, black fruit flavors, along with high tannins and pretty high acidity as well. It has a greater intensity than you would get in more northern parts of Italy.

One of the winery’s best wines is called Rosso Del Conte and this was the wine that was inspired by Châteauneuf-du-Pape. It is blended with another grape variety called Perricone. Perricone gives it an additional level of tannic structure so that it can age for a long period.

Lucio planted French grapes Cabernet Sauvignon, Chardonnay, Pinot Noir, Sauvignon Blanc, and he didn’t tell anybody he was doing it. When they went abroad with the wine, it was a huge success. With that introduction of international grape varieties, people started to compare Sicily to other territories. So, the first Chardonnay in Sicily started to win a lot of prizes all around the world. Sicily is an underrated wine region, so the wines are a great price value.

Season two of Wine Masters was just as excellent as season one. I am considering visiting Italy next year and this documentary helps me make a decision on where I may want to visit.