It was another great night at the Sip & Swirl in downtown Levelland, Texas. This annual event showcases so many of the great wines grown and bottled on the High Plains. It is a great way for the wines to get their names out there and it is a great way to acquaint yourself with all the varieties available that are grown in West Texas. 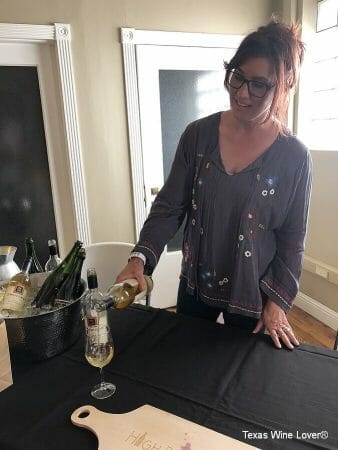 We strolled down the sidewalk on an evening that was surprisingly nice since the day’s temperature had reached the three digits. All the shops on the square in Levelland were open. For those big city folks who just really aren’t sure what a square is, in many of the smaller communities, the downtown businesses are on streets that surround the Courthouse, thus “the square!” Life on the square is usually full of fun and conversation and laughter. In the old days, stories were told while the old men whittled away. Nowadays, there is more of a busyness to it all, but the square is always the heart of small-town living. On the square at the Sip & Swirl was Hannah Johnson playing and singing some wonderful acoustic music. Her voice was soulful and the perfect addition to an evening of strolling and sipping. 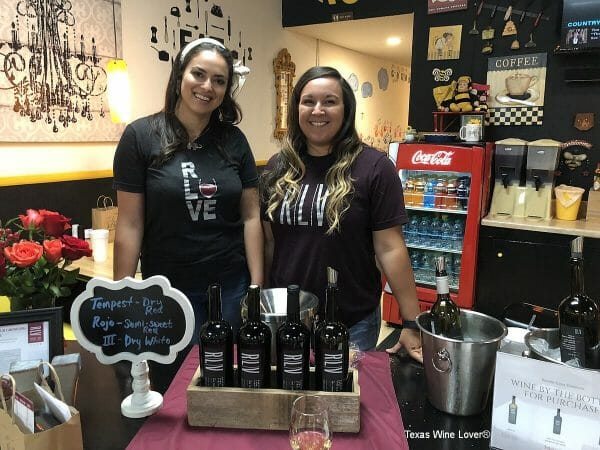 Our next stop was Honeycomb Pie Shoppe where we got “shots” of some wonderful chocolate creme pie to go with wine from Rancho Loma Vineyards, otherwise known as RLV. My taste there was RLV III which went well with the pie sample. They were also serving Rojo and Tempest wines.

At the historic Wallace Theatre, we found activities designed to raise money for the renovations and activities at the Wallace and also the great folks from Farmhouse Vineyards pouring up some of their finest. Nick Seaton’s always smiling face was great to see. I grew up with Nick’s mother, so I tend to claim him as my own! They were pouring Sweeter on the Farm, among others, and it was all wonderful. 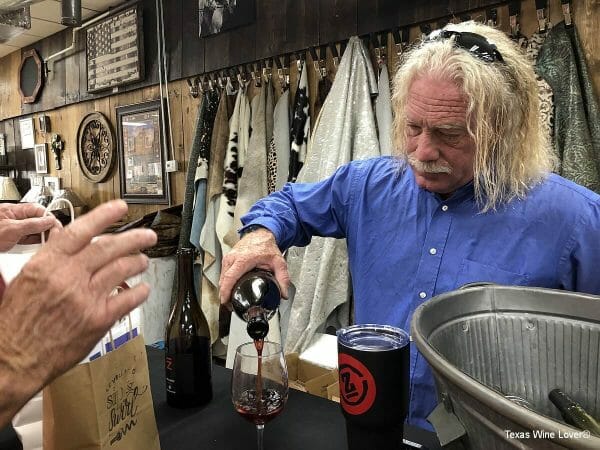 Bar Z Winery was pouring in Our Stuff, which is such a fun place to shop. My companion for the evening enjoyed a Ruby Cab. The wines were poured by winemaker extraordinaire Monty Dixon. 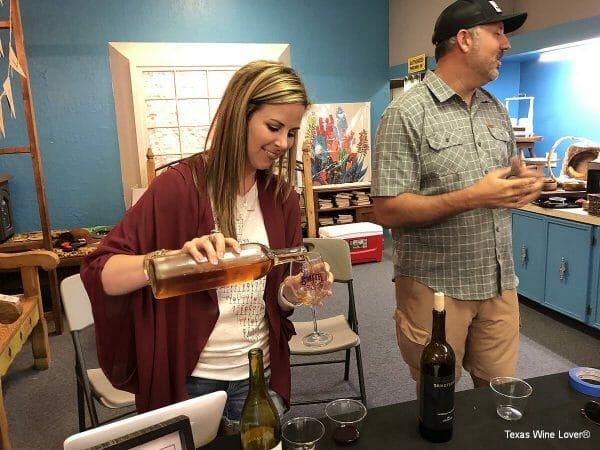 Sandfighter Wines was in the T&S Craft and Antique Mall. This sweet young couple have such an enthusiasm for what they do. Kendra and Chase Lane are so engaging, and their wines are terrific. The Cabernet Sauvignon was superb. Look for more from them in the future. 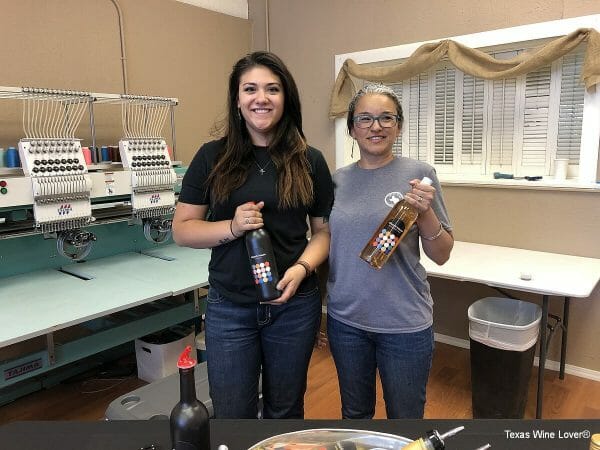 Church House Wines were poured by Chasity Garza and Myrical Jewell. This wine has a name reminiscent of the time when the church was the center of the community. Where the news was shared, and sorrows and joys were felt by all. A perfect wine to share with others. This wine is bottled by Texas Wine Company. 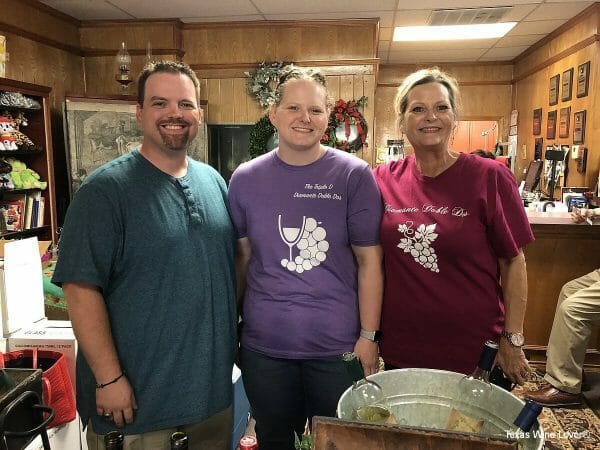 The Triple D Winery was in Lou Dee’s Floral and the award-winning Mary’s Viognier and Ty’s Viognier were both wonderful, plus their Cab was a hit with my buddy. Mary Wilmeth and daughter Liz and son-in-law Ryan were taking on the job of pouring for here. 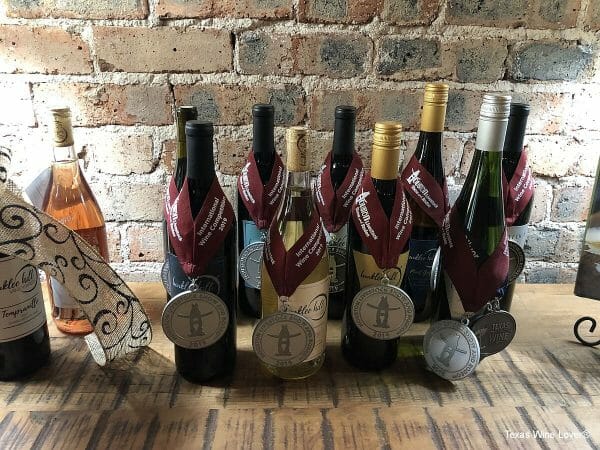 Burklee Hill Vineyards always adds to the fun and this night was no different. Their VIP offerings beforehand were just perfect, and their award-winning wines were displayed and served proudly. 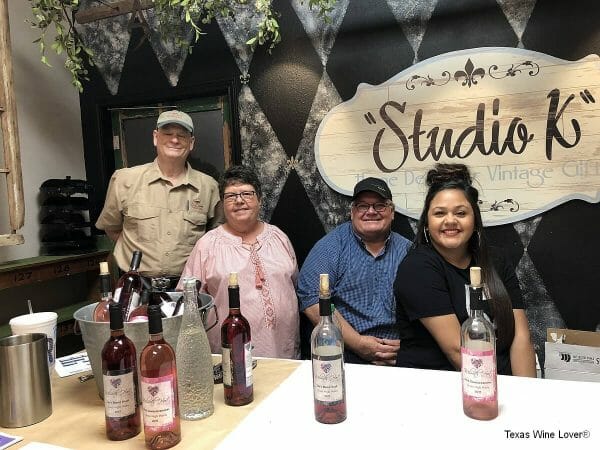 Wilmeth-Hart, a new addition to the Sip & Swirl, was set up in Studio K where Kevin Hart, Gay and Jet Wilmeth, and Trish Arquellez were happy to oblige with their wines. They have some wonderful wines (which were featured in a previous blog post).

Llano Estacado Winery was there, as was English Newsom Cellars. Both were pouring fabulous tastes of their finest. There were also craft beer samples available, such as Plains Brew Co which is crafted in Hockley County by Mickey Minter. Coffee samples were available as well as snacks to compliment the drinks at many locations.

At the end of the Sip & Swirl, these were the people’s choice Supreme Swirl awards:

If you ever get the chance to head to Levelland, there is plenty to do and much to see, and it sits in the heart of grape country with many acres of vineyards nearby and is a neighbor to Terry County which is the Grape Capital of Texas. Make a trip to the Texas High Plains! You will be glad you did.