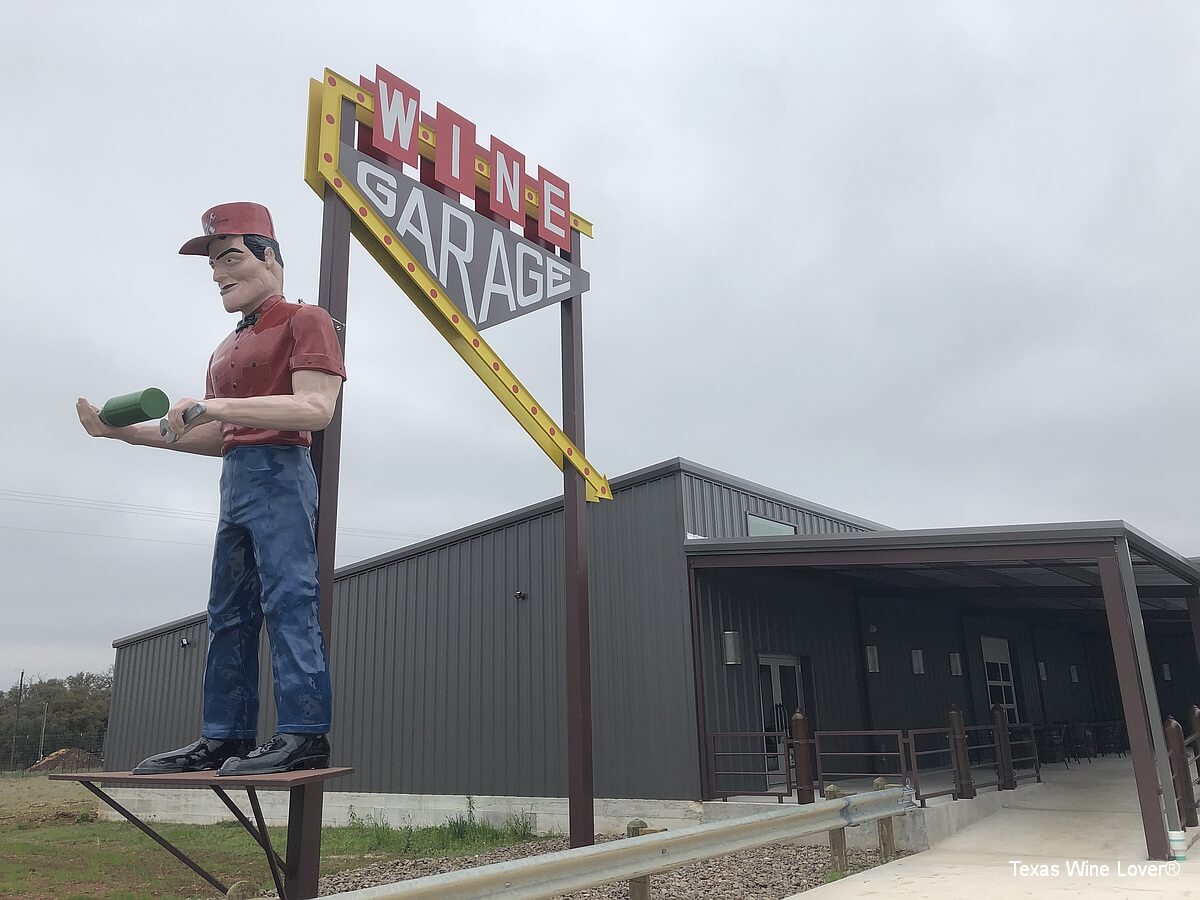 The Wine Garage is a new tasting room on U.S. 290 and is owned by Gail & Jennie McCulloch. The McCullochs are also the owners of Fat Ass Ranch & Winery. That tasting room has been very popular among visitors, and you get the feeling that the new wine venture that opened on December 15, 2018 is also going to be a hit.

I visited the tasting room the last time I was in the Fredericksburg area. The tasting room is near their other one, and you cannot miss it with the large mechanic statue outside the winery. 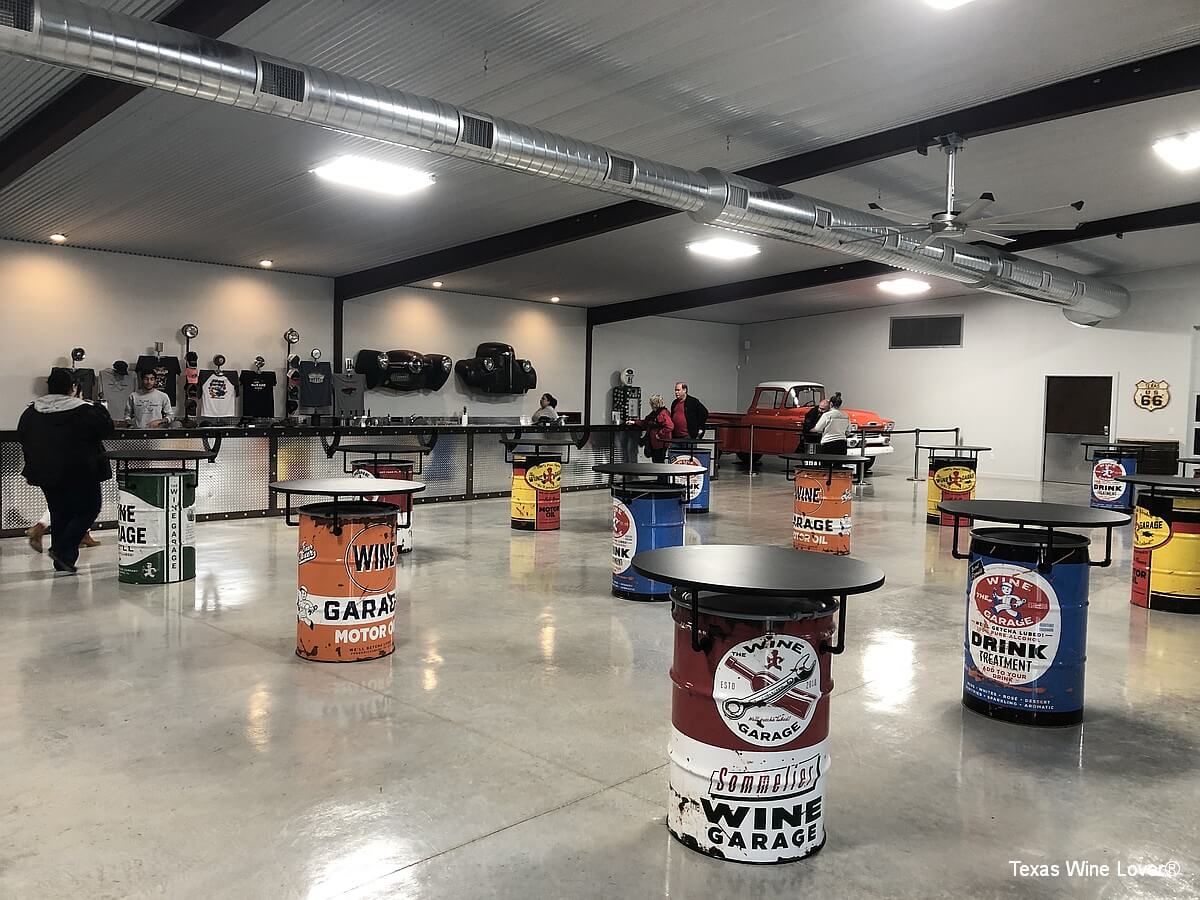 Since the two businesses are owned by the same owners, a lot of the same features and ideas are similar like outside restrooms, plenty of space outside, and a large tasting room with appropriately decorated benches. There is a small gift shop of clothing which I was a little surprised at, but I am sure it will soon be stocked with a large gift shop just like their neighboring winery.

I had seen photos other Texas wine lovers took of cars in the tasting room, so again, I was a little surprised there were only a few cars in the tasting room. As I stepped up to the tasting bar, I was told that an adjoining room that had many more cars was available to visit after you did a tasting. I asked what happens when I come back a second and more times; do I get to see the cars after buying a glass after I know what wine I like? Since they are still new, that question had not really been asked, so it will need to be answered soon.

I started my tasting of the five wines they had available for a tasting fee. The tastings are poured with a measured pourer and there is not a tasting menu, so at the moment you need to look at the different bottles being poured.

These are the wines that were available at the time of my visit:

As you can see, all the wines are 100% Texas. They do not say that on the front label where most people look, but it is visible on the back. Also visible on the back is a nice emblem with the state of Texas and 100% in the state’s borders. That made it pretty clear that it was 100% Texas wine. 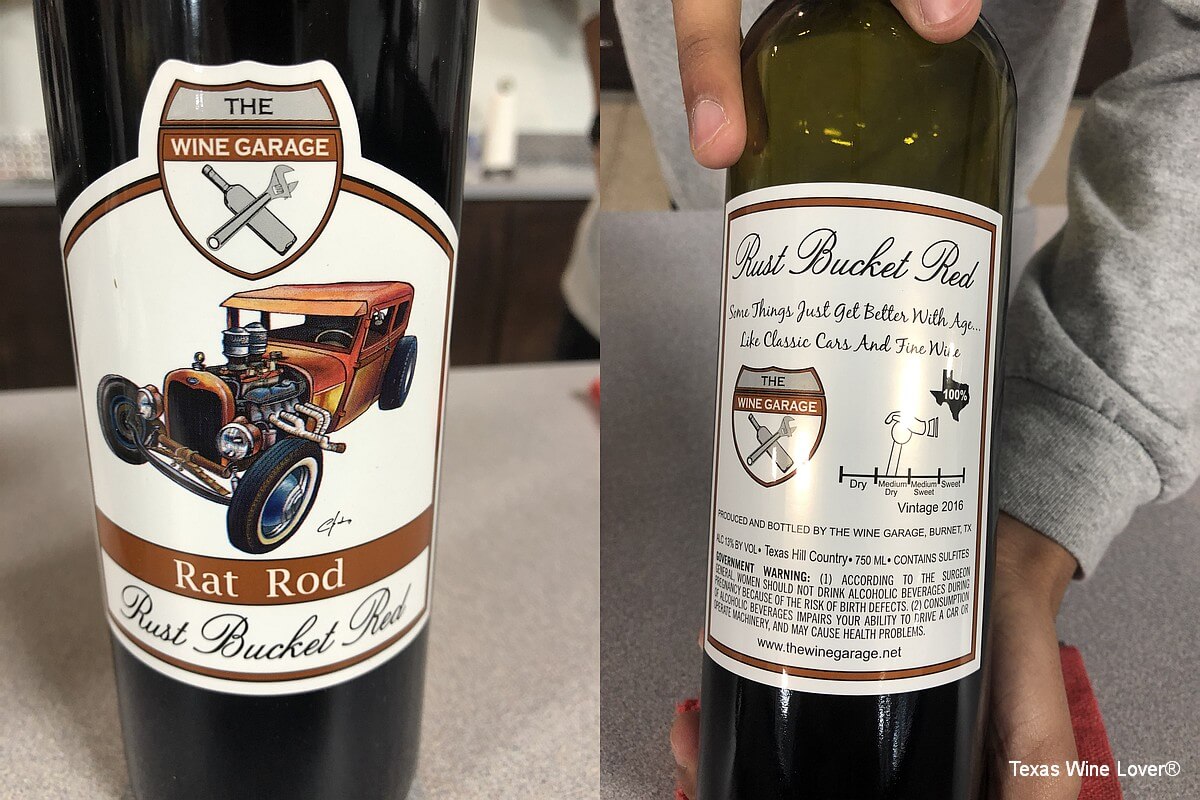 The other interesting thing on the back label is where the wine was made. It was made in the city of Burnet which would mean a very popular Texas Hill Country winery who also does custom crush now. Perhaps knowing that will draw more visitors to The Wine Garage. 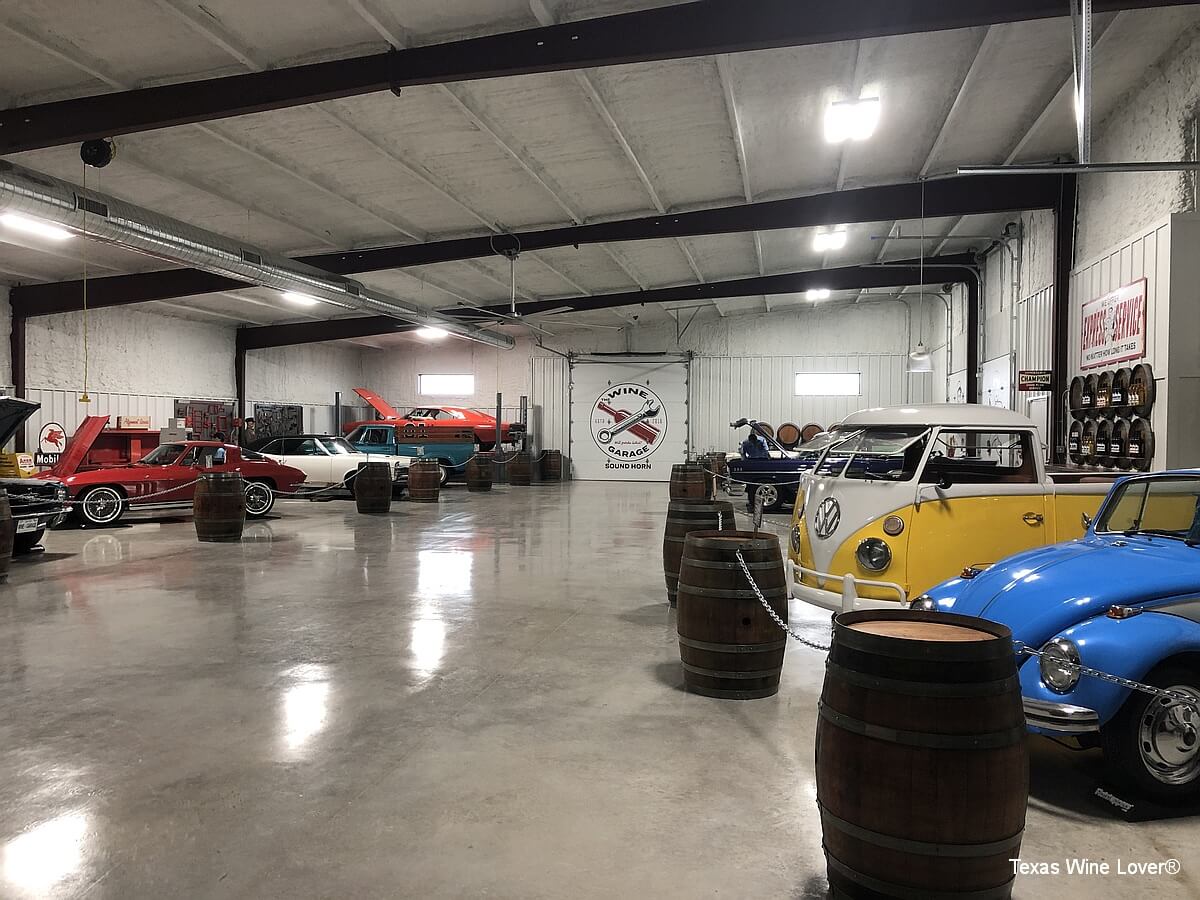 After your tasting, you get the chance to tour the cars in the next locked room with your guide. There are many cars to view from a Volkswagen Beetle and van to a Studebaker pick up truck to a Camaro Z28. 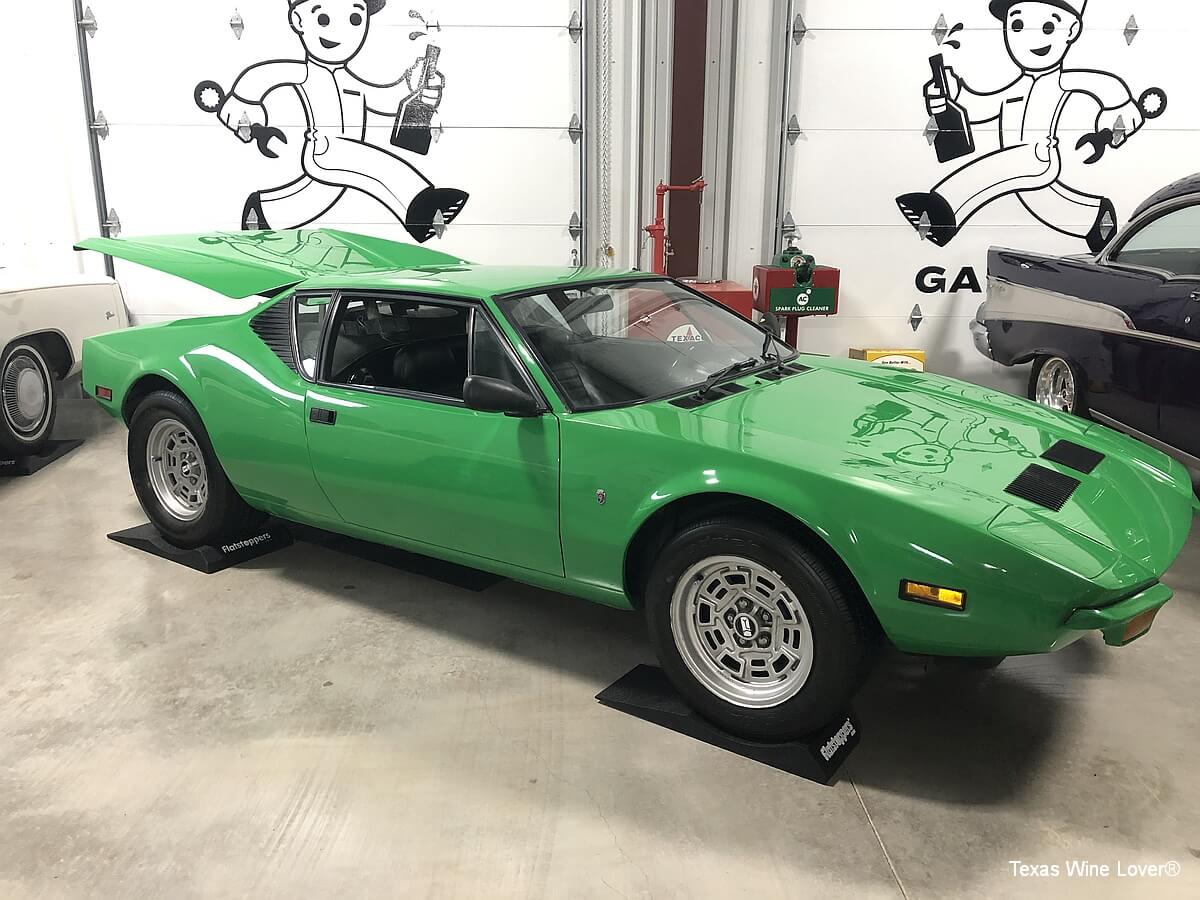 Here are some of the other cars present:

I don’t know how they got my Trans Am in there, but it is beautifully displayed. 🙂 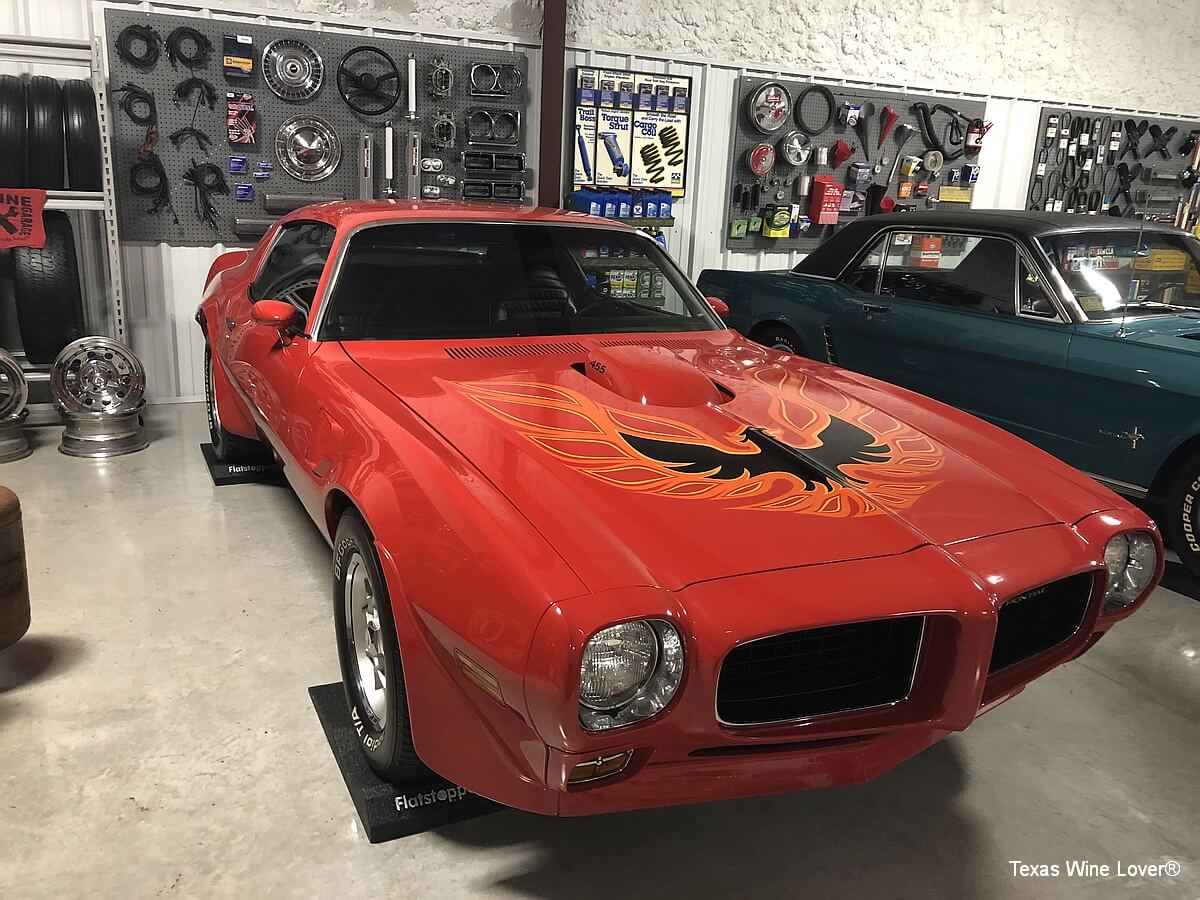 After you taste the wines and realize how well-made they are, you may want to join their wine club with the usual benefits.

Next time you are traveling along U.S. 290, you will not want to hesitate to stop by The Wine Garage.