We received access for review and all opinions are our own. Some links are affiliate links meaning at no additional cost to you, this site may get a small commission if you make a purchase.

Producer Klaas de Jong of Farmhouse Film & TV has created a beautiful documentary series called Wine Masters featuring the primary French winemaking regions. The plan is to produce a total of seven seasons with season one focusing on France.

In season one, Masters of Wine, Tim Atkin and Jeannie Cho Lee, share their knowledge about the five different French regions as we are introduced to some of the most prestigious winemaking families in each region. The focus on each region is the terroir, grapes, and wine made from the multi-generational families which represent the style of wines made in the region. We get to meet multiple members of each family as they progress through the year with pruning, winemaking, harvesting, and more.

Common topics in each region discussed are journalist and wine writer rankings, food and wine pairings, and the family enjoying their wine with a delicious wine-paired meal. When discussing wine rankings, the prevalent belief from the families is their style of wine will not be changed just to please wine journalists. With the tradition of the excellent wines produced, they should not.

The beautiful French hillsides, towns, and overview of wineries are shown throughout the series using nice drone aerial footage. Slow motion video is used quite a bit most of the time to effectiveness, but then other times you may feel it is used too much. The music used in the soundtrack helps to keep things flowing during each episode.

The series is in English and French with subtitles in English, French, German, Portuguese, Spanish, Mandarin, and Russian. Each of the five episodes are 40-45 minutes in length for a total of 3 hours 34 minutes. Season one is available on winemasters.tv, iTunes, Amazon Prime, Google Play, and Vimeo on Demand. An episode is $9.99 and except for iTunes and Google Play, you can buy the whole season for a discounted price of $39.99.

I was given a Vimeo link to watch the series and was not pleased with the Vimeo experience. I like watching with subtitles so I do not miss anything, and that did not work with the Vimeo app from either an iPhone or iPad. In fact, the Vimeo app would not even cast any videos longer than a few minutes to the television. Subtitles and closed captions did work with the Chrome browser on a Windows laptop, but no closed captions appeared on the TV, and they are required since translations of French are done. I even tried the Amazon Fire app for Vimeo, but no closed captions are available. Vimeo support confirmed that it is not possible to view subtitles or captions on Roku, Android TV, or Chromecast. I ended up having to watch the stunning video footage on my largest computer monitor instead of enjoying it on a large screen television.

The successful Guigal family from Northern Rhône is featured in this episode. Featured are Marcel Guigal and his son Philippe Guigal of E. Guigal.

We learned that Syrah originally started in the Côte-Rôtie appellation, so most of the red wines are made from Syrah (pronounced see-rah). In order to make their style of Syrah without the astringency and tannins, the wine is stored in oak wood casks for 3.5 years to go through a maturation process. It does take longer to do it this way, and the Guigals say they are the only winery in France that uses that process. 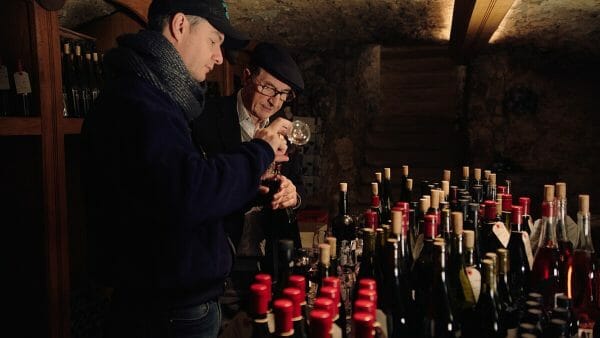 When making a blend, they can have up to 850 different samples to use in order to determine the final blend. They sample every day and determine in their mind how the wine will taste 2-3 years in the future. Philippe Guigal vinifies the wines and ages them separately before blending just before bottling.

The primary focus is on a single vineyard Syrah, but they also make what they call three La-La’s: La Mouline (named after the vineyard on a hill), La Turque, and La Landonne (they planted the vineyard when they were having a child, so it became Philippe’s vineyard). Two are blends of Syrah with Viognier and one is pure Syrah. 20% of Viognier can be added to the Syrah. The winery produces 6 million bottles of wine a year.

There was discussion about wine ratings and the different people who give ratings, and how important the ratings are for sales. However, Philippe cannot make the same kind of wine every year, and instead, he makes the same Guigal style every year. Regarding the ratings, Philippe Guigal says, “I am convinced that wine is quite stable. People are not.”

The most famous area within the Loire Valley is Sancerre which is only 3,000 hectares. The classic variety grown and made there is Sauvignon Blanc. Being in northern France brings acidity in both the red and white wines. The different nature of the soil shows a different style of Sauvignon Blanc than the rest of the world. Since the vines reach 12-13 meters deep to get their nutrients, they get a tremendous dose of minerals, hence producing the acidic wines. Other terroirs have vines with roots of about two meters deep on average. 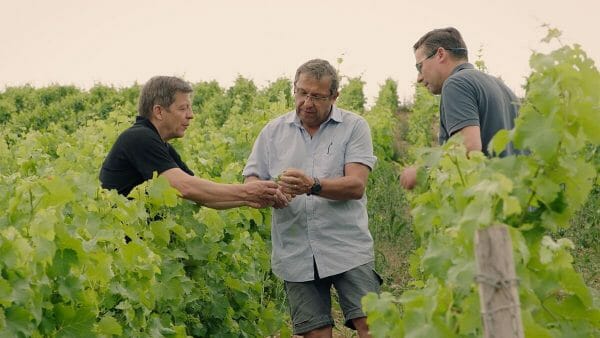 The family starts pruning in December and it takes four months to complete the pruning of 72 hectares of vines. Henri Bourgeois currently makes eight different Sancerres, and soon to be three more single vineyard wines, because each parcel of land with vines has a different taste.

Henri Bourgeois developed a gravity fed system in the year 2000 after seeing how wineries around the world are using it. With the gravity feed and no pumps, that allows the wines to be made with no oxidation.

Loire Valley wines do not normally see high ratings, so the area is not often thought of when thinking of wines in France. The point made was to make your own discoveries with wine instead of relying totally on ratings and depend on your own judgement.

The family prefers to pair some goat cheese from Chavignol with a Sancerre wine for the best wine and food pairing.

Bordeaux is one of the French wine regions where the highest priced wines are produced, and is the birthplace of Merlot, Cabernet Sauvignon, and Cabernet Franc. 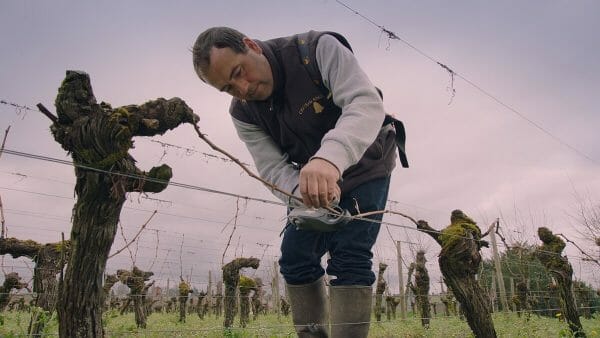 Binding in the vineyard

Château Angélus is one of the only estates where they make about 50/50 Merlot and Cabernet Franc. The primary reason they use more Cabernet Franc is because Hubert’s grandmother’s name was Bouchet. Bouchet is another name for Cabernet Franc, and because of that, they moved from using 30% Cabernet Franc to 47%. Hubert’s grandfather fell in love and said, “OK, I will increase the Cab Franc because I love my wife.”

The estate has 39 hectares of vines. 12 hectares are dedicated to the second and third labeled wines, the Le Carrillon d’Angelus and No. 3 Angélus. The first label wine Angélus was elevated in 2012 to a Premier Grand Cru Classé A which only four properties in Saint-Émilion have. 100.000 bottles of wine are produced a year. Besides making his own wine, Hubert de Boüard de Laforest is a winemaking consultant for over 60 different properties all over the world.

Bordeaux is unique among the wine regions offering futures of wine while often selling the wine when it is still just a few months in the barrel. Futures is a way that is profitable for everyone. For the winery, they can get cash earlier. For the trade, they just need to pay 50% of the price and then they can start selling the wine. For the consumer, it is a way of getting wine for lower prices than you would pay three to four years later. The young wines are rated by journalists, and then the châteaus base their prices on those scores. Consumers need to realize that a high rating is usually when the wine is reaching its peak, not how it is now. As an example, for a 2010 wine, you will need to wait about 20 years for that to peak.

The market wants Bordeaux to produce faster consuming wines, but the chateaus do not want to do that. For example, the wine of Angélus is a wine that can age for 30-40 years. There are 7,000 producers in Bordeaux and a lot of them do volumes of 300,000 bottles.

Château Angélus still uses horse drawn equipment in the vineyard instead of tractors because of the environment, but also so the soil does not get as compacted. 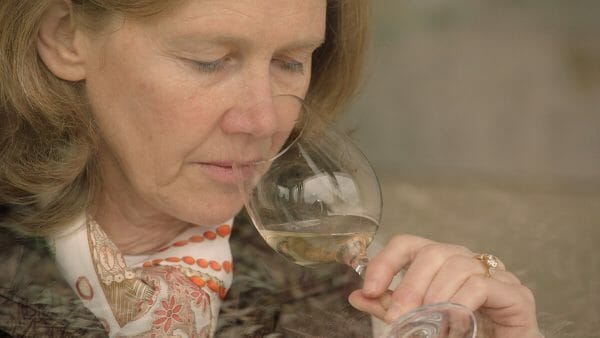 I was confused for a while during the episode because they said three different siblings enjoyed different aspects of a winery: vineyard, winemaking, and management. However, we only heard from a brother and sister, not the vineyard person. Finally, Philippe Drouhin spoke, and we were introduced to him.

The vineyard known for Chardonnay is in the Clos des Mouches. It is a Premier Cru vineyard within the commune of Beaune. Overlooking the vineyard, Philippe Drouhin decided the farm would be grown biodynamically. The best wines made come from the middle of the slopes where the soil is better.

Regarding aging of wines, Tim Atkin explained, “If you look at the great wines of the world, red wines that age well, like Barolo or like the wines of Bordeaux, they’re quite tannic, they have structure, and that supports them as they go along. Pinot Noir is a bit counterintuitive in that it doesn’t have a particularly large amount of structure or tannin. What it does have though, is acidity and freshness. And it’s the acidity which helps Pinot Noir to age so well.”

Maison Trimbach has been making wines since 1626. Wines produced are Riesling, Pinot Gris, and Gewürztraminer. Like Loire, Alsace is also underappreciated in France. It is made more difficult because it looks Germanic and yet it is French. It has German street names and yet it is French. It has been in German hands two separate times. Alsace is kind of a new French region since 1949. 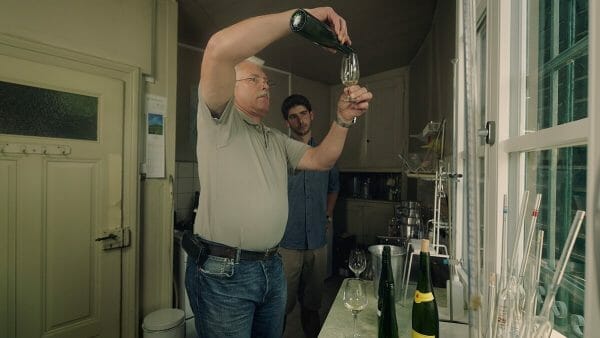 One interesting note was that all Alsace wines have to be bottled in the taller flute bottle. The dimensions may vary slightly, but the characteristic shape has to be the same according to regulations. One other unique item is that Alsace wines are unusual in France in that they actually say the name of the grape on the label such as Riesling, Pinot Gris, and Gewürztraminer.

There are 800 different terroirs in Alsace, so each 100 meters, you could have another terroir. The soil can be granite, sandy soil, sandstone, limestone, marl, marl and sandstone, clay, and sometimes a mixture of several.

Of the vineyards shown from the different regions, it was interesting to see the vines are taller in Alsace like United States vineyards. The other regions have much shorter vines. There are 125 acres to harvest for Trimbach, so harvest takes about four to five weeks. All grapes are hand harvested just like the other vineyards shown throughout this series.

When others in Alsace started making sweeter wines, Trimbach made dry wines. Unfortunately, Alsace wines do not provide any indication of the sweetness of the wines, so you need to know the producer and their style of wines.

Trimbach produces one million bottles a year, and they keep the wine a minimum five to six years in the cellar before the wine is released.

After watching season one on France, I feel like I have been there, and cannot wait until I actually get the chance to visit the different wine regions. Coming up this year for the Wine Masters series is Italy. I look forward to watching this and future seasons. I would highly recommend to you aficionados to sit back, watch, and enjoy the documentary series.