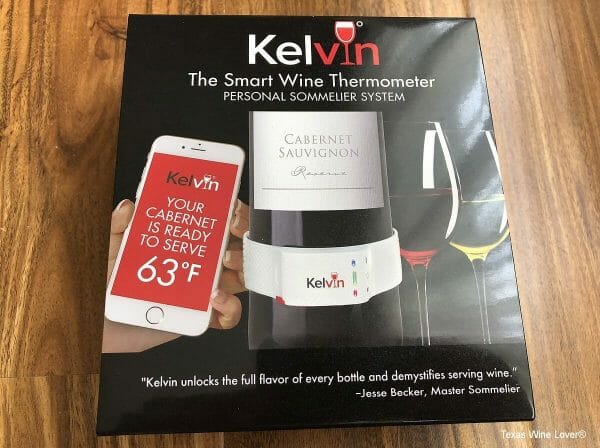 You probably know to serve your white wines chilled and red wines at room temperature. But what exactly is chilled? And what exactly is room temperature? I can certainly answer the latter question, because room temperature for a house in Texas is never the temperature red wine should be served at, unless your heater went out in the middle of a rare cold spell. As far as chilled white wines, just stick it in your refrigerator and everything is fine, right? Well, how do you know when to pull it out to drink? Answer: the Kelvin K2 will tell you. Intrigued?

The Kelvin K2 comes in a box with the K2 band, charging cable, six different colored stickers, and the instructions. The other missing piece is the free Kelvin K2 smartphone app for your iPhone or Android phone. Download the app and charge the K2 band using the USB cable connected to either your computer or other USB charging adapter, and you’re ready to start checking your wine temperatures. 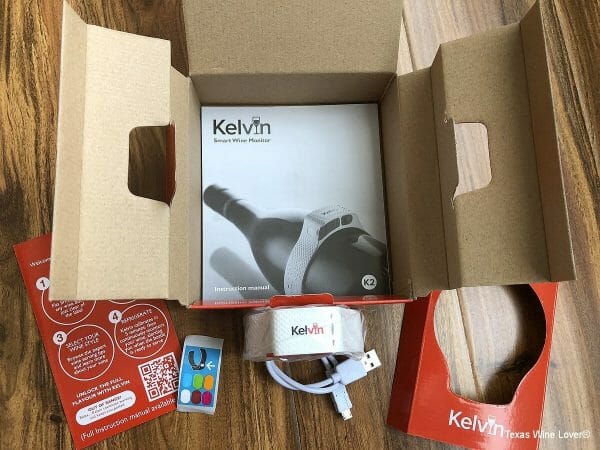 The instruction manual makes it appear that most people store their wines on wine racks, because it refers to taking your wine bottle and putting it in the refrigerator to get the proper wine temperature. For those of us who have had some exposure to heat on wine bottles and only store bottles in wine coolers, it might be just the opposite. Take the bottle out of your wine cooler and set it on the counter to warm up. Either way, the K2 will tell you when the wine is ready to be served. 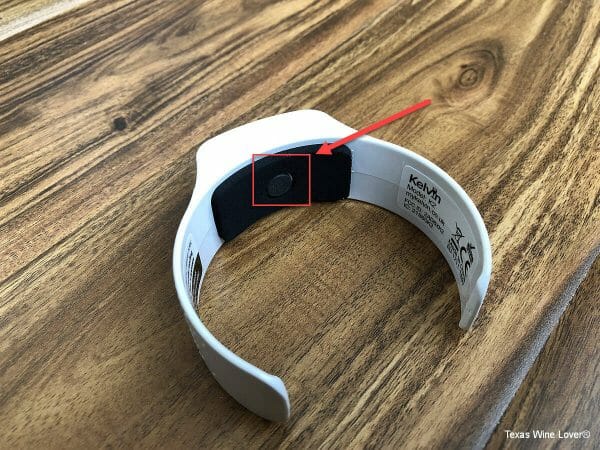 Place the K2 band around your wine bottle so the temperature sensor is not on a label, but directly on the glass. When I first read this in the instructions (by the way, always read the instructions first), I thought it would be difficult to find a place on some wine bottles, but often there is space on the bottle between the front and rear labels which makes for a convenient place to put the K2 band. If the bottle is full, put the band in the middle of the bottle, and if wine has been removed already, just make sure the band is below the wine level.

Start up the Kelvin K2 app on your smartphone and it is now time to tell it what kind of wine you’re going to be serving. The Kelvin app has details on over 200 types or varieties of wine (Chardonnay or Pinot Noir for example), but besides just the serving temperatures, it also includes tasting notes, food pairing recommendations, common label terms, similar wine recommendations, and the proper glassware to use for the wine. If you cannot find your wine type in the app, there are eight wine styles (full bodied red, light bodied rosé, light bodied white, etc.) to cover the others. I took a look through the app for popular Texas wines and it did have most, but there was no Tannat in the grape list, which was a little surprising since the product was developed in Europe. Also notable was no sparkling wines like Cava in the list. 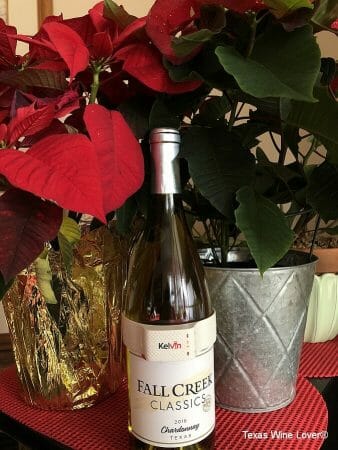 I’ll come back to more details about the app later, but it was time to test the K2 and app. I needed to turn on the K2 band, which had been previously been charged, and the lights lit up indicating it was ready. I first chose a Chardonnay to sample because obviously it was in the Kelvin app’s list of grapes. My next problem was determining what type of Chardonnay I had chosen. I couldn’t tell whether the Chardonnay was oaked or unoaked because it didn’t indicate it on the label, but after tasting it, I guessed it was unoaked beside the fantastic price I paid for the bottle. (I did confirm later with the winemaker and indeed it was unoaked.) The instructions indicate there will be a range given on the app, and they recommend chilling the wine until it is at the bottom of the range. That gives the ideal temperature for the longest possible time while out of the refrigerator.

I put the K2 band around the wine bottle which I had pulled from my wine fridge. I have the fridge set at 57 degrees, but for some reason, the K2 registered it saying it was 64 degrees. The instruction manual does say to allow at least five minutes for an accurate reading, so I’ll contribute the difference to that. 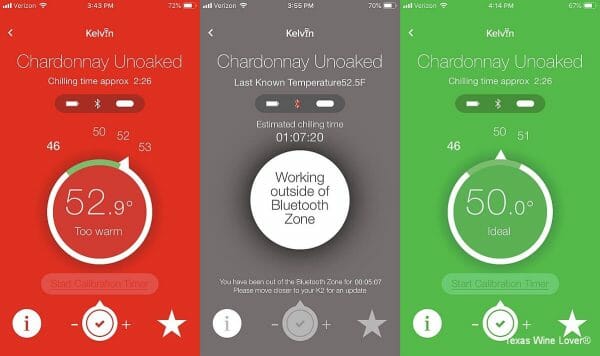 The approximate chilling time given by the app was 2 minutes 30 seconds. It took a lot longer. I should have kept the starting time, but it was at least 50 minutes. Waiting for the wine to be at the right temperature was like waiting for a wine to decant. While waiting for the bottle to chill, I moved the bottle of wine deeper in the refrigerator and that did seem to make the cooling process go faster. You’ll need to experiment to find the best section of your refrigerator to use.

Since it had taken so long, I could not wait until it got to the bottom of the ideal range, so I pulled the bottle out when it got to the ideal 50 degrees. I tried the wine again and as expected, it definitely did taste better. Normally, I would take a white wine out of my wine fridge and set it in the refrigerator for about 15 minutes. After using the Kelvin, I will most likely need to plan a little longer.

That reminds me of a story. While visiting a winery, the owner/winemaker preferred to serve his white wines at room temperature so the flavors were not masked. I asked him what the temperature was of the wine we were tasting, and he replied, “That’s sitting on top of the fridge in the lab temperature.”

The K2 band works with Bluetooth on your phone and has a range of about 32 feet in the open air to 9-15 feet when the K2 and wine bottle is placed inside a refrigerator. While the Chardonnay was chilling, I walked away watching the signal on the app. I was eventually out of Bluetooth range and the app informed me of that. When I walked back into signal range, the signal came back.

One of the nice things about the app is that it can support up to six different Kelvin K2’s at one time (remember those six different colored stickers, one for each K2?). Throw those K2 bands on different bottles and it can handle the different temperatures. There are other nice features in the app such as being able to indicate your favorite wines, so you don’t have to keep searching for them in the app every time.

I decided to test the Kelvin K2 the next day on some red wine.  I had a Primitivo that I had previously tasted, was stored in the refrigerator overnight, and I placed it on the kitchen counter to warm up. Well, the first thing I noticed the K2 band didn’t work. I wasn’t sure why because I had fully charged it the day before and battery life is supposed to be 16 hours. The band comes by default to shut off automatically after three hours, but that is adjustable in the app, and I had changed it the day before to shut off after one hour. So regardless, I charged up the band again and placed it on the Primitivo. By the time I came back to my test, the Primitivo had lost its chilled temperature. 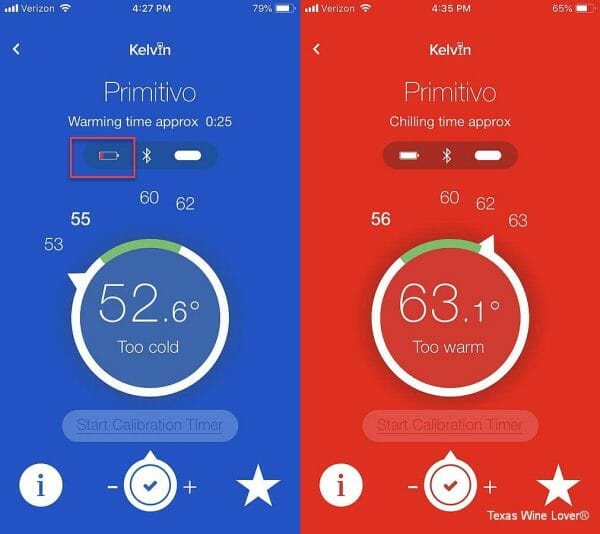 Kelvin says Primitivo should be served at 61 degrees. I tried the wine first, and then put the Kelvin K2 on the bottle. I was surprised to see the temperature was already 60 degrees and ideal. I didn’t think the room temperature was that cold, especially when the thermostat is set to 71 degrees in another room. The app has a calibration to do with the K2 band. After the five-minute countdown timer of calibration was over, my smartphone said it was not in range of the sensor even though I had not moved. I went to the bottle to get it back in range, and when it came back in range, the temperature of the bottle now said it was over 63 degrees, but then it started flipping with the 60-degree ideal range. Finally, it stabilized at the higher range, and I put the bottle back into the refrigerator to wait for it to get back to the ideal temperature. When it reached the 60-degree temperature again, I took out the bottle, poured a glass, and with that three-degree temperature change, the Primitivo did taste better.

After trying a few tests, I am still not sure exactly what the calibration timer does and how to use it correctly. The manual states, “Always allow at least 5 minutes for an accurate reading, especially when there has been an extreme change in situation or ambient temperature. Using the Calibration Timer, on the Temperature Page, will help you to judge the appropriate time.”

Looking at the K2 band, I just thought that it would not really fit on the big bottle sizes that some wineries are starting to use more often. I pulled one out of the wine fridge and wow, the band was able to fit around the bottle. The key of course is the sensor on the inside of the band, and as long as that’s touching the bottle where the wine is, all is good. The K2 band does fit bottles from 60mm to 80mm in diameter. 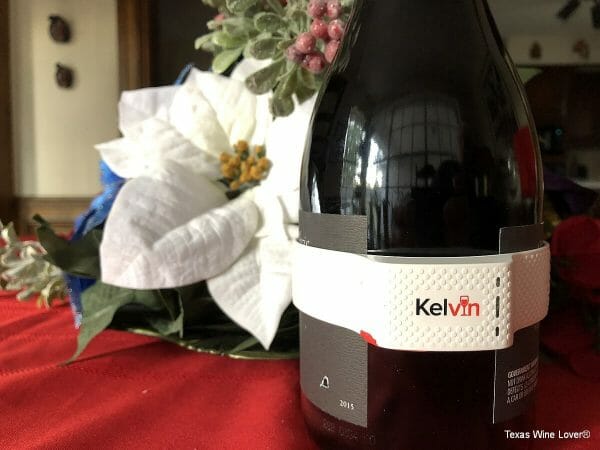 Kelvin K2 on a big bottle

If you do not disagree with the correct serving wine temperature (remember that winery?), you do have the ability to adjust up or down to your preference in the app.

Would I use the Kelvin K2 Smart Wine Monitor again? Absolutely! With the variances of temperature especially in Texas, this is by far the best wine thermometer you can get to accurately tell you when to best enjoy your wine.