On Wednesday, November 14, I was excited to walk into Salt & Time, not just because I was in this awesome east Austin restaurant, but more importantly due to the event taking place there that evening. Texas vs. The World (red blends) was the about to go down and that brought a broad smile of anticipation to individuals checking in for the evening festivities.

This is an event that has thankfully been resurrected by Daniel Kelada and his partners at Vinovium to help showcase top tier Texas wines against iconic and top tier world wines. This was a popular event allowing individuals to participate in a 20-wine blind taste test to see just how Texas wines were standing up against similar wine styles from various locations across the globe. So, it was no surprise that fans were elated to see its rebirth.

Long tables were set up by the front windows for guests to sit family style, with five wine glasses atop specially prepared placemats featuring the names, vintages, and price points for each of the five red blends to be poured in each flight. There was a total of four different flights planned. The regions highlighted in each flight included Italian blends, Rhône blends, Spanish blends, and Bordeaux blends. 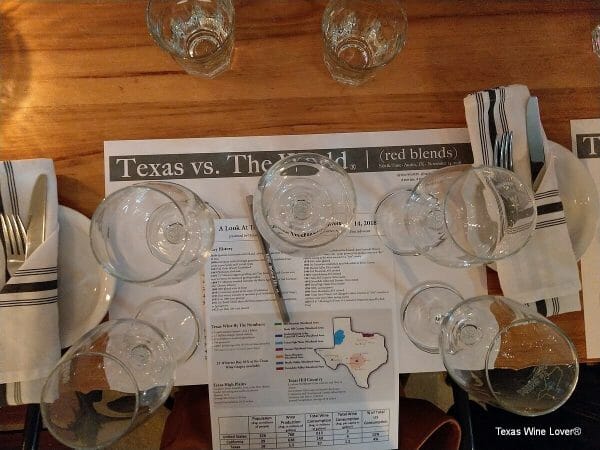 As guests got seated and introduced themselves, the waitstaff delivered bowls of meatballs and charcuterie boards to provide a little something to nosh on with the wines or between flights. Daniel Kelada, one of the owners of Vinovium, was on hand to greet everyone and explain how things would work as he guided the attendees through each of the tasting flights. The premise was everyone had a list of all wines being poured within each flight. That document was where individuals could annotate which of the five wines correlated with the wine in each of the five glasses. Participants were also encouraged to rank their favorites among the five.

Once everyone had time to taste each of their wines a few times and started assessing which was in each of their glasses, Daniel provided the order in which each wine was poured. After everyone took great time in deliberating over their answers, we were quickly either delighted in our correct choices or moaning our misses in ascertaining the exact wine to glass relationship. None the less, guests were relishing the experience and enjoying the matchmaking game. 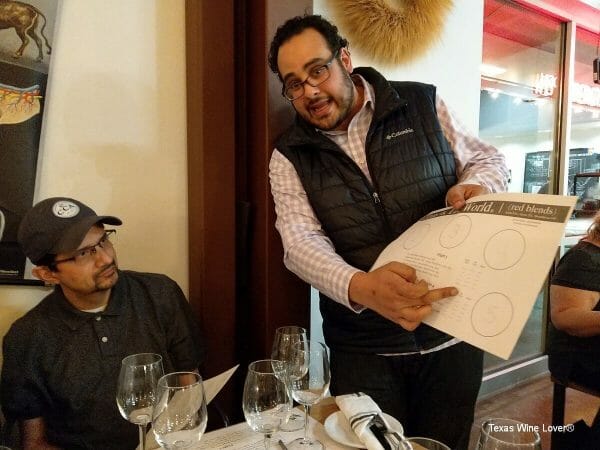 The Texas wines poured in the first flight of Italian red blends were:

These were compared to:

The Texas wines in the third flight of Spanish blends were:

These faired nicely against:

These were poured alongside:

So, how did I do and what were my favorites you might wish to know, right? Well, I did get some of the wines correct, but I didn’t score a perfect score. As a matter of fact, I don’t think anyone scored perfectly. However, from the delight seen and heard around the tables, the event was incredibly enjoyable and successful. Everyone had great fun in tasting and guessing and finding new favorites within each of the flights. As for my favorites, I will keep that to myself for now, but definitely, a few Texas wines were my favorites in comparison to some of their Top Tier or Iconic worldly peers. Kudos to the team who coordinated everything and hope to see everyone at a future Texas vs. The World wine tasting.