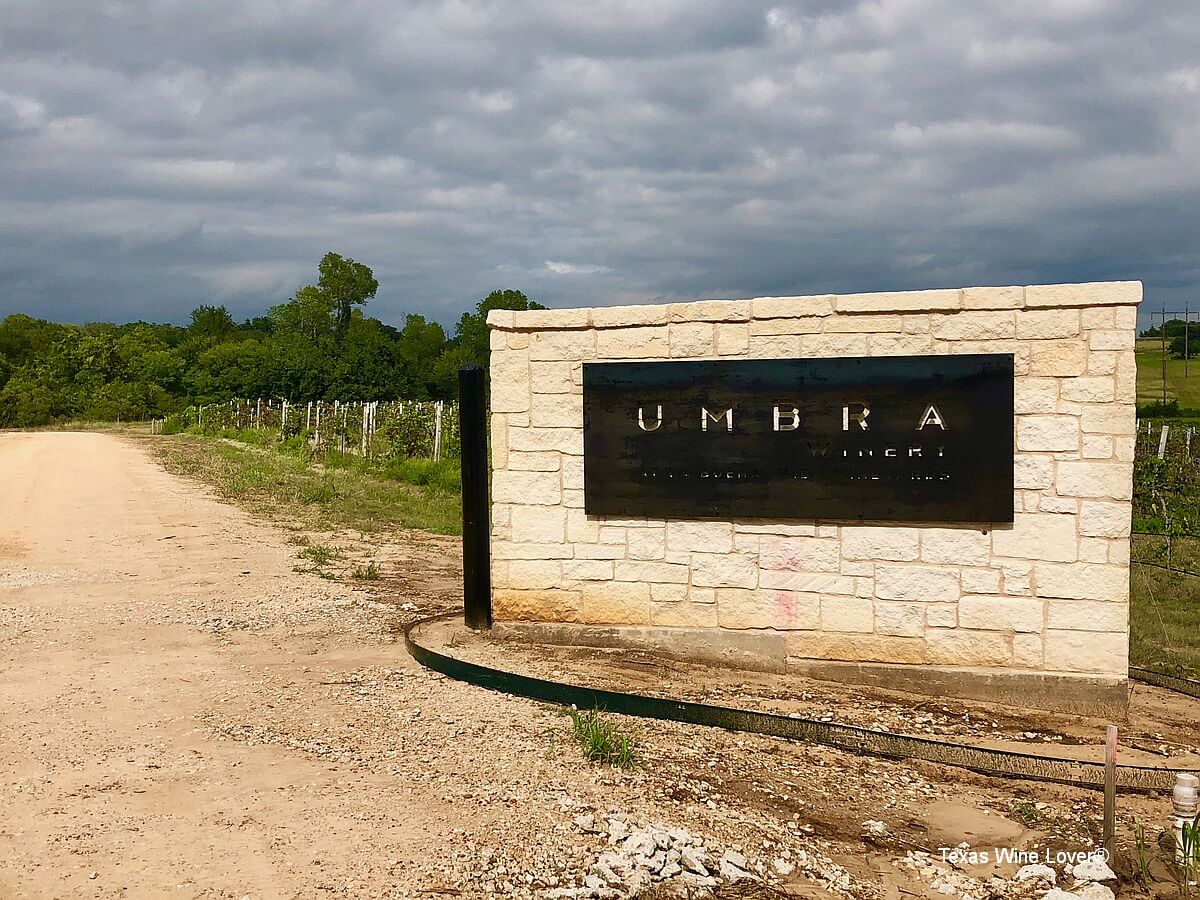 Umbra Winery at La Buena Vida Vineyards held a very special event recently, and Texas Wine Lover was pleased to receive an invitation. The purpose was to honor Dr. Bobby Smith, founder of La Buena Vida Vineyards at Springtown, with the dedication of the winery’s new barrel room. John Wilson and Debbie Ray-Wilson purchased the property from Dr. Smith almost two years ago. The Wilsons have made some significant changes in the property while developing a strong relationship with Dr. Smith and honoring his legacy. 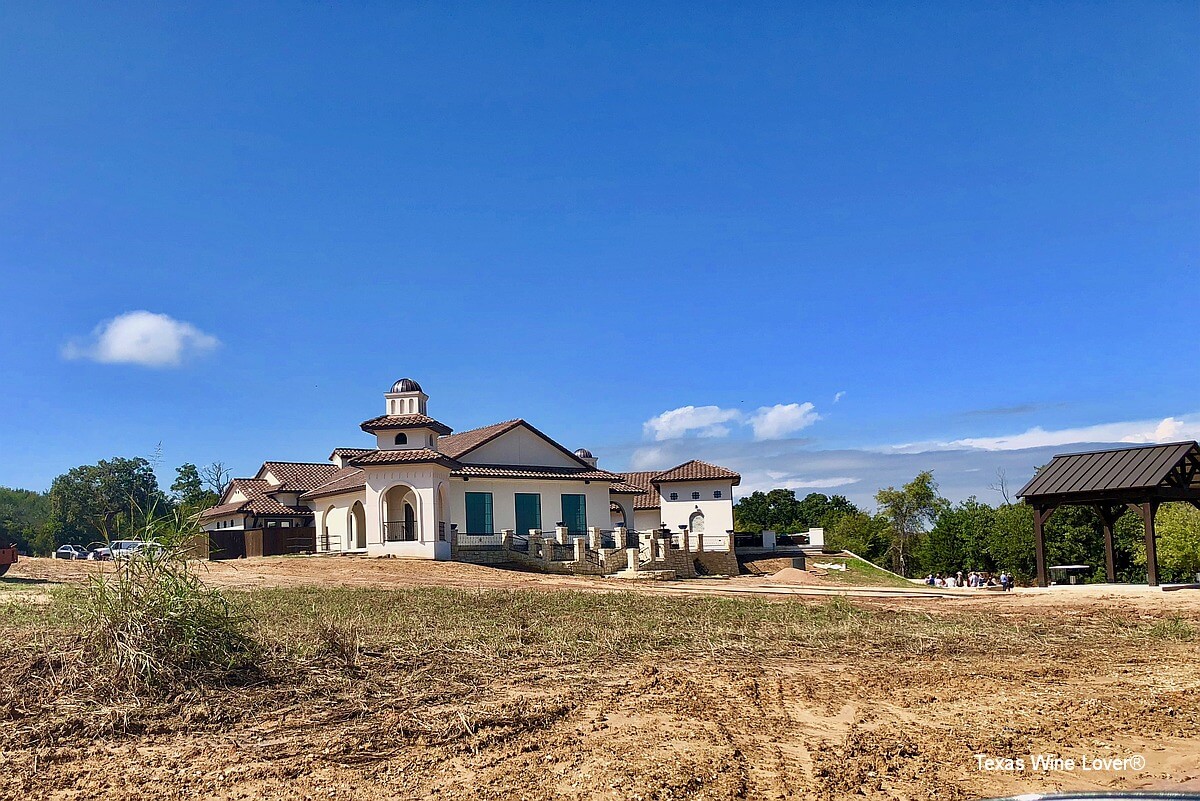 The invitation-only gathering was held on a warm, sunny Saturday just before a massive rain system moved in. Under threatening skies, attendees enjoyed one last outdoor activity. To begin the festivities, Dr. Smith was seated at the entrance to the barrel room while John Wilson gave welcoming remarks. He thanked the assembled crowd, then made a surprise announcement that the barrel room was being dedicated to Dr. Smith. John unveiled a plaque that hangs near the entrance. Guests toasted with sparkling wine to celebrate the moment. 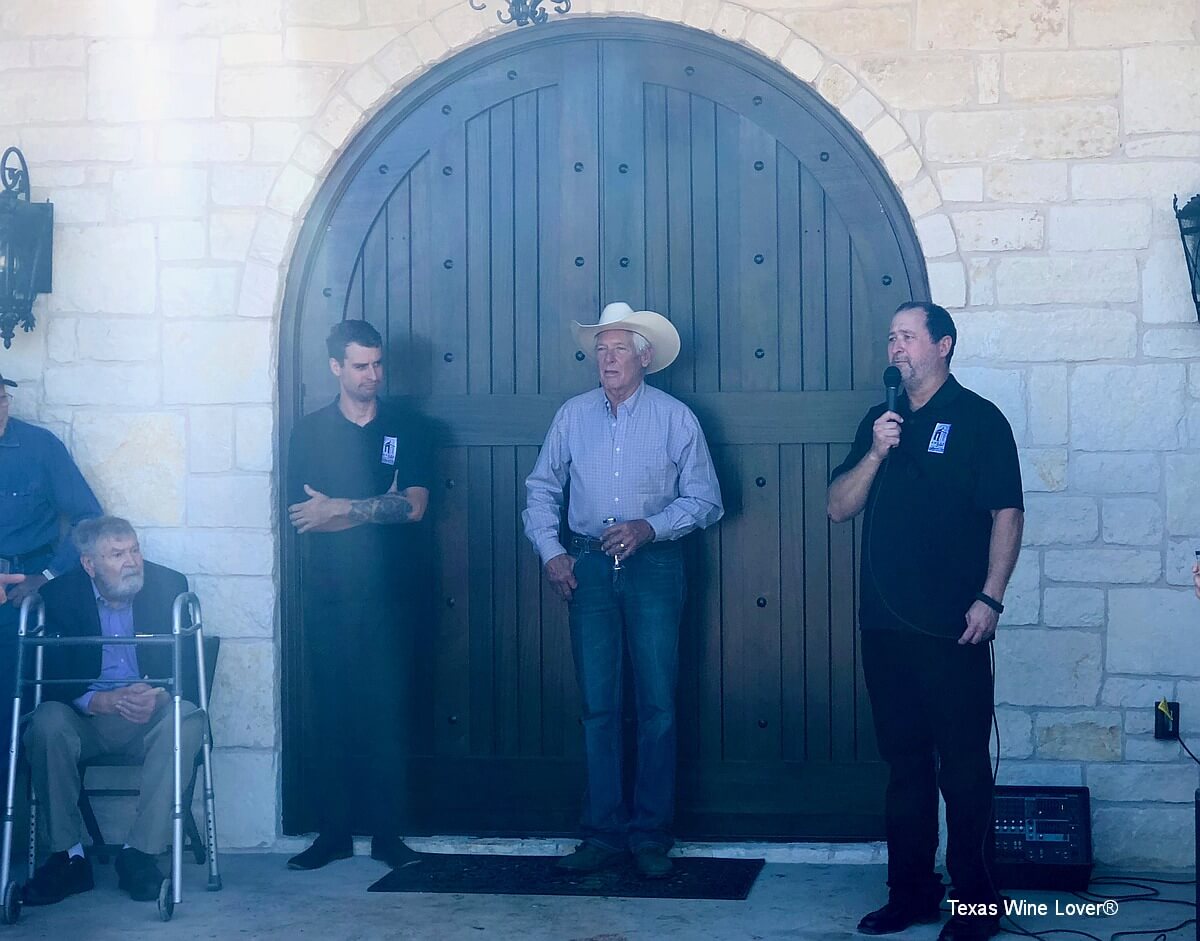 In 1972 Dr. Bobby Smith established La Buena Vida Vineyards with the dream to help a thriving wine business in Texas. For over four decades he worked with growers, winery owners, and legislators to help bring the industry to where it stands today.

We are honored and grateful to be given the opportunity to stand on his shoulders to bring the third oldest winery and vineyard in Texas, Umbra Winery at La Buena Vida Vineyards, to the next generation of wine lovers. 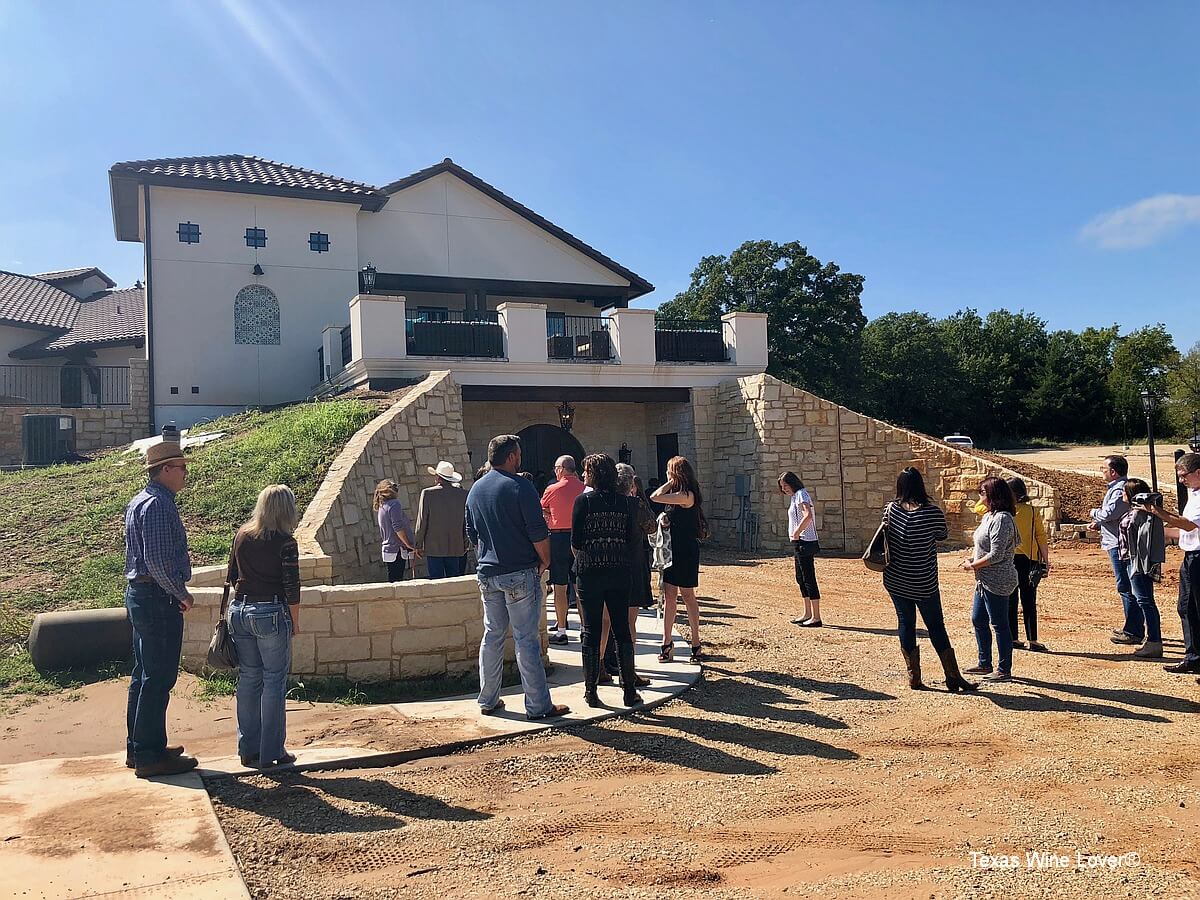 Dr. Smith, or Dr. Bobby, as he is commonly known, then gave his thoughts on the Texas wine industry. He has certainly seen a lot of changes since he founded La Buena Vida Vineyards in the 1970s. In his remarks, Dr. Bobby spoke of the founding of La Buena Vida and the other wineries that started around the same time. He mentioned the many stumbling blocks he encountered. Attendees laughed when Dr. Bobby gave this piece of advice, “If you start a business in Texas, make sure it’s legal to have that kind of business. It wasn’t when we started!”

He encountered a number of legal challenges and worked to change the laws to support grape farmers. Dr. Bobby was a friend of Leon Adams, author of The Wines of America and former president of Wine Institute of California, the most successful lobbying organization in the industry. Mr. Adams gave Dr. Bobby advice about getting a bill passed. He said the four most sacred things to politicians are God, Country, Family, and Farmer. Some combination of these four needs to be present in any bill for it to pass. Dr. Bobby used that advice to craft subsequent legislation including the Texas Farm and Winery Act that allowed wine to be produced at La Buena Vida.

Dr. Bobby says, “There’s no limit to what the wine industry will do in Texas. It’s going to bring more tax money for the state and local authorities. It’s going to make life more sensible and enjoyable for the people of Texas who enjoy wine. I think there’s no end to what our industry can do. And I’m glad to have been a tiny part of it in the early days.”

Thank you, Dr. Bobby, for all you have done to support the Texas wine industry.

After the formal remarks, guests entered the barrel room to see the rest of the new 8,000 square foot event venue. While the barrels are behind glass, the area in front of the glass wall was large enough to hold the crowd. 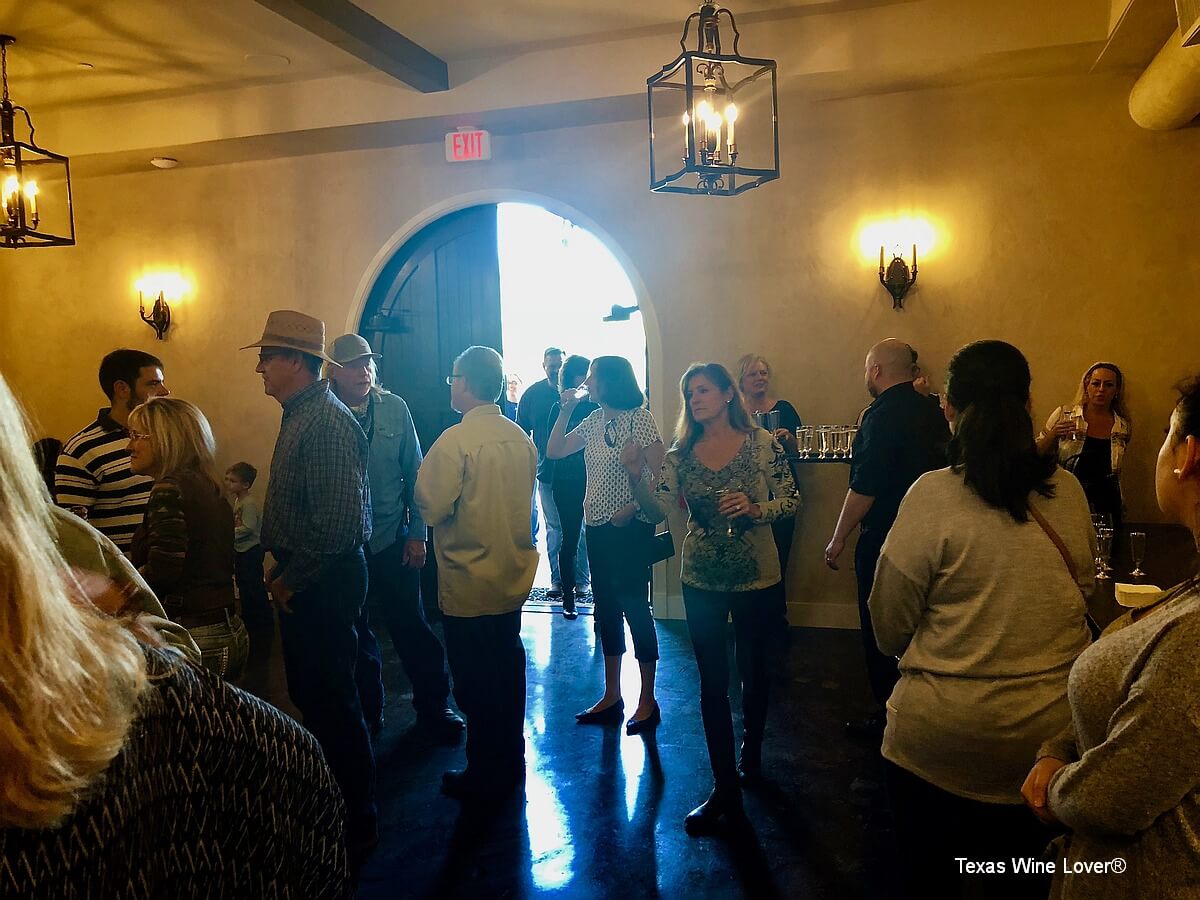 Then we went upstairs to see the amazing ballroom space, a fun wine tasting bar, and a large outdoor terrace. A saxophone player played and sang on the terrace as the clouds moved in. Guests enjoyed a buffet of lovely appetizers, and wine was purchased and consumed. Quite simply, it was a lovely way to spend a Saturday afternoon. 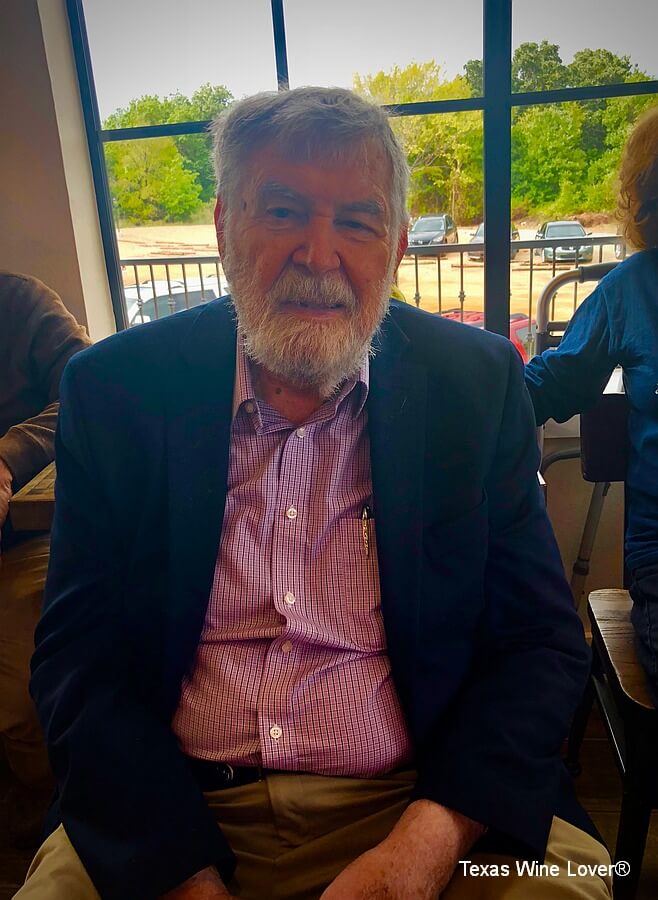 Umbra at La Buena Vida also features a production facility across the road. A new addition to the property is a village of small homes that were brought in from the TV Show Texas Flip N Move, a DIY Network show. The cottages are available for rent through the winery’s website. 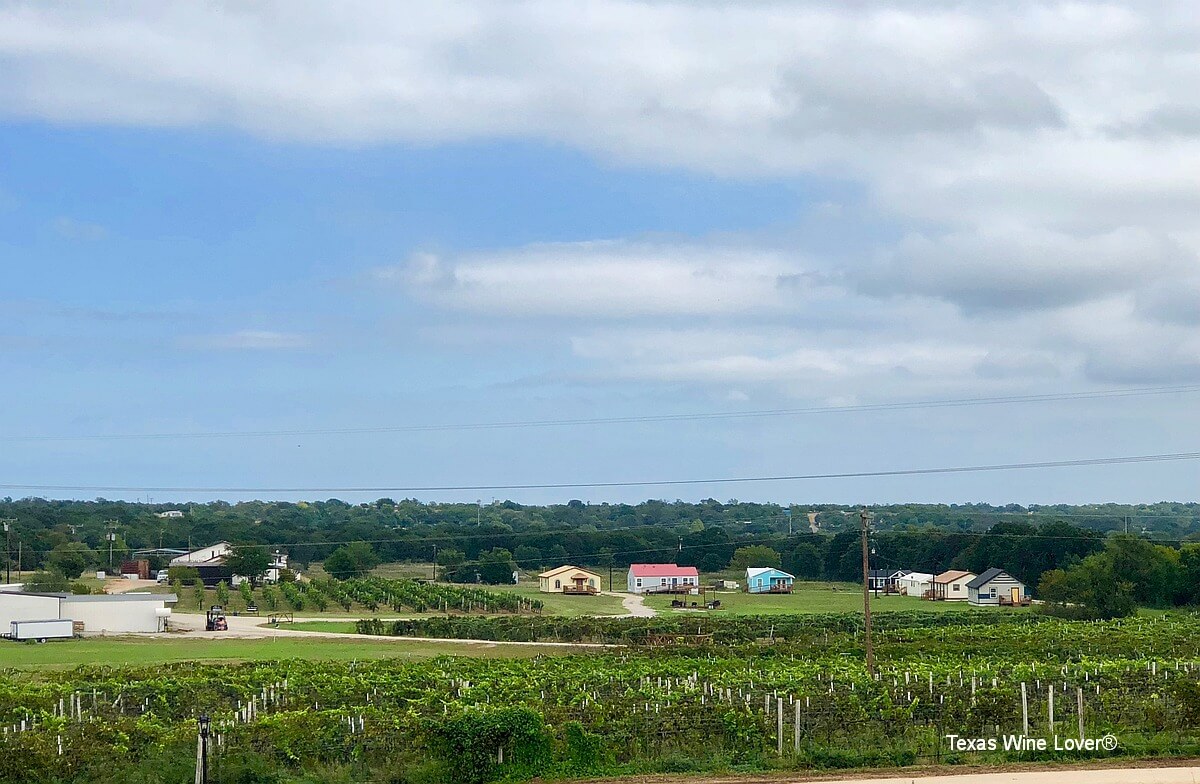 Go see the winery at the Harvest Festival they are hosting this weekend, October 20. The details are on Umbra Winery at La Buena Vida Vineyards Facebook page.

Big thumbs up there!