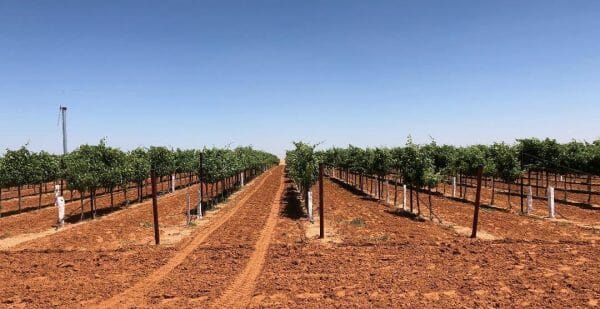 Many Texas wine drinkers don’t realize that about 85% of all wine grapes in Texas are grown on the Texas High Plains, mostly west of Lubbock. Folks are generally surprised to learn that the vineyards producing these grapes are located a 4-6 hour drive from where most of the Texas wineries and tasting rooms are located. During harvest season, usually late July through late September, a LOT of trucks and trailers are rolling down Texas highways hauling grapes and grape must to be processed by wineries in the Red River area, Central West Texas, and the Texas Hill Country. After enjoying a wonderful 5-day adventure to the Texas High Plains where the 2018 harvest was just beginning, it seemed like a good idea to address this long-distance relationship between most of the Texas grapes from the High Plains and most of the Texas wineries and tasting rooms to the southeast.

For the state of Texas, the High Plains is perhaps the most optimum area in which to grow wine grapes. The Texas High Plains AVA (American Viticultural Area) was officially designated in 1993 and is the second largest AVA in the Lone Star State (over 8 million acres). The Texas High Plains region ranges in elevation from about 3,300 to 3,700 feet and is part of the great central plains of the U.S., stretching southward from the Dakotas through Nebraska, Kansas, and Oklahoma.

The weather on these elevated plains has a significant impact on growing grapes. Winters are typically cold with a number of days below freezing temperatures. This sets the grapes up for their burst of growth in the spring, sort of like tulips or peaches that need an optimum winter cold period in order to bud, blossom, and produce in the spring and summer. The downside to these cold winters shows up as “winter kill” in the vineyards where vines are either damaged or killed by the cold. Vines that are damaged are usually pruned back to sturdy, older wood, or even cut off near the ground in order to grow a new trunk. There is ample evidence of this throughout the High Plains, especially in vineyards located further to the west at higher elevations. Vines that die are usually replanted and vineyards with younger vines interspersed among older vines certainly tell this story. These cold winter setbacks obviously have a negative impact on the productivity of the vineyard and require more effort from the grower, but that is just part of viticulture on the Texas High Plains. 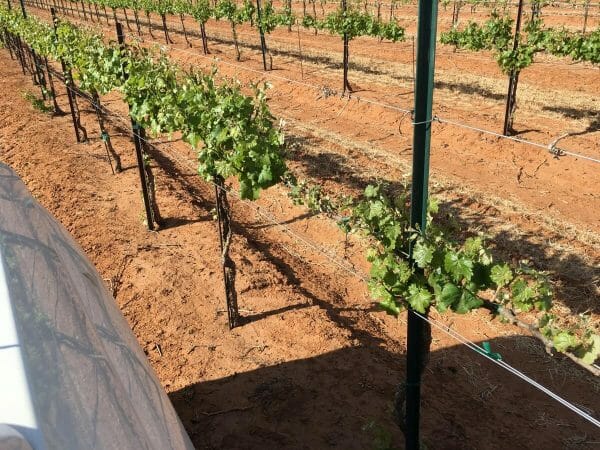 Some aspects of High Plains weather are very positive for grape production. Warm summer and early fall days with lots of sunshine support photosynthesis which is key to ripening grapes. Note that grapes get more sunlight at higher elevations and this promotes very efficient photosynthesis. Most grape varieties can be ripened to optimum levels of sugar and flavor content in the brilliant Texas High Plains sunshine. 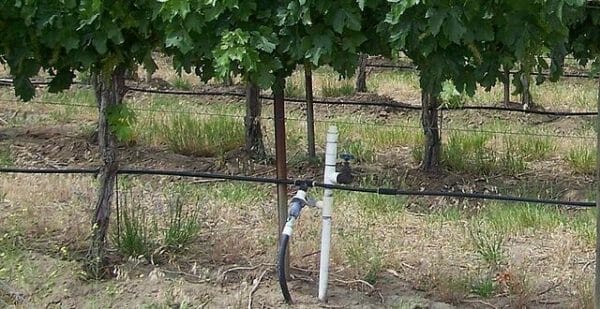 Because of the natural arid conditions, the High Plains are part of what some call the “Great American (Central) Desert.” There is little natural rainfall, and crop irrigation was necessary to establish efficient agriculture in the area. Wind is a common factor on the High Plains as it blows across the land almost every day, sometimes with significant force. You may have heard stories of the “Dust Bowl Era” that crippled growth and agriculture on the Texas High Plains. Well, it’s not surprising that this could happen given the sandy, dry soil and windy conditions. Today’s farming practices have advanced to better keep soil from blowing away and maintain effective irrigation. This is good for the grape farmer as the dry winds help keep moisture from building up and remaining on vines long enough to promote mildew and fungal disease development in the vineyard. Limiting fungal disease pressure is a very positive factor for viticulture in any area. 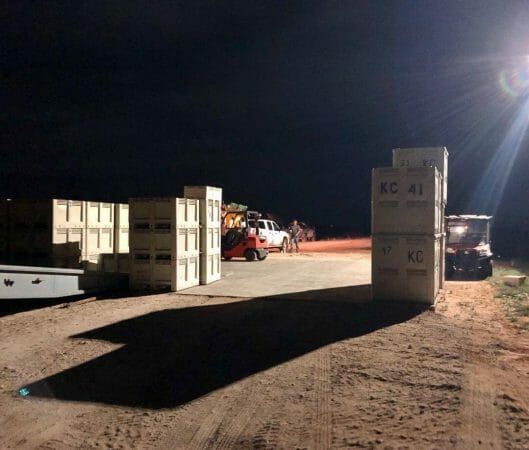 Typical Nighttime Harvest Scene – Picking grapes while it is cool

Another positive weather factor, or perhaps more correctly called a climate factor, is the relatively large diurnal temperature change from a warm daily high to a cool early morning low. This cool-down allows grapevines a period of rest when the plant’s natural chemistry can rebalance, enhancing sugar and flavor integration in the grapes and better distributing carbohydrates for healthier vines. The large diurnal temperature difference also helps vines and grapes to maintain the natural acidity that is needed to produce quality wines. If the vines stay warm overnight, they tend not to rest but rather continue their biological activity, even in the absence of photosynthesis which can occur only in sunlight. The most significant impact from such nightly activity is that the vine will begin to consume malic acid, one of the key natural acids in grapes, rather than the normal sugars and carbohydrates produced by photosynthesis. The result is a lower overall acidity in ripe, harvested grapes that will almost always require adjustment in the winery in order to produce a well-balanced wine. 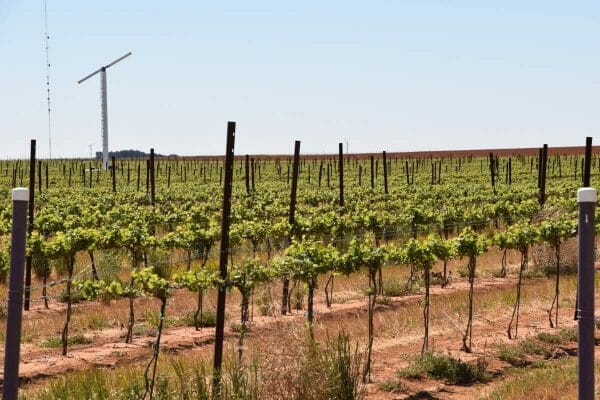 Another negative weather aspect to growing grapes on the Texas High Plains is the issue of early spring freeze conditions that can damage or destroy fruiting buds and early leaf growth. It is actually rare that the High Plains escape any spring frost damage, and those vintages are certainly celebrated. There was massive loss of fruit, estimated between 70-90%, in the 2013 vintage due to several spring frost episodes. Most Texas wineries were forced to purchase fruit from California and Washington in order to produce enough wine to keep their tasting rooms open and fill valuable retail shelf space. Since 2013, many grape growers have purchased and installed measures to combat these spring frost episodes. Large wind machines help to push warmer air from above into vineyards, displacing colder air near the ground. Furnaces with blowers can be positioned to warm the most vulnerable sections in a vineyard. And, small gas heaters distributed throughout a vineyard can keep temperatures from reaching damaging low levels. All of these measures are expensive, but then so are the grapes they protect.

Summer hailstorms also pose a significant threat to the grape farmer. Hailstones can batter leaves and stems, and damage developing fruit, limiting both quantity and quality. Based on success in vineyards in Bordeaux, France, experimental use of hail netting in Texas has been recently employed. Just this spring, hail netting over some vineyards near Brownfield in Terry County prevented grape and vine damage during a significant hailstorm. This is another preventative measure that is expensive and requires extra effort, but the grapes saved can make it worthwhile. 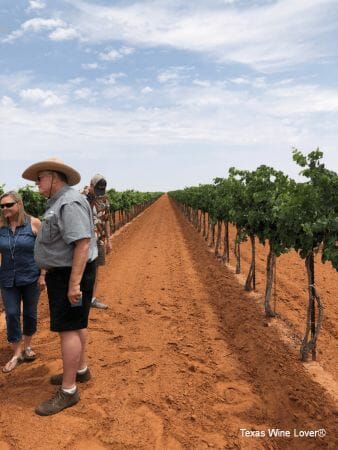 Texas High Plains soil-types are also important to growing good grapes. Much of the topsoil is either sandy-loam or loamy-sand. Below the topsoil layers, limestone or caliche are often found. Many areas exhibit soil that is deep rusty red in color due to high iron content. These loosely structured and relatively low vigor soils allow for good root development that can better sustain vines in the arid environment and produce better fruit. These soils also allow for efficient irrigation and nutrient delivery via overhead drip or underground delivery systems. Irrigation is critical to growing grapes in most parts of Texas, and so long as water is available in the underground Ogallala Aquifer, agriculture will remain a key part of the lifestyle and economy of the High Plains. Since grapes require less irrigation water than most other crops commonly grown in this area, many farmers have established vineyards to augment their overall agricultural portfolios.

A side note regarding soil type relates to the dreaded root louse (insect) known as phylloxera. These root-sucking insects related to aphids, are native to North America and were responsible for devastating European vineyards in the late 1800’s-early 1900’s. After explorers took native American grapevines back home for planting, phylloxera began to spread. The primary impact of phylloxera is to cut off the flow of water and nutrients from the roots to the rest of the vine. This wreaked havoc on European vines that had not developed a natural immunity. This led to an intense period of research to find a way to minimize or eliminate the impact of phylloxera. One of the key results from this research came from the Lone Star State when Thomas Volney (T.V.) Munson (of Denison, TX) learned that grafting European vine budwood onto phylloxera-resistant native Texas rootstock was an effective method to combat phylloxera. Today, most grapevines around the world are grafted onto American, often Texas, rootstock that is phylloxera resistant. Read Munson’s story in Wikipedia as it provides a pretty good version of what happened. So, what does this have to do with soil? Because phylloxera does not like to be in sandy soils, much of the Texas High Plains provides a “naturally” resistant place to plant grapevines, even some that are own-rooted and not grafted onto resistant rootstock.

Texas High Plains topography is also a contributor to establishing and managing vineyards. The land is generally void of native trees and quite flat with only small changes in elevation across large expanses. This has led to the development of efficient farming practices where large-scale agricultural equipment is employed for cotton, grain, peanuts, soybeans, and now grapes. “Big Ag” practices make it possible to farm larger vineyards more efficiently and economically than can be done in many other parts of the Lone Star State. As in major growing areas of California and Washington, mechanical pruning, weeding, de-leafing, spraying, and harvesting are common practices for the Texas High Plains grape grower. 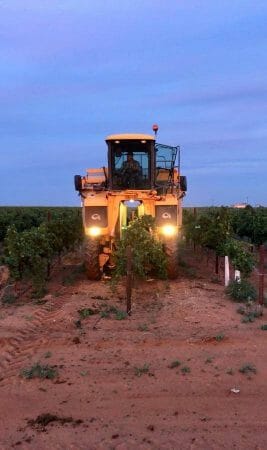 The key goal of this post is to highlight our dependence on grapes grown on the Texas High Plains to support our burgeoning Texas wine industry. It is important to understand the reasons why so many of our vineyards are located on the High Plains rather than nearer the majority of wineries and tasting rooms in the more central part of the state. And finally, there needs to be an appreciation for Texas grape growers and the trials and tribulations they endure to provide grapes that produce the Texas wines we enjoy. Just remember, without dedicated farmers, there would be no grapes, and thus no wine.

Note: A future post, Part Two of Texas High Plains Vineyards, will cover some interesting and different vineyard practices that growers employ to provide quality fruit to the industry.